Well, Lucy’s officially joined the rest of the world in the ten-toe club. She got her eleventh toe removed yesterday morning. We were actually kinda sad to see it go…we’ve grown attached to that little thing. Here are the last pictures we got of it… 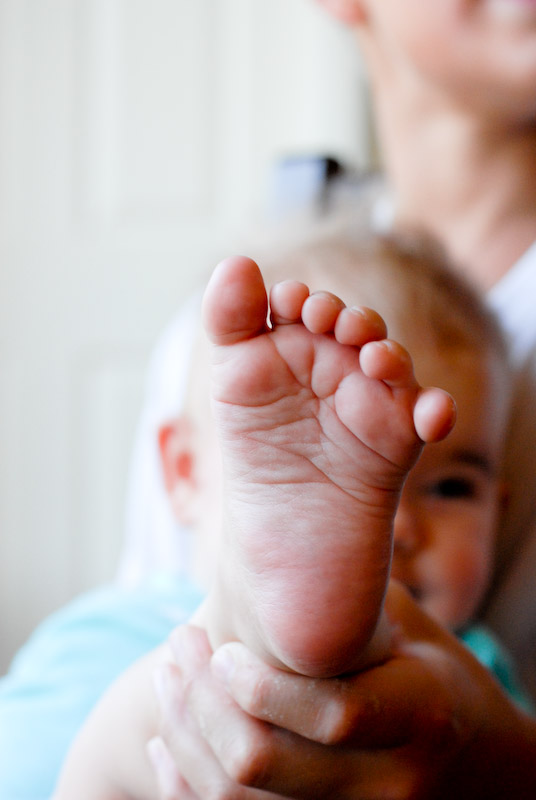 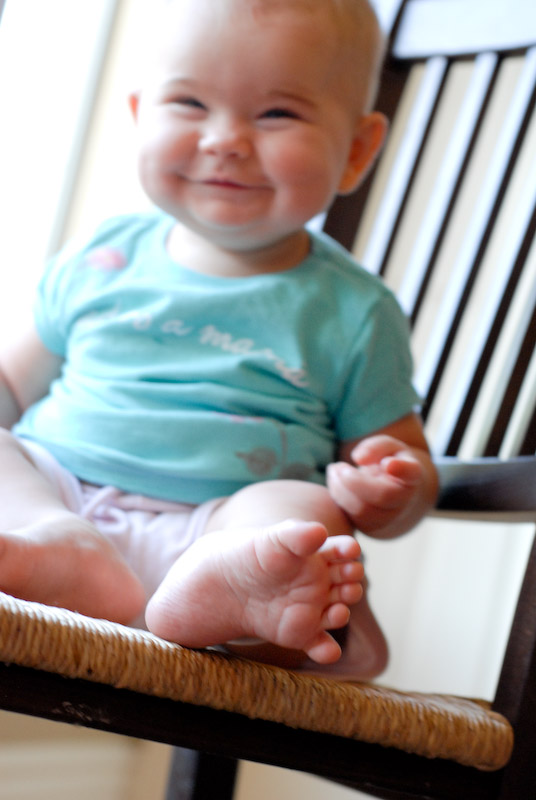 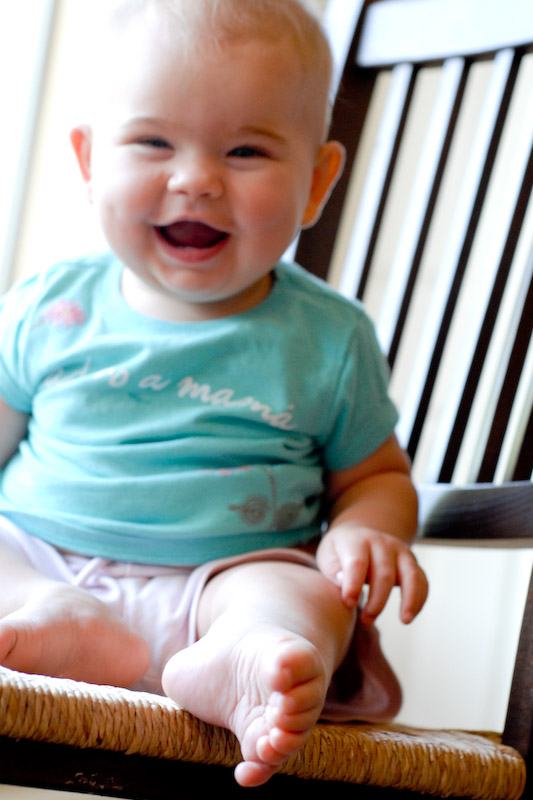 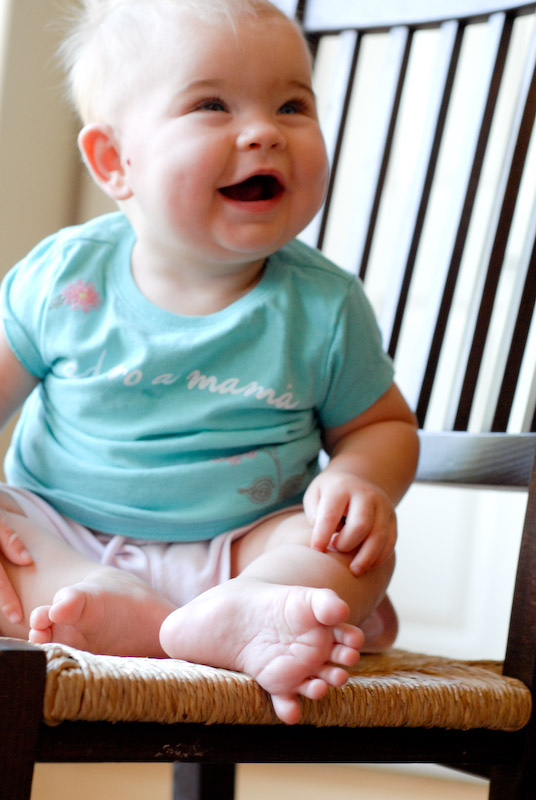 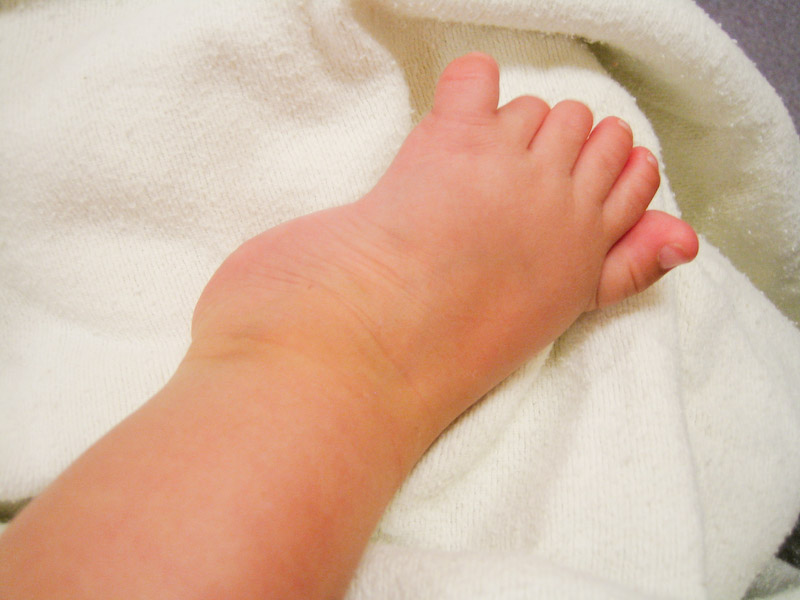 But it was time. It started turning all crooked and backwards when she sits and stands (while holding on to furniture), and she’s at such a good age to not have it phase her too much. What an amazing baby…she was SO good in the hospital and even now, she’s kicking around her humungous bandaged foot with a big smile on her face like nothing ever happened. Julie (Dave’s little sister) and her kids were staying here and she offered to stay with our kids so Dave and I could go to the hospital together which was so nice. We had to be there at 5:30 am, the surgery was at 7:30, and we were home by around 9:30. I made tons of calls the last few days to make sure everything was all set and that this doctor is really all he’s cracked up to be and to find out who the anesthesiologist would be and to make sure they were going to try to make the left foot as symmetrical to the right as possible after removing the toe. We were pretty nervous. It was so sad to watch the nurse take our precious little baby away in a hospital gown and cap (it’s a good thing the cap was pretty darn funny and made me laugh so much to take away some of the trauma). Anyway, she did awesome and all is well. Here are some before and after pictures… 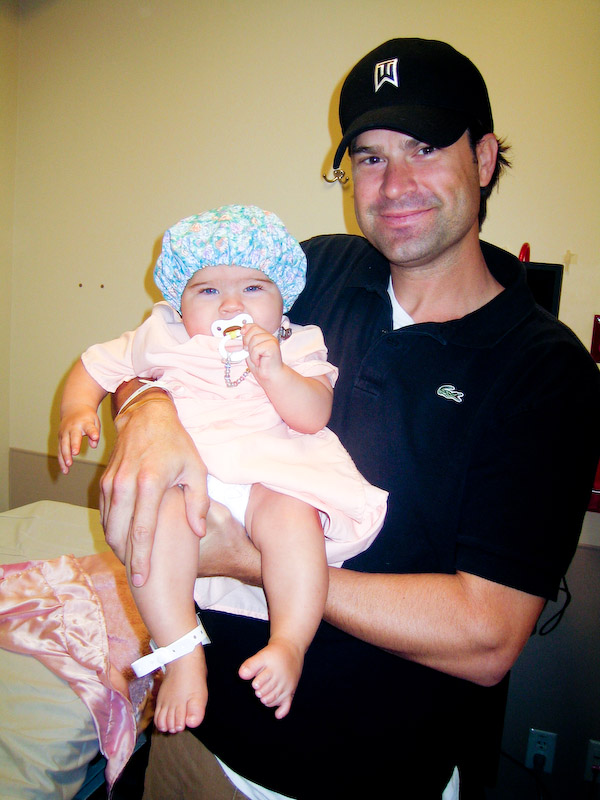 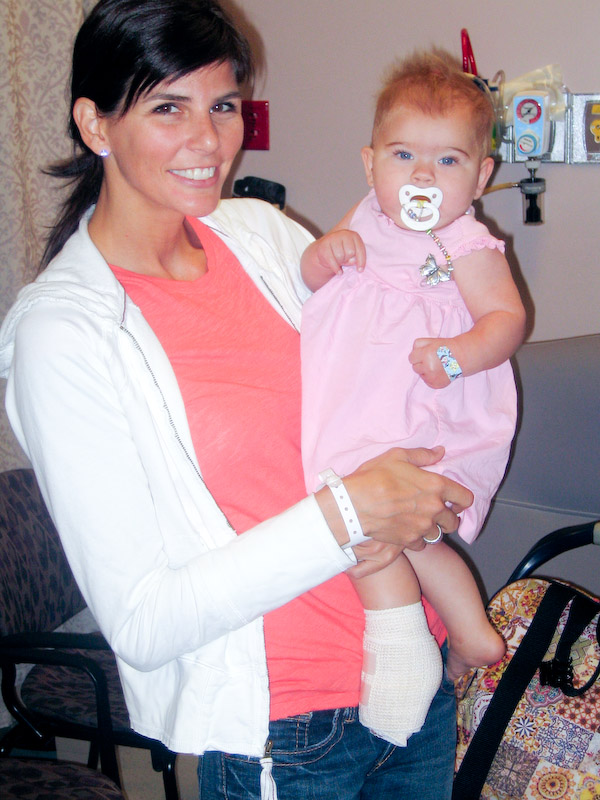 Julie had the kids clean the house from top to bottom while we were gone and the kids had all written little cards for Lucy and some friends had brought over some “get well” balloons and some stuffed animals for Lucy. You should have seen all eight kids (Julie’s included) run out to the garage as soon as they heard us driving in and pack themselves in around that baby to take a peek at the new foot. Too bad for them that we have to leave the bandages on for 48 hours before we can see the finished product. They were SO excited about it all. Claire tells everyone we talk to that “we just cut Lucy’s toe off”…complete strangers raise their eyebrows a little at that. 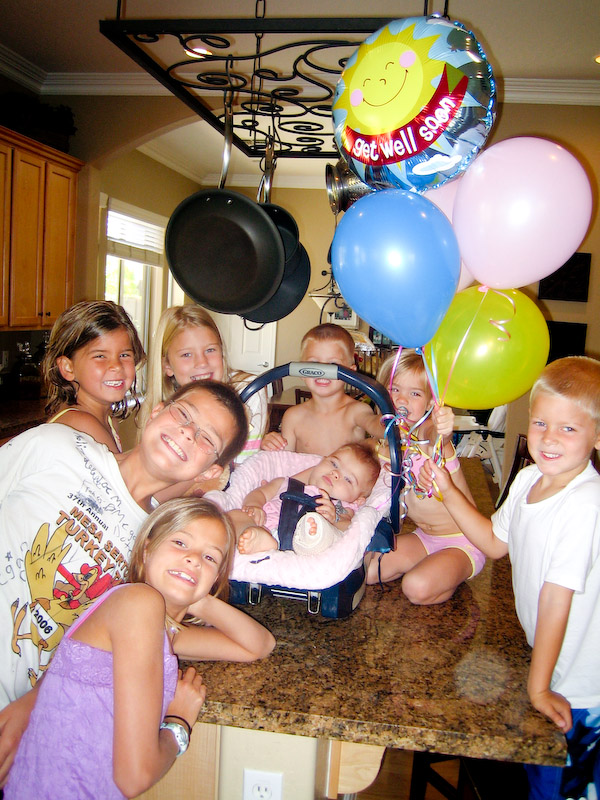 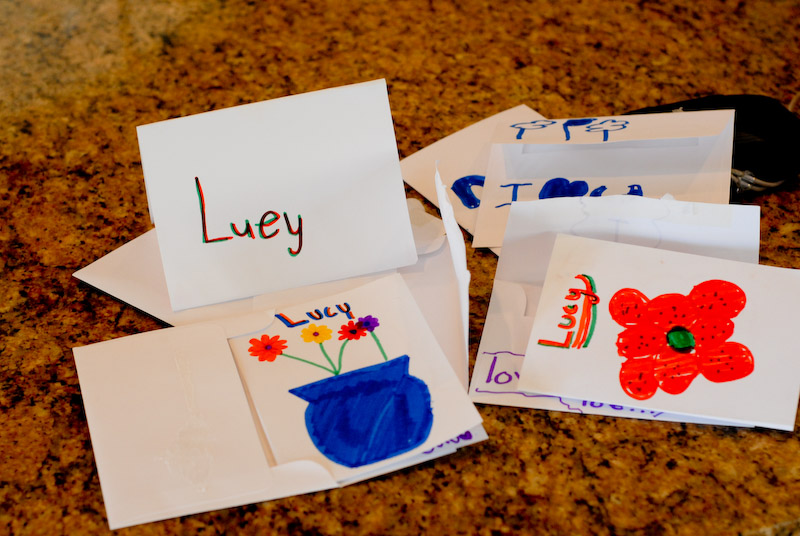 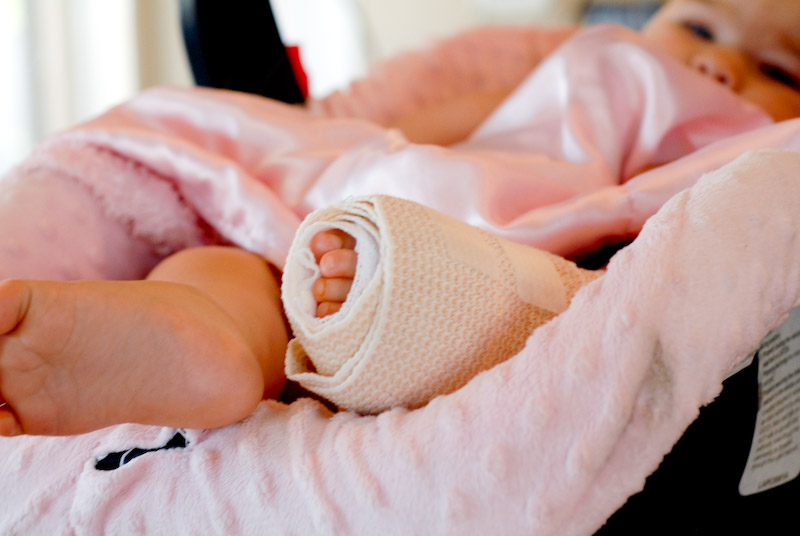 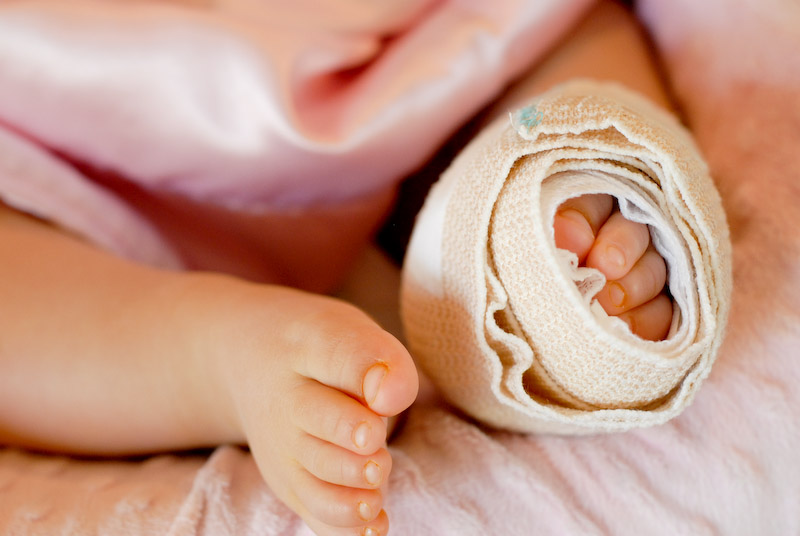 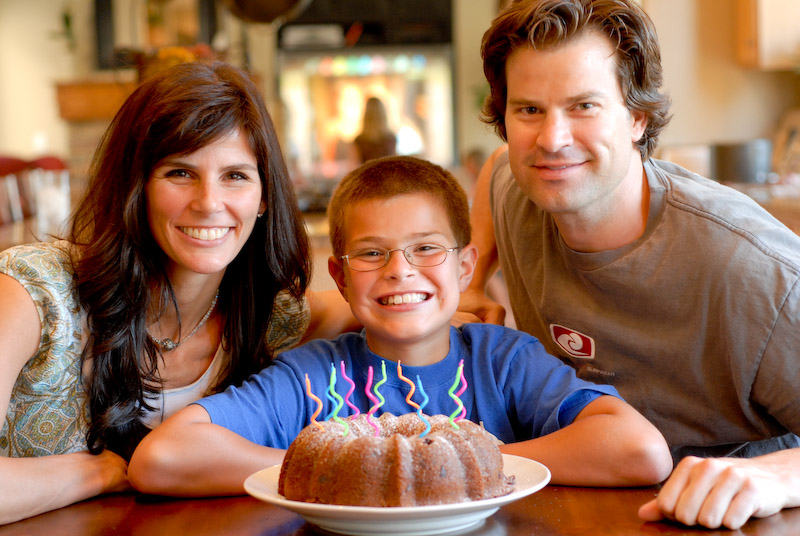 In other news, Max turned TEN!!! I can’t believe my baby is ten. We had the Parkinsons staying with us for the big day which made it extra fun for him. (That and the fact that we fasted last Sunday for Dave and his kidney stones so that he wouldn’t have to fast on his birthday—the dread of all dreads in his mind.) 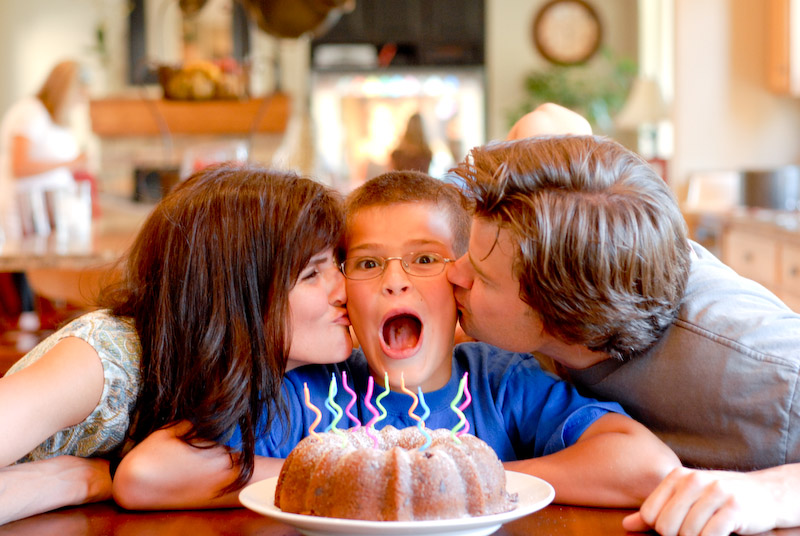 Dave and I were suckers and bought him a Nintendo Wii that he was dying for for Christmas and that was the hot item no one could get. 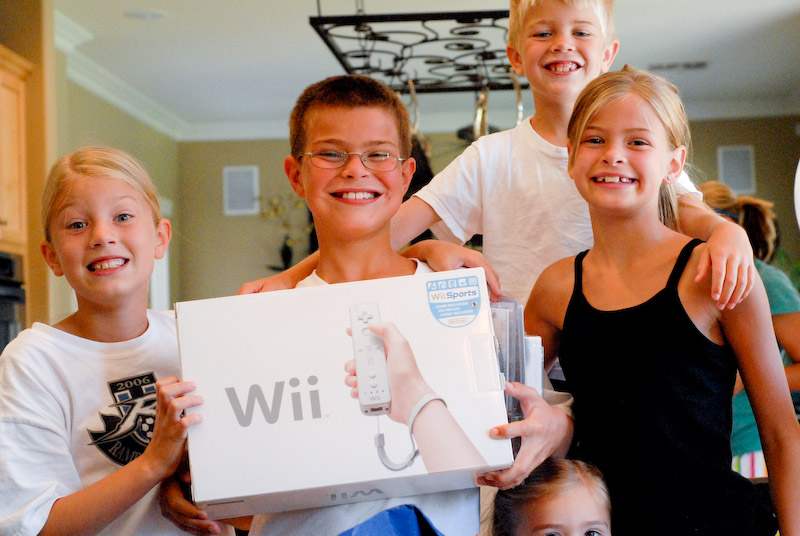 We figured since he really and truly only asked for socks, he should have something really good. And man did he ever like it. It’s kind of an interactive kind of game thing like Play Station and the others…you stand up and actually bowl or play tennis or baseball, etc. with the little joystick thing. All eight kids in this house all week have played it non stop and I’m ready to be done with it for a while! 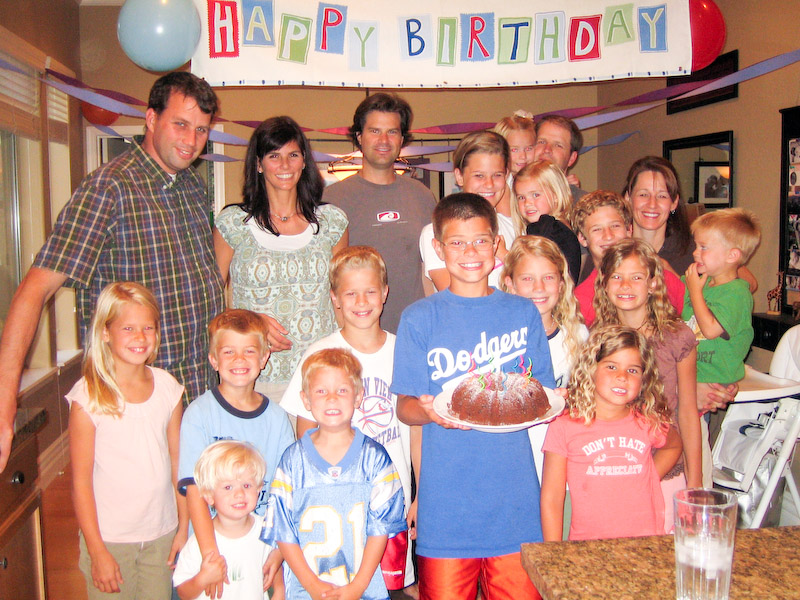 We looked through all Max’s old baby books and reminisced about how amazing this kid has always been. We are so darn lucky to have him. It’s an off-year for birthday parties so we just invited all the cousins over for cake and ice cream, and of course, Wii play.
I wrote a poem about Max a few months ago I’ll post to remind me of how he is right now:
MAXWELL DAVID
Max
My “little” boy
My one and only
Looking at me over the top rims of his again fingerprint-covered glasses
Modest, slow, closed-mouth smile that I love
Shooting basketball shots from crazy distances every day in our driveway
A good, quiet friend, to the neighborhood kids,
And to his four sisters
Gentle and patient
Especially with Lucy
His eyes gleam as he plays with her, looks for her after school, shows her off to his class
So proud and sensitive of all those sisters
Who adore him
As he adores his dad
Will do anything for him, to please him
How I hope he’ll do that for his Heavenly Father as well…
A strong hitter in baseball
Very consciences
Perfect handwriting
Usually overly concerned about school work
But this year, (is it the teacher? Is it the age?) he’s suddenly nonchalant
I find work un-finished
Scrunched in his backpack
Amidst drawings and large, artistic bubble words with shadows
But he still gets straight A’s
A “Golden Scholar” on the Principal’s List
Quick wit
Catching on quickly to his dad’s sarcasm
And melding into a solid Suns and Jazz fan…
soaking in time with Dad and uncles to watch the games
Makes us breakfast
Lumbering run
His agility still trying to catch up with his tall body
People think he’s almost a teenager,
When he’s still nine.
Still now and forever
My baby.
My boy. 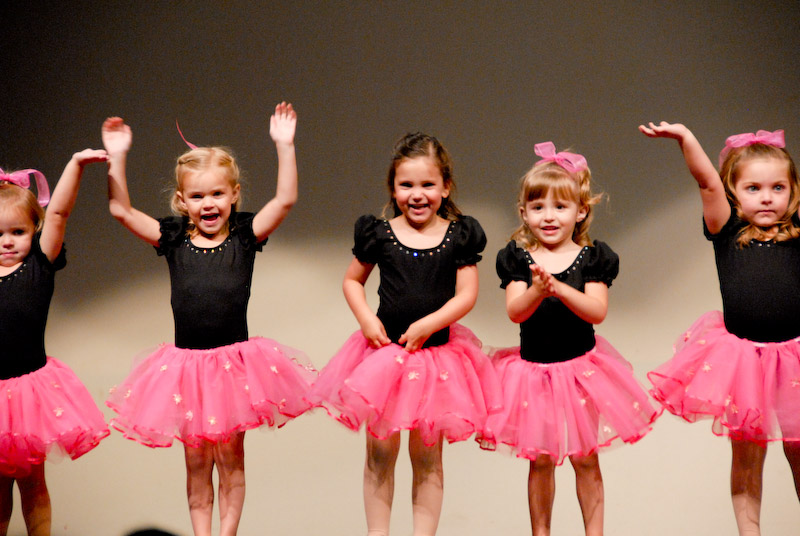 Claire had her big dance recital this last week and she was so cute and so excited about the attention. I have been so excited to be done with dance…I’m not a big fan of the skanky outfits and crazy moves they think little kids have to do (not Claire’s class but pretty much all the other ones), and I’m not even that conservative. But Grace came along and her eyes glowed as she was glued to each and every dance. Now she’s dying to take dance classes again. We’ll hope she forgets about it by the Fall. 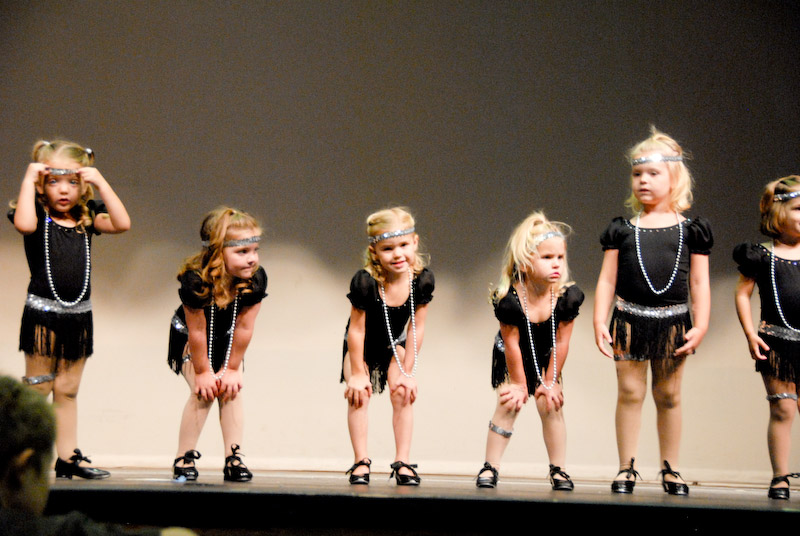 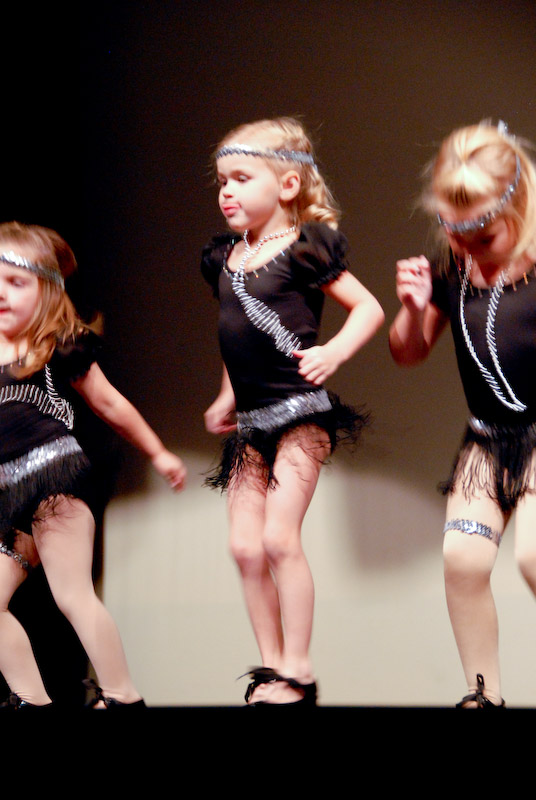 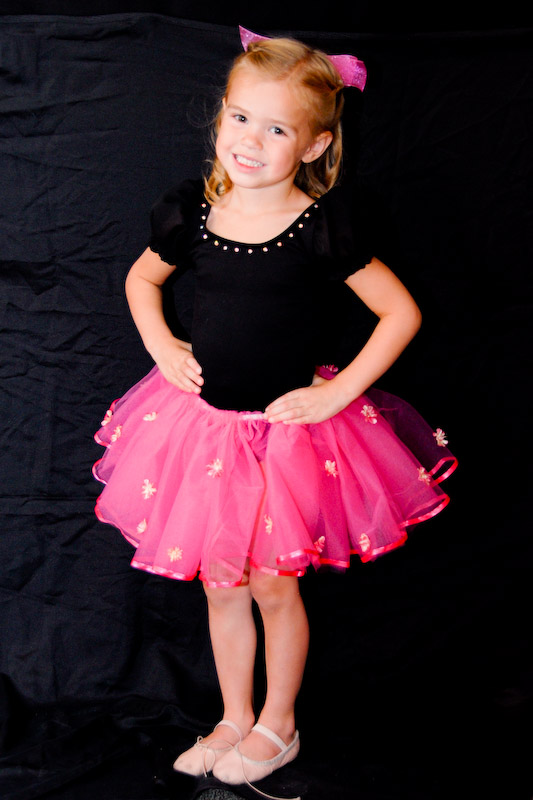 Max had his piano recital this week too…he did so well. He’s learned so much in only nine months! 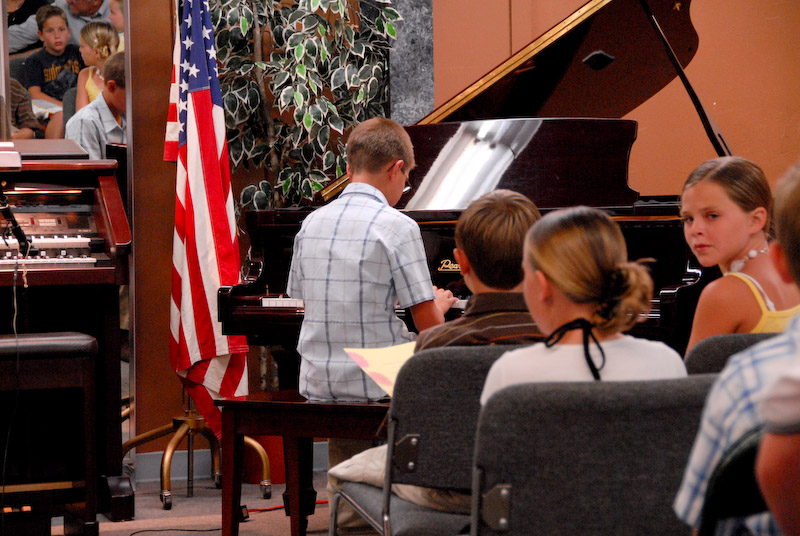 Summer is crazy and I’m finding I’m looking forward to Bear Lake even more than ever. My kids are too over scheduled again…swim team and another camp thing that my friend signed them all up for plus cub scout day camp, basketball camp, volleyball camp…we can’t find a minute to fit in fun. Just kidding, but I do wish I would have drawn the line at swim team and kept them home to just hang out the rest of the time. This next week we’ll get serious about a good summer routine, setting some good summer goals…get them reading and doing their summer math stuff and practicing again. 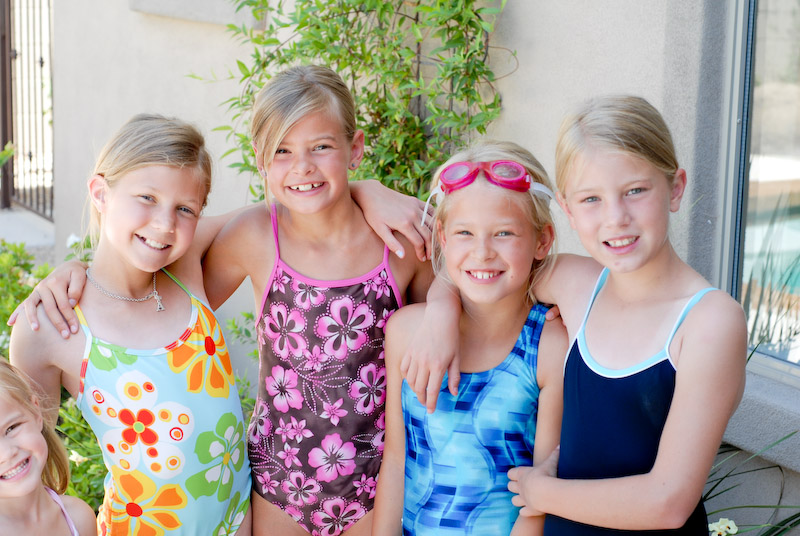 We’ve loved hanging out with the Parkinsons this past week. The kids all get along so well. We did tons of swimming, some sleep-overs with all four families, eating out, shopping, etc. I forgot my camera for a lot of the stuff we did so I’ll send more pictures when I get copies from Julie. Man we love those guys. We already miss them but I must admit it sure feels quiet and calm around here now!!

I wish I had one hundred rooms

a persistent (and awesome) way of learning the...

hundreds of voices singing their hearts out

a special blessing for Lucy

well done shaser. man you have really got the blogging down. i think you should just put big pictures in there so when we click on them they will just come up huge on the screen. it was so great to see the toe before it went the way of all ectra toes. you guys are living the dream.

Shawni-
Could you be more perfect. Everything you do is amazing. I wish I had a fraction of your talents. You blow me away. It was fun to see you last week amongst the chaos. I always wish for more time together, but it gets hard. There is also so much family to go around. Thanks for having us at your poot and crash the party. It was also fun to see David this trip. Hope he is doing better. Sure love you. Take care Heather

Hi, I just stumbled onto your blog. I have 8 children. Our last baby is a girl, she's 2. She was going to be named Lucy until the drive to the hospital when we changed the name to "Ellen Lucille". Our ellie was born with 12 toes, on Oct 27, 2009. Im coming back to read more, I unfortunately have to write a paper so I dont have time to read now. We think Ellen has tethered cord, but arent sure. Im so sorry about your Lucy's diagnosis. Ill be in touch with pictures too. Melissa Dayton

I read about you on Vintage Revivals "Blog Crush" post & had to come & see you. I enjoyed my visit. {Of course I had to read how your blog got it's name – so clever!}

I just found your blog, how sweet is that baby girl of yours! I have three girls and a grand baby girl on the way.(makes me feel old at 44)
I love the blog! Your photography is wonderful.
I am new to blogging and pray mine looks as good as yours one day 🙂