Home pets In loving memory of Gabby the hamster
pets

In loving memory of Gabby the hamster

Gabby the hamster joined in as the newest member of our family yesterday. We went to pick her up at Petco as soon as my kids knew it was open and after probably one hundred of these: “PLEASE can we go now? Is it time yet?” En route to the store the kids were quite seriously engaged in a discussion of the important matter of the name of their new pet. Teddy (as Max had dubbed her the night before) somehow didn’t seem right after a good night’s rest. She was a girl, and therefore needed a more girly name. By the time we reached the store the name had been officially decided as “Gabby.”

Gabby was an awesome pet for a little over twenty-four hours. She was calm and sweet and let every kid in our neighborhood manhandle her over and over and over again. I think every single one of my kids’ closest friends not only got to meet her but got to hold her and snuggle her. They were just seeping in yesterday to get a peek. Elle and her friends even made up a play with her as one of the stars. We took her on a field trip to the park this morning to meet even more friends. She was pretty darn popular. She never bit anyone as the pet store lady assured us she would until she got used to being held. The kids were begging to bring her to the Grand Canyon with us tomorrow because they couldn’t bear to leave her for two days. (It’s Fall break and the kids are out of school all week.)

But poor Gabby died today after one of Max’s friends accidentally stepped on her. Is that sad or what? Oh man we are sad and a little traumatized…over a hamster! I watched her die though after Max called me upstairs in alarm and let me tell you, it’s a little traumatic to watch a living thing die in pain. (Much worse than when our goldfish of two days died years ago…I had a tough time with that one too and it was a darn goldfish.) Elle and I had a good cry over it and she and her friend have been making eulogy books for her ever since, writing the “story of her life.” Grace and Claire are gone to their friends’ houses and don’t know yet but I’m sure they’ll take it pretty hard. Man, I have no idea how people who have family pets (big deal pets like cats and dogs) for years get over it when they die. I’m not a pet person but I saw the look in my kids’ eyes over and over again and watched them with her and fell in love with her because she worked her way into their hearts so darn fast.

We’ll hope the next one will be as nice. 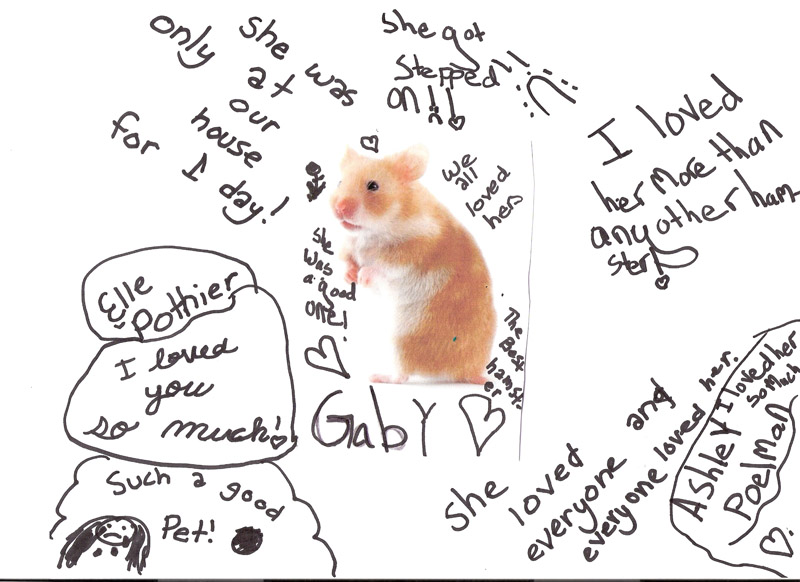 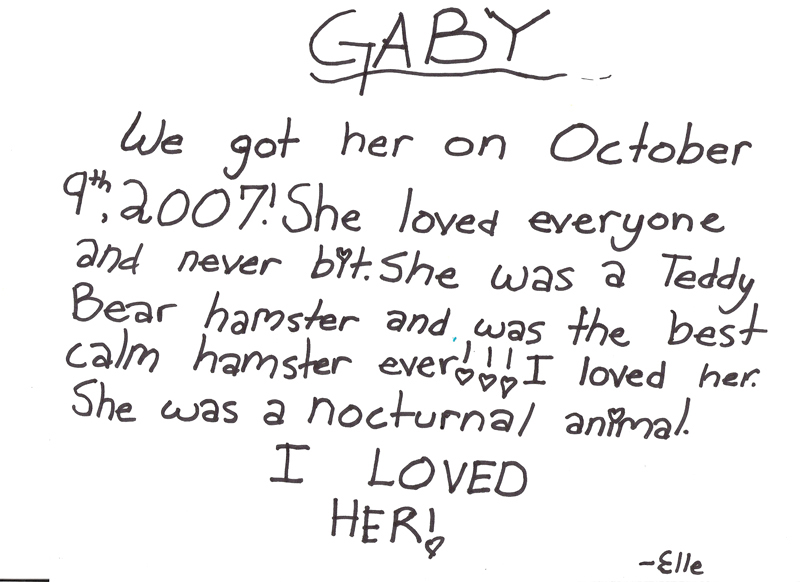 Now it’s later…the kids sniffled themselves to sleep tonight, Grace claims she doesn’t want another hamster because none of them could be as good as Gabby.

goodbye to Lilly the hamster

goodbye to our beloved Sea Monkeys

Oh my gosh! That is so so sad!

Oh no!! I hope you guys have better luck with the next one! It sounds like a day full of drama!

I think that’s the saddest thing I’ve read! We actually lost a hamster from being squished w/ bare hands (not pretty)…another one had a couch moved on top of it. We like turtles at our house now 🙂 I hope your next hamster is just as nice as Gabby was.

Oh, no! That’s so sad. I lost my first hampster, muffin, when my friend lost her balance on a stool and threw her at the wall. She died in my hands and I cried for days. She brought me a new hampster, muffin 2, and that one stunk! She always got out of her cage for days at a time, once climbing into my mom’s wedding dress and eating her way out…yeah. nice. She bit all the time and she died two years later because I forgot to feed her. I didn’t have much luck with hampsters, hope your next one does better!

I am Kara’s friend from Dental school. Just stopped by to check out your photography. Love it…doesn’t hurt you have an incredibe looking family….so Kennedyish.

I heard there were a few quick things you can do on photoshop that will make a huge difference in your pictures. Wondering if you get time, whenever, if you could share your secrets? Or where I can find some. I have a Canon Rebel and a great lense- just don’t know what I’m doing with it.

If you would send me your e-mail address I could invite you to my blog. I realize I am a toatl stranger and you are a busy lady…so please ignore this if it is too presumptious (sp?).

p.s. What are the chances the Hamster dies the day you get it…that must be some kind of record….so sorry.

Our thoughts go out to the Pothier family during this difficult hamster mourning time. At least the mother didn’t eat her babies like I saw over and over again with my brother’s hamsters growing up!

Oh my heavens Shawni that is so sad! I am so sorry. It is simply amazing to me how quickly children became attached to their pets. It was so sweet to read their words about a pet that they only knew for one day.
Sierra still talks about our hamster that died from jumping off the top of the swingset with her. It was so traumatic!

But, we did by the “almost perfect pet”, our guinea pig, Coco, and it survived a major fall and is a super pig. Seriously Shawni – it survives even with the entire neighborhood full of kids wanting to just “love” it. I am all about promoting guinea pigs.

I hope that your kids are doing better Shawni. What little sweethearts!

I can’t even believe that story.Do we know for sure if this boy stepped on Gabby on accident or on purpose? I am not sure how he could step on a hamster. Your poor kids. How very traumatic for them. Have fun in the Grand Canyon.

So sorry for your loss. I know how hard it must be for the kids.

Oh sad! I can feel your pain though…I used to have a baby chicken and Heather accidently stepped on it when I was at school when we were both young. I was devastated! Heather felt sooooo bad. Soooo sorry! Better memories to come though!

Jonah just died from being stepped on by laughter, drool and tears. We are so sorry for your loss, but I know that no hamster has ever brought so much happiness through its untimely death. She was a nocturnal animal.

Thanks you so much for recording this. Even though I am not kidding about the Jonah nearly dying part. I had to come heimlich him.

My cousin lived in Phoenix when he got a hamster for Christmas. We played with it all day. His names was danger mouse. Then my other cousin rocked the rocking chair on him by accident. He died. R.I.P. He was a nocturnal animal also.

OH NO! So sad. I hope you and your kids are ok. That would be hard to watch something living, die. I love all the sweet notes that your daughter wrote about it. What a cute idea.

My mom held my dog (years ago) in the wee hours of the morning as it died and we all just cried our eyes out.