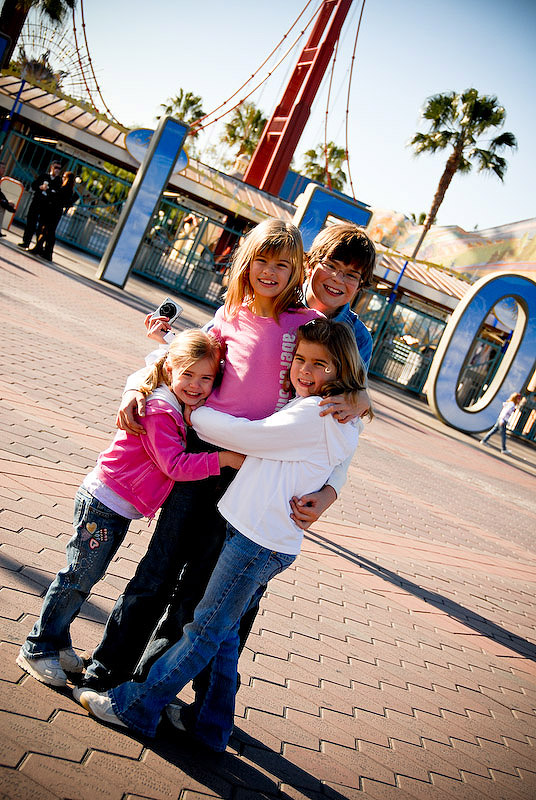 Finally, we made our pilgrimage to Disneyland. This was a long time in the making. We’re not one of those Disneyland families who have the annual passes and go all the time. The last time we went was five years ago and we took Max & Elle and left our then baby Grace at home with her aunt. So this was a big deal for us. We’d been talking about it forever. For about a year and a half we had a deal with Gracie that if she didn’t cry for five days in a row we’d take her to Disneyland. It became clear pretty quickly that we better not make that five days “in a row,” we better just make it five days in general. I still don’t think that ever happened, but finally Gracie matured a bit, and Claire cut down on the tantrums and we were ready. So it was kind of surreal for these kids to be standing there in front of Fantasyland. 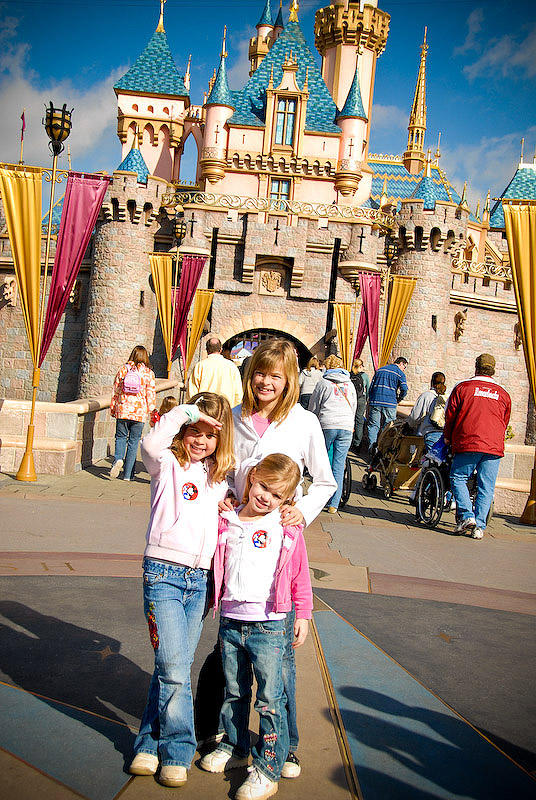 We had SO much fun. And we learned a few things:

1) Some kids love surprises. Some don’t. We (ok, I) was SOOO excited to surprise the kids. I couldn’t even sleep the night before. I made up a big puzzle thing for the kids to do in the car with clues as to where we were going. I had big plans. I’d whisk them out of school right after lunch, they’d be all smiles and glee wondering where in the world they got to go. They’d do the puzzle and shout for joy. Well, my plans didn’t quite work that way. Dave got caught up with things at work and barely got home right before the last bell rang. We scrambled to get over to the school to pick them up before they hopped on the bus to go home. Apparently Max’s teacher told pretty much his whole class while Max was gone to a different class one day but swore them to secrecy. I need to let her know that fifth graders don’t keep secrets very well. By the last recess someone spilled the beans to Max and someone else (or maybe the same “someone”) told Elle. So Max was all smiles when I picked him up and Elle was near tears. She was worried about homework of all things, and we found out her little mind doesn’t do so well with surprises. Grace & Claire were oblivious. But after a little commotion none of them could have had a bigger grins (even Elle) when the puzzle was finished and they realized that for real, they were on their way to Disneyland. So, my plans of grandeur didn’t work out as I had hoped, but hey, it was worth a try. Next time, Elle gets to be in on the secret and the others get to be surprised. 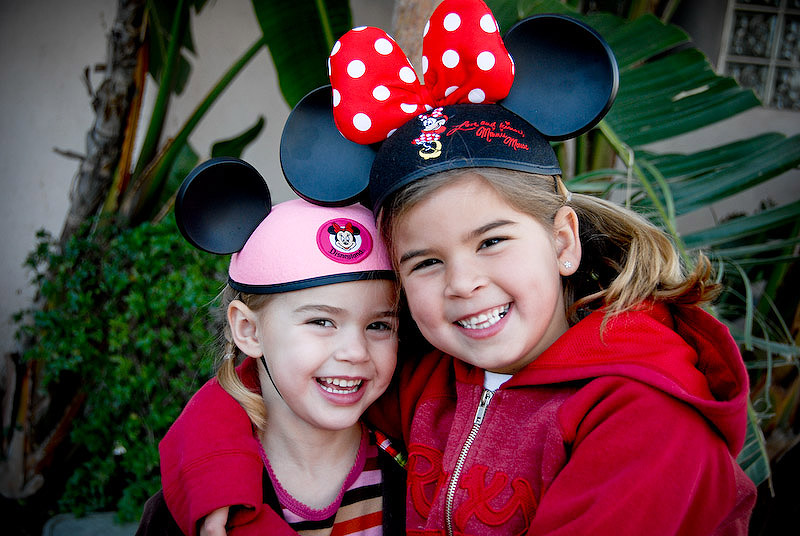 2) It’s a terrific idea to leave your baby with her aunt when you go to Disneyland. Lucy missed out but I’m sure had a much better time playing with her cousins than she would have had being strapped in a stroller wondering why in the heck animated characters kept coming into view and freezing to death at night because her mom forgot to bring a jacket for her. She wouldn’t have done so well wrapping up in our make-shift “windbreakers” we used to try to stay warm (I brought these ponchos for Splash Mountain but they sure came in handy the first night…although Dave was embarrassed to be seen with us). 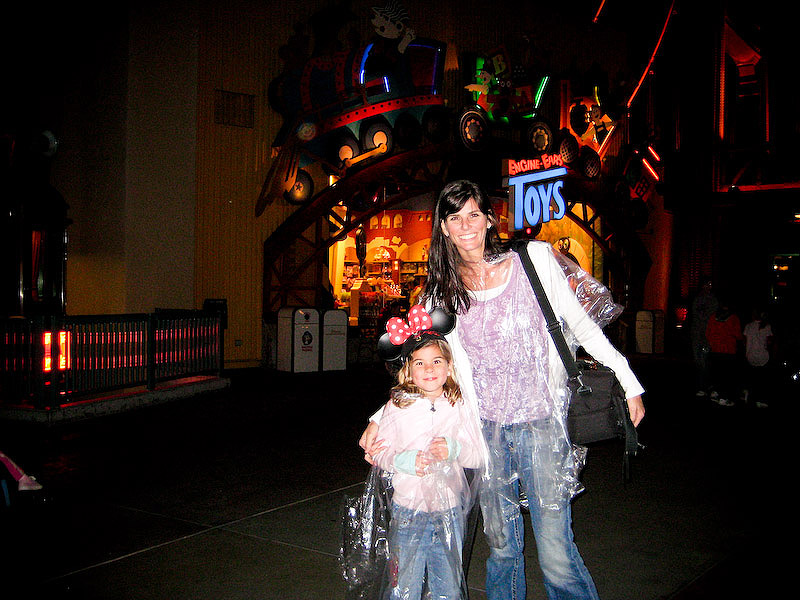 Yep, it was much better for her to stay home.

3) Some like big roller coasters (on the left). Some don’t (on the right). Dave and I LOVE those things. So when we couldn’t talk a single one of our kids into riding with us the first night we abandoned all four of them for a few minutes so we could go ride. 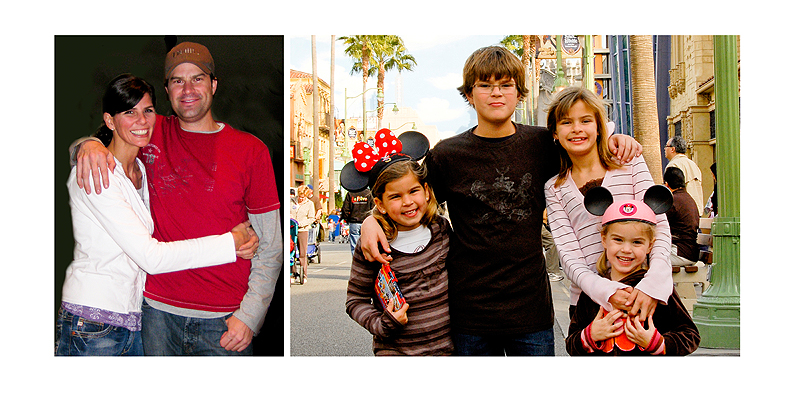 This is my favorite video to show just how much Claire “liked” roller coasters…even this small one in Toon Town:

4) Some kids are just much happier on the “kid” rides. 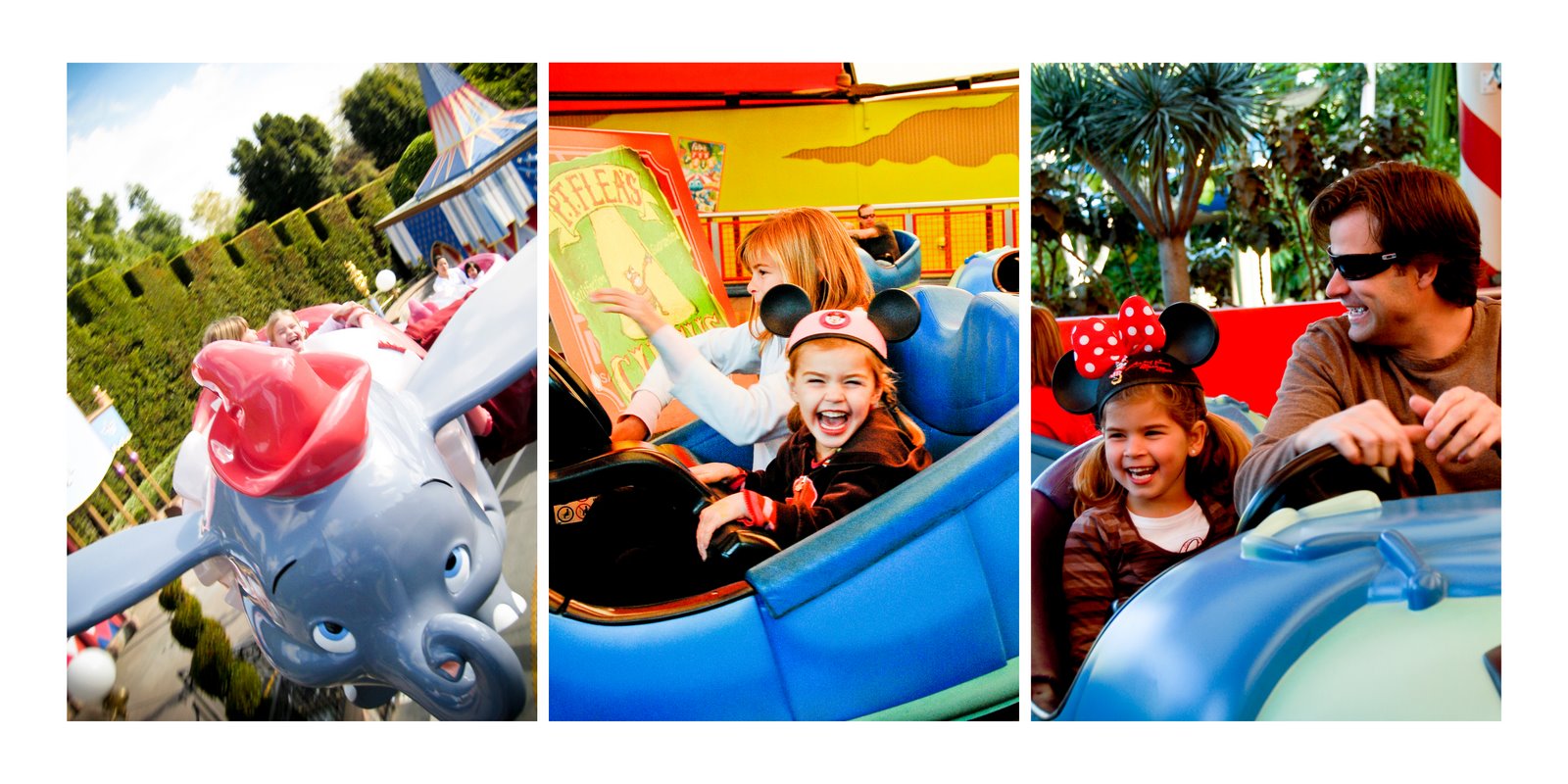 5) Peer pressure works wonders. For part of our time we met up with some good friends who have kids whose ages matched up with our kids. Suddenly our kids dared to do the big rides. And we did them over and over and over again. It was awesome. 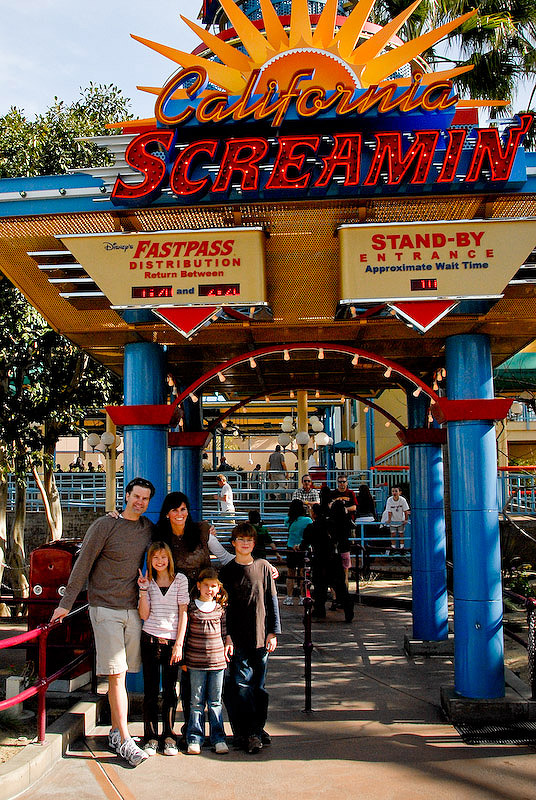 Max still doesn’t look too sure he likes this…

6) January is a great time to go to Disneyland because you can do just that…ride the big rides over and over and over.

7) Some kids don’t give in to peer pressure and are happy as can be to remain only on the “kid” rides. 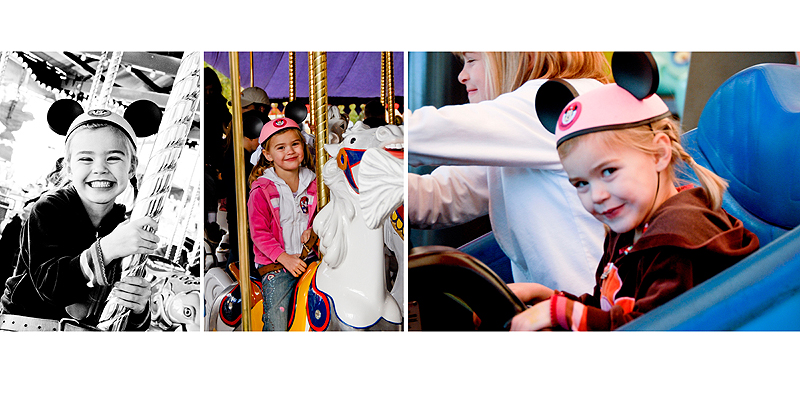 7) Strollers are a very good thing to have at Disneyland. Especially when you decide to walk from your hotel and you go the wrong way and end up walking around the entire back of California Adventure before you realize it and have to turn around. 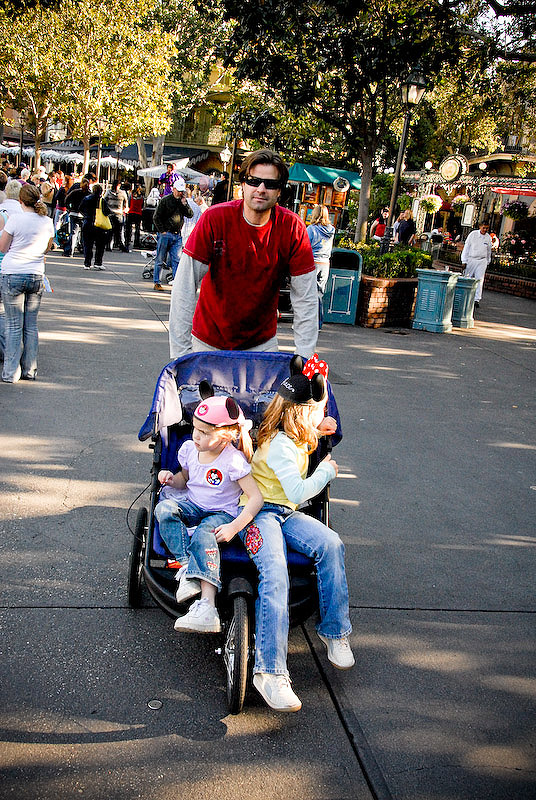 8) Some kids can’t get enough of the characters running around. 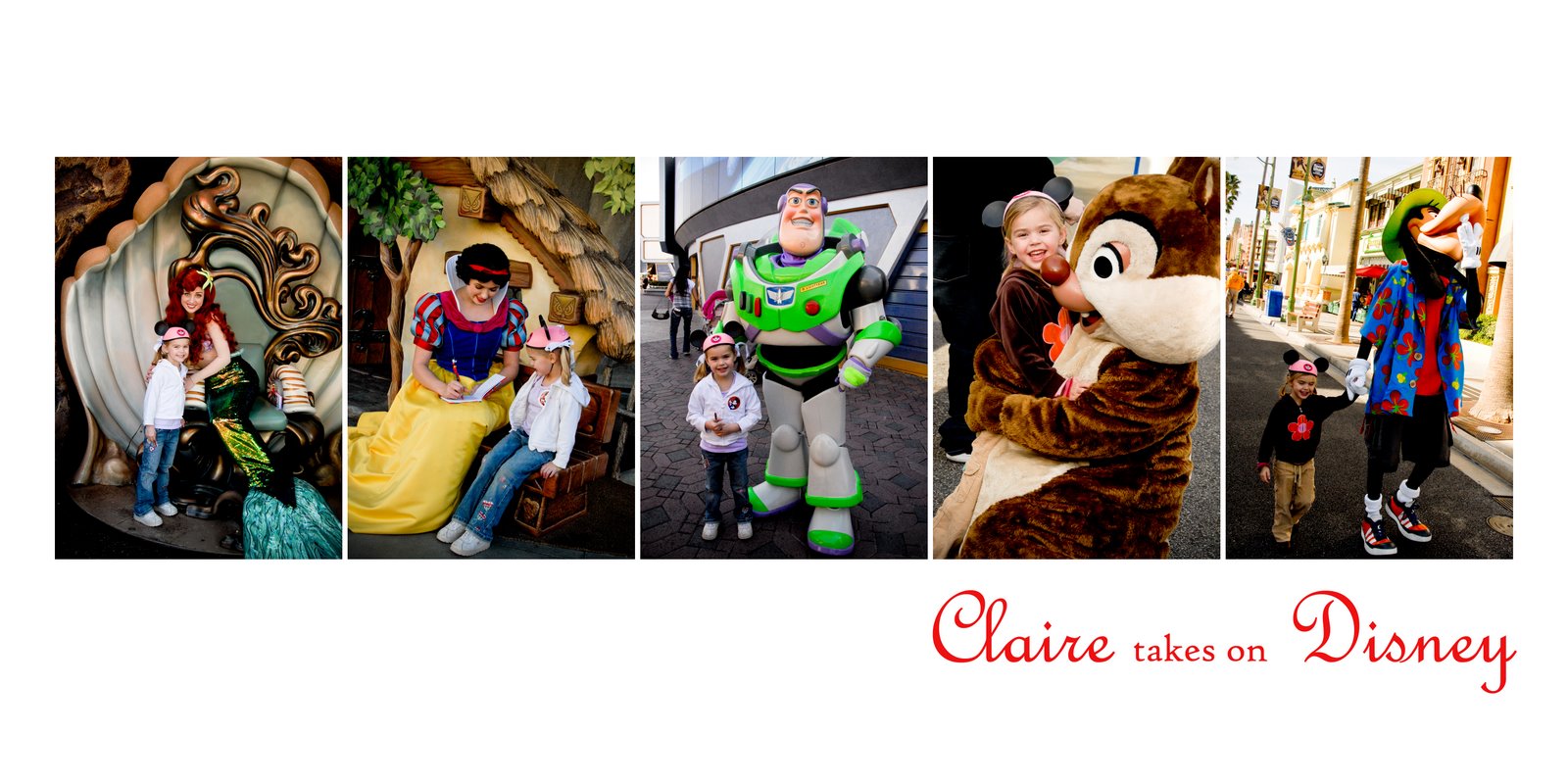 …and others would rather keep an arm’s distance. They are much too “cool” for that! 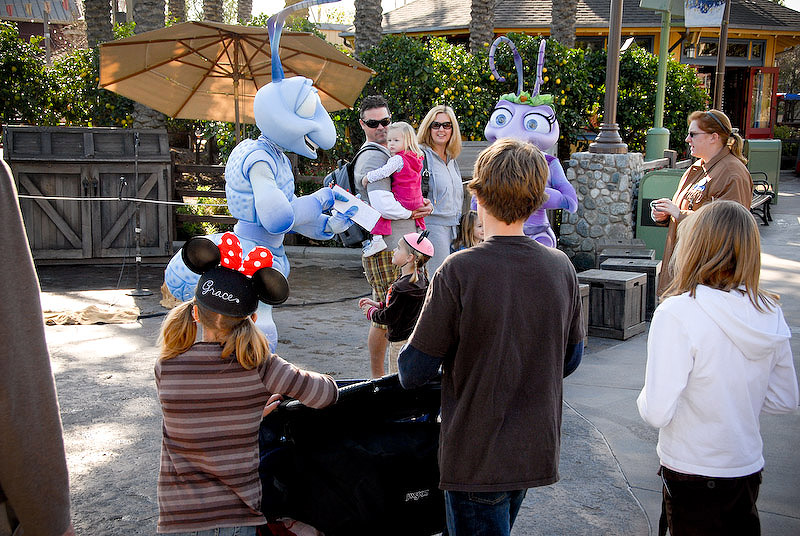 but they warmed up by the end. 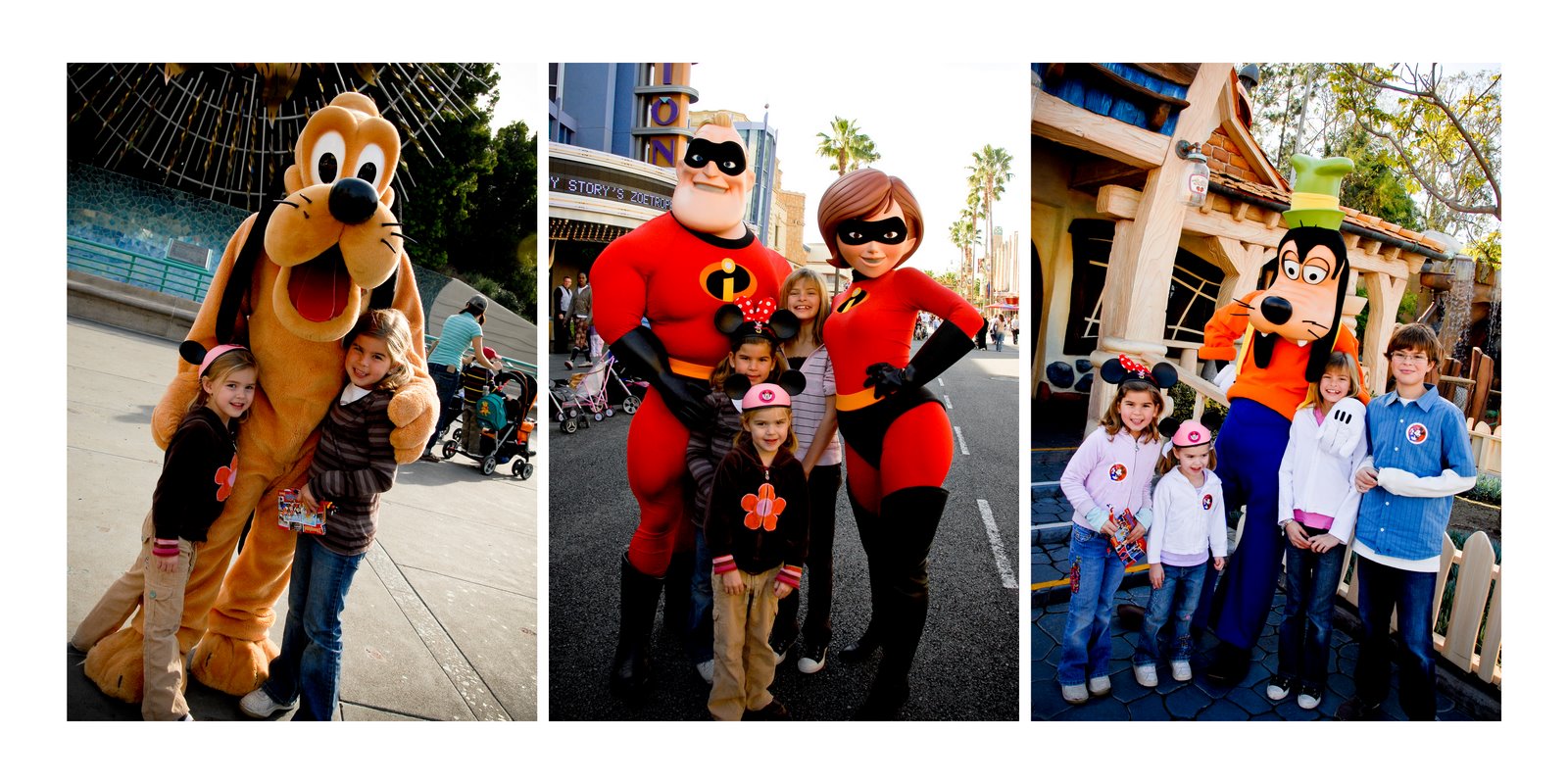 9) Despite being pretty overprotective of “family time,” Disneyland is a great place to meet up with friends. On our second day we met up with one of Dave’s best college friends and his cousin (who also happens to be one of his best college friends) and their wives who I love. Between us we had eleven kids to keep track of. 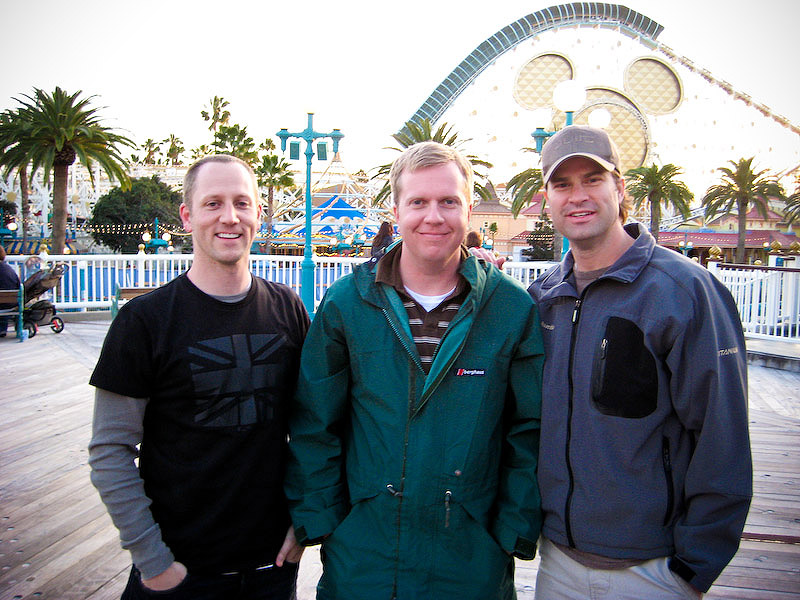 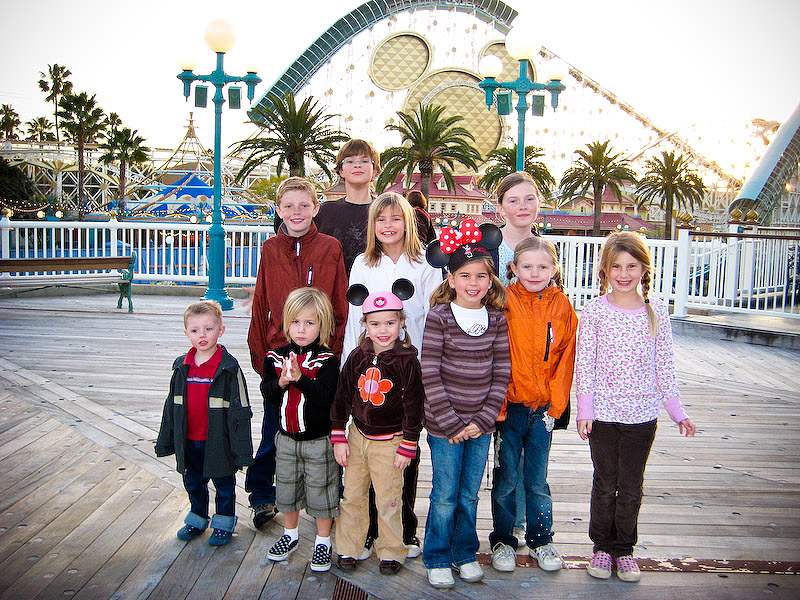 …our kids were delighted about that.

10) Dave is pretty good at shooting at targets in Buzz Lightyear. But his friends are much better. 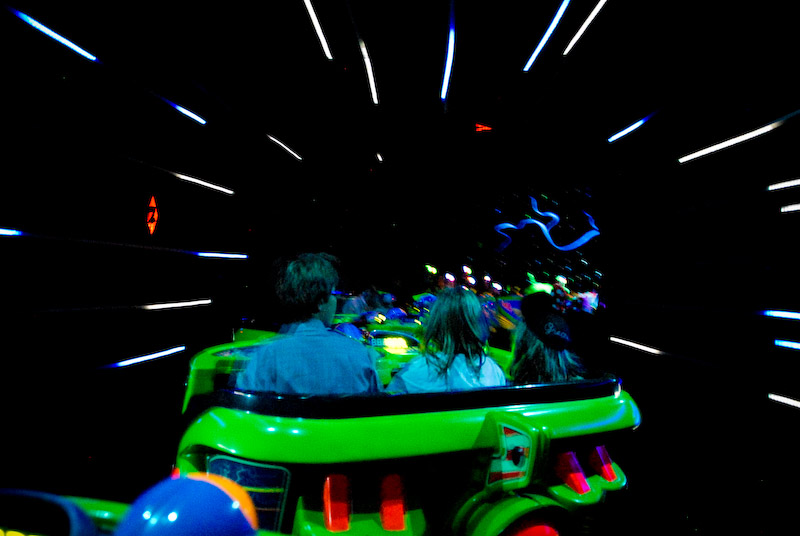 11) Dave is really good at driving bumper cars. And at making Gracie laugh. 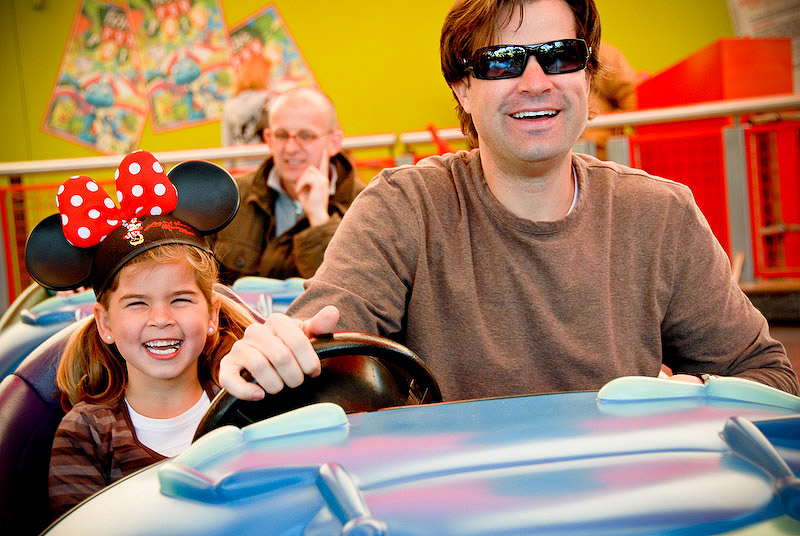 12) Max is the best big brother ever. 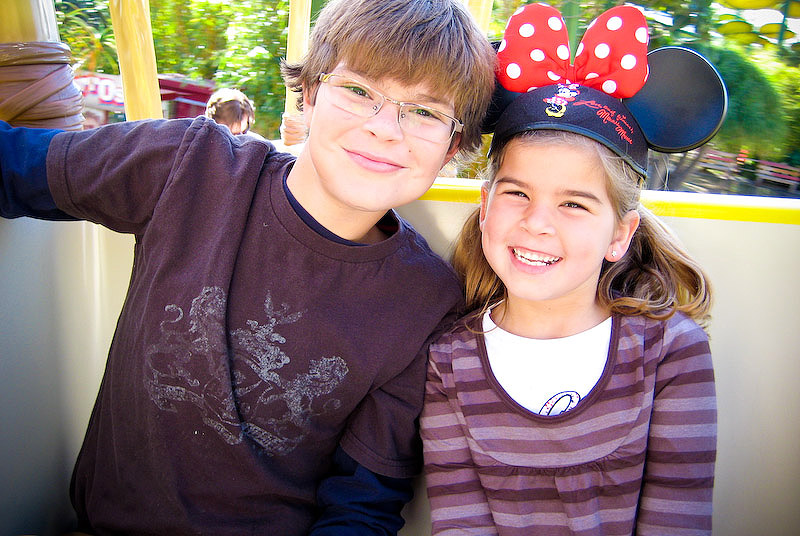 Man oh man we sure had a good trip. 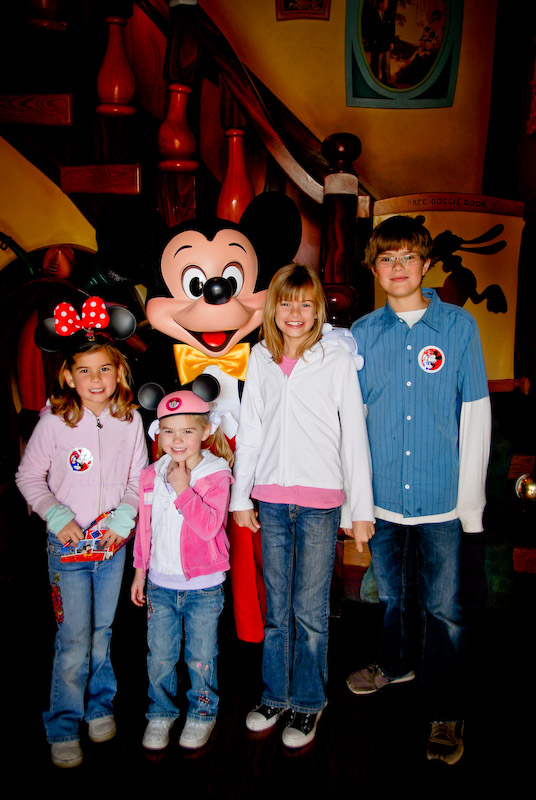 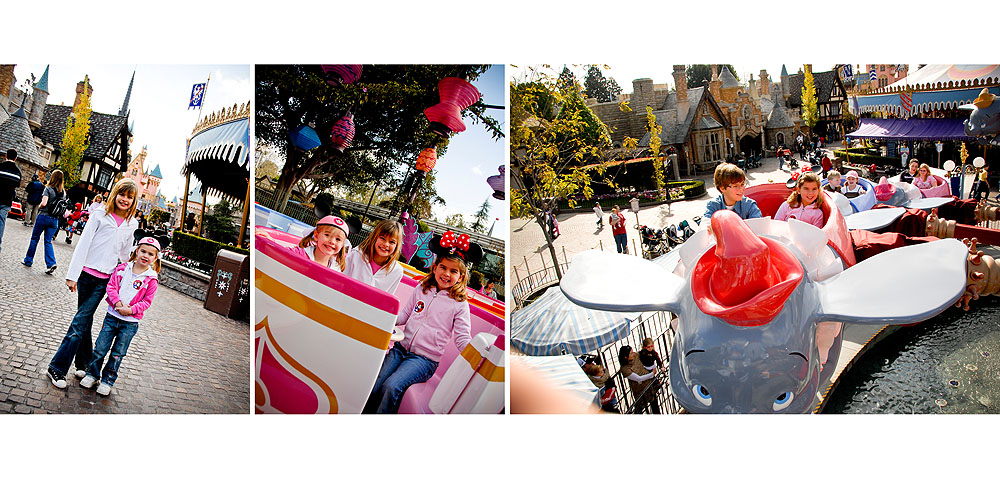 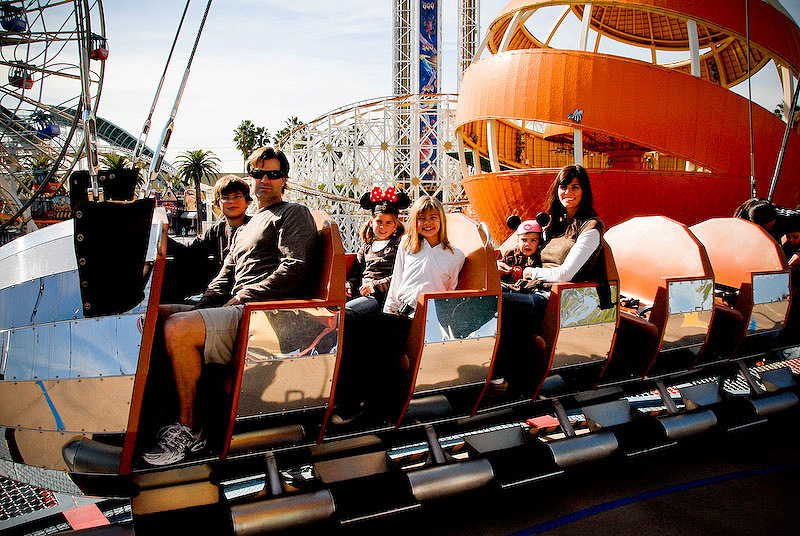 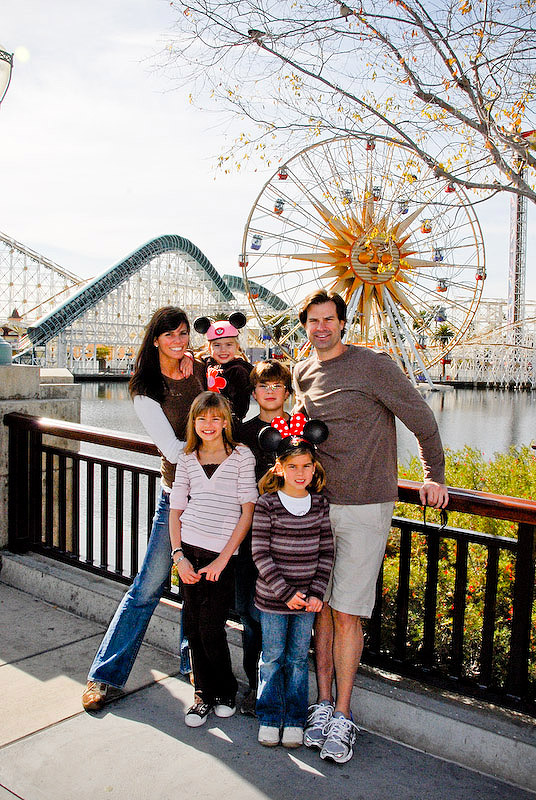 That’s one we sure won’t forget, but we were glad to get back to our own beds and to snuggle up our sweet Lucy.

the ranch for Fall Break {back in October}

AWWWW! So glad you had a super time at Disneyland! I LOVE all of these pictures!

these pictures are so awesome! i almost feel like i’m there. i’m glad you had such a great time. there is nothing like some good disney memories.

Your list is great! Good, true lessons. Glad you had a great time and glad your back!

So fun! I loved reading about your trip and the pics are great. Good lessons to learn about the varying levels of joy regarding the “Surprise!” My dad still talks about taking us all to Disneyland when I was 5 or so and me begging him to “Carry me!” the whole time 🙂 He apparently didn’t know the stroller lesson…

Disneyland really is the happiest place on earth for kids especially when you dont have any lines. Looks like you had a great time.

These are great pics- now I want to take my kids to Orlando for their big February “ski” vacation. Thanks for stopping by my blog and recommending your sister as a photographer. I might just call her- If we come out west- I am flying you to meet us to take the big family photo-

Don’t be surprised if I am a regular/ at the blog- I have a million things to do with my own kids, house and life, but for some reason it is great to see what other people are doing- I am now a big avid reader- you have great ideas!

Looks like you had fun! And great weather, too.

I loved your coats. I did that to my kids a few years ago. It was warm all day, but by night, when it cooled down, I had nothing. So we wrapped them in towels (from the car). Nice…

Looks like you had a great time. Fun, fun trip!!! Smart move on not bringing Lucy, she wouldn’t have enjoyed it or remembered it anyway. Looks like you had great weather too!!! Sorry I missed your call I will try you tomorrow.

Sooooo fun! It’s great to know that each kid is different in many different ways. It’s cute how your daughter was worried about homework, ha ha. That would have been me too…a worry wart. But it looks like you all had such a blast.