One of our summer projects was to paint Grace’s room. She wanted a little change from the yellow walls Lucy had for so long.

And I discovered that when you mention the possibility of painting a room to 6, 8 and 11-year-0ld girls their eyes pop open in incredibly eager anticipation envisioning themselves painting real walls. And, well, I’ll just say it’s very difficult to turn those gleeful, hopeful expressions down.

I mean, painting a room seems dreamy to a kid…I remember.

I figured they were excited enough about it that they would at least stick out the beginning part, and that made it worth it to start the project.

So we tried a couple different colors we thought would go with Grace’s new duvet cover. Grace wanted blue, so we chose a couple shades of the most pale blue we could possibly come up with to pick between.

But they didn’t quite turn out pale blue. The swatches we painted turned out looking more like the blue cotton candy you get at amusement parks. I knew enough from previous painting projects that that blue swatch was going to be a little on the bright side. 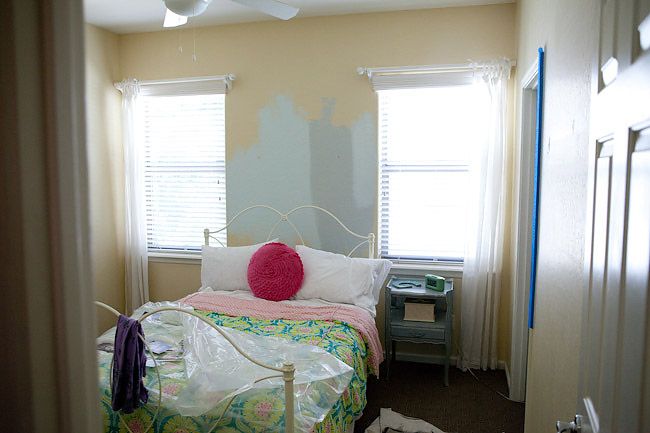 But you know what? Those puppy-dog eyes looking up at me pleading to please let them start painting, and the fact that I just wasn’t in the mood to walk the aisles of Home Depot again did me in. We mixed the two paints we had hoping to tone it down a little, and got to work. 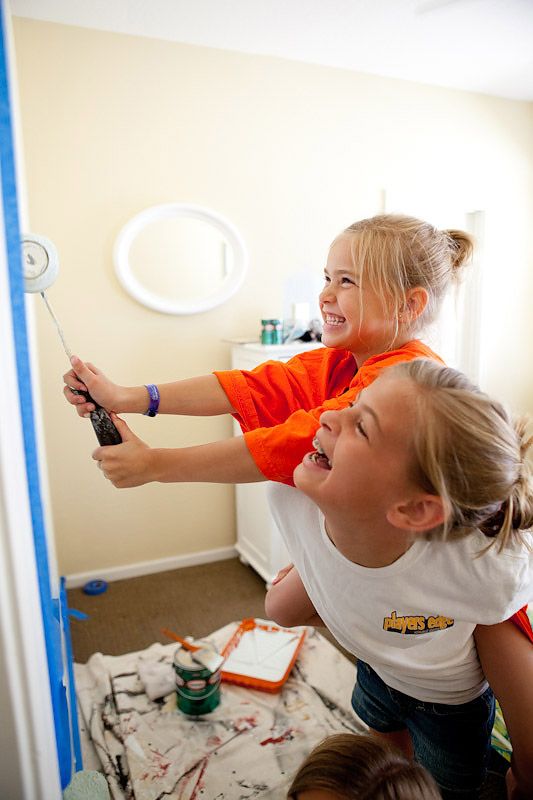 Can you tell how excited they were? 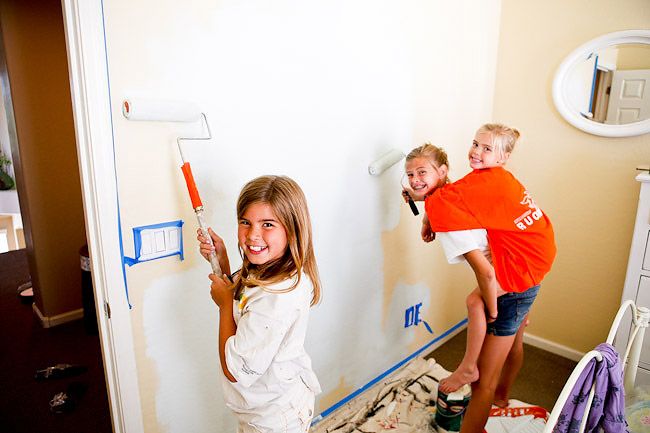 I really thought they’d get tired and leave me to paint that darn room for the third time since we’ve lived in this house all by myself, but they stuck it out… 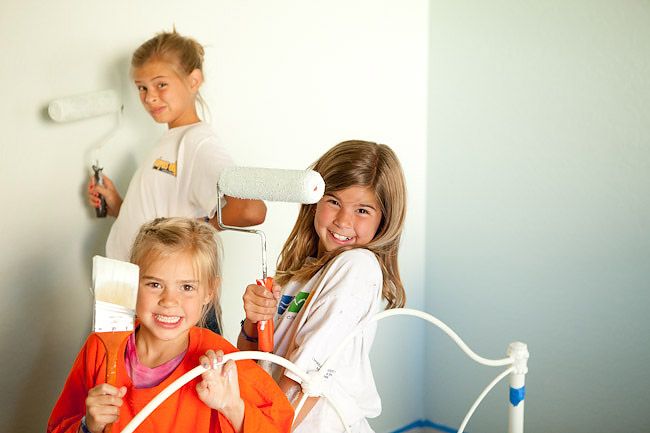 …from afternoon until way after dark. 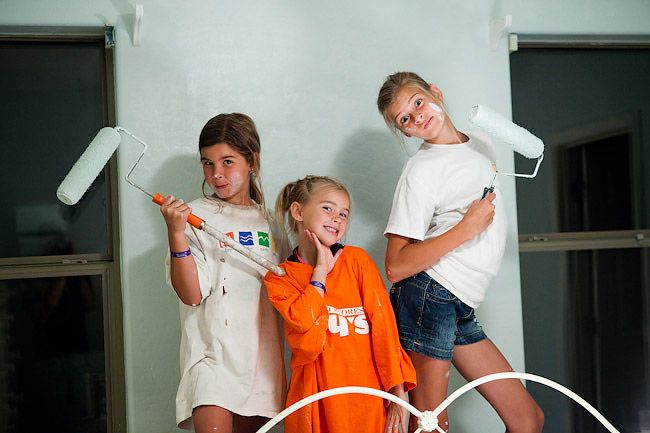 And they were excited the whole time.

Their little bodies were covered in paint by the end, but surprisingly the carpet came out spotless (thanks to some good plastic and drop cloths) and we only had one pair of jeans as a casualty from the job (and thanks to a little rubbing alcohol they actually came out ok in the end). 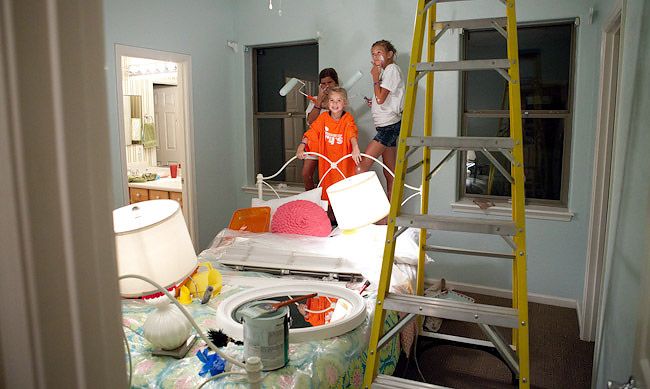 Did I mention how much fun we had? Seriously. I do realize that in doing this project there were about a hundred scenarios that in a split second could have ruined it all, but somehow the stars were aligned in just the right way, because it was one of those “moments” I think we’ll always remember.

Claire ran around and kept asking what she could do to help for hours. She was our “drink-getter” and trash remover. Grace and Elle pretty much rolled every single wall while I edged it all. 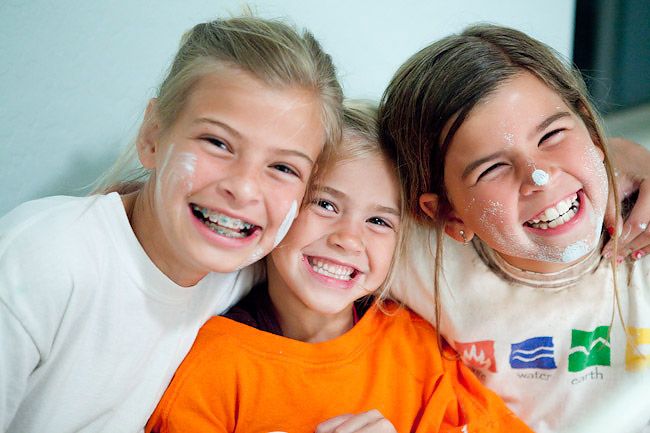 (Grace’s hair is wet in that pic. above because she accidentally rubbed her head against a wall while trying to load up the roller with paint. Luckily it washed out without too much trouble.)

So here’s the finished product all put back together: 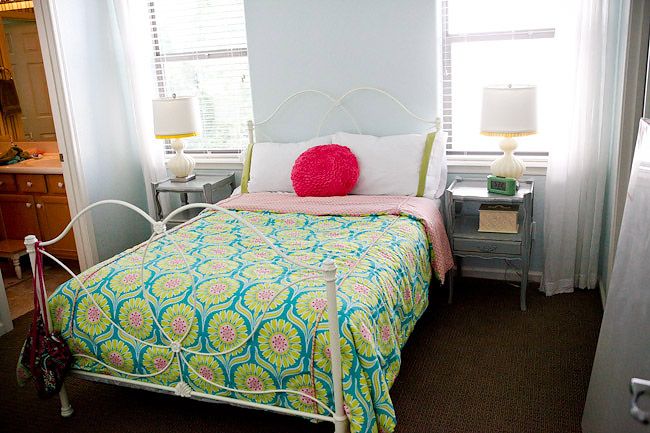 These pictures don’t quite show how bright it is, but the excitement of it all made me get past the worry that it was going to be fluorescent, even when I saw it the first time from the stairs and gasped because it looked electric blue from there. But either I’m getting used to it or the furniture has made it look a little toned down because it’s grown on me and Grace adores it, so I guess that’s what counts.

Let’s get one more closer look at that duvet-cover: 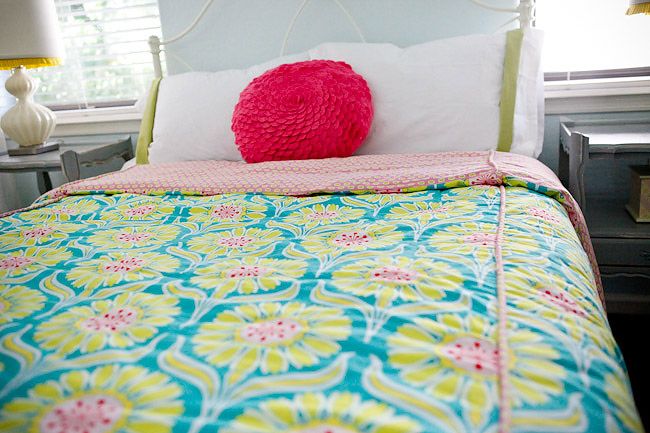 There we go. (We’re sewing those green embellishment things on the pillows tomorrow, and then we have to figure out what in the world to put on the walls.) 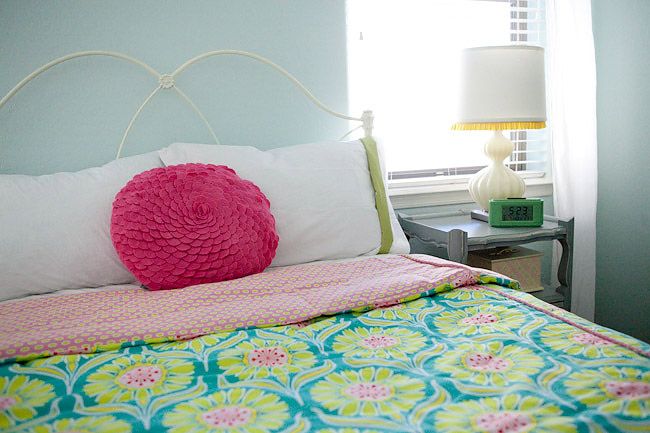 I love this extra touch of color Denise suggested might be fun on the lamps too: 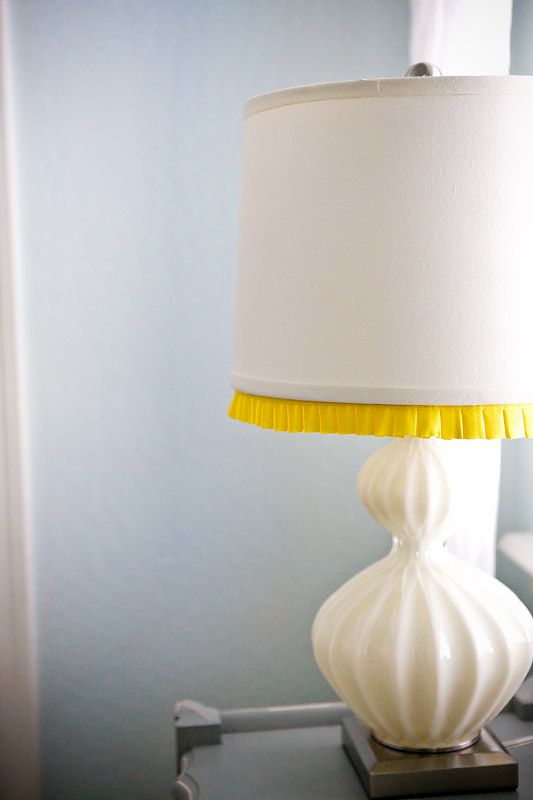 On the topic of home stuff, a very sweet and talented blogger just let me know that she featured my little home-spruce-up project on her DIY blog last weekend here. (Thank you so much, Roeshel!!)

Now if I can just get stuff organized around here. I’ve been employing Grace and Elle as my secretaries. I could get used to having two secretaries around…if only I could put them in charge of sorting through my D.C. pictures….hmmmm…maybe that’s a good idea…

Power of Moms: A Motherhood Retreat

how to decorate with pictures

So sweet! You are such a fun (and brave) mom. BTW, would LOVE to contact your friends Denise. What is the best way? I posted a message on her blog awhile back with no response….help!

oh wow I love your helpers and love the new room and still loving the heather bailey duvet cover! wow so gorgeous and bright without being too girly.

I still remember our house before this one had a bright yellow hallway so we painted it 2 weeks before I was due to give birth. I was just the helper and swished my big fat pregnant butt along the wall when I bent over didn't realise till hubby was inspecting the wall later that night and then saw it all over me! too funny! painting is fun and at least you captured it on photo!

The blue looks perfectly grayish and muted to me — great job anyway!

We are in the process of finishing our basement and my girls ask every day when they can paint the basement. I haven't been thrilled about the idea of letting them help, but if we can have half as much fun as you did I am excited to let them!

Oh wow, it looks gorgeous to me! The girls and you did a great job!

You are so brave. I would never be able to do that, mostly because my husband does all the painting so I'm not very experienced myself. Way to go–she looks thrilled in the pictures!

The room is lovely! My kids used to BEG to help me paint…I never let them because I was afraid they would mess it up. How many times have I wanted to kick myself in the rear end? Oh, about 49,704,905!! Such memories that could have been made…you are awesome to include your little ones in these projects! Can't wait to see the next one!

We painted my 11 year olds room bright green – EEEK! I am still trying to come up with stuff for the walls to tone it down. And…this room is darling♥

Is that a jack and jill bathroom I spy? Oh, that is so dreamy – so is the cool color blue too! Lindsay and Caroline (and me included) are in the middle of a bedroom spruce up too. I think I may let them paint because they want to so badly and since they are the same age as Grace and Claire, I guess they can handle it too! Except that they want hot pink…I will have to work thru and manipulate that choice!

is it just me or is there some reason I cannnot see the pics I can see the post belows pics but not this one. I am sure it is gorgeous I just wish I could see it.

Who has an extra toe?

Just wanted to say I see all the pictures now….AMAZING love the blue and the duvet cover is to die for!!! I am jealous of your sewing skills!! This post makes me want to paint something with my kiddos! Thanks for sharing!

GREAT STUFF! Can't wait to see it in person. And the kids are as cute as the room!

cute! Now my daughter likes Grace's room better than the re-do I did for her a few weeks ago (I think it may be b/c she has to share her room!)

You're a nicer mom than me. We just painted a bunch in our house and we were too paranoid to let the little ones help. Next time, maybe we'll put more protection up and let them though. It looks like it was a lot of fun memories!

cute room… cute post! Where did you get the lamps? I've been looking for some just like them. I love the yellow pleated ribbon you added too.

Where did you get her duvet cover?? I LOVE it!!

Darling! yes where did you get the lamps? I have been looking for one just like that.

Love this and your Blog!