Home Dave speaking of being in training…
Dave

speaking of being in training… 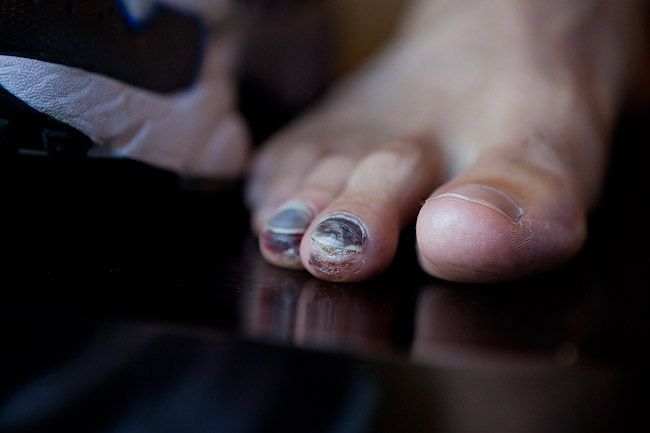 If that’s what it takes to run a marathon I’m out.

(Well, really I’m out since I can’t run to my neighbor’s house a couple blocks away without keeling over gasping for breath, but the black toes aren’t calling my name to change that wimpy factor.)

Did you know that when you train for a marathon in the desert you have to get up as early as 3:00a.m. to beat the heat? I’m very serious about that. It’s sometimes still 95 degrees even that early, which is HOT to run 20 miles in (I can claim that even if I’ve never done it). But according to “the runners” the heat is endurable until the sun comes up and starts to bake you alive.

Dave is usually more of a 4:30a.m. runner (seriously he is so lazy ;)), and when he’s out there he’s shooting the wink and the gun-finger to practically our whole neighborhood. Yes, a whole slew of them seem to be that nuts about running. And I think they’re awesome for it.

Dave has overcome his cracked rib and a broken eardrum (from a water skiing accident this summer), and is still working on figuring out some mysterious, serious pain in his foot.

Now that’s dedication. (Or is it just plain crazy??)

Anyway, I’m proud of him…black toes and all.

some culture in Los Angeles for our {late}...

Oh my gosh Shawni, this cracks me up. I don't know how he does it…we had a super hot humid day here and Jeff went for a looooong run and when he came home he was FOAMING at the knees. Like a horse? Seriously. I haven't stopped making fun of him. Have Dave come here and run a nice cool fall marathon and he will win it, just from all that heat intense training!

I could never run a marathon, it doesn't even sound fun. I prefer to get my exercise other ways. I do admire those who can do it, and part of me wishes I had the desire. But I just don't!!

Wow, he's a trooper! I thought running would be fun until I tried it and got Bone Spurs in my feet and Plantar Fasciitis. No more running for me. It amazes me that people are so dedicated to it. How do they do it?

My hubby has ran a marathon. I only run half marathons…

my 1/2 marathon training gave me a "mysterious" foot pain that turned out to be Plantar Fascitis.

Same thing happened to Husband…it fell off after he ran the 10-miler. Now it's just a toe…it's gross though, right? I used to freak out if he'd try to touch me with it!!!

What are his foot pains…I am sure I have had them too. Maybe I can help. Love his toes.

That takes some serious dedication! He really should go see a podiatrist about his foot though, I'm thinking the black toes aren't really something that should be ignored for too long… and if Dave does have plantar fasciitis a podiatrist can recommend some good stretches and maybe even orthotics for it.

Last thing he trained for he had plantar fascitis…this one's different. Just pain in the middle of his foot. He thought it was a stress fracture but now not so sure. I just feel worried about him running around on that thing.

Oh and I forgot to say he's been to a couple different doctors and a physical therapist, had x-rays, got new orthotic thingies, etc., but they no one can figure out what's wrong. After running 20 miles last Saturday he told me he thought it may be getting better as he sat on the couch with big bags of ice on his knees AND his foot. Hmmmmm.

Shawni, I absolutely love your blog! I found a link from my SIL's site http://jefferiesbebsite.blogspot.com/.

I just wanted to mention, maybe Dave needs bigger shoes. I had toes like that on my first two marathons, but then I went up a size in running shoes, and my toes never get that bad anymore. Worth a shot!

Whoa. If he's not careful, you guys will be down to 69 toes! My sister is training for the Baltimore Marathon. Hello craziness.

I'm training for a september marathon and thank GOODNESS my toes don't look like that. 😉 I like to wear flip flops. I totally understand the icing thing… I sat around with ice on various parts of my legs most the day after my 18 miles last saturday.

ewwwwwwwwwwww! I'm married to a runner but he doesn't get up at 4.30, geez he couldn't be up at 8.30 for a run but he goes for big long afternoon runs and loves it. He comes back so happy (and smelly).

I used to run before kids but am so unfit but have to say that having 3 small children keeps the weight off so I can't complain too much:)

Well, now ya ruined it for me Ms. Shawni! I was gonna train for a 1/2 this fall but dare I risk toes like that? I've never gotten those from a 1/2 but I've never run a full marathon before. It's on the bucket list.
Just wanted to de-lurk to say I love your blog–and you have just the most adorable little family.
love to you and yours,
edie