So, when we went into the big city for our Labor Day get-away, I never told about our adventures on the light rail.

And since it further illustrates my desire to make sure our kids see life from a different perspective (see this post), here you go:

I was pleased as punch to get our kids out on a little adventure and figured riding our city’s relatively new light rail system would be fun for the kids. We wanted to go to the art museum, so what a better way to get there than on that thing? 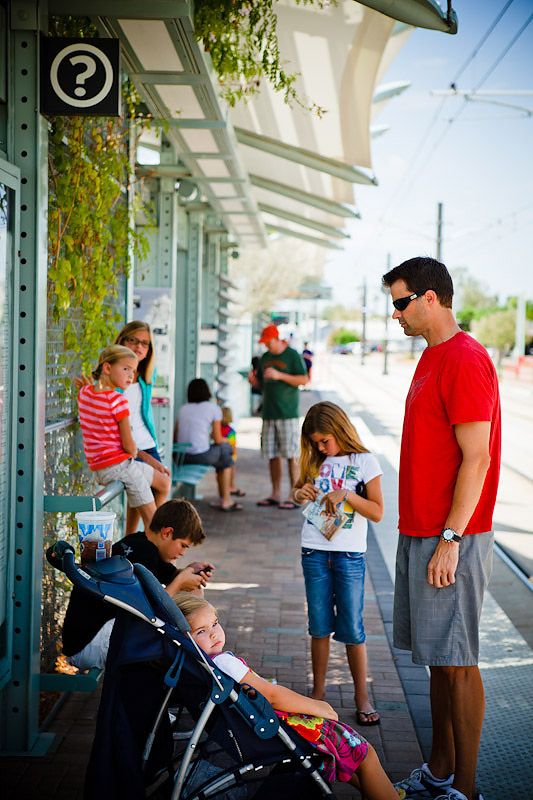 Dave kindly obliged, and we all melted in the heat while waiting for a train to come pick us up.

It was a baseball game day, so the particular train that pulled into the station was packed. Dave and I got split up with a few kids each and ended up at different doors, he rolling his eyes at me over the crowd at the fact that we didn’t just take the car.

But I was in Heaven. This was an adventure. There was the humongous homeless guy spilling out of his wheelchair (and his tank top). And the totally drunk girl taking up three seats with all her stuff while everyone stood hoovering around her wishing she’d move over. There was the guy covered in tattoos with a big, huge knife attached to his belt. And the smell…man oh man, the smell rivaled some of the smells in New York subway stations.

Yes. This was what I had been craving for my kids. For an opportunity to realize not everything is surrounded in safe white picket fences like it is in our little corner of the world. Not everyone has a home and an opportunity to go to school with a tight-knit group of kids who are great examples and role models. This, even if it was just a little sliver of time and experience, was more like real life. And as much as I want my kids to be protected and coddled to a certain extent, I want them to know that the world is so diverse. And that diversity makes it interesting…and good.

I envisioned the talks that would ensue after our ride, rainbows and butterflies around our family as we fed the hungry at a homeless shelter, the compassion that would suddenly fill them and all the new ideas they would have to change the world.

As we spilled out of the train at our stop, leaving that sea of “diversity,” Dave commented to me sarcastically, “Now that was sure worth it.” And the kids? Well, they didn’t say much. They were on to the next thing…how to endure that art museum with their Mom whispering in their ears the whole time about how awesome all that crazy stuff on the walls was.

I thought it was so interesting how differently we all took that short little ride. I guess the people next to Dave had the most foul language he’d heard in a while and his question was why in the world would we want to expose our kids to that stuff?

Yes, I see his point. But as much as I do appreciate and thank Heavenly Father every day for the life we live here in the desert, sometimes I’m glad to have a little snippet of the “real world” to remind me (and my family) that there is a whole world out there full of people who think differently, live differently, believe differently. And all that diversity is so good (except for the darn foul language which I personally can’t stand).

Some may need help and we grow and become our better selves as we reach outside of ourselves to them, others we can learn endlessly from, and our world is better because we have them in it.

I love to think of how different the same world looks to each of us, even within the same little corner we live in.

this month so far…

growth by doing it wrong rather than right

so true, this is so good. It's a hard balance, for sure. Exposing yet protecting your little ones.
You have such a beautiful family.

I was cracking up at Dave rolling his eyes at you over the crowd! I totally see what you're talking about! Hallelujah for sweet husbands that allow us to fulfill our (sometimes silly) visions we have:)

I can relate to this in so many ways 🙂

I love how INTENTIONAL you parent. They will thank you one day for the exposure to all things….good and bad!

This is one of my "soap boxes" too — I crave diversity. even if it does include foul language and knife carrying men on a light rail. What great lessons it brings to our families. Love it!

Last summer we lived across the street from a park peopled by some very drunk homeless types. I admit I was a little concerned about sending the kids over to play on the playground and what they might see. It turned out to be just what they needed.
Seeing people drunk, unemployed and homeless 24/7 has made my kids decide that they want something different.
One morning on the way to church, one of the "kaputniks" as we called them, fell into a planter he was so soused. As his two friends helped him up, my six-year-old rolled his eyes and said "I am NEVER drinking alcohol!"
It was more quickly and clearly taught than my husband and I ever could have in an FHE lesson.
On the flip side, I love that diversity teaches them to appreciate different people. Our four-year-old once said "That [japanese] lady smiled at me. I didn't know if she spoke english or german, so I just smiled back."
Great lessons to be learned IN the world!

Shawni I have your view point on this for sure! (And my husband would be Dave for sure.) I think my kids have always reacted just the way I wanted them too…with wide eyes and a WOW and then a little realization that all the work we are doing to teach them how to speak correctly, why you should brush your teeth and wear clean clothes, and how lucky they are that they don't have to be constantly worried about crime, and that everyone is NOT out to make their lives easier…that's a lesson worth anything.

Shawni, it is so important to teach our kids that there is a wide world out there that does not always look to great, or sound to great. My 10 year old loves ask "is this a rough neighborhood?"

I totally agree! Growing up in the suburbs of Dallas and Phoenix I thought that I had had a little exposure to diversity. Then my husband was accepted to business school in Philadelphia and I was shocked at how different life was in downtown Philly. After two years I grew to love the diversity and our crazy South Philly branch at church. And when I say crazy I mean crazy.

After b-school we moved back to Dallas and decided to raise our family here in the city. It has it's challenges and the ward can drive me crazy at times, but I'm hopeful this life experience will allow our children to see life a bit differently.

Let me know when you and Nicole want to get together. Would love to talk. Got word of a lighting class coming up, I'll let you know.

Dear Shawni, thanks a lot for the e-mail you've sent me some time ago regarding your camera.

You said you want to visit again Romania. Maybe it would be good to bring the children with you. Romania is full of life lessons…
For Dave I think it would be too much 😉

I am so glad you mentioned all the different attitudes toward that train ride. I have dragged my kids kicking and screaming to museums, only to be confronted by tons of nudes. My kids angrily asked me why I wanted them to look at fat naked ladies? I really worked to find a good answer to that, and I don't think I was succesful. The expose/protect issue for a Mom is a very delicate balance.