this month so far…

Some random things I haven’t gabbed on and on about yet:

We introduced our kids to Dave’s favorite frozen yogurt place. I say “Dave’s” favorite because I could take it or leave it…I’m not a connoisseur of ice cream. I’ll just take some chocolate chip cookie dough, thank you very much. 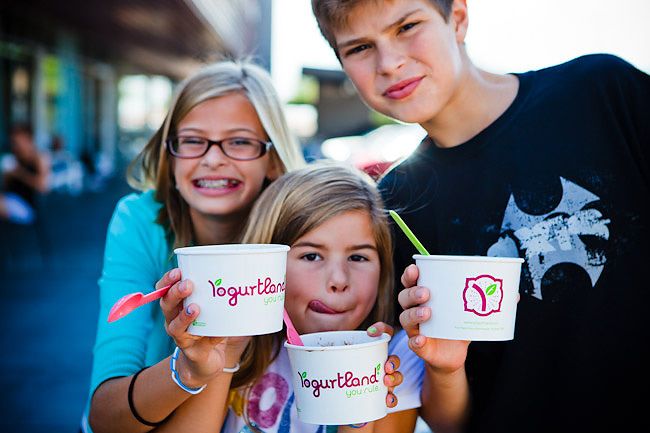 They quickly joined on Dave’s bandwagon and have been asking for it ever since.

It was “twin day” at school and man alive, kids get pretty excited about that around here. Grace and her friend worked up some great, “original” outfits: 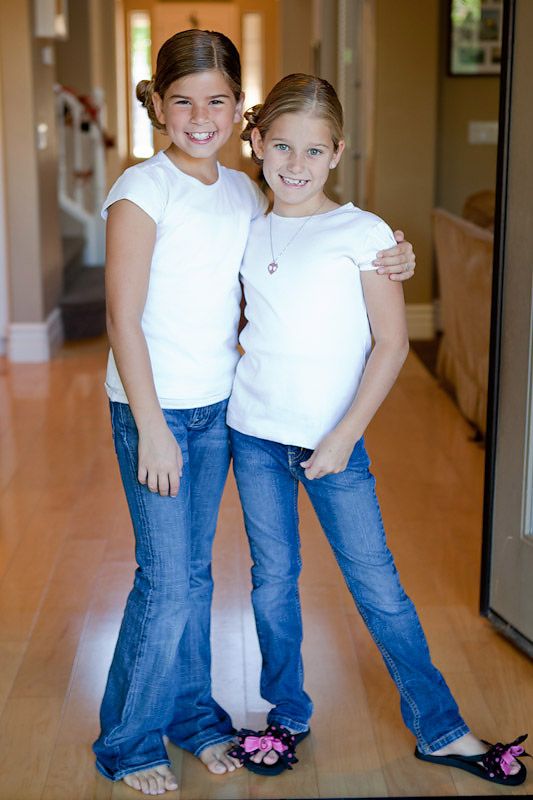 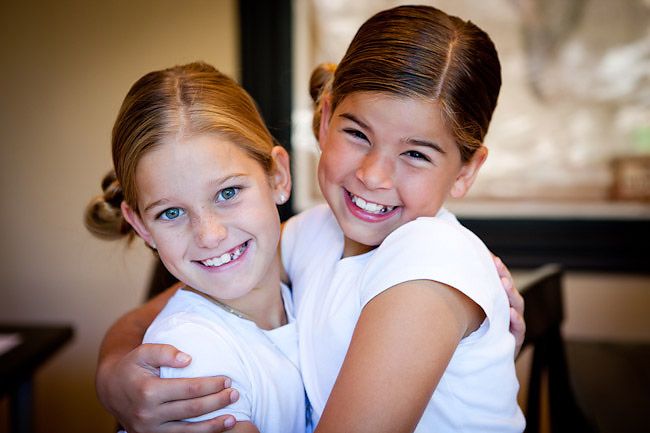 …yes, so original that Claire and her friend just happened to come up with the exact same great idea: 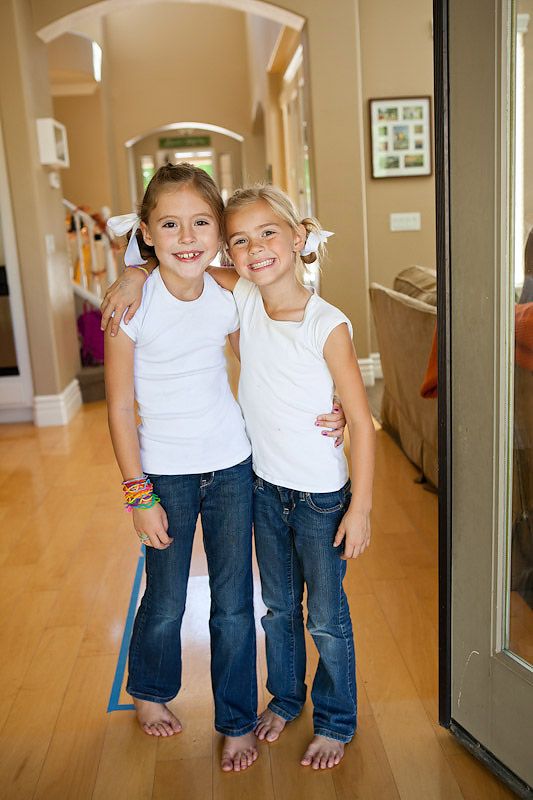 Max was the first one in our family to get bitten by a scorpion right on the elbow: 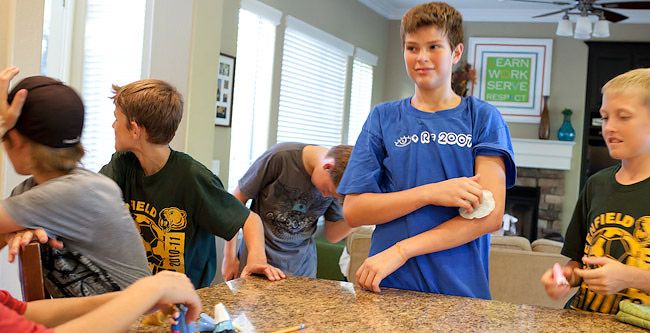 (I had to post this blurry picture because it illustrates exactly what happens when I pull out the camera when teenage boys are around…see them whipping their heads around?) 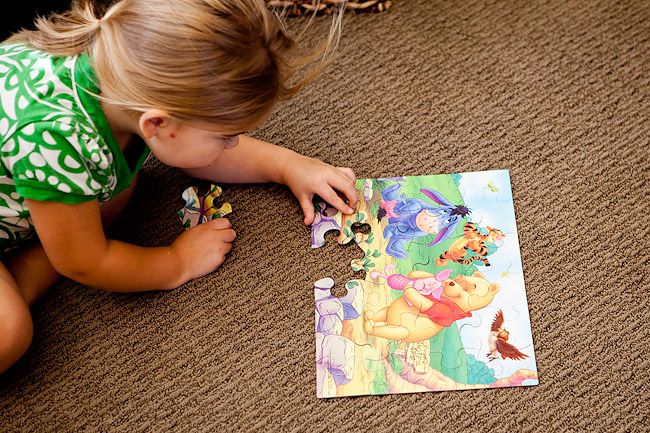 Lucy is attached at the hip to her puzzles. She has done each of her 24-piece puzzles approximately 759 times. They have kept her busy on airplane after airplane, doctors offices, restaurants…the works. They are worth their weight in gold, I tell you. 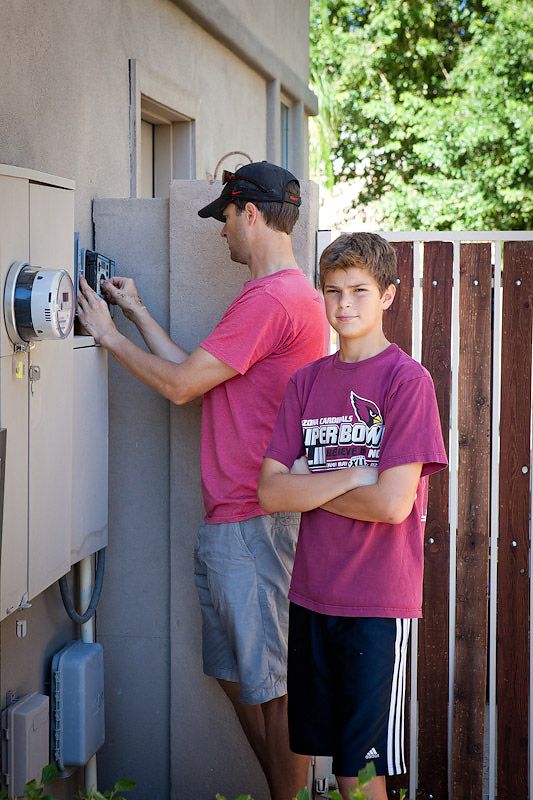 Max, (with a little help from his Dad), reseeded our lawns. Remember how in the desert we have to re-seed our lawn every single Fall? As if it wasn’t bad enough that we don’t get the gorgeous Fall foliage here, having to cut down all the green and spread stinky manure all over our lawns to help the new grass grow is really the kicker.

I’ll tell you what, that is tough work, but he did it. 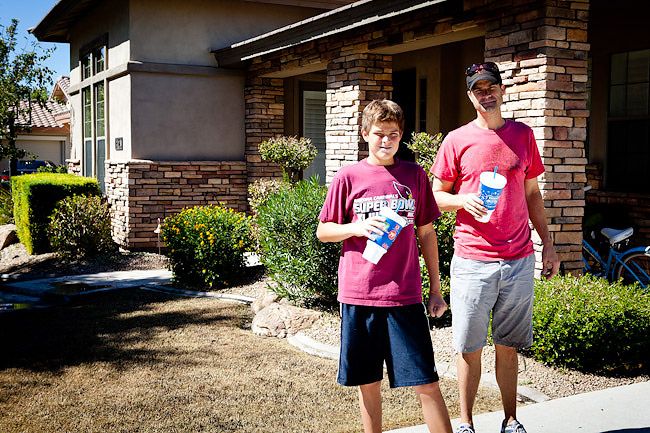 …until Dave and I asked when he wanted his paycheck (this was a “money job” and he definitely earned it). The thought of that poor boy actually having some money in his pocket sure brought his smile out: 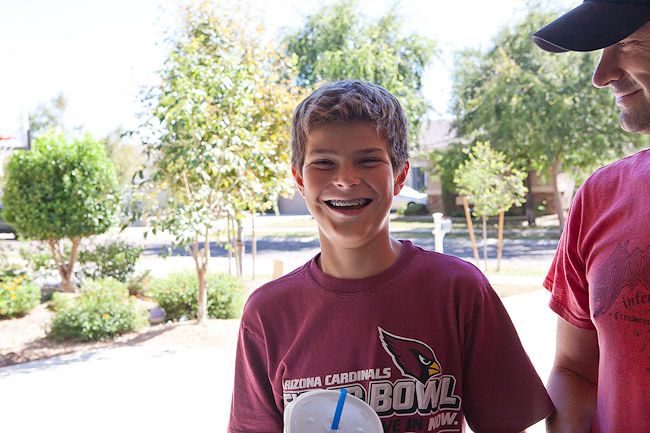 Claire is always up for a little photo shoot. 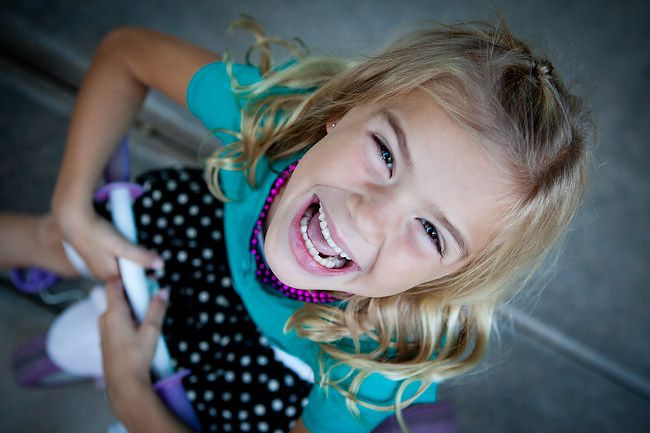 This next little tidbit sure created a flurry of excitement around here: It hailed. Yep, right here in the desert. There was ice covering our driveway and mounds of hail here and there. Now that sure doesn’t happen around here very much. My kids were so giddy they could hardly go to sleep that night. 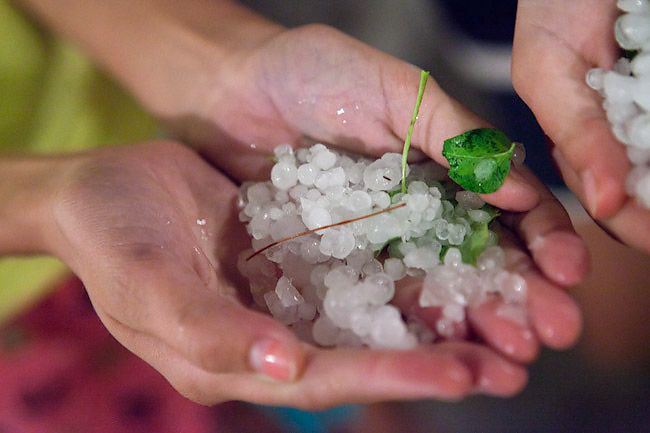 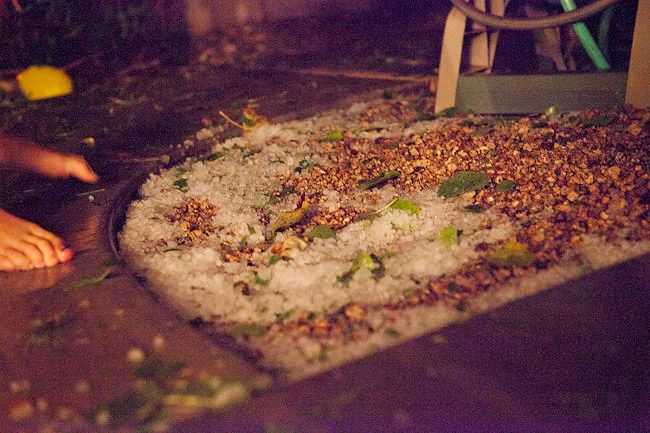 –Claire’s earring has been so infected it has grown around her earring twice in the last few weeks. You can imagine the drama that has ensued after that. I think it’s time to let those babies grow in and try the ear piercing again when she’s older.

–Dave ran a marathon…oh yeah, I mentioned that, right?

–Dave has been in town for maybe four nights so far this whole month.

–Max had his first volleyball tournament and came home over-the-moon. My heart still aches that I couldn’t be there (Dave was out of town and it was two hours away and the girls all had other commitments that same day and I was leaving out of town early the next morning and the Lucy factor in the car for four hours to and from a tournament and then being kept happy for hours on end watching volleyball…it just wasn’t in the cards.) But that doesn’t stop me from feeling sad about it.

–I have about 700 pictures from Fall Break still sitting in my camera that some day I’m sure I’ll download and take a peek at.

More later…I have to go do loads and loads of laundry and get to parent/teacher conferences and get ready for our Primary training meeting tonight.

I’ll just finish off this post by saying that I swear this month is flying by faster than any other month in history. I wish I could stop time but it keeps racing on, faster and faster…and faster. Sometimes that makes me want to cry.

it takes a village

what our “young adults” have been up to...

so grateful for bodies that work

baseball with some girls

I agree that this month has gone sooo fast. Even my daughter said that this morning.
Try not to feel too sad about missing Max's volleyball game. They'll be lots of others (But I know I would feel bad too).
Great idea using tape to help get those cart wheels straight!
And I agree that getting pictues of teenage boys is almost imposssible!
Have a wonderful day:)

I don't know how you do it with your husband being gone all the time??? Any tips on how you stay sane?

Fun updates! I have almost found myself losing my breath with fear of these days with my four kids (7, 4, 2, 8 months) being over and I'm in a quiet house, sleeping through the night. Not to say that won't be nice, but it's going toooooo fast!

Poor Max with the scorpion! I grew up in Mesa (Lehi area) and scorpions infested a field close to our house…needless to say, we were plagued with them! I always felt like I had to watch where I sat or walked…those little buggers!

Looks like everyone is surviving and thriving! Thanks for the candid update.

Dear Shawni, you must be an "iron woman"! I don't find any other explanation to your energy and commitment 🙂 Congrats!! You have a beautiful family!

this month is truly flying by! and I don't like it either!!! I have about 550 photos on my camera fromt the last 5 days! I am MAKING myself wait til the card is full! the only problem is I dont know HOW many pix fit on it! and I am dying to load them!
can't wait to see your 700 +!
tara

oh you have the most beautiful photigenic children!!!

What a fun update.
Twin day… I love it! I love the original outfits 😉

I know….usually October is my favorite month because I love decorating for Halloween and I love the cooler weather. Also, I'll admit that I like watching the Disney channel Halloween movies with my kids but this year it's different. I can't seem to keep up with anything and I don't have time for anything and the month is already almost over! I wish time could work with all us moms here for a little bit…even a couple of days so we can just catch up on life.
🙂

You're amazing and such an inspiration to the rest of us! You have a very full plate, but you manage things so well. I think you should write a book on how to manage life! Yes, October is flying by, but that only means that so will November and December…Have a great day!
~Mary

Okay a few comments here. You have got to see my post on Yogurtland. I just laughed out loud when I saw that. A scorpion? No way! What do you do for scorpion (bites, stings???)
I posted on my blog about my youngest getting her ears pierced over the summer break and then she almost passed out when she had to turn and clean them. Seriously, I had to make her sit down and put her head down between her knees. She turned white. I told her we could turn and clean them or take them out and wait until she was older to get them pierced again. She opted to take them out. Darn it! There went $50.00. I had an idea that would happen.

I agree time is going way to fast, I wish I could slow it down. We live on the prairie so you would think it would be easy to get grass but we have to reseed in the fall and spring to keep the good grass growing in.

Yes, life does keep going faster & faster! I'm with you, somtimes I just want to yell "freeze!" and have long blissful moments to stare into my kids' faces and cuddle them. Especially that 5-month-old that is changing by the very day.
p.s. I'm with you on the choc chip cookie dough thing. My husband canNOT understand, but man do I love cookie dough.

I love reading about your family. It seems so fun and such a happy home.

Thank you for sharing your life!

I loved hearing you and your mother speak today. You guys are an amazing family.

I would love to reconnect!
Thanks
Michelle

I heard you at Time Out For Women this weekend! My neice told me about your blog a couple of months ago and I have been enjoying all your parenting tips and fun traditions! I already had tickets to TOFW and when I found out you were speaking and I was so excited! It was fun seeing you in person and hearing your actual voice! You were so sweet and warm and I totally think you look like Grace! Thanks for having such a wonderful, real and uplifting blog!

oh man i had so many comments to make reading this but i can't remember them all.
1. try the purple taro flavor and add coconut at yogurt land. that's my favorite
2. a SCORPION. so so sorry max
3. 4 days the whole month!!!! oh man I'm a baby!
4. i am very excited max is playing and loving volleyball! we've got to play at bear lake next year
5. i need to buy some puzzles
6. cute twins. very cute twins.