we do hard things

Last week Dave and I forced Elle to try out for the Jr. High volleyball team.

By “forced” I mean suggested it would be really good for her, and since she’s such a pleaser she went ahead and obeyed our wishes. (That and the fact that she would have felt really bad not trying out after I scrambled all over town trying to get her health-release form from a new doctor and all the other papers in by the deadline.) Despite the fact that she was really uncomfortably nervous about it (she’s never played volleyball before the two-week “camp” she did right before school started and only knew a couple girls trying out), she knows that in our family “we do hard things.”

The theory behind Dave and my crazy tryout idea? Well, she’s going to be tall. And she’s pretty coordinated. It’s a team sport we really thought she would like (as opposed to the single-ness of tennis), and it would just give her a good introduction to it if she wanted to do it in the future. Hey, it was like free lessons.

We had several talks with her about how we just wanted her to do her best and regard the tryouts as some good exposure to a new sport. We didn’t want her to be heartbroken or feel bad when she didn’t make it.

Dave and I took turns watching the sunrise as we dropped her off at early-morning tryouts each morning. 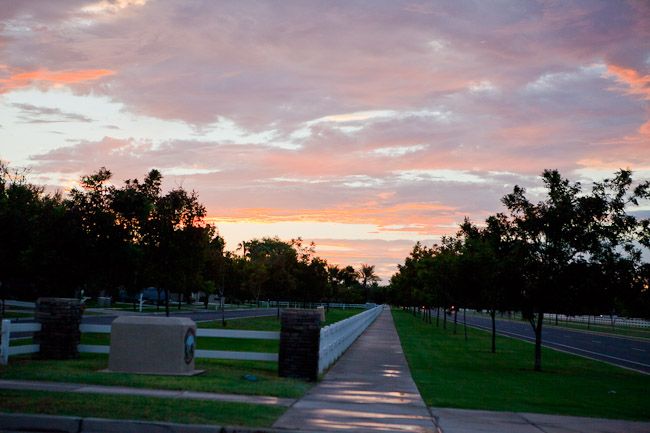 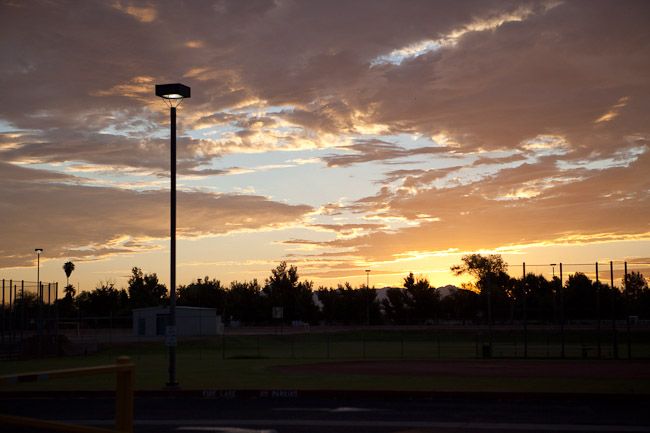 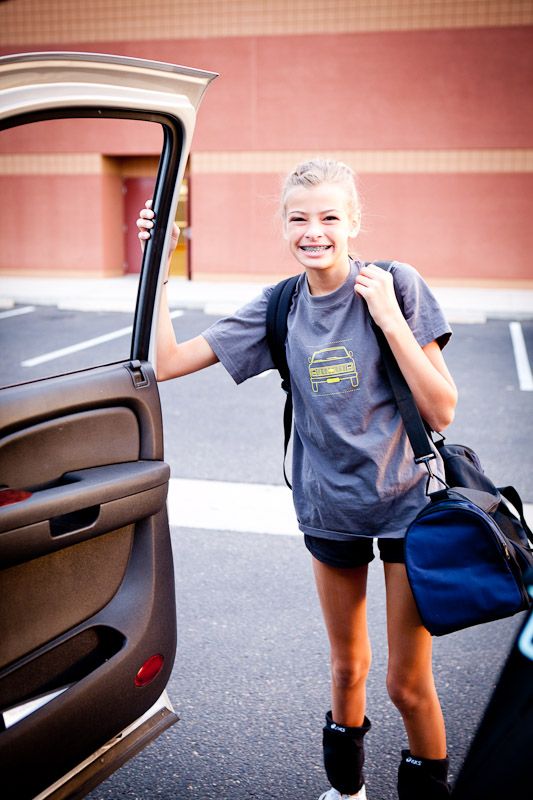 The first day she came home with a smile on her face. Although she felt silly because she didn’t get a single serve over the net, she had worked hard and it felt good.

The next day her smile was a little bigger. And the next even more excitement seeped out of her face.

I started to worry that she was getting a little too into this. Remember this was just a good practice? We’re not supposed to make it because her tennis coach was already giving us the business about even having her tryout.

But on Friday she texted me after school: “I made it.”

That girl had worked really, really hard at something completely out of her comfort zone. And I could tell through the week what that hard work was doing to her self-esteem…and to her heart. I know this is easy to say in retrospect but I really think she would have felt just as good for trying had she not made it because she really put her all into it. She knew she did her best come what may.

When I went up the stairs to bed that night I found she had written this on our chalkboard: 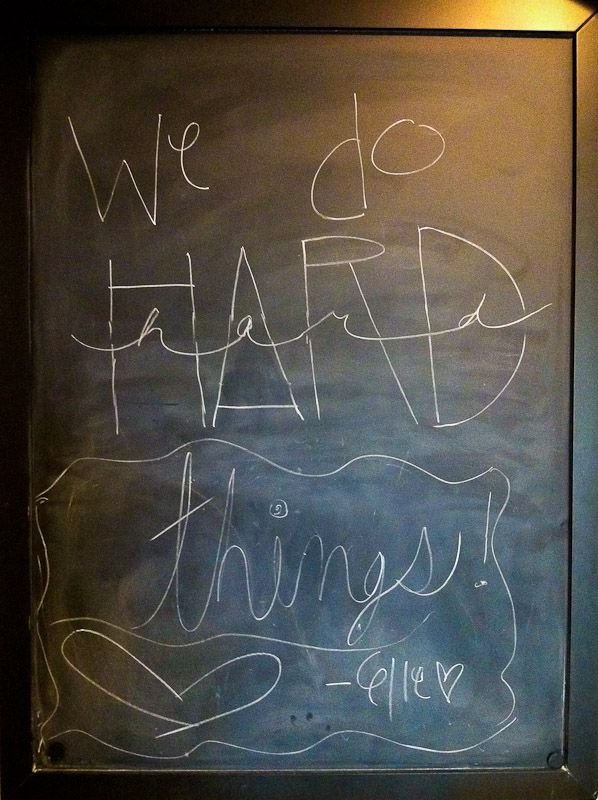 Yesterday I found myself in a “mandatory parent meeting” watching her with a group of smiling, good, mostly much more physically developed 🙂 girls who will quickly become dear friends and I couldn’t have been more proud of her. 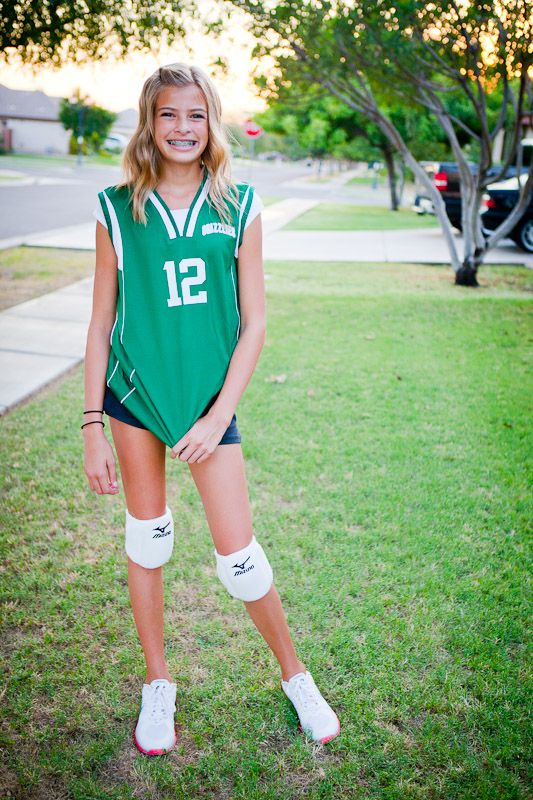 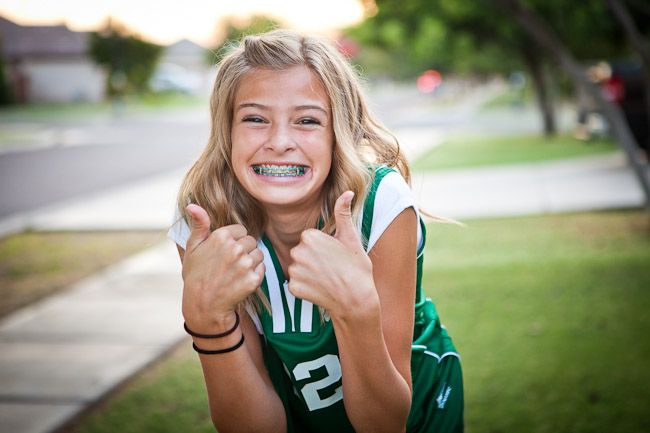 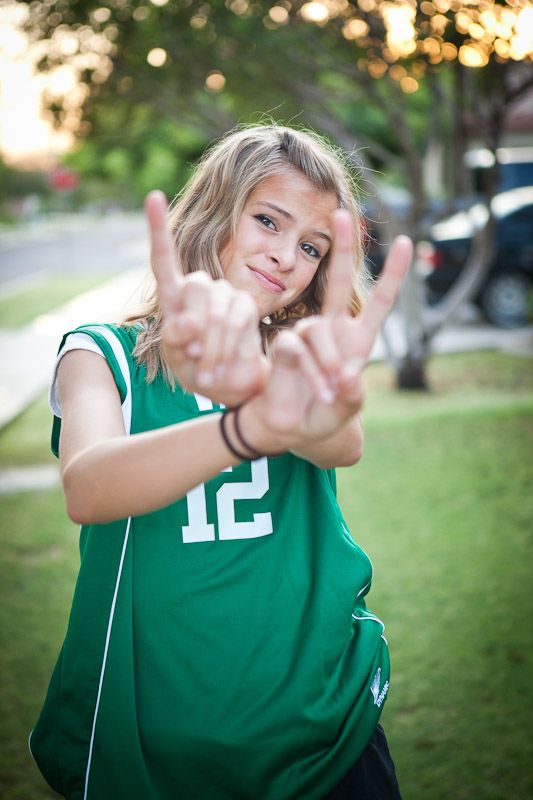 She knows it’s not all rainbows and butterflies from here. She knows she’ll sit a lot of the time on the bench because she’s the one with the least amount of experience. She knows she has to work hard to build up her strength (she asked if I wanted to do P90X with her the other night).

But I know she can do it.

Because she knows she can do hard things.

How I hope she’ll always remember that whether or not the result of those hard things is what she is hoping for or not.

p.s. remember about this huge give-away that ends tonight!

I am glad you wrote this today. My little ones start back at school tomorrow ( grade 2 & Kinder), and I had this nervous pit in my stomache. What if they are picked on, what if they struggle, what if… I need to put my faith in the lord, and in them.. We can do hard things! yeah!

ps, talking about 'hard things', i ordered your parents book 'talking to your kids about sex'. My daughter is about to turn 8, and i have mixed feelings about 'the talk'. we live in a tiny town, her school had 300 kids, and that ranges from kinder to grade 12!!!
Is 8 still a good age for that.. how did the talk go with your bundles?

That's so awesome! Volleyball was a big part of my junior high life back in the day and I loved it so much! I quit basketball in 8th grade and have regretted it since then, mostly because I quit because it felt too hard to me. I struggled with weight all through high school and always wondered what would've happened if I had just tried harder and gotten through it. Don't give up Elle! Way to go!

this so reminds me of how catherine (my younger sister who ended up being 6'2" tall and playing volleyball for byu) got started. she just tried out when she was 12 even though she didn't have much experience with it at all. she still says she wasn't that great when she tried out, but thinks her coaches were so thrilled about her height and agility they'd make a volleyball player out of her, no matter what. obviously, it worked out well! it's such a fun sport! way to go elle!

I sure needed that today: We DO hard things. The best to her!

how tall is she? shes gorgeous, maybe when she gets older she can model.

Shawni, your blog is the only one I check every single day! I just love it. I never comment, but I just couldn't resist with this post. Volleyball was my passion until college. That is so exciting for Elle! Volleyball is a great sport!! I learned some great lessons from it. Can't wait to hear more about Elle and her volleyball season!

I love that she is going to play volleyball.
"We do hard things" if a favorite phrase around our joint. If they hear it enough, they'll believe it …right?

We can do hard things is a family motto of ours as well. I am always telling the kids they have to try, even it's hard or scary because they are a part of our family, and in our family…

"we do hard things!"

It's partly why I was so motivated to do a triathlon this summer… which I did, and finished. Because now I can tell my kids… remember when I did that triathlon? It was hard, (SO HARD!) but I finished and now I can say I did it. Because, you guessed it, in our family, we do hard things!

Quick question… How do your wake your kids up in the morning?

That is so wonderful! I grew up playing volleyball and LOVE the sport. (it's fun to watch too) I went on and played for Ricks College (now BYUI). I miss those years.

congrats to your volleyball player!

I just started following your blog last week!! Thanks for all the great advice/ideas! I can't believe how much you and your sister Saren accomplish in a day 🙂 Anyway, just wanted to say that Elle is the cutest!!… and Volleyball is a blast!

Congrats to Elle! As the season goes by & she keeps working hard, she will catch up with the other girl's skill level, make new friends, and enjoy her school experience even more. 🙂

My daughter went to the BYU Folkdance audition this year and even though the tryout was for 2 whole days of difficult dancing, she said, "I can do hard things." and loved every moment of the experience.

How do you set up your garage with the black sheet to do portraits? Do you use lighting or just the natural light that comes into the garage?

I'm happy Elle made it. It's a very interesting spin on the whole situation. Elle is tall. VB coaches drool. They will quickly learn what a great asset she iis to the team and great leader for the other girls.

Congrats to Elle! She's doing all kinds of hard things this year. What a great character builder! Love that girl!

May I suggest a book to you called "Do Hard Things" not that you need to be reading another book with what you've got going on but I'm sure your teens will love reading that book it is Christian based written by two teenage brothers. Go here:
http://www.therebelution.com/books/

I had an almost exact experience to Elle – my parents told me I should try out for the volleyball team (I was in 6th grade), and I made it without having much experience. I actually went on to play in high school and in college, and then coached a local high school team after I graduate from college a it has been a love of mine since 6th grade! AND – my number ever since that first year was 12 :o). Good luck, Elle!

(wow, sorry about the spelling in my last post – darn iPhone keyboard!)

So excited for Ellie! She will LOVE it! Such a fun sport for girls.

The other day, I was thinking of a challenge I was having that week. Then the words, "We do hard things" came to mind, as well as this chalk board. Thank you for sharing! I LOVE your blog! So uplifting!!!