Home parenting Friday Q & A
parentingQ and A

We are having a major problem with arguing between our 9 and 7 year old boys (they are the oldest of 5 children). I know brothers close in age are going to argue, but it seems constant and immediate.  Also the 9 year old will sometimes yell and scream and threaten his brother. This is not okay with us and he knows that and receives consequences, such as not be able to play with friends, having to stay in his room, etc.
What do you think is the best way to address bad behavior issues? This does not seem like something that should be tied to money. We think we should make our consequences more severe, but have not yet decided on what that would be. We also want them to learn how to deal with conflict in a level-headed way. The magical solution to fighting in my book is what we call the "fighting bench"…except that it’s really not a bench, it’s a stair on the stairway in our house.  I know, confusing, but we call it the “fighting bench” because we did this in our house growing up and we did, in fact, have an old church pew that kids sat on when they had an argument. 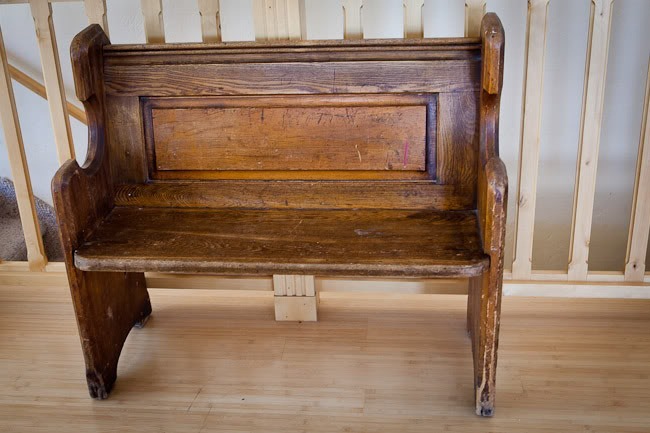 I’m telling you, it worked wonders to transform us nine kids into the best of friends.  How I hope this idea will work it’s magic with my kids too (even though they sit on a stair instead of a cool bench).  I explained how it works back near the end of this q & a post:  http://www.71toes.com/2011/08/friday-q-the-early-years.html …and then I talked about it again with a few additions near the end of this one:  http://www.71toes.com/2011/09/friday-q-parenting-stuff-part-1.html I honestly think if you stick to that each and every time the kids argue it will have miraculous results.  If you happen not to be at home when an argument breaks out…at a store, or at a park, or even at their school, there is always a spot you can find for them to sit together and work it out.  This is one of my fav. parenting tactics (thanks mom and dad). I have two questions about when your kids were younger, like toddler-aged. First, how would you teach them to be reverent and quiet during church meetings? Did you have a reward system or did you keep them occupied with snacks, books, or other quiet activities? We had a church bag with stuff in it for various ages: coloring, beads to thread, quiet books, etc.  But man alive, I was always so in awe of those families who brought scarcely a thing as we juggled around all our stuff.  After that we tried to pack as minimally as possible, and to keep is as Christ-centered as we could. We had an awesome system that worked well when the kids were little: Because we have a family tradition of making cookies every Sunday afternoon, they started out with “three cookies” when church started, and then they lost them gradually if they acted up.  Then when we made the cookies after church, they got their reward.  The cookies were small-ish, but for some reason this worked pretty well.  We don’t believe in a bunch of junk food, but Sunday cookies are kind of a must around here. Now that the kids are older we have something Dave made up called “ROC” which stands for “Renew Our Covenants” since that’s what we’re doing during the sacrament.  If kids forget to focus on what that special ordinance is all about, we “rock” a little in our seats to remind them.  I love the opportunity to focus more on Christ, and that the kids are getting old enough to really get it.  Lately we’ve just been bringing a paper and pen with us for Lucy and she draws or writes words…or we write church-ish words for her to try to sound out.  Second, did you have a system that worked well for getting your kids to go to bed and take naps and not keep sneaking out of their bedrooms? It is really weird but our kids didn’t really have a problem with this.  Maybe because we were miraculously lucky, maybe because Max did it well and the others followed suite.  Or maybe because we had absolutely no tolerance for getting out of bed.  If I had to sit by their rooms ‘til they were asleep I did, but we made sure they were well-aware that they needed to get drinks, go to the bathroom etc. before we turned out the lights.  Then, “too bad, so sad” if they decided they needed something after we tucked them in.  What will you do if Elle wants to date before she is 16? and do you class ‘hanging out’ with friends of the opposite sex, as ‘group dating’. Much more on dating and that stuff back here.  Also a little more at the end of this post. What time do you head to bed most nights, and wake up? and Do you and Dave go at the same time when he’s home? We try our very best to go to bed by 11:00 and yes, I always try to wrap things up so I can go to bed with Dave…or he tries to patiently wait for me ‘til I’m ready.  It works sometimes better than others.  We wake up at 6:20 because we have family scriptures at 6:30.  Elle and Max get up a little earlier cause they have to be totally ready before we start scriptures.

you’ll find what you’re looking for

books and talks and eye-rollers

what I learned from our Collin Kartchner night,...

I'm going to repost my question because I'm worried it will get lost in the shuffle since I put it on a random Halloween post that had nothing to do with parenting question. 🙂 So here it is:

Did you/do you have any pouters? If so, how did you deal with that? I have a boy that gets this really grumpy face and pouts at the drop of a hat. He drags it on way too long and often storms into his room or hides somewhere. I really don't want his social skills to suffer from his pouting, or worse…his future wife!

I read about the "repenting bench" a long time ago from something of your parents but I have always wondered what if you have a strong willed kid that wont sit on the bench– especially when they are already fired up?

I'm really thankful to have found your blog. You're such an inspiring mom because you seem REAL and driven in your parenting choices by faith. I love that. I did a quick search, so maybe I've missed your discussions about Christmas gifts/Santa. I read the traditions post, but I'd love to hear how you combat the commercialization, excess and greed encouraged by society.

I have been reading your blog for a few weeks and I LOVE it! I am a young mother (with an almost two year old and a baby due soon) and I've found it so inspiring! You've given me a lot of food for thought. And thank you for the lettuce wrap recipe- it's delicious! I've already made it twice!

I really like the idea of ROC during sacrament meeting. We have older kids, like you, so we're not trying to "entertain them" during the meeting anymore- thankfully. But, I sometimes feel like they are not really attempting to focus on the sacrament or the messages being shared. Thanks for the tip!

This blog is really informative for students who learn online. Thanks for sharing information with us regarding Assignment Online keep continue.

Oh my goodness, I love that first question because I'm going through it big time with my 10 & 12 year old sons. My 12 year old is taller and bigger than me (and I'm 5'6") and my 10 year old is average size, so my 12 year old could really hurt his little brother. They are best of friends most of the time, but when they fight it's awful. I wonder if my 12 year old is getting too old for a bench or step, but I'm going to give it a try!

Shawni, I have a question that was brought up on a girls night, and i have been thinking about it since… i would LOVE your thoughts!!

How would you feel if one of your children decided that they did not want to go onto further education?? they wanted to finish high school and that was it. Or they decided to work in a trade, or apprentice, and not go for a degree. Does Max & Elle have any clue what they might want to do yet? We had a very good discussion on it, it was quite interesting to hear everyone's thoughts on the matter.
heidi

Your blog is great. I love enjoying the reading
Debt Advice

Your blog very informative. Being a school teacher these blogs really help me out
Research Writing