January 24, 2013
This recipe is from our church cookbook and it makes me salivate to think about.

It is super-duper easy too, and that is always a good thing when you’re in a hurry.

Sometimes I make extra chicken and freeze it in a Ziploc bag so I can whip these up again lickety-split when I need/want to.

First you cook three or four large chicken breasts any way you like.  I usually sauté mine in garlic and onions until they shred apart (more on how easy that is in the middle of this post), but you can boil it too if that seems easier.  It’s also super easy to just use the rotisserie chicken from Costco.

In a bowl, mix up the marinade:

Mix in the marinade with the cooked chicken: 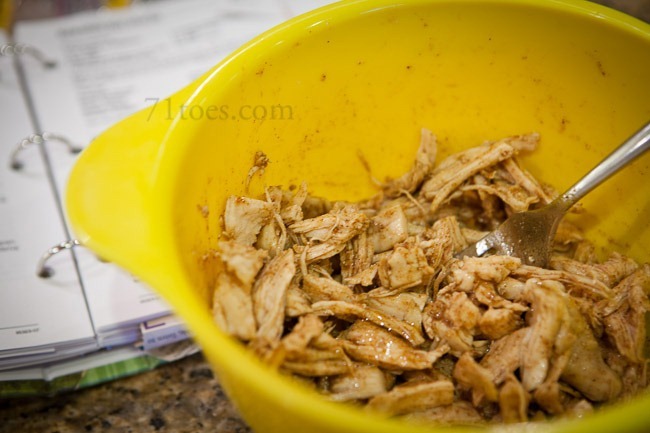 Let the chicken soak in that marinade in the fridge for a little while…overnight would be ideal, but I’ve done it before without letting it marinate and it’s still pretty darn good.

(If I made enough chicken mixture to freeze some, I do it with the marinade already on it…so easy to whip it out next time you need it.)

Fill 6-8 tortillas with shredded cheese and equal portions of the chicken mixture.

Spread a layer of green enchilada sauce in the bottom of a 9×13 pan (sprayed with cooking spray).

Roll up those tortillas nice and tight and place them open-tortilla-flap down in the pan.

Spread another layer of enchilada sauce over the top: 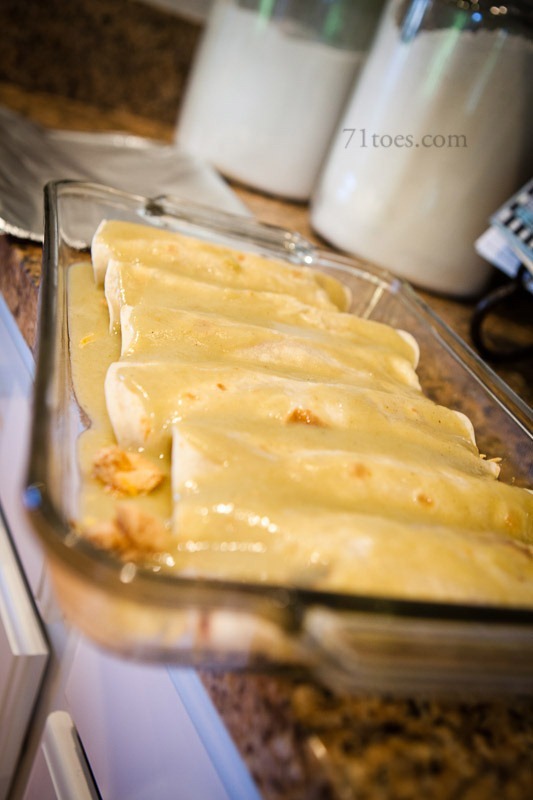 Then sprinkle the remaining cheese over the top (and don’t let it fall off the counter which it looks like it’s about to in that picture up there…rest assured it made it safely to the oven). 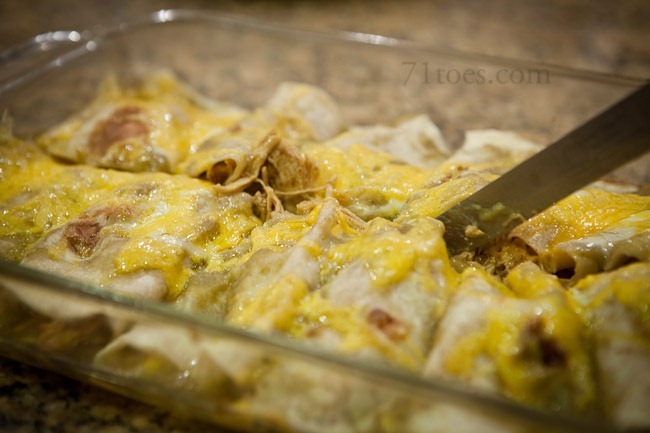 Serve with a little sour cream if you like that kind of thing. 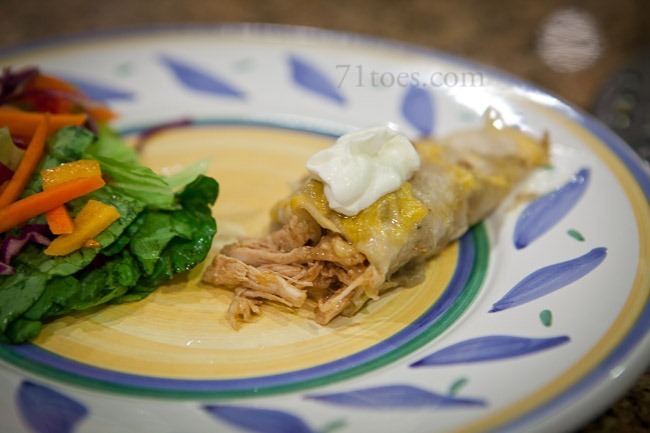 some recipe tweaks, just in time for Thanksgiving

Thank you Shawni! Our family has enjoyed your recipes.

Looks delicious! Can you really feed your family of 7 with only 1 pan?!

Oh wow, never thought of adding honey to enchiladas. Must try this! My kids already adore enchiladas normally, changing it up a bit will be fun.

This looks delicious! I'm actually vegetarian but there are fake-meat versions of chicken which I am sure would work just as well. I shall have to buy some enchilada sauce (it will have to be red, green doesn't appear to be sold in this country!).

My Gilbert, AZ sister shared this recipe with me not too long ago and we probably have it twice a month! I love to open a can of black beans (rinse and drain them) and then add a spoonful to each enchilada. Definitely kicks it up a notch, and adds some good protein!

P.S. – Thanks for your recipes. Making your delicious lettuce wraps tonight!

do you fresh lime juice or the kind in the little green plastic lime looking thingy you can buy?

you could switch the flour tortillas to corn to make it gluten free. we actually make these with corn tortillas instead of the flour. Very yummy!

I make this recipe too, but I substitute the honey for agave nectar. It is a bit healthier sweetener but we also prefer the taste significantly more than the honey.

Dandi, I just use the lime juice from a container. The little green plastic lime looking thingies are cute, but with a recipe like this you'll use it up pretty quickly! Most grocery stores will have bigger bottles of lime juice (and lemon juice). I think I find mine in the juice aisle. Good luck. It's mighty delicious!

We love these at our house. I make them all the time. IT was fun to see the recipe here.

church cookbooks are the best! recipes made in a regular kitchen, with non fancy appliances and gadgets we all have on hand. so much better than test kitchen recipes any day.

This is what's for dinner tonight! Thanks for the simple recipe!

I made this for dinner tonight and it was a hit! Thanks Shawni!

Oh man, I'm so hungry. That food is to die for!

I made these last night and they were a hit with all seven members of my family! 🙂 And, let's face it, anytime that happens I do a little happy dance. So thank you for the recipe!

My boyfriend and I made these last week, they were soooo yummy! We just used red sauce instead of green sauce since I'm not a fan of that. Will be making them again!

Oh this is one of our family favorites! Our recipe just adds 1/2 t. garlic powder to the marinade. And homemade guacamole on the side is AMAZING!
Here's our fav recipe:
Mix: 3 avocados, mushed
1 juiced orange (add to taste, not too much)
1 juiced lime (fresh lime is the way to go here)
1 diced tomato
1 t. salt (to taste)
2 T. cilantro (I usually add more)

Quick question about your q & a on the repenting bench – does that work well for young toddlers? I have a 3 and 2 year old and we need some help 🙂 And also my 3 year old little boy really struggles with pouting and just easily falling apart and complaining. Do you have any thoughts about what to do?!

Keep being a wonderful influence for good. I so very much appreciate you!!

This may have been mentioned already, but when I make this recipe (mine is very similar) I use corn tortillas instead of flour. I actually prefer them that way + bonus for you- it would be gluten free!

Thank you for sharing, I tried it this week and LOVED this – so did my picky eaters! I was wondering why you marinate the chicken AFTER it's cooked? Maybe next time I'll do it before, that seems more… proper? 😉 And I added some adobo sauce to the marinade, it made it extra AWESOME. That recipe is SO a keeper!

Made this last night and . . . hello, YUM! Definitely a keeper. I made half with corn tortillas, half with flour. They were both great – I preferred the corn, my husband preferred the flour. 🙂 I served with sour cream and homemade guacamole. SO GOOD!