Love this look of wonder after “little” Max wh

A little Memorial Day weekend run with the guy who

look for the helpers

Yesterday my friend forwarded me a beautiful email her very eloquent Mother had sent her about the Boston explosions.  In it, she talked about the Mr. Rogers (yes, the one and only) quote that has been in the news so much: ’When I was a boy and I would see scary things in the news, my mother would say to me, ‘Look for the helpers. You will always find people who are helping.’ To this day, especially in times of ‘disaster,’ I remember my mother’s words, and I am always comforted by realizing that there are still so many helpers – so many caring people in this world.’ ~Mr. Rogers. I love that thought of helping children (and ourselves) shift focus from the darkness to the light.  Here’s a little excerpt from the email:  “the idea [from the news coverage] was that [Mr. Rogers] felt sure that if [children] would cultivate an eye for the good, they would surely see beautiful, kind behaviors emerge in response to the horrible ones, and that those kind behaviors would offer a healing, hopeful alternative to the ugliness that had left them full of fear. So, the Mary Poppins in me has turned from the video segments of the horror of the blasts to the images and stories of the Good Samaritans who promptly stepped forward to be helpers. The light will forever crowd out the darkness.” I just thought that was so beautifully put.  It lingered in my mind when I saw this picture my friend put on Instagram: 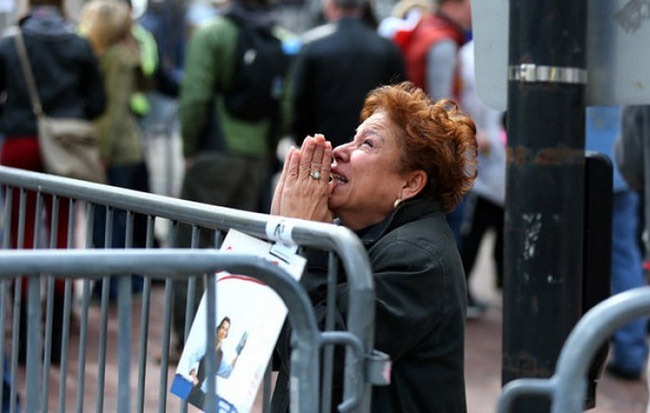 …and brought tears to my eyes as it reminded me how I want my first response to things like this to be just like this woman’s was.  Yes, there is darkness in this world of ours.  But there is also goodness and hope and light.  How grateful I am for that light that will, as my friend’s wise mother stated, “forever crowd out the darkness.” The “look for the helpers” quote made it’s way into a completely unrelated conversation Dave and I had last night and I realized it can relate to everything in life.  It’s not just in times of horror and devastation we need to look for those helpers (or for that light).  There are “helpers” (translated in my mind as inspiration, light and beauty) surrounding us every day.  If we LOOK for them and recognize they are there rather than focusing on frustration about the mundane and trivial things that come along our paths, light fills in all the nooks and crannies of life and feeds us love and hope rather than worry and despair. I’m committed to look for those helpers a little more as I seek to become a better helper myself.

pre-Mother’s Day weekend thoughts and a solo from...

we are quickly losing the idea of a...

Two ways to learn the beauty of forgiveness

a plea for prayers and a hymn from...

Shwani, You have been very inspirational to me. And I'm trying so hard to be better at blogging but it just hasn't happened however last night I made a full effort not only did I write a post (i have several drafts written) I actually published it and finally put up an acutal post. And it was exactly on this same topic. However my little twist was on being a helper not just looking for the helpers. I want my kids to be those helpers too. Anyway thank you so much for all of your inspiration! If you feel so inclined here's my blog halikeihavetimeforthis.blogspot.com
The name stands as true today as it did several years ago when I first tried (and failed) to blog. Thanks again

This is a wonderful reminder. Thank you so much!

Thank you so much for sharing! We need to hear and read things like this more often. I want to always be looking for "the light."

beautiful… that mr. rodger's quote has been my mantra since the sandy hook tragedy. in times like these i hold my breath, waiting for one of my four children to ask me about what has happened. i used to be more afraid of facing that moment, but the notion of looking for the light and seeing the good is a concept and a comfort that i know i can offer to them should the need arise. love your blog, and love mr. rodgers. 🙂

For ideas that totally build on this and help you know what to say to your kids about tragedies, check this out:
http://powerofmoms.com/2013/04/deliberate-mothering-ideas-for-handling-tragedies-episode-52/

Thanks for your post – every day I try to be the good. Try to be the helper. And try to find the helpers and to 'do good' people out there. IN life, to look out in hope, look for the good, will always be far more rewarding that pointing out all the faults.

This is perfect. You say things so well. I was just reading in Mac Bledsoe's Parenting with Dignity these words "Develop a habit of having something good to say so your kids hear you talking about what is right rather than what is wrong. The ideas in your kids heads will rule their world. You may think you are talking about how things ought to be, but often the idea that kids pick up is that everything is wrong and nothing is right. If you spend time talking about what is wrong with the world, the "wrong" is winning! Talk about what is right! That is how wrong ideas work. Somebody does something hurtful or hateful and then we read about it, talk about it and the wrong idea begins to occupy our thinking. We must take control of that in our homes. We need to talk about good things and positive ideas! If you want your kids to have a positive outlook, you need to talk about good and uplifting things." Thanks for pointing out all the good I can look for in this tragedy.

I love your post and your words – and I love the words of those who have commented as well (thanks Maurlo).

I had read the Mr. Rogers quote and I really appreciated your furthering the idea of "helpers" to mean inspiration and light. My sister-in-law was running in Boston and crossed the finish line within minutes of the first bomb. She finished the race differently than she had planned, which brought her across the finish line sooner than she otherwise would have. Had she delayed she could have been harmed. I think she had her own "helper" that she listened to on Monday and I am grateful for the inspiration that she lives worthy to receive!

Thank you for this. I really love that perspective.

Beautiful post! Thank you for sharing, I love your insight. I apparently don't watch much news or get out much because I haven't heard that quote by Mr. Rogers before. I love it! I am going to try to focus on those things more in my life as well. Thanks for your thoughts and willingness to share of yourself. 🙂

Thanks for the awesome giveaway!