Home quotes good timber does not grow with ease…
quotes

good timber does not grow with ease…

November 6, 2013
My latest favorite quote that I have given my children an opportunity to memorize for their pleasure 🙂 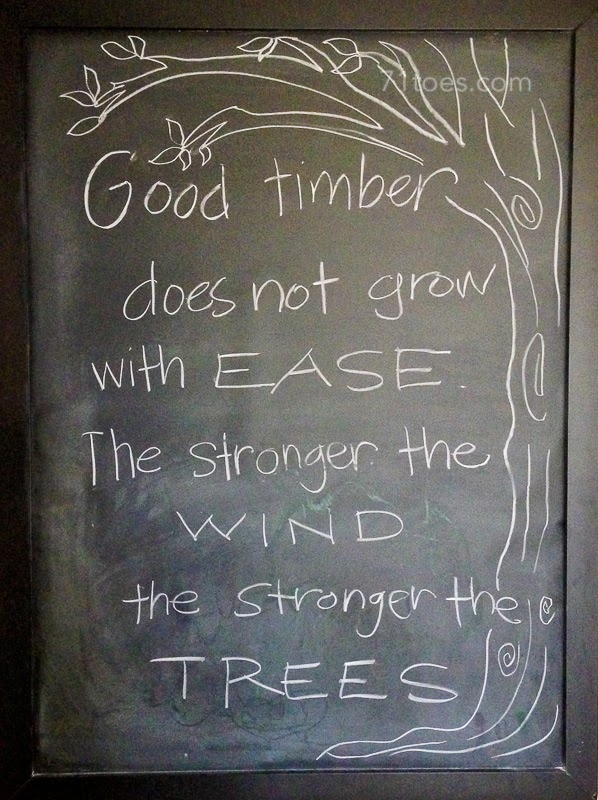 (We give them the opportunity to memorize set quotes or scriptures each week to make up for missed points in our whiz-bang responsibility system back HERE….and I always write the quotes on my chalkboard I talked about back HERE.)

This was part of a poem quoted by President Monson in his talk over HERE.

Good Timber
by Douglas Malloch
The tree that never had to fight
For sun and sky and air and light,
But stood out in the open plain
And always got its share of rain,

Never became a forest king
But lived and died a scrubby thing.
The man who never had to toil
To gain and farm his patch of soil,

Who never had to win his share
Of sun and sky and light and air,
Never became a manly man
But lived and died as he began.
Good timber does not grow with ease:
The stronger wind, the stronger trees;
The further sky, the greater length;
The more the storm, the more the strength.

By sun and cold, by rain and snow,
In trees and men good timbers grow.
Where thickest lies the forest growth,
We find the patriarchs of both.

And they hold counsel with the stars
Whose broken branches show the scars
Of many winds and much of strife.
This is the common law of life.

I’ve sure thought about it a bunch ever since it hit me during his talk.

How important is that wind to create strong children and future adults!

of this be sure…

quote for the day

Loved seeing this on your fridge. One's thing's for sure…yours is not a life of ease! Loved being slammed into it for a few days. De ja vu!

The sentiment is nice but I wish it was written to apply to both genders… It's not just men who need to be strong and learn through struggle!

Just because the poem was written in a male point of view, doesn't mean it does not apply to either sex. Sheesh, not everything has to spelled out. I have no problem applying this to myself as a woman. I don't think it implies that it is for men only.

What a wonderful poem, a powerful message indeed. Thanks for sharing.

I have had my kids memorising this entire poem at the moment. I had been meaning to start them on learning quotes and poems after reading how you approached it in your family. This seemed like the perfect one to start with after Conference. Super surprised that my 8 year old nearly has it all memorised so quickly!

Thank you for sharing this, I really needed it today. It helped me remember the struggles I am experiencing in different areas of my life will only make me stronger and better prepared for the future.

Sorry to comment off topic, but I thought you might know the name and/or author of a children's book I remember reading to my kids 20 some odd years ago. It possibly could have been on one of the Joy School reading lists . . It was story of the author's parents, grandparents, and possibly even great-grandparents with a little experience about each person and how they met their spouse and how the author came to be??

I remember this poem from a lesson my mom taught when I was in Beehives a long time ago. She gave it as a handout and I kept it for a long time, it's a good one. I really need to get a chalkboard and write some quotes, I love that idea so much!

Loved that. Thanks for reminding me of it:)

Thanks for sharing this! I need to give my kids the opportunity to memorize some meaningful poetry too.

My son had to memorize this in his school class for the month of September and was THRILLED to hear President Monson quote it! 🙂 And I love the message it taught him!

This was perfect for me to read right now. I recently lost my sister to a drug overdose and she left behind 4 beautiful children. I hope that we can help them to become that strong timber that this poem references. Thank you, Shawni.

I love this quote! For my oldest child's baby shower the ladies made a book of advice. One of my favorite nuggets of advice, and the one I try to implement daily went something like this:
"As hard as it will be, don't intercept his consequences to save him from them. You won't do him any favors by keeping him from learning life's lessons, especially while he is young and they are affordable."

I love the idea of having my children memorize different quotes and scriptures. If you keep one, I would love to have a list of the scriptures and quotes your family has worked on (or will work on) to get my family started. Could you post that on your blog or email me? pquadkris(at)Hotmail(dot)com Thank you for all the inspiration!