And she didn’t mean the “home-made” kind of home-made one you can find recipes for flooding the internet if you google “grasshopper pie.”  She meant the same one I made for Thanksgiving a couple years back because I don’t like “real” pies and I was assigned to bring a few so I branched out.

She still remembered it.

Apparently it was that good to her.

So I whipped it right up for her lickety-split.

And I figured I should share because who wouldn’t want this chocolatey, minty goodness for a treat now and then? 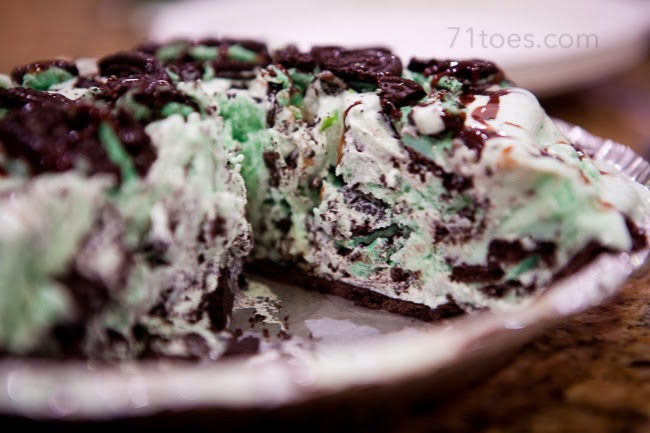 So here’s what you do:
Buy from the store:
–Oreo pie crust
–1.75 or 2 pint container of mint chocolate chip ice cream.
–mint Oreos (or just regular but those mint ones are pretty to-die-for in my book and I really don’t generally like lard…)
–Cool Whip
–hot fudge
We’re off to a healthy start, right?
Let the ice cream sit on the counter for a while ’til the carton is all softened up when you squeeze it.
Mix half of it with a couple heaping spoonfuls of Cool Whip in a bowl.  (You don’t have to use Cool Whip if you’re adverse to fake foods like that like I am…what’s up with Cool Whip and Cheese Whiz?  And why do I use Cool Whip??  I don’t really know, but I bet it would taste about the same and be even easier without it.)
Pour that into the Oreo crust.
Chop up half of the mint Oreos that are left over after your kids get home from school and eat a bunch of them without thinking clearly to themselves “wait, mom doesn’t generally buy these just for us to eat on a random Tuesday afternoon, maybe they’re not really supposed to be an after-school snack” and then they eat a couple more.
Put those chopped up Oreos on top of the first layer of the pie.  (The bigger the chunks the better in my book.)
Then mix the last half of the ice cream with a couple more spoonfuls of Cool Whip and add that to the pie.
Chop up the rest of the Oreos and top off your creation with them and some drizzled hot fudge.
Place in the freezer and let set for a few hours.
(It will melt like this if you only leave it in there for one.) 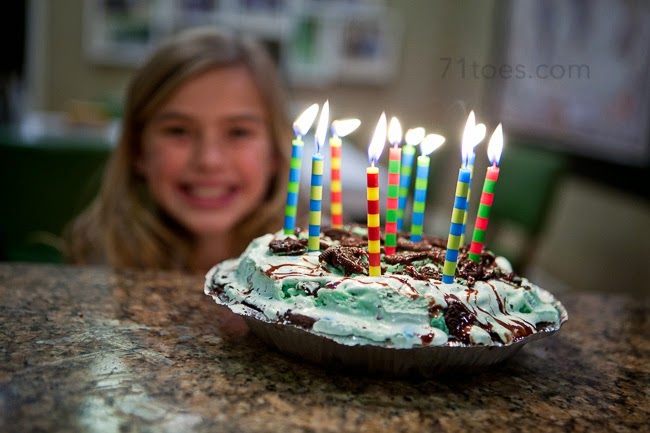 But it still tastes pretty darn good.
And I don’t even really like ice cream.
There you go.
12 comments 1 FacebookTwitterPinterestEmail

a note to my recently-turned-10-year-old

some recipe tweaks, just in time for Thanksgiving

Oh my goodness…that looks so yummy!! Thanks for sharing–I'll definitely have to make this for my crew. 🙂

Yummy! I love your blog (both words and pictures!) I look for an update everyday. I am not of the LDS faith, but I am a mother and a Christian and I respect your faith very much.

yeah, you forgot to mention that today is your birthday!!! shawni – i know that a million people who read this are glad you were born, but i am gladder, because i get to be your sister! love you so so much!!

Yummo! I have done the same one with orange sherbet and Halloween Oreos in October. Delicious.

I love your blog
followed
http://minimaysi.blogspot.co.uk/

Happy birthday Shawni!! Thanks for all you do!! 🙂

Yum! Have to wait to have some people to gobble this down. Hope your day yesterday was awesome and that you got our messages!

How does one use "shawni" as the promotion code for joy school? I have tried but can't find a place to enter it for a discount. Is there a spot I am missing?

Choosing the right footwear according to the activity being done is essential in doing it properly.
voip compare