July 3, 2014
My brother is a great cook.  He can whip up home-made bread or home-made sausage for that matter. Among my favorites of his specialties are his granola and healthy chocolate chip cookies.  While he was visiting us I had to add another one to my list of the favorites he creates:
Indian Butter Chicken 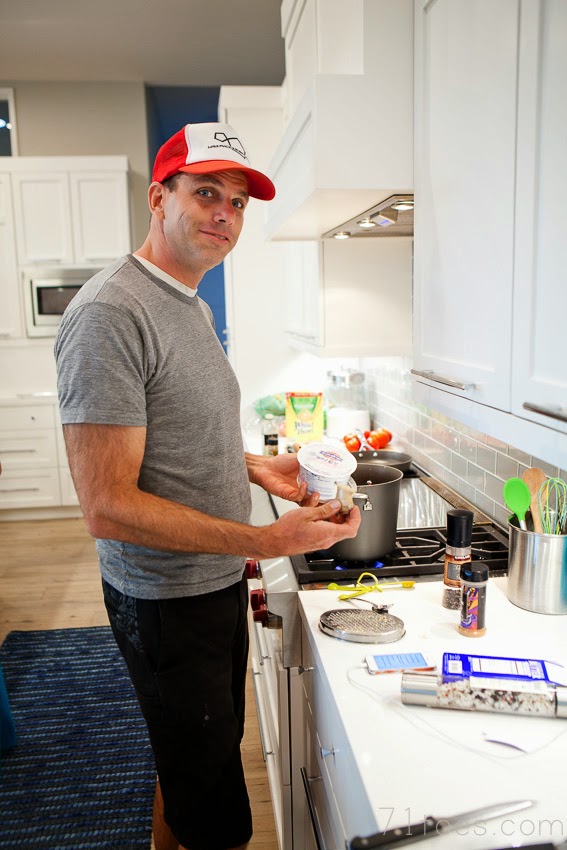 So I asked if he would share the recipe for the blog.
And here it is directly from the man himself:
Heat 1 tablespoon oil in a large saucepan over medium high heat.

Cook, stirring, for one minute.
Then add:
1 cup tomato puree (use some fresh tomatoes if you have them)

(Jo and Aja pureed their own in the vitamix): 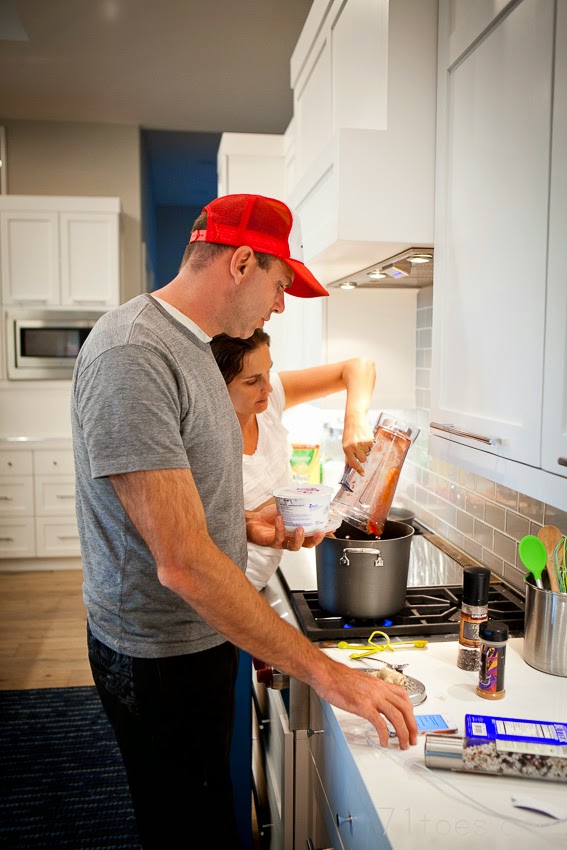 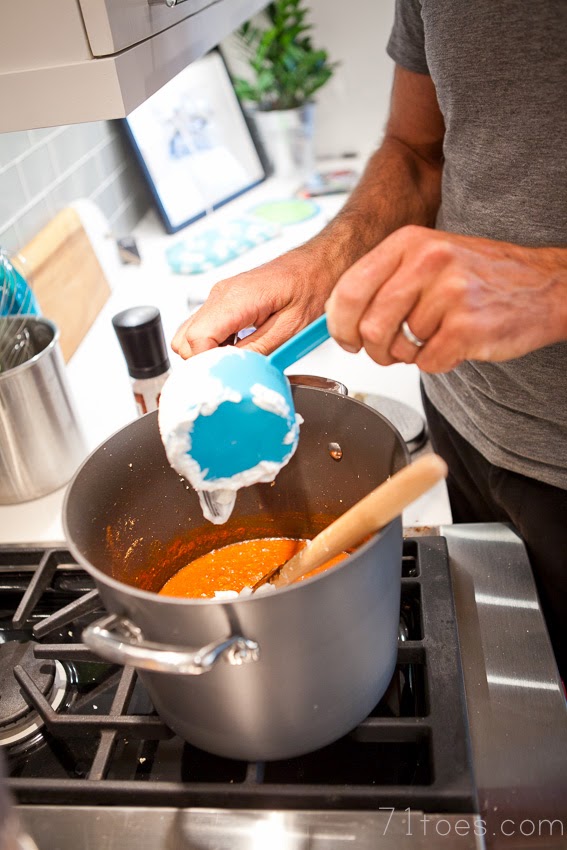 Reduce heat to low, and simmer for 10 minutes, stirring frequently.


Season with a few pinches of salt and pepper.


Remove from heat and set aside.

Meanwhile, chop up one pound of chicken into bite-size pieces. 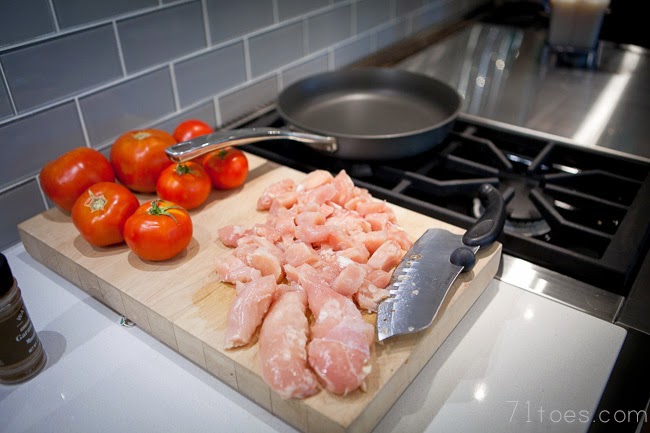 Jonah and Aja just grab a chicken out of their yard when they’re home.  I was glad we didn’t have any of those around 🙂 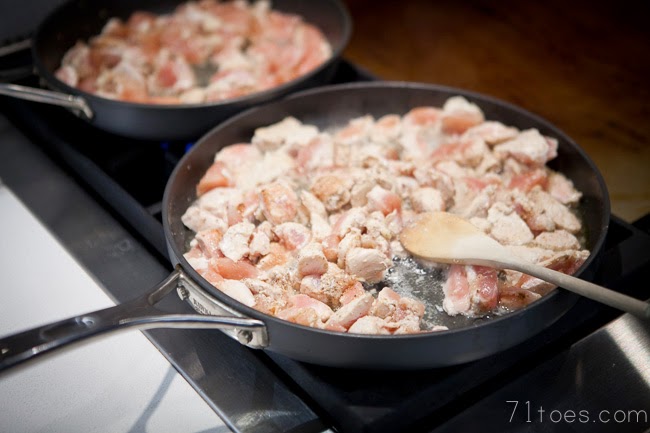 (We tripled this batch because there were so many of us…that’s why we had two pans.)

Stir in a few spoonfuls of sauce the sauce you have made, and simmer until liquid has reduced, and chicken is no longer pink. 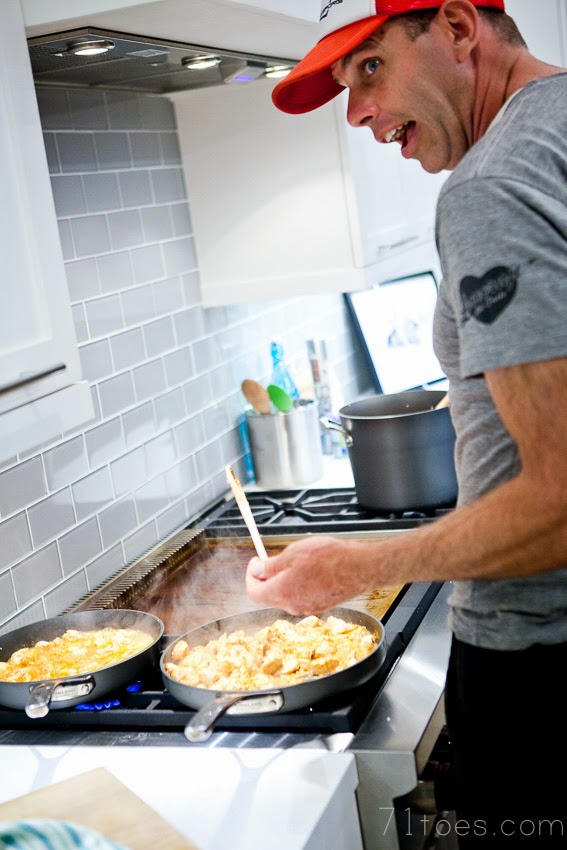 
Mix together
1 tablespoon cornstarch1/4 cup water
then stir into the sauce.


Cook for 5 to 10 minutes, or until thickened.
Serve with basmati rice and naanNaan(This is one of my favorite things we had when we were in India.  So fun to figure out how to make it ourselves.)

I loved how my nephew Camden was mostly in charge of this part, so automatically Claire was drawn in too. 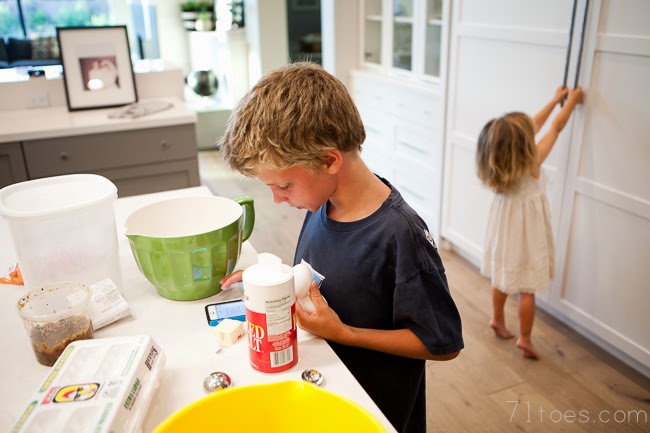 
Stir to dissolve then let sit for a few minutes or until it is frothy on top. 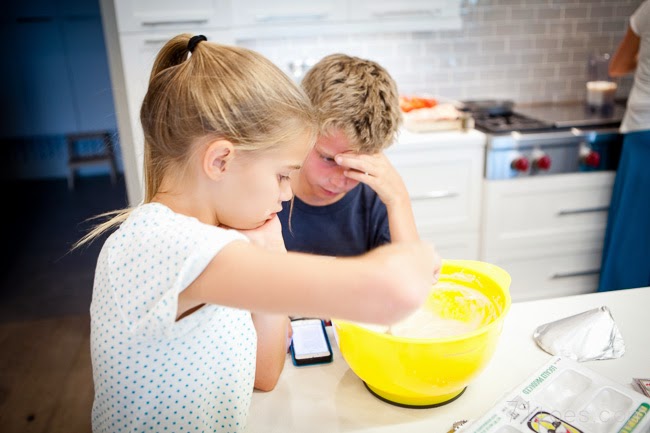 Then stir in:
¼ cup vegetable oil (coconut oil is better but either will work)⅓ cup plain greek yogurt1 large egg
until evenly combined.


Add the bowl of wet ingredients to the flour/salt mixture and stir until well combined.


Continue adding flour a half cup at a time until you can no longer stir it with a spoon (about 1 to 1 1/2 cups).

Put dough out onto a well floured counter top and knead for about 3 minutes, adding flour as necessary to keep the dough from sticking.


The dough should be smooth and very soft but not sticky so add flour as needed.
Loosely cover the dough and let it rise until double in size (about 45 minutes, but we didn’t let it rise that long).


After it rises, gently flatten the dough and cut it into 8 equal pieces (we had a lot more dough than that because the recipe was tripled).


Shape each piece into a small ball by stretching the dough back under itself until the top is smooth and round. 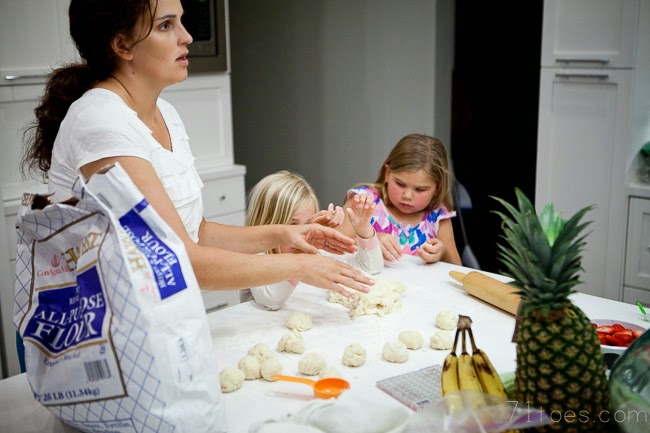 Aja and these little girls were in charge of that task.

Roll dough out 1/4 inch thick and about 6 inches in diameter. 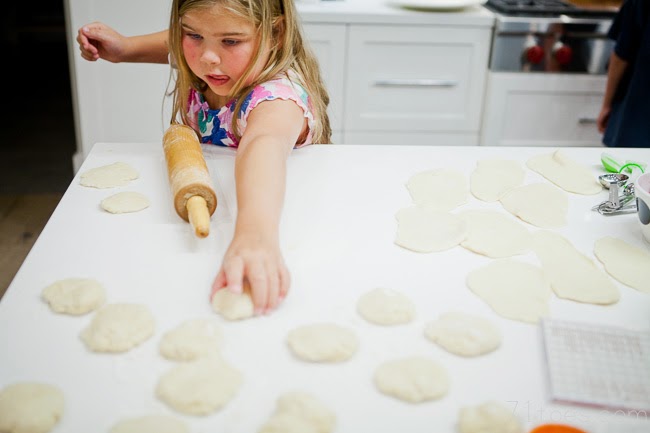 Lucy, after being mad she had to help at first, stayed with us until the very end.  She thought this was all pretty darn cool. 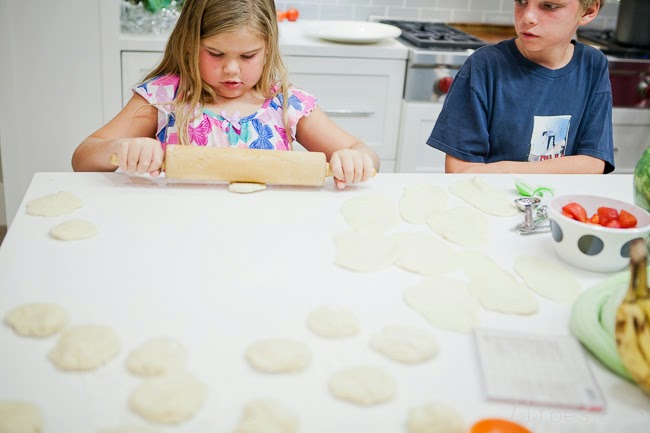 Place the rolled out dough onto the hot skillet sprayed with non-stick spray and cook until the under side is golden brown and large bubbles have formed on the surface (400 degrees seems to do it, but watch carefully so it doesn’t burn) Flip the dough and cook the other side until golden brown as well. 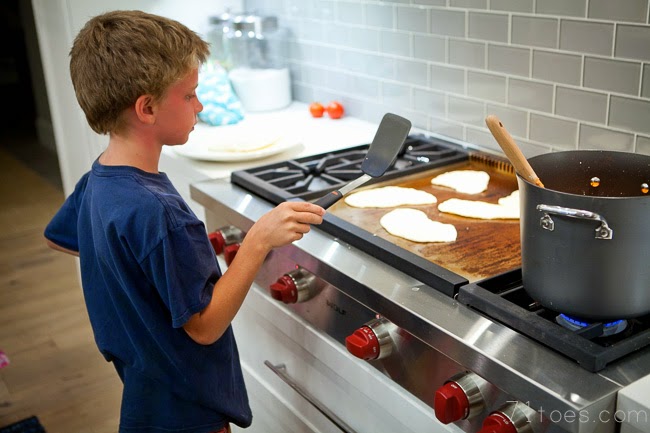 Camden did a great job with this.

…while Jonah stayed tutoring Lu on her job to get it done. 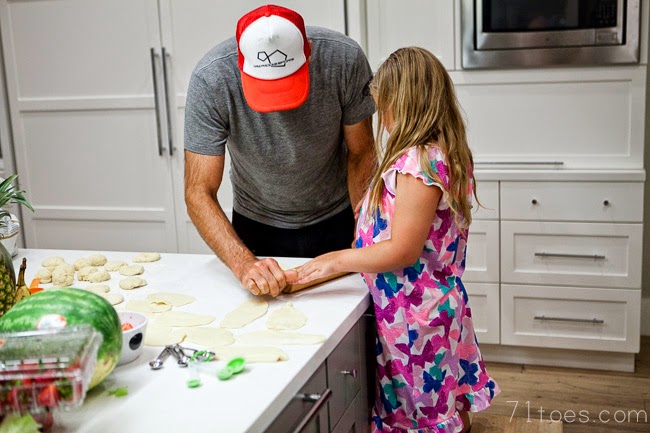 Serve plain or brushed with melted butter or put some garlic on there.


I LOVE cooking in the kitchen with people I love. 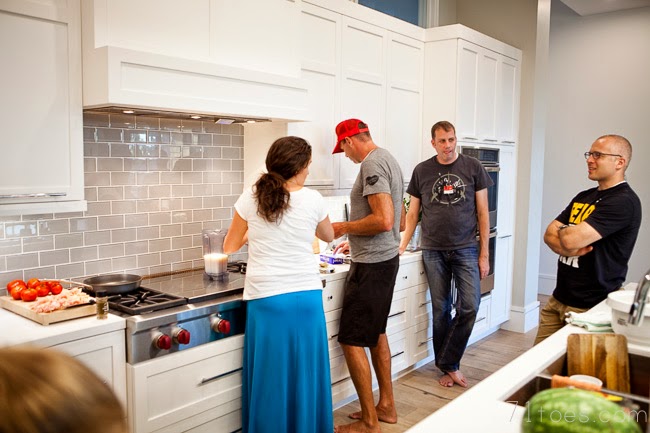 Serve up and enjoy together. 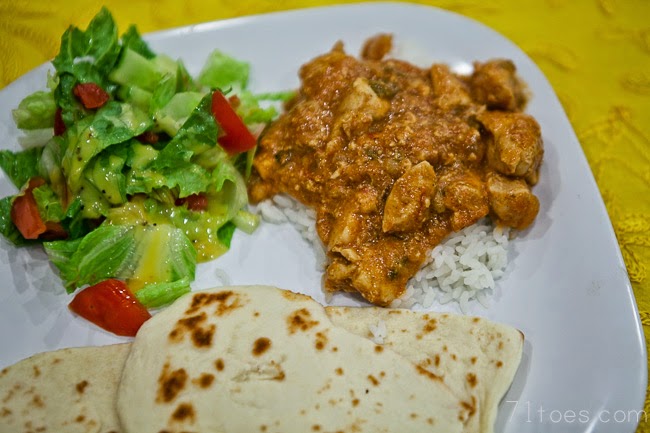 The picture where Jonah is stirring the chicken with the sauce reminds me of your dad. Not that I know your dad, but you know…blog stalking. This looks delicious!

Thanks for sharing your favorite recipes! I have tried several and they are now some of our family favorites too! I would LOVE your granola and chocolate chip cookie recipe as well. 🙂

Totally jealous of your kitchen that can handle so many people and jealous of the kids all being so active in helping at the different stages of dinner prep.

I can't wait to try all of this! Tell that sweet brother of yours to update their blog….they seem so interesting 🙂 By the way, when I see Jonah all I think about is that video you posted of your dad explaining the rules to something (money system?) and Jonah coming in and out of the shot 🙂

I can't wait to try this!

We made this tonight and it was fantastic. Thanks for sharing. 🙂

This was really good. A little time consuming but good!

I’ve made this probably a dozen times. Definitely a favorite. Thanks!