It is difficult to know where to begin.

In some ways it seems like we have been in China for a month, things have been whizzing by like nobody’s business.

We have done so many things in a few short days it’s tough to figure out how to chronicle it all…and to find time to download pictures!  So I will begin with the story of our journey to this place…and I’ll have to go back and pick up the pieces of the stories that happened pre-China later when things settle down a bit.  I want to start with what’s happening here and now as soon as I can take a breath.

A few things to note on initial observations:

–We have a great, old-fashioned home we were able to rent right across the street from the kids’ school
–The floors are super slippery…slippery enough I’m surprised no one has been seriously injured yet!
–It is gorgeous green here, the bugs are extremely loud, and we have had a lot of rain that makes things smell luscious.
–Lucy has been the best traveler known to man.  I am so grateful for her sudden ultra-maturity I can hardly stand it.  Crossing my fingers that it holds.
–Our LDS “branch” (smaller than a “ward”) is teeny-tiny.  There has only been one other youth in the whole branch until this week when our kids (and two other younger boys) showed up.  Everyone got released from their callings a while ago since so many people moved away over the summer so they have just called new “presidents” to every organization (Young Women, Relief Society, Young Men, Sunday School, etc.) in the last week.
–There are some amazingly nice people here…one of whom took me shopping today so I can feel more confident that I will actually be able to feed my family (the kids were a little worried for a couple days…).
–I went on the metro by myself today 🙂
–Our children are much more brave than I ever could have imagined.  It almost makes me tear up to think about.  They marched right into that new school on their own today…completely different culture, not knowing anyone else, knowing it was going to be pretty tough academically, still a little jet-lagged, and came out having learned more than they could have ever bargained for in one single day.  As Dave and I walked back home from watching them walk in after sending them off with our love and not letting on that we were nervous for them, we both shook our heads in admiration.  That is hard stuff.  And they did it.  Max and Elle also went to seminary at 5:30 this morning.  No one complained.  No one wept or wailed and threw a fit.

When you take a family of seven to live overseas for five months for part humid-hot-drenching summer and part frigid winter where it is hard to find food you are familiar and the plugs aren’t the same and you don’t know what, exactly, your sleeping arrangements will be, it’s a little tricky to know what to pack.

But man alive we sure worked hard at it!

The airlines sure have cinched up their allowable baggage these days.  Each of us could bring one 50-lb. bag and one small carry-on and one backpack.  So man alive, I will tell you we were going to get every thing we could in those allowable bags.

Our friends let us borrow their cool bag weigher and it was worth it’s weight in gold.

I wish I had a close-up, but you just hold it on the handles like Grace is below and it tells you how much each bag weighs. 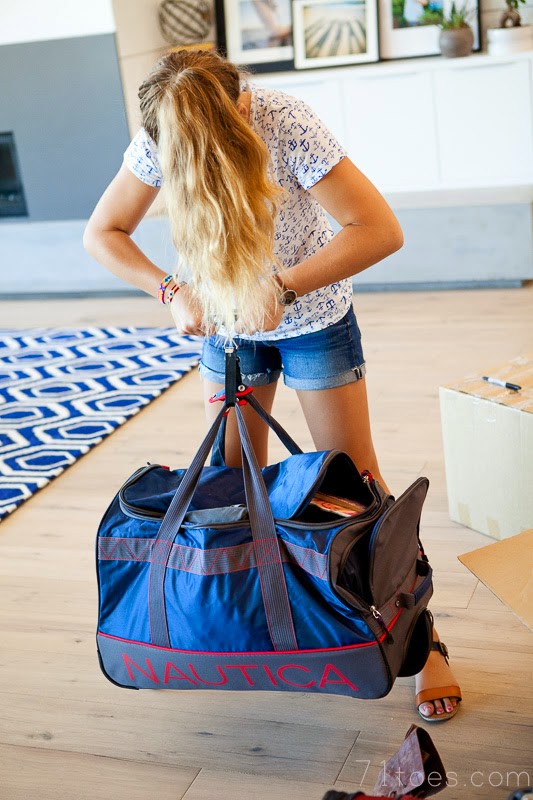 We moved shampoo from one to another and peanut butter or books all around until we got the perfect fit (which took forever and also made for interesting unpacking…).
We ended up with a few extra…not so cost effective, but we were wanted to be sure we’d have enough to get us through. 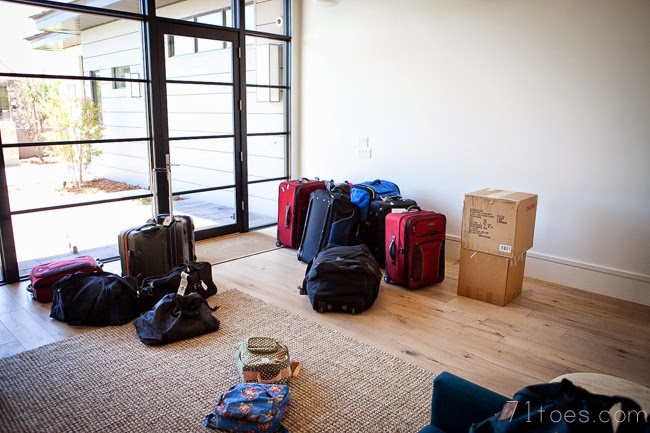 Max wanted to be sure that his skateboard made it first and foremost. 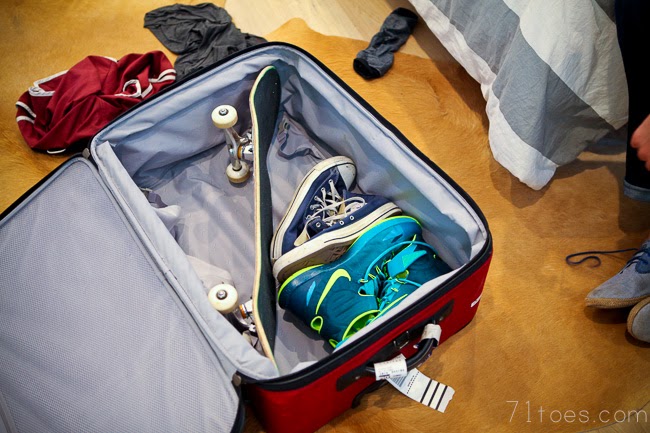 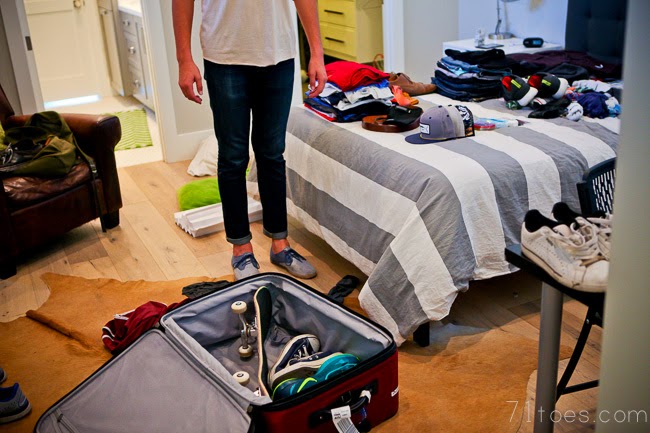 He was pretty impressed that we were able to get all that in. 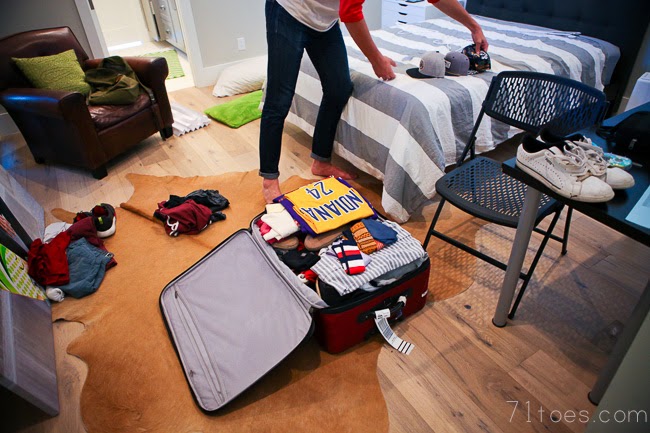 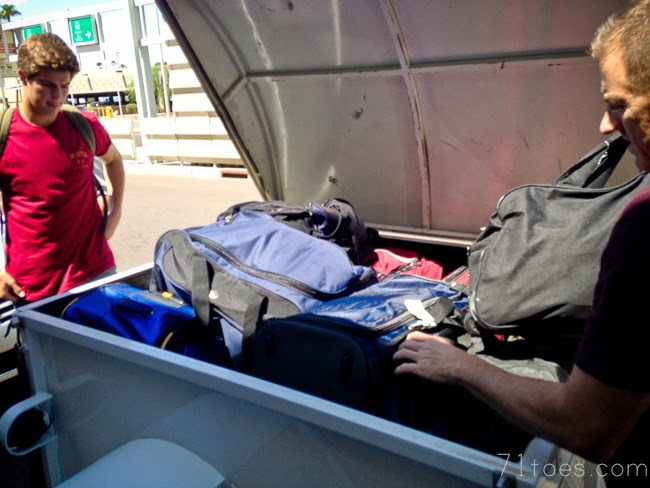 We were greeted at the airport by Dave’s parents who had just barely flown in the hour before from their adventure in Ghana for the last ten weeks (see their adventures over HERE).  How grateful we were that it just so happened our flights had an hour or so gap in between them.  We were so happy we got to give them big hugs before we took off and get a little bit of a run-down on their big international adventure before we took off on ours.  They had an extraordinary adventure they are so grateful for. 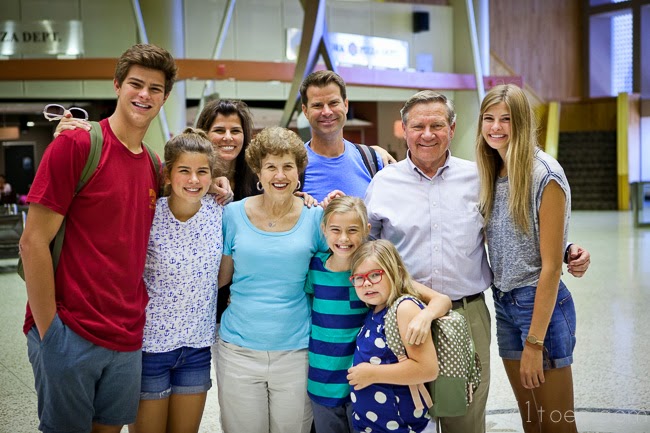 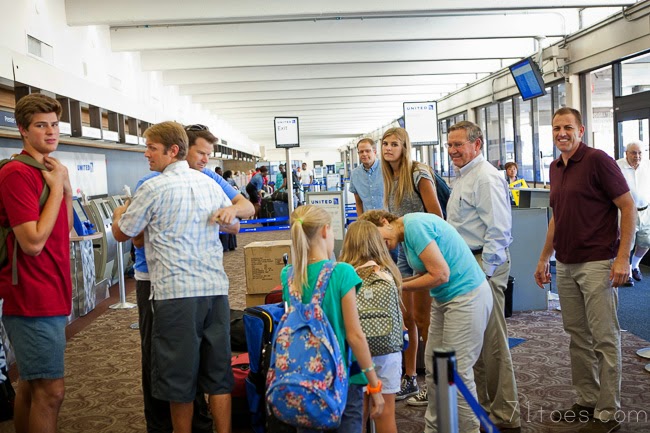 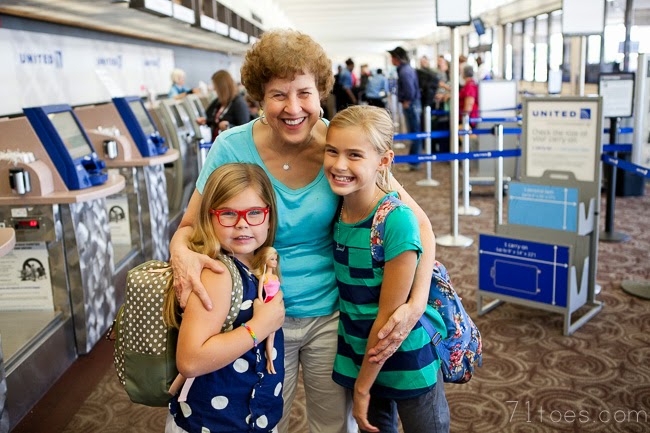 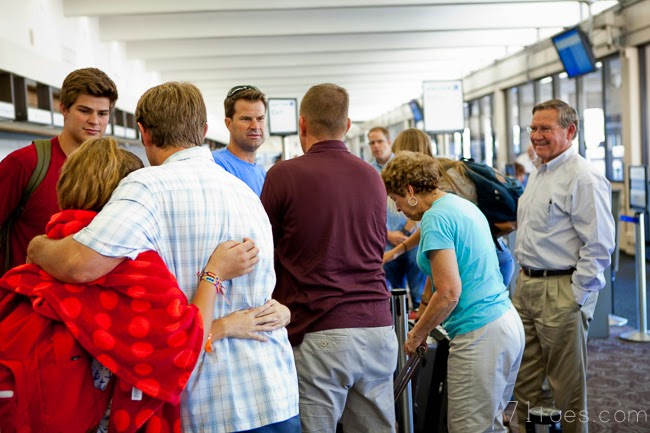 As we were saying hello to them and goodbye to good friends Mike and Denny (who brought us to the airport), Dave was weighing our bags and trying to sweet-talk the lady into letting us check them all the way to Shanghai (we had a layover in Chicago overnight).
We were pretty much on the money on those bags’ weights: 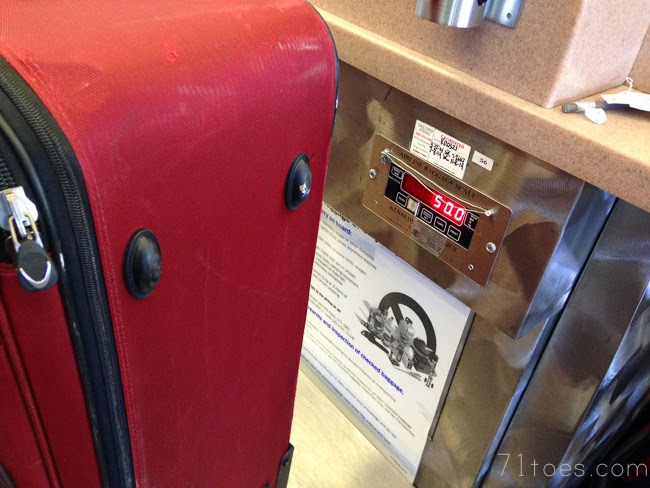 If there was any extra weight available in any of them, we shifted things out of carry-ons to get rid of it all on the flight.
And finally we were ready to go. 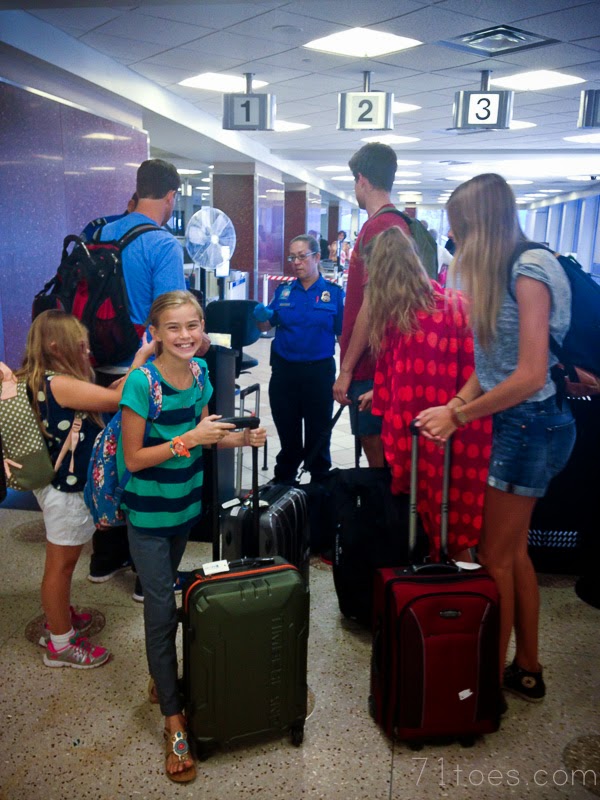 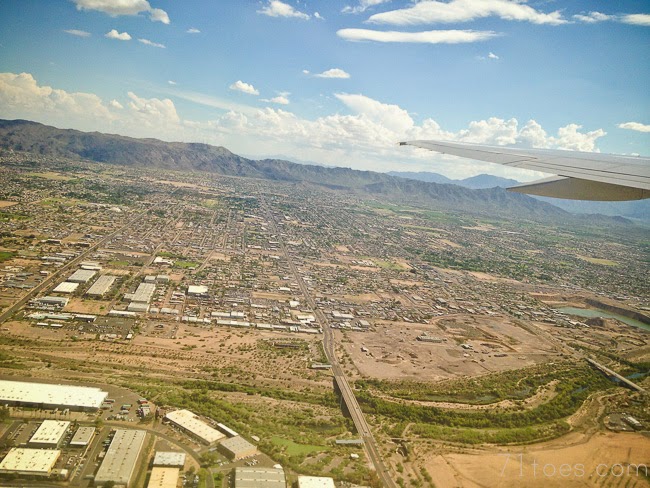 These girls and I were so excited: 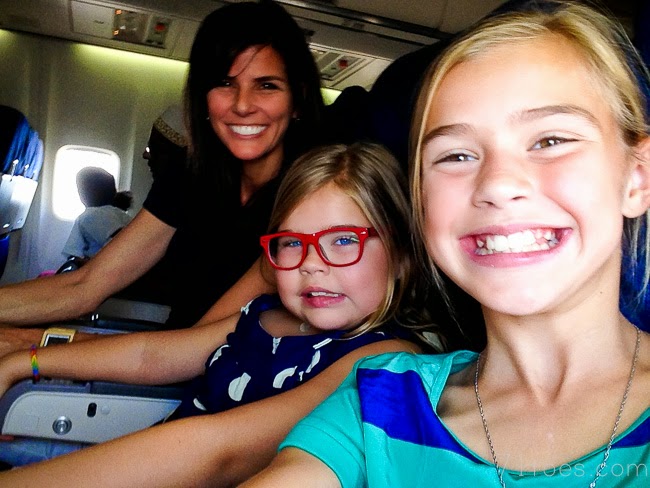 These guys were out the second they hit the seats: 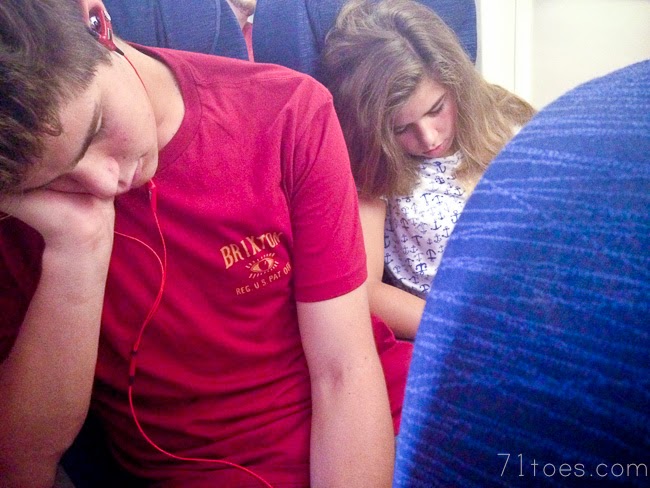 …and this girl had some great reading material to keep her busy (her friends gave her a box of the sweetest notes from a whole slew of them before we left…man we are so grateful for good friends!) 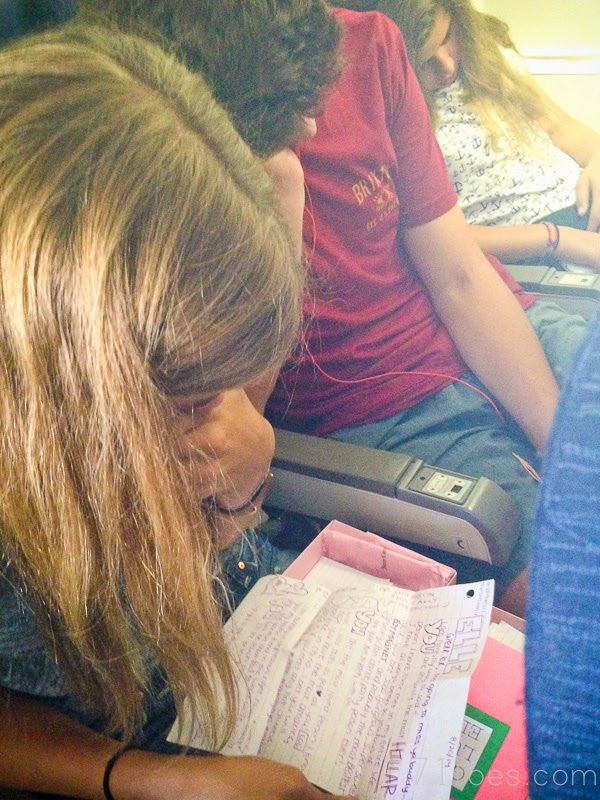 At one point the girls were going hog-wild taking pictures like crazy out of the window at the beautiful clouds.  Made me smile. 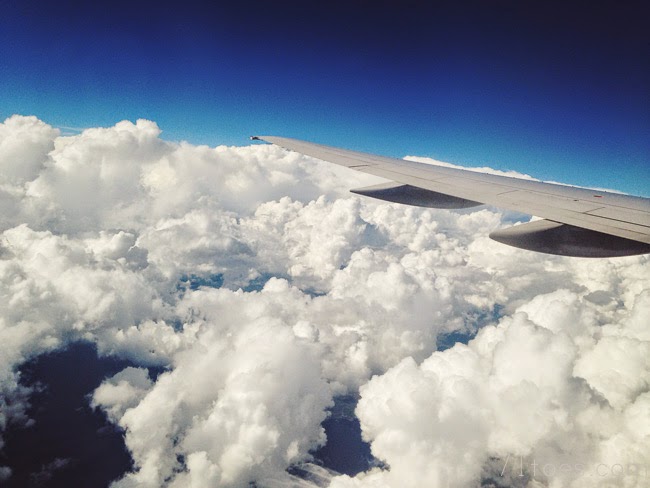 That night we stayed in Chicago: 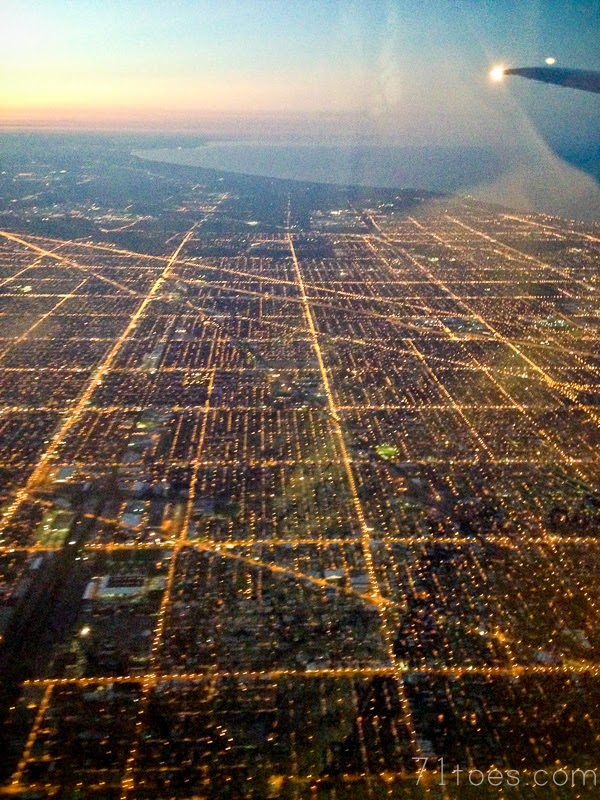 We went to Genos East to have some real Chicago pizza before we fell into bed completely exhausted (there wasn’t much sleep happening the last few days before that!). 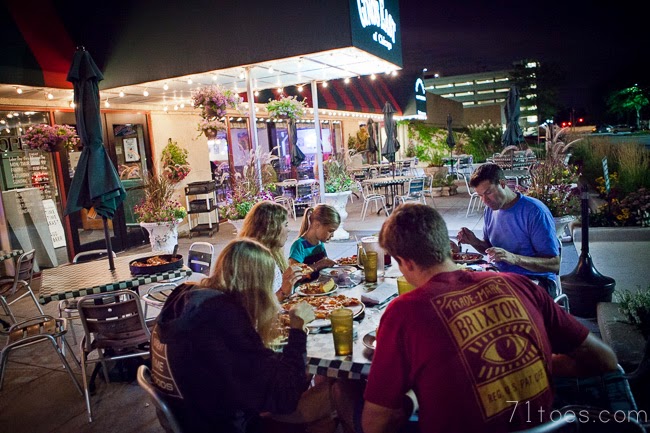 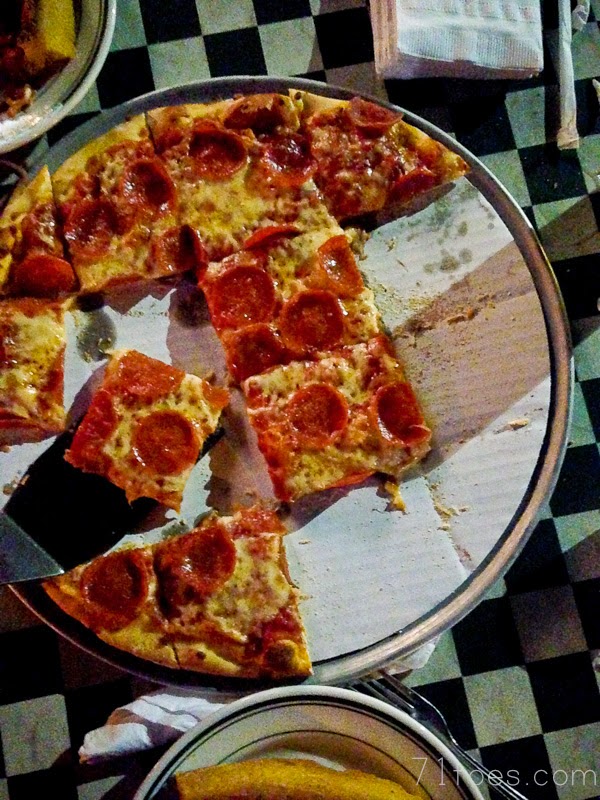 We had a good laugh at the mirror in our hotel room: 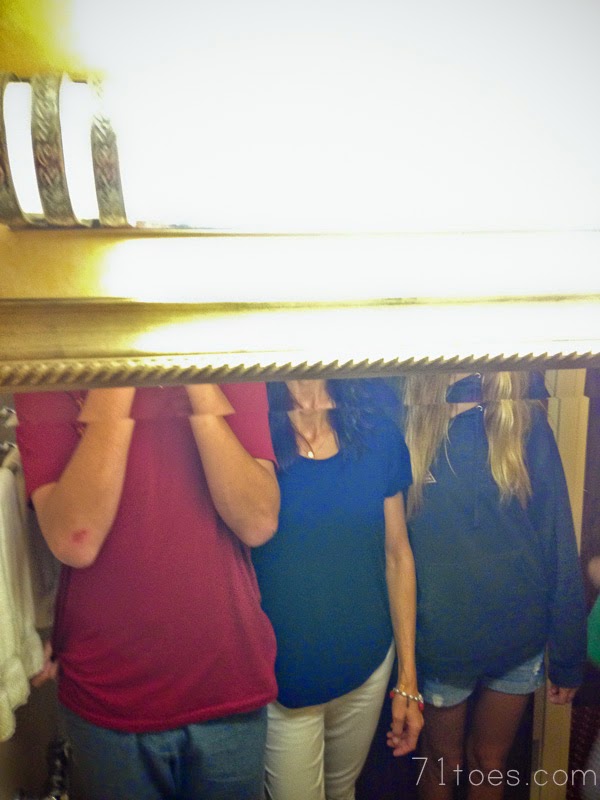 Not really made for people of our stature.

This is one of my favorite views as we traipsed back to the airport in the morning: 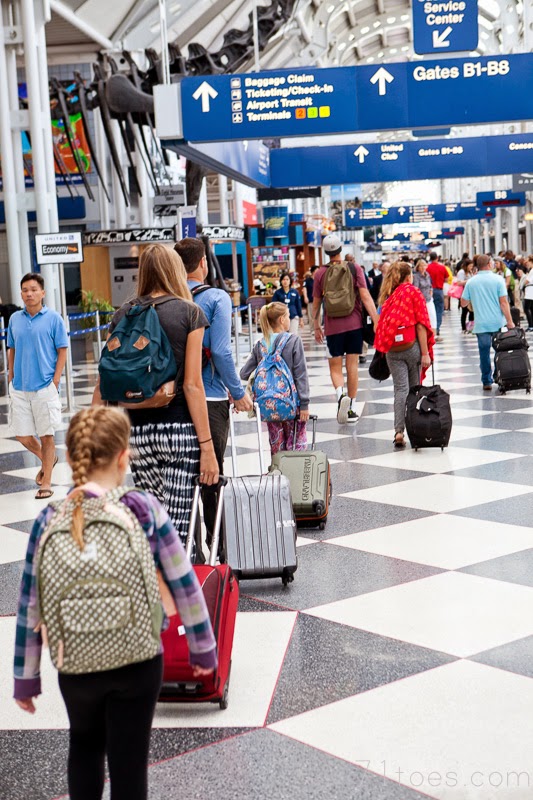 (THANKFULLY without our bags they had agreed to keep overnight and check through to Shanghai.)

Ready to go for reals: 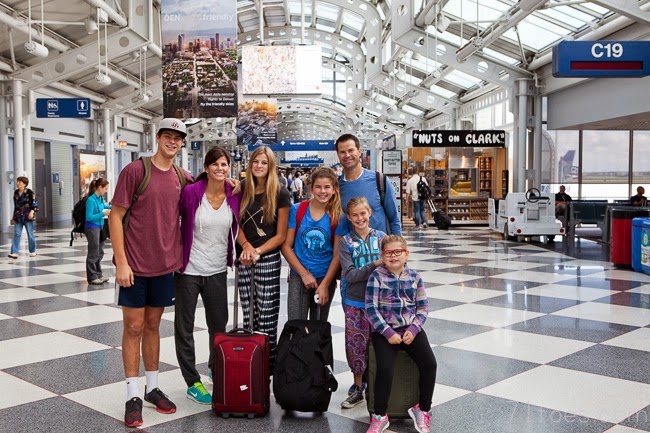 These girls knew which pants would be comfy for that 15-hour flight. 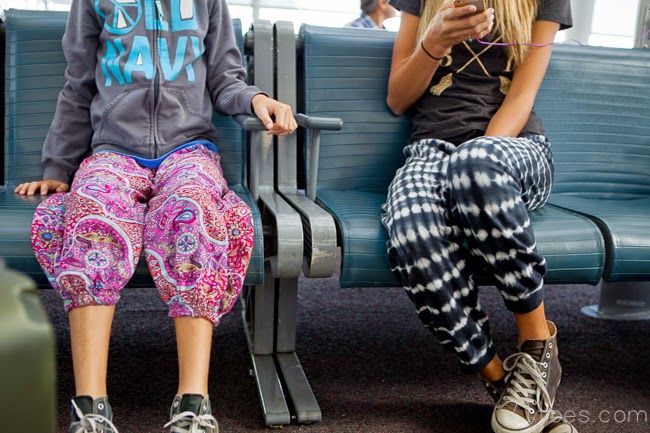 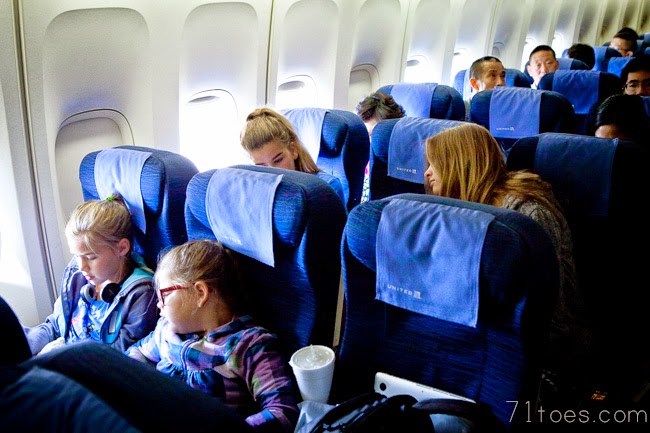 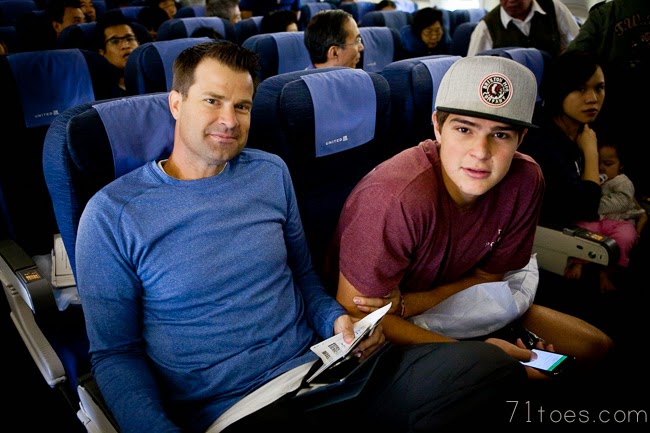 We all waved goodbye to America for a few months. 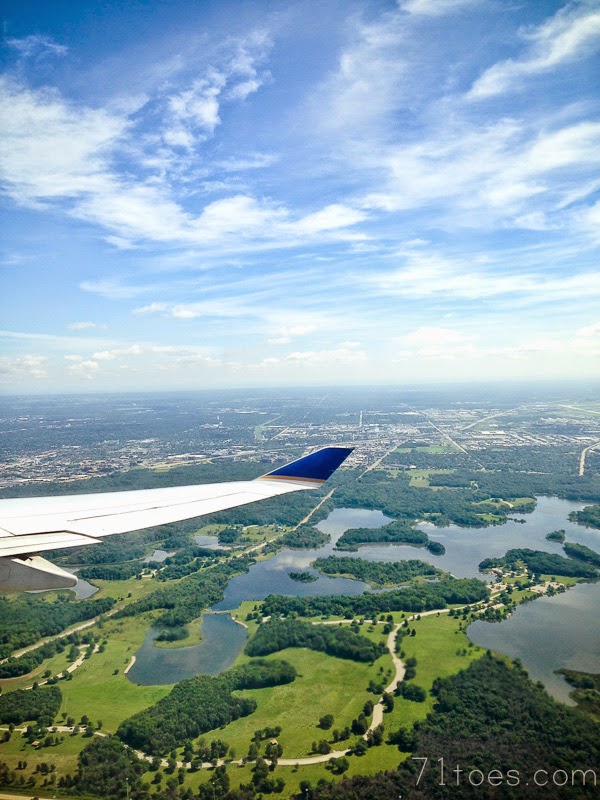 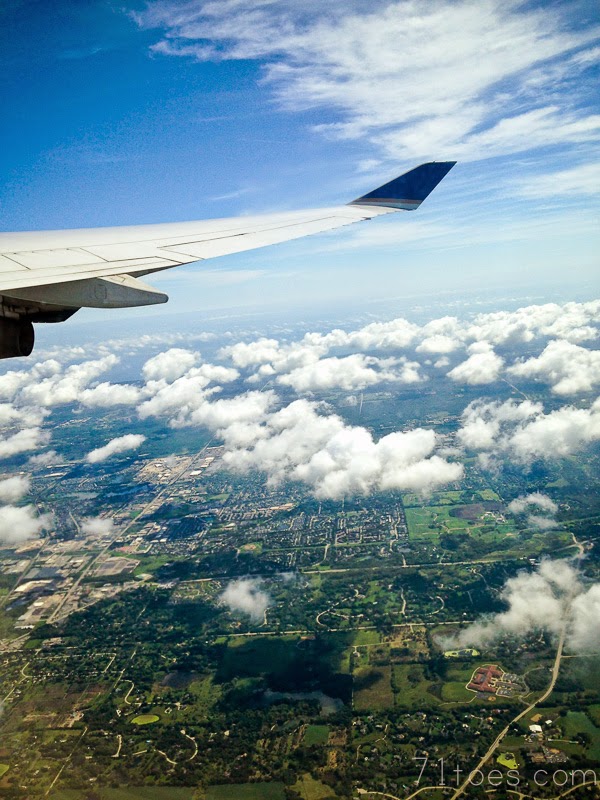 And settled in to let the adventure begin.

Oh and what brand/style are the pants you're wearing before your flight out of Chicago? I cant tell if they are sweats or more like exercise pants, but they look like perfect comfy flying pants!

Interesting that you flew from Chicago and not San Francisco. What a great experience your family.

So excited for you and your family and the adventures that await!! Your family is such an inspiration!!

What an opportunity. I don't know why so many readers were freaking out on you about this decision. It's only for a few months. Not even as long as exchange students are away from home. Kind of the same thing only getting to take your whole family with you to share in the adventure! It's the best of both worlds.
Looking forward to hearing more.
*Be careful on those slippery floors. -Lisa

How fun!!! What an awesome adventure ahead! Thank you for sharing.

Awesome!!!! Way to go guys! China is such a wonderful adventure! Have fun!

So glad you're making the effort to blog and so looking forward to reading about your adventures!

Check WalMart.com if you need American supplies. They ship for free internationally if you hit their minimum purchase requirement. Not sure how Chinese laws effect online shopping/shipping but it was a great way to get peanut butter to Budapest.

Yay!!! I love that you are able to blog from China! It is so exciting to read!

How exciting! Now you've gotten me interested in doing something like this with my family. My husband works for Delta, so the flights are no problem and he can get a temporary work assignment overseas. Hmmm…

What a wonderful adventure! Thanks for sharing with us! I would be so nervous!

Sure makes me smile reading about the first part of your China adventure. Can't wait to hear more as you experience life there. What memories you'll be making!

Love reading about this adventure for your family! Excited to have one with my own family someday when they are a little older!

Not sure if this would be helpful, but one of my squash teammates (I'm in college) is from shanghai. She played squash competitively in high school and went to a foreign language school so I could ask her if she knows of any good tennis or volleyball programs for foreigners.

So jealous but so excited to follow your adventures!

So happy for you! What a great family adventure. I can't wait to follow along. We are dreaming of living over seas with our kids one day.

So excited for you & your family!!! Best of luck with everything!!!

yay! I'm so happy you are still blogging I love hearing about your adventures. So when you go to church and school can you understand anything?

I'm so glad you are able to blog. I LOVE hearing about your travels. Hope you have a fabulous time. Excited to follow along!

This was a beautiful post!!! So excited to hear more about what has happened, and the more events that will happen.
Everytime you blog, I go home to tell my husband all about it: "That family is in China! You know, the family I want us to grow up and be exactly like." Haha!

What an amazing adventure! I admire you guys for doing this. I also wanted to say that I lived in Shanghai about ten years ago and I didn't have too much trouble finding American food products when I wanted them. There were stores that sold American peanut butter, cereal, snacks, etc. I can't remember them anymore, but I'm sure a quick internet search/asking some ex-pat friends will help. I hope you guys also take advantage of all the different cuisines and yummy local foods there too!

amazing opportunity of a lifetime!! i too believe in the struggle that comes with change and experiencing it all together as a family. i can't wait to read all about your experiences!!

wowzers, how exciting!!! My goal is to live abroad in the next 5 years before my oldest graduations high school. If only for 5 months, I'd take it! Sadly,my husband thinks I've got my head in the clouds!! Excited to follow your adventure!

I had tears, this is my dream. My husband works there so now to move us there not just me visit him when he goes.

Oh man! If I'd known you were stopping in Chicago I would've recommended Giordano's. They have THE best Chicago style deep dish in Chi-town.

So glad you made it safely! I am thrilled for the adventures you're going to have and the things you will learn that you never could have any other way.

katiefromtheblock, I'd love any info. you could send.

Oh and thanks everyone for all the encouragement!

I'm so excited for your cute family!!! Thanks for taking us all with you. Best gift you could give those of us with a travel bug! Thank you 🙂 🙂 🙂