October 31, 2014
I think Claire’s biggest worry about coming to China was missing Halloween.  I mean, what ten-year-old wants to miss a day like that?  Thank goodness that the good old “Trunk-or-Treat” tradition is alive and well in our branch (church) here in Shangahi.
These two little girls were in hog-heaven about that fact.  Fortunately for them, we have some friends with some great outfits they borrowed for the big occasion. 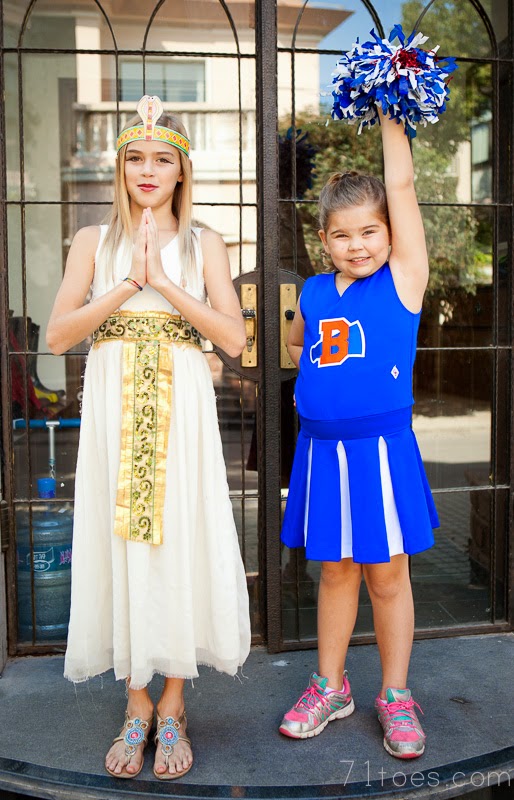 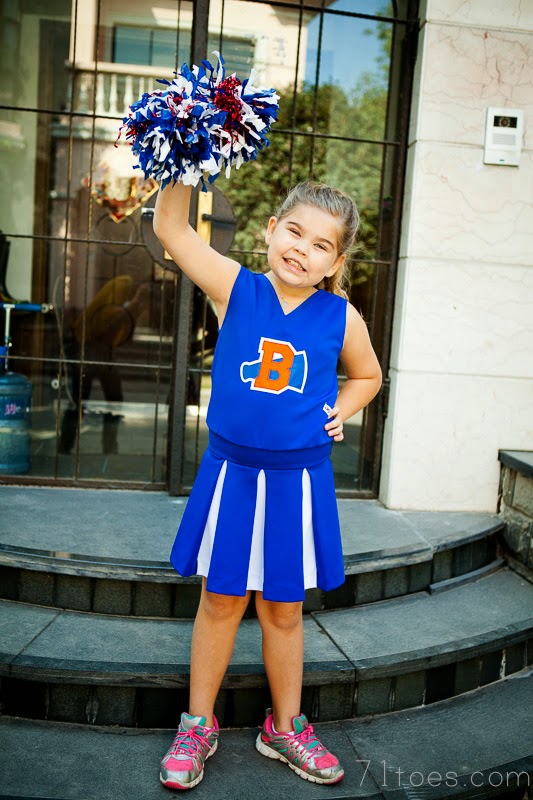 Luckily I happened to be at the big whiz-bang private school the day before helping with the international fair (which was amazing BTW…crafts and food from all over the world), and I was able to snag a little Egyptian headdress from the Egyptian craft station for Claire to color to go with her outfit (she’s some sort of Egyptian queen). 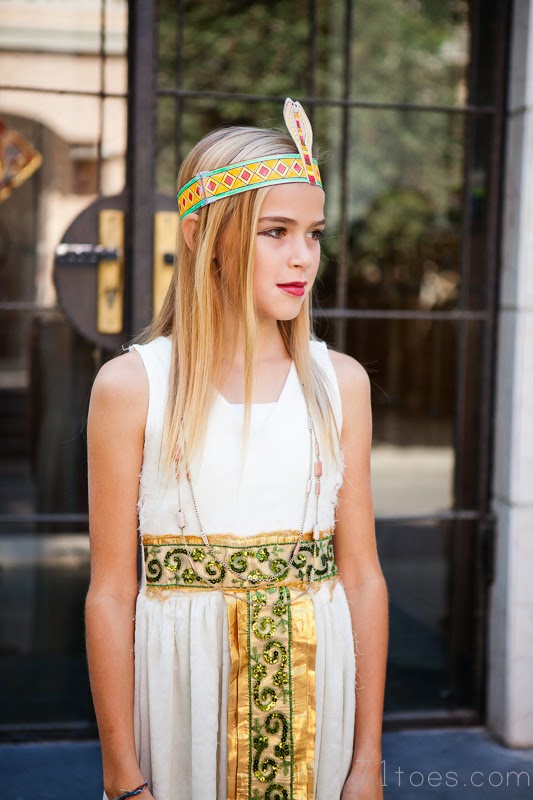 At first she was a little hesitant to wear paper on her head for a queen, but hey, beggars can’t be choosers and it she colored it so well that it turned out perfectly. 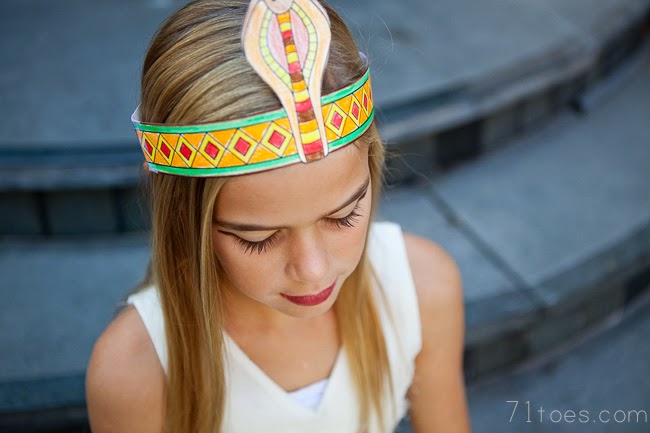 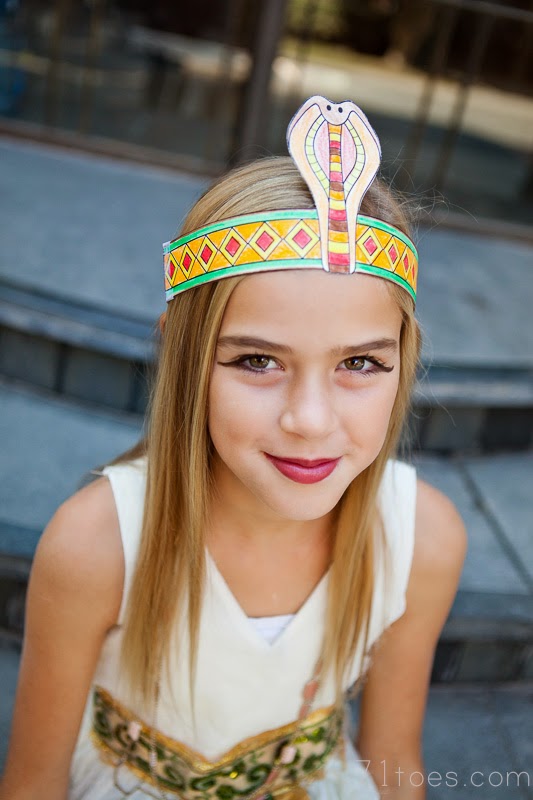 She was most excited about the make-up. 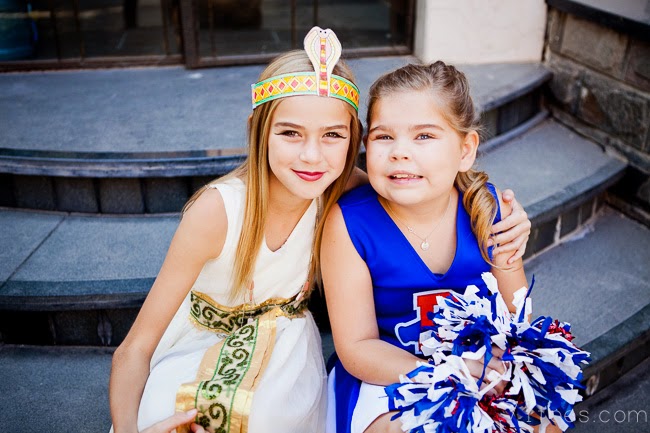 By the time Grace came out to the car, we were all in there waiting for that girl, and then we scattered once we got to the park so I never got a pic. of them all together.  Darn it all!   But here’s our “explorer.” 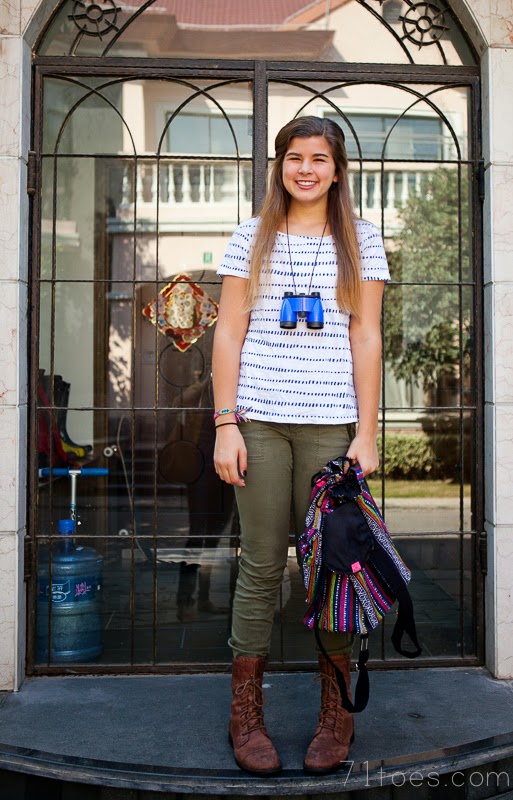 Grace is past the caring-too-much stage for Halloween but we brought her friend along who was dressing up too (and who I also didn’t get a picture of…double dang!) and she wanted to come up with some kind of idea.

When we got to the park my friend brought over the extra part of Claire’s outfit: 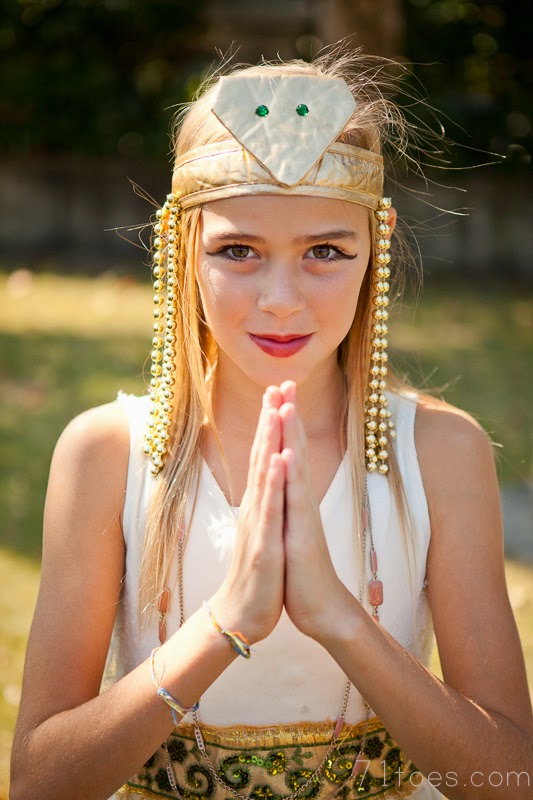 …didn’t realize there was a head-dress too, man alive we hit the jackpot!!  (although I was a little sad to see the paper crown go 🙂 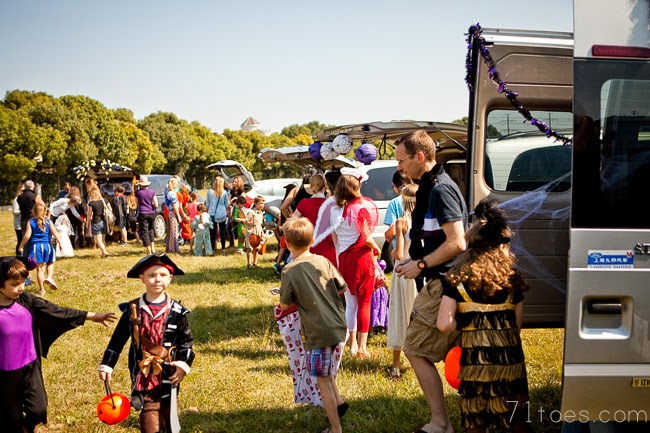 Trunk-or-treats always make for a good time I tell you.  I mean, what’s not to love about going around collecting candy? 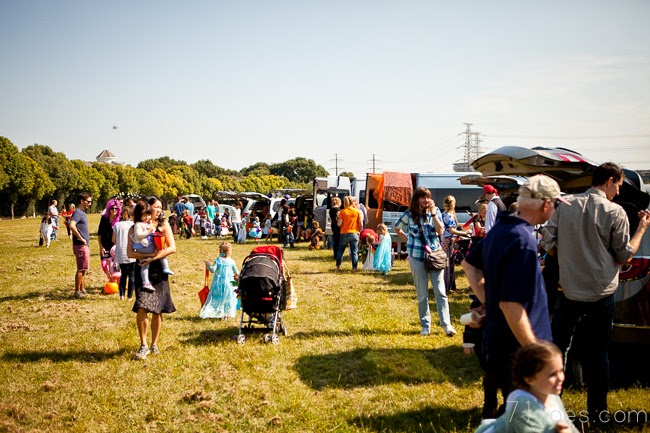 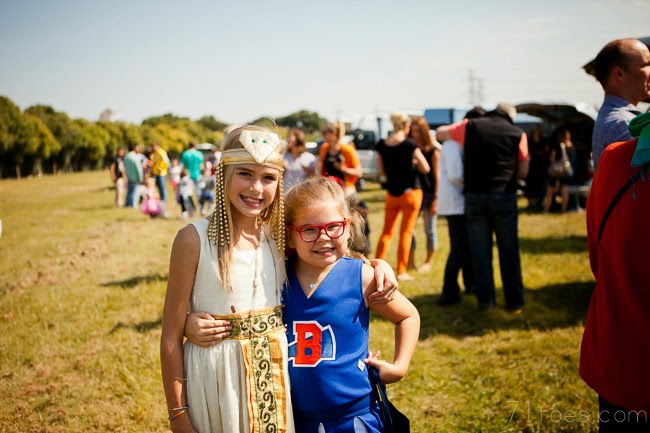 Where, you may ask, were Max and Elle?
Well, they were at the most fun place you can imagine on a Halloween Trunk-or-Treat morning.
They were taking the ACT test.
Max was taking it for his last time, Elle for her first. 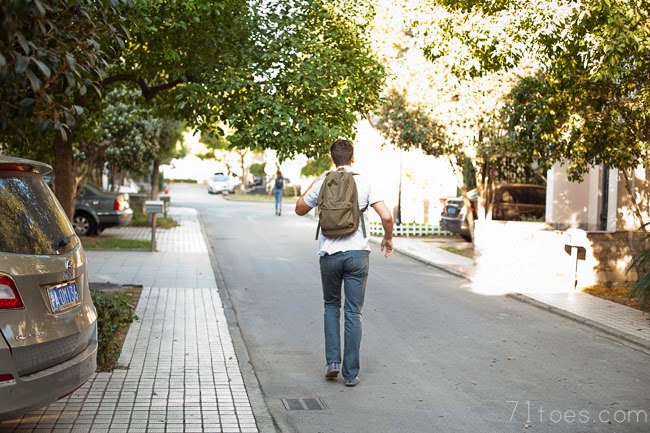 One of my favorite parts of the week was listening them sit at the computer together talking through practice tests.  It made me wonder what Elle will do without Max next year.  Then it made me wonder what ANY of us will do.  And then it made me want to crawl into the corner and cry so I decided to think about something else.
Which wasn’t very easy.
As those two walked out the door that morning I had a million things I wanted to say.  “Focus,” “remember what you’ve studied!,” “a lot is riding on this! (Max),” but instead I bit my lip, gave them hugs and told them they would do great.
How great we won’t know for a while, but all I know is that Max was talking about how his brains was hurting when it was through.
We are not the most amazingly talented test-takers in our family, dang it!
In other Halloween news, we lucked out and got to take some tiny pumpkins home from the Trunk-or-Treat, which we carved up in the midst of a little bit of chaos last night.  It was one of those nights where not everyone could be happy at the same time.  Everyone had to take a turn to get a little sensitive.  Oh boy.

I reminisced how I carved an apple just to be creative one Halloween growing up.  I guess that’s a tradition since the kids reminded me I tell that every year.  Claire did her own little apple carving… 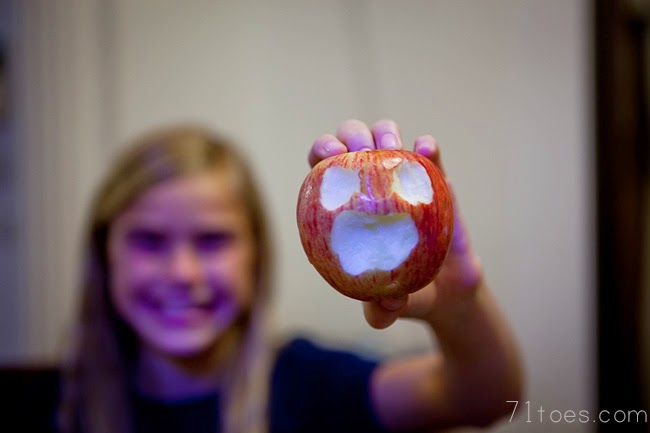 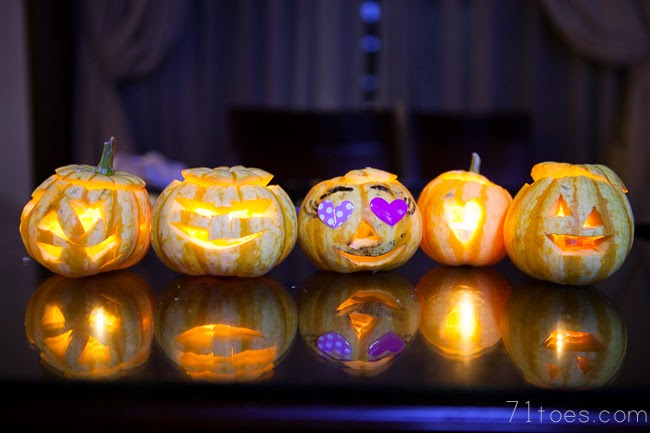 It was definitely far from our usual carving hoopla, but then again, so is everything here. 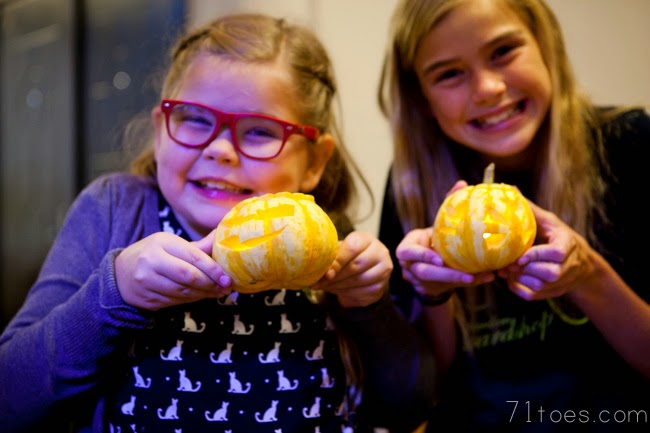 Today for Halloween in second grade at school, instead of having a Halloween parade like they do in the states, they had a “crazy hat” parade.  Everyone had to make their own, as creative as they could.  Lu and I came up with this one. 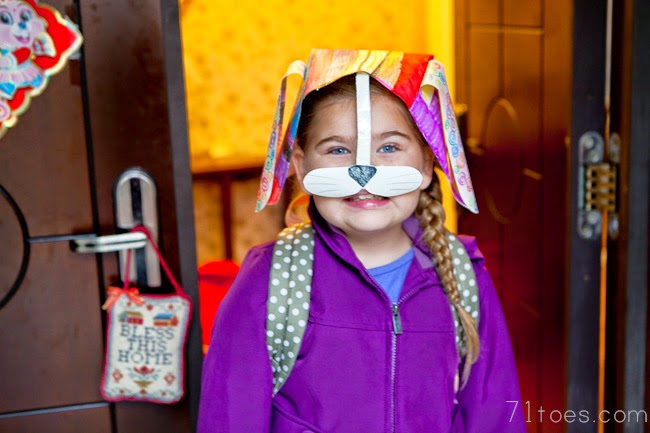 I wish I had better pictures of the side view and back…it made us all crack up.
I couldn’t believe the creativity the oozed out of the parade at school.  Wow, these kids were decked. 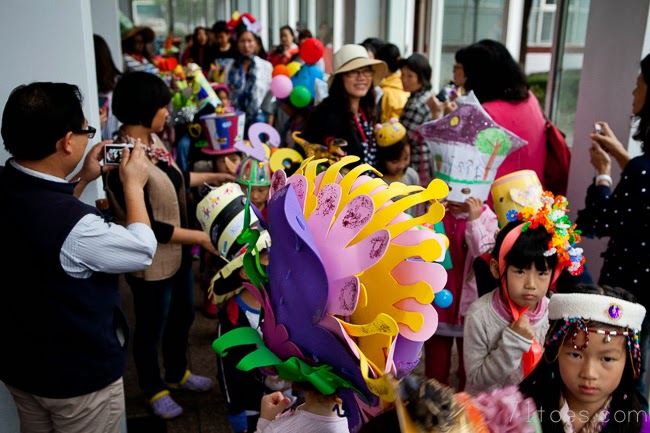 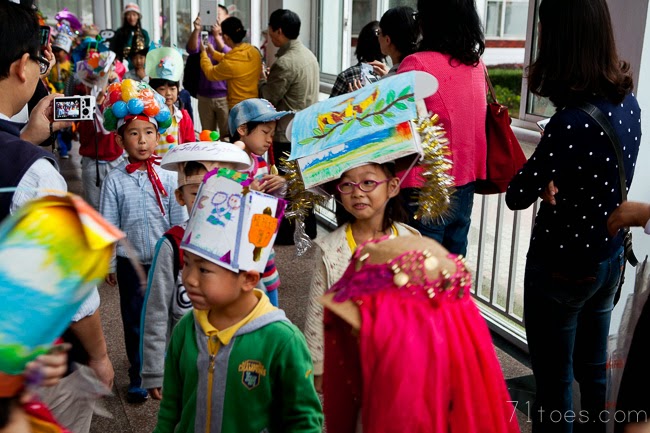 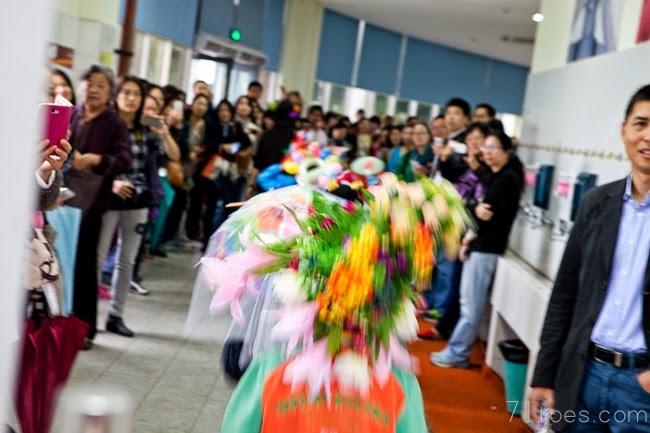 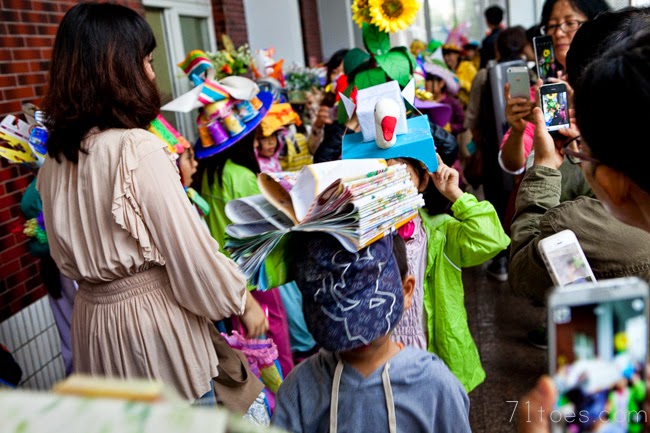 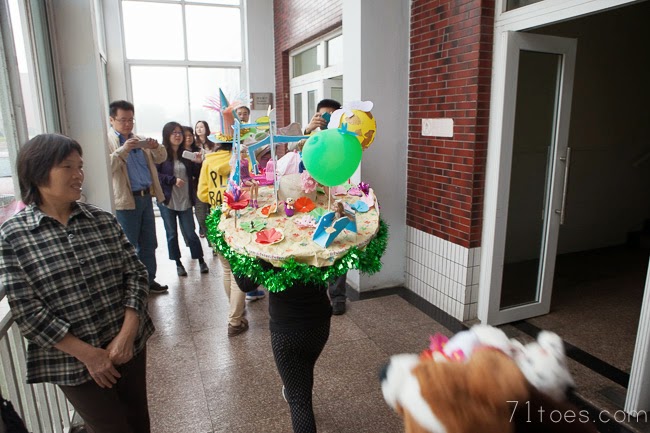 That was a whole Barbie land up there above. 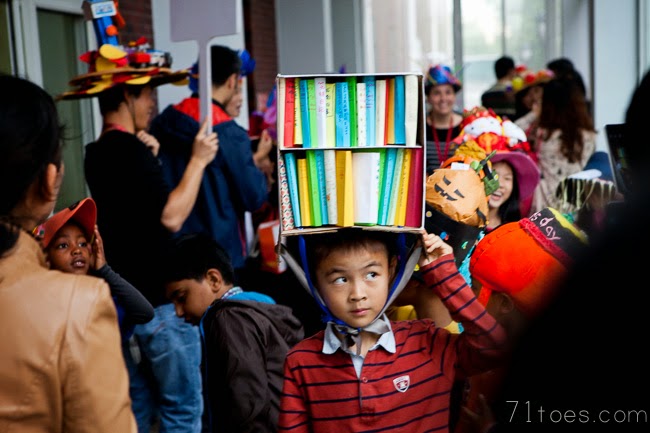 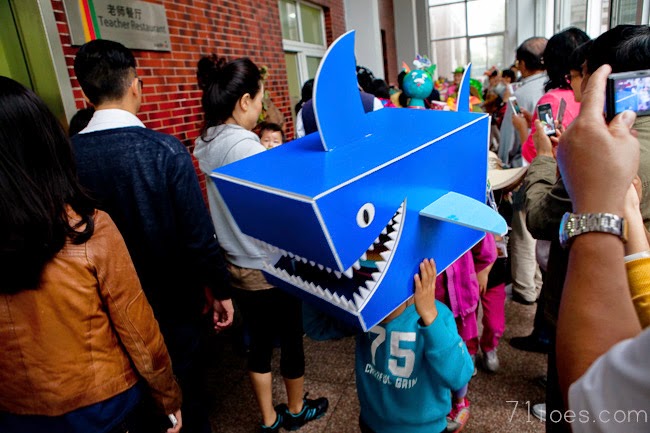 And then there was my little rainbow dog. 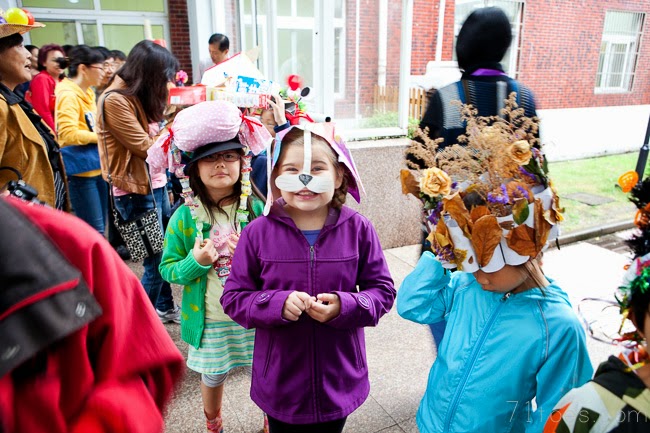 Tonight, for real Halloween, we will be on a high speed train heading up to Beijing, me and the kids.  Dave will meet us there en route home from a business trip he’s been on this week.  And we are all so excited.
I promised my girls who are so sad to be missing the real trick-or-treating deal that they could trick-or-treat around to the group of us on the train…how fun will that be?  Ha!  I’m off to figure out some good “treats” to stick in their pockets.
4 comments
0
FacebookTwitterPinterestEmail

halloween amidst flying to and from sunsets

some thoughts and Halloween 2019

pumpkin carving FHE and a sneak peek to...

Jack-o-Lanterns 2013 and some Halloween thoughts

I'm glad your family has gotten to do some Halloween activities! I'm very familiar with the ACT taking…my youngest, a senior, took it for the last time in September. Her older sister (by 15 months) is in her first year of college and the girls certainly miss each other. Technology makes it easier to keep in touch! Feel free to email me with any questions on college apps, testing, etc. We've been through it once and are knee-deep in it again this fall.

Love seeing this since we can't be there. I can't believe it's been a whole year since I was walking around your old neighborhood with you and Lucy. Time flies! Such cute pics. Love those little girls' enthusiasm for Halloween…and life!

I have been reading your blog for years, though I don't think I've ever commented. But, I saw you and your cute family in church today (I was leading the singing so I had a great view of the congregation) and I almost ran over to say hi before I remembered I don't actually know you! 🙂 So, I thought I'd at least say hi in the blogosphere. I hope your visit to Beijing was fun and that you were able to take advantage of today's incredible weather.

Hi, I read your blog all the time but I don't think I have ever commented. I have a junior in high school, help what do you do to help your kids to prepare for ACT and SAT's. Did you buy books, do a online course, go to a class. I am not sure where to start my junior is my oldest so I need some help on where to start =)