Home TBT — growing into my expectations

TBT — growing into my expectations

April 30, 2015
I have been feeling particularly reminiscent lately as we prepare for Max’s graduation.  Since I am putting most of my blog ideas on the back burner so I can really “be there” with these kids right here and right now and enjoy this snippet of time that is fading away so fast, I figured a “TBT” (Throw Back Thursday) for a little while might be fun.  Here’s the second in that series.
A year-and-a-half ago I purchased a new camera.

I felt like I had sufficiently outgrown the one I had and I was ready to take the leap to the beautiful “full frame” camera I had deliberated endlessly over and saved up for.

With my purchase came some high expectations.

I envisioned the images that new thing would produce: they would be breathtaking, just like the ones I saw on the Internet.

When the new camera finally arrived I pulled it out with baited breath. It was a beauty (even though it didn’t come with one of those beautiful gold Nikon boxes I love 🙂 I immediately started shooting with confidence.

You see, in my mind, there was no effort involved on my part in making the camera switch. I was quite confident that the new technology would magically shift me over into the realm of out-of-this-world photography.

To my surprise, the first pictures I downloaded weren’t anything fancy. My second batch wasn’t so hot either…nor was my thirteenth.

I gradually realized that I was going to have to really work with this thing.

But of course, since I love photography so much I was willing to put in the hours it took to get on the right path. I’m still climbing that learning curve every time I take it out. I ask other photographers questions, I sometimes watch tutorials, I even venture to pull out the instruction manual from time to time (I have an instruction-manual-phobia because they are so overwhelming to me).

But again, for the love of my hobby I’m up for the challenge. I learn new things all the time and build on the base I have. The learning curve doesn’t go away. There is always something new to reach for and it’s ok that it’s hard and overwhelming at times, because I love it.

I thought about this little scenario a bunch this week as another example of “growing into my expectations” came up.

I needed to leave Bear Lake (where we have been for a couple weeks) to go pick up Max and Elle from some camps they attended at BYU. (MUCH more on that later.)

I decided to bring all three of my younger girls along for the 4-hour drive (each way) despite the offers from family that they would take care of them here because 1) I kinda missed them. I don’t get to hang with them as much as I want up here because they are so occupied with their great cousins…which I’m thankful for but I DO miss my kids sometimes, and 2) quite simply put, I pridefully wanted to prove Dave wrong that Lucy can’t do road trips. (She and I have been flying to any family trips the last couple years because she has been awful on the road in the past. She has a free companion pass with me on Southwest and it saves Dave’s sanity not to have her in the car. As much as I love to fly and get places quick I miss family road trips. Dave and I have been in the midst of an ongoing disagreement as to whether she is ready for them again.)

As we pulled out from the lake I felt empowered…kinda like I did when that new camera box came in the mail. I could do this. It would be a cinch. And it was…for a little while. Lu was an angel.

We stopped to take in the scenery: 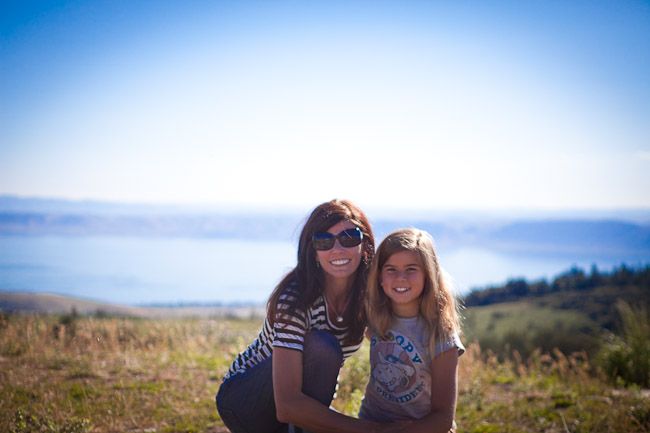 I told the girls all my best Bear Lake memories to which they listened in rapture.

We visited my aging Grandmother (who wouldn’t let me take a picture of her but here’s her house): 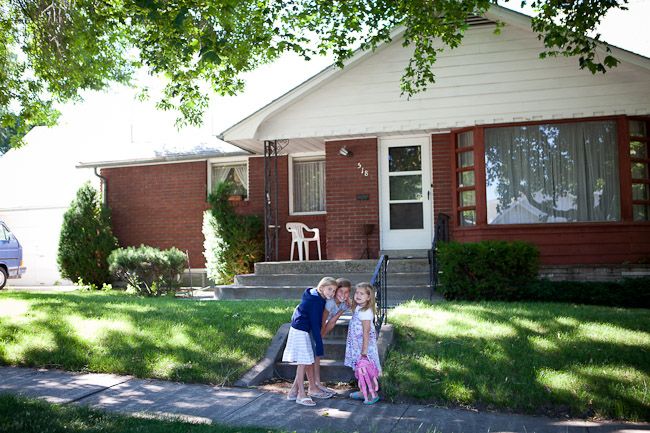 We picked up a cousin along the way.

We had some really nice discussions and played our car “question game.”

But gradually it started to emerge: Lucy’s skillful whine.

That whine shifted into a wail.

Which shifted gradually into the fingernails-on-a-chalkboard-reminiscent screech.

With each new dynamic that feisty girl added I realized I wasn’t proving Dave wrong at all. Instead I was proving him precisely right. Lucy wasn’t ready.

I wasn’t giving up though. We got Elle and headed to the BYU library: 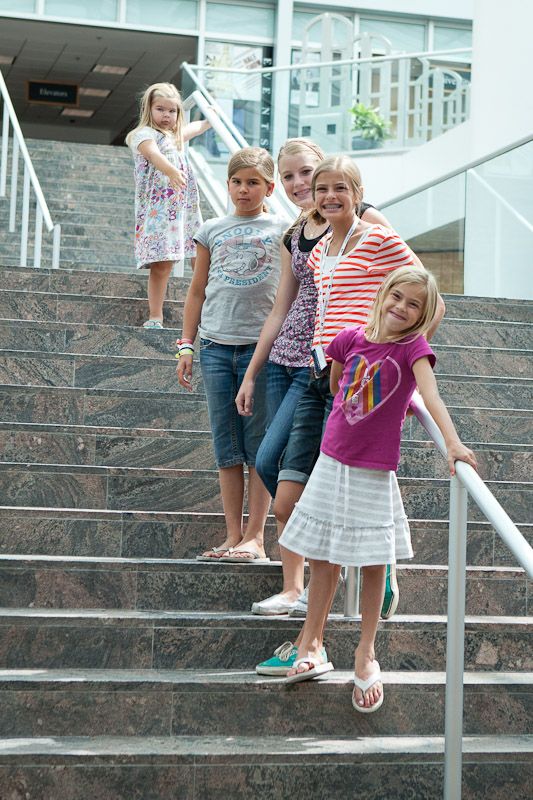 And then to the art museum.

I LOVE art (more about that here) and I’m always on the lookout for ways to help that love seep into my children. I envisioned us all examining the art quietly and respectfully. My expectations were that the girls would nod in accord as I explained why I liked this or that. They would have smiles stretched across their faces as they soaked in something their mother loved.

Instead, Lucy lagged behind us as we walked across campus. She threw a full-fledged fit in a breezeway where we were all forced to take a long, frustrating break while she wailed it out.

Instead of my vision of respectful reverence for the beauty of art we had this: 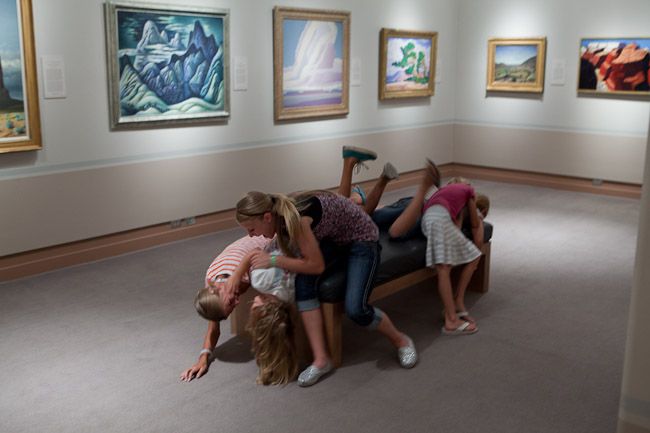 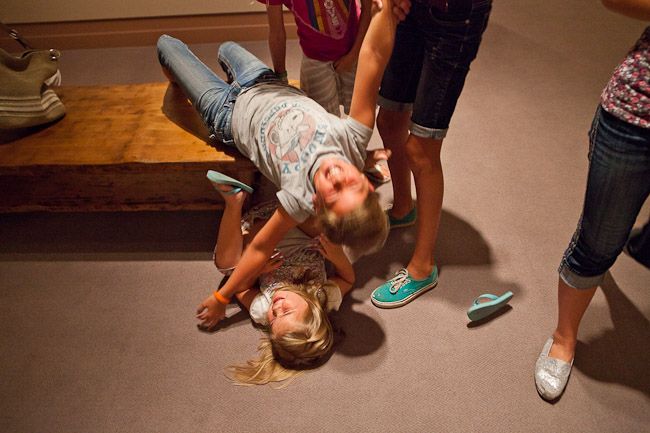 (Too bad I only thought to take out my camera when their boredom morphed into slap-stick laughing…I could have had some great shots of them sitting on those benches looking bored to tears.)

I was frustrated. For a little bit I wanted to kick myself for having had such high expectations.

But as the uncontrollable giggling came out I realized something:

My expectations were far from too grand…they were wonderful. High expectations are the only way to arrive at that place we yearn to be some day in life.

But I realized that in my mind, just like when I got my new camera, I had thought there would be no effort in our little road trip.

But in reality the best things in life come after working hard on them. Not that we haven’t worked our little hearts out with Lucy for the last few years, but just like I’m always figuring out new photography tidbits along the way, even more so as a mother I have to continually strive to re-evaluate how we are doing things. I have to have my mind open to new tactics along the way. Poor Lucy is so off schedule. We’ve been in and out of town all summer. She’s four. And she’s naturally as stubborn as an ox (which I’m convinced that although it proves to be incredibly frustrating at times, it is going to help her so much in life). In all reality she had every right to be grumpy.

Sometimes I have to remind myself of my favorite saying my wise mother says: “Life is Long.”

Some day we will take road trips again as a family.

Some day down the road, if I work at it and take baby steps I will probably be standing in some art museum with all my children ooooo’ing and ahhhhhhh’ing about the majesty of how artists portray what they do.

Some day I’m sure a lot of my grand expectations will come to fruition.

Some of them I will most probably realize weren’t really the right expectations in the first place.

It may take years or decades to reach the worthy-to-reach-for ones. And the majority of them most certainly won’t come without work.

But if I continually, prayerfully re-make and realign how I deal with things as a mother, they will come.

And the reward will be that much sweeter.

On the way home the girls and I came up with some new ways to deal with Lucy. We implemented some creative rewards. We slowed down. Although our efforts didn’t miraculously work wonders, we took some steps.

I changed, not her.

It’s all about sticking with it and enjoying the journey along the way. 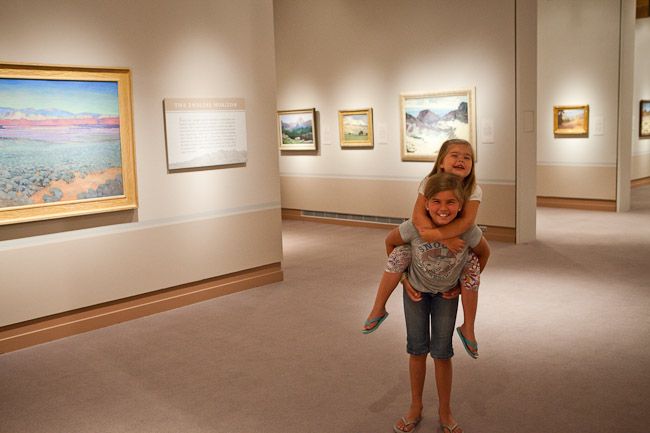 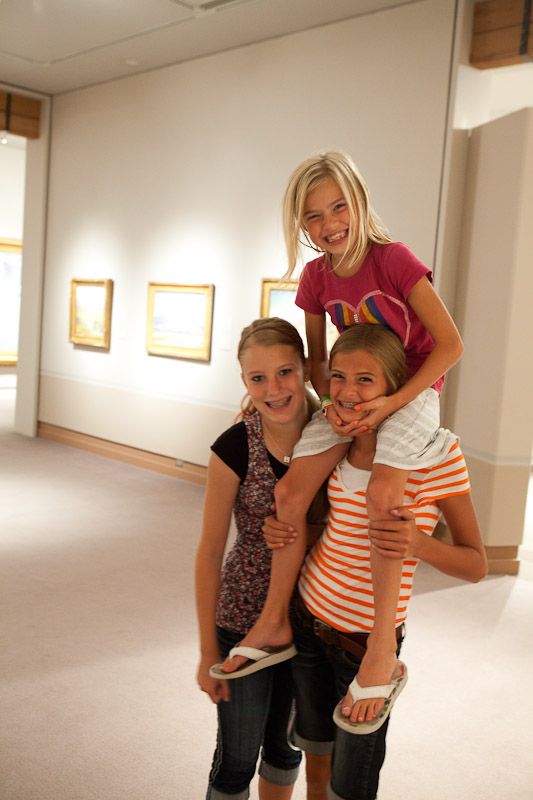 Even if “the way” happens to have a whole bunch of work involved. 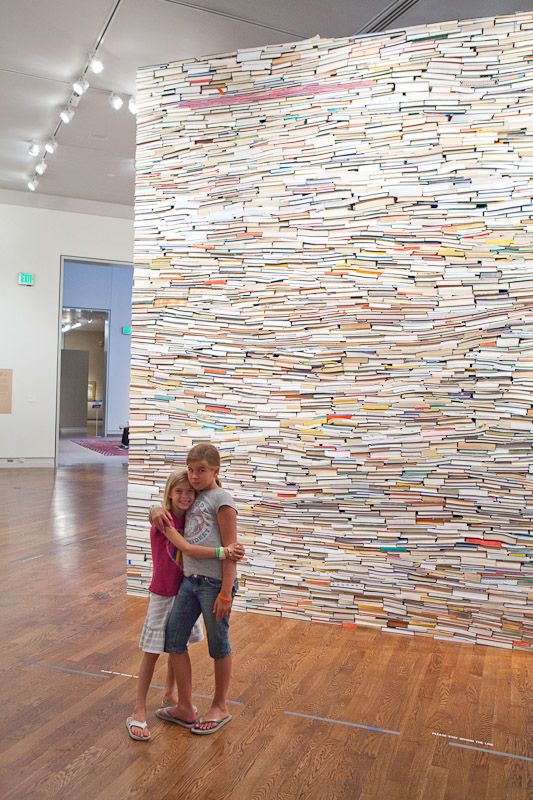 I’m sure grateful to have these kids along for the ride.

Along with my husband who really is {almost} always right.

I should know better than to try to prove him wrong 🙂

Thanks for sharing!I always seem to have higher expectations than what is often realistic. This was a great reminder of how to handle those situations.

this was wonderful!!! thank you. 🙂

I have been following your blog for a few years now. I always enjoy your posts and love to hear your perspective on life situations. Thank you! I have a random question… My daughters play competitive volleyball and I have tried all season to get good action shots of them. Sadly, I have failed miserably… Totally blurry every time. I'm wondering if you can give any tips on what to set my camera to? It's a Cannon Rebel XSI.