October 22, 2015
Did you know that October is Blindness Awareness Month?
Well, it is, and since we’re kind of in the community to be pretty aware of blindness, any hoopla to help find cures makes me pretty excited.  It’s also Lucy’s birthday month so that all ties in pretty well if I do say so myself!
It’s also perfect timing since we’re gearing up for our fifth annual Turkey Trot on Thanksgiving.  Oh boy, it’s a lot of work, but it’s so nice to be here close-by to help rather than trying to help from China like we were last year!
Anyway, lots more about that soon, but in preparation we want to give a shout-out to our friends at Lemon Tee Shop who are running a campaign this month to help in the fight.  They are donating 100% of the proceeds from the purchase of each “cool glasses” t-shirt they sell directly to The Foundation for Blind Children (which is a pretty cool organization where Lucy had music therapy when she was a toddler…they do a ton to help kids with vision problems and organizations like that kind of make me tear up a little when I think about what a difference they can make…sorry for that queen of run-on-sentences…).
They were prompted to do this because of a sweet little girl named Ruby Valentine who has had multiple surgeries to help her keep her vision.

More about that sweetie over HERE.
We are proud supporters of anything that helps kids keep their vision so our own glasses-wearers are happy to help promote awareness right along with little Ruby. 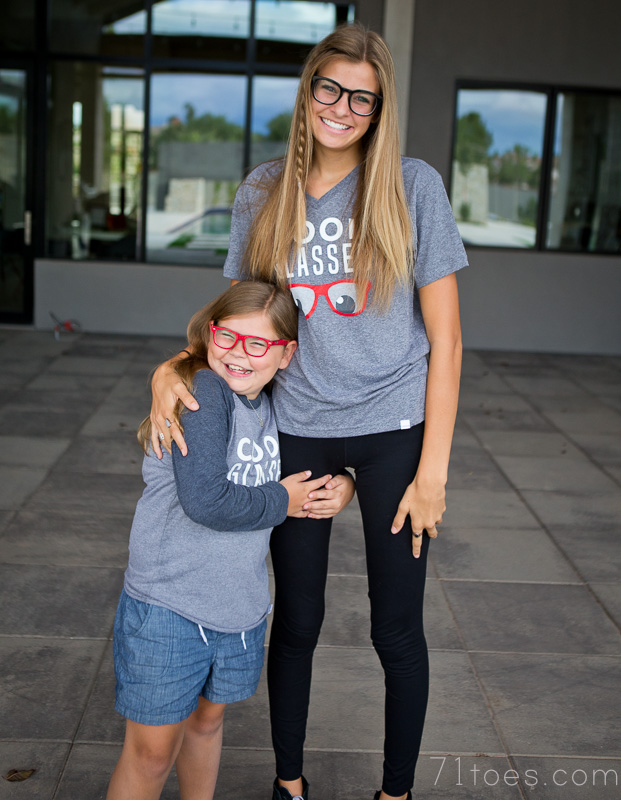 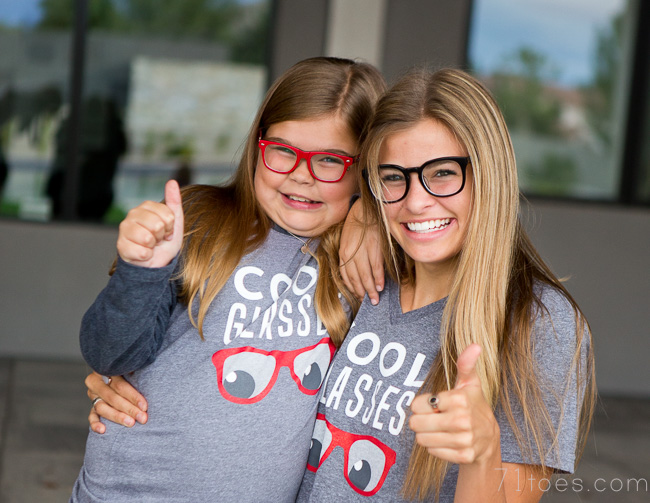 Pretty cute shirts, right?  I especially like the baseball tee.  The promotion ends at the end of October so if you want one, hustle on over to their site (here) to get your own.

And in preparation for our own campaign coming up next month I have to tell a little tidbit about Lucy’s signature red glasses.  (Because we’re kind of focusing part of it around them).

She loves those things.  But a while ago someone stepped on them and one of the “arms” broke off.

So she has been wearing her pink ones and longing for her red ones.

Finally Dave was able to track some new ones down for her for her birthday and she was in heaven about that.

So fast-forward to last week at Lake Powell.

It was late when we arrived at the marina.

And there was no moon.  It was velvety dark.
They have little trolly things that can help you bring your food and bedding and everything else (including your people:) from the parking lot to the marina.  And when you get there, you unload all your stuff and load it onto the side of the houseboat.  There is about a five-foot gap in front of the houseboats…apparently they can’t quite get up to the very front of the slip.
When we were coming around the bend and I surveyed the situation, I figured I better explain how it worked to Lucy (who was sitting next to the driver in front of me) and help her maneuver that situation.  The lights were on in the houseboat and if you have normal eyes you wouldn’t think twice about the set-up.

But Lucy doesn’t have normal eyes.  She can’t see at all even when it’s just a little dim outside.

The motor was loud and I figured we had a few minutes before we pulled up so I waited…but I waited too long because the moment that motor was off, in her excitement she jumped out of that little trolley and splashed right into that deep dark water with all her clothes on.  And her red glasses too.

As you can imagine, we were all kind of freaking out.  She is a good swimmer and popped right up, and was pulled right out within seconds by our trusty driver.  But man alive that got all our hearts pumping.  What if she had hit her head on the way in?  What if she had slipped under the marina?  What if, what if, what if…all those horrifying things that go through a mother’s mind.

But thank Heavens that girl was just fine.  (We said prayer after prayer of thanks for the next hour that she was ok.)  But she was shaken up a bit and was bawling and cold and soaked through all her layers (it was a little chilly that night).

But her biggest worries?

1) That her new stuffed lion (Leo) she got at the BYU bookstore (who was soaked but clutched tight under her arm) would never get fluffy again.

and 2) that her new red glasses were gone.  Lost forever in the depths of that deep dark water.

We told her over and over again that all that mattered was that she was ok, but I think she was a little on the over-tired side along with the freaked-out side.

We got her all situated and dried, Claire found her lost flipflop the next morning and Leo the Lion even dried out perfectly fluffy (and has since been lost at school…but that’s a story for another day!)  On the way home I was filming Lucy telling about Lake Powell and she was laughing her head off about falling in the water so I think any emotional scars are healed.


But alas, those glasses are gone forever. 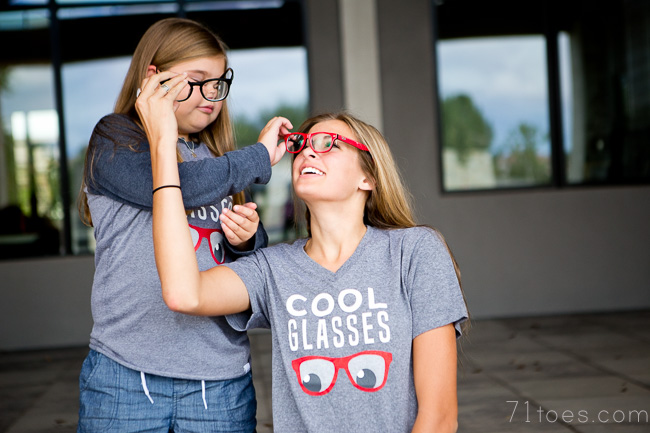 They don’t actually stay on her face very well, but hopefully they’ll make it through until we can find some new ones. 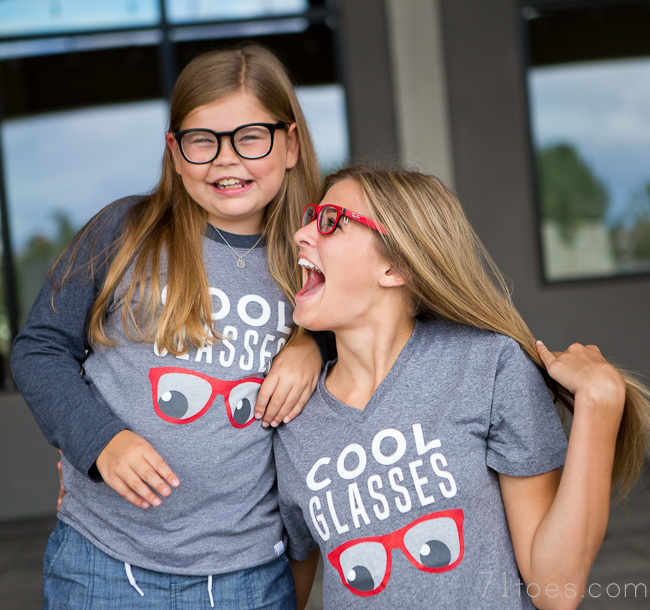 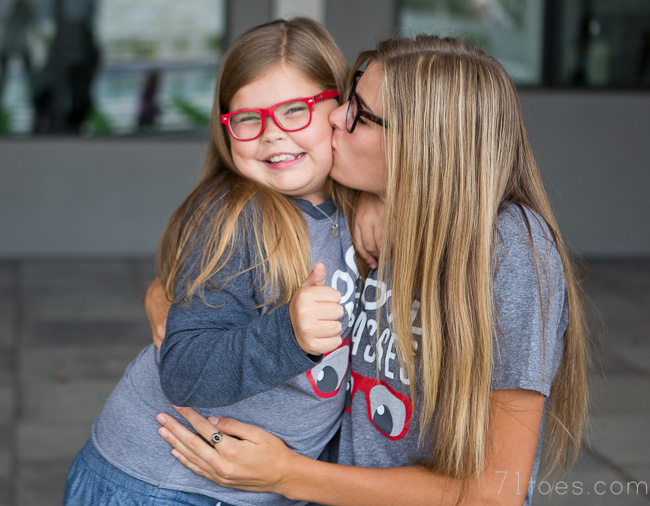 Bottom line on that somewhat-unrelated-story-that-I-just-want-to-remember is that glasses are awesome.

And people who fight blindness are pretty awesome too.

Thanks Lemon Tee Shop and everyone else who helps fight to save vision.

Falling in the dark lake would have freaked me out too! That really sucks she lost her new red glasses 🙁 I'm positive she'll have another new pair here soon.

Oh Shawni, that story makes my heart hurt for multiple reasons. I'm so glad that she was ok and only her red glasses were lost.

I have pictures in the hospital with my first baby and my glasses are held together with a safety pin. I hear all the kids do it (if not just to confuse the nurses!)

So glad she was ok, falling in the water at night scary for anyone! Bless her heart. Looks like a fun trip!

I'm so glad that Lucy was OK. That must've been so scary for her & everybody who was there.

I'm really glad they found Leo too & that he also recovered

I love the pix of Lucy & Elle very precious.<3

Target! Target has those frames (at least they do in CA) and they have an awesome warranty.

So very thankful everything worked out with Lucy's fall. She's such a brave girl.

You might try these red glasses from Zenni Optical, they're only $12.95 so you might even choose to pick up a spare pair.

I second the zenni optical website. Frames start as low as $6.95. All you need is a current prescription. She can find pretty much whatever her little heart desires – red, red with polka dot, etc. Definitely best bang for your buck…and you don't feel guilty if they get lost or broken. 🙂