Home books Things I want to remember about reading “The Magician’s Nephew” with Lucy:
booksthoughts

Things I want to remember about reading “The Magician’s Nephew” with Lucy: 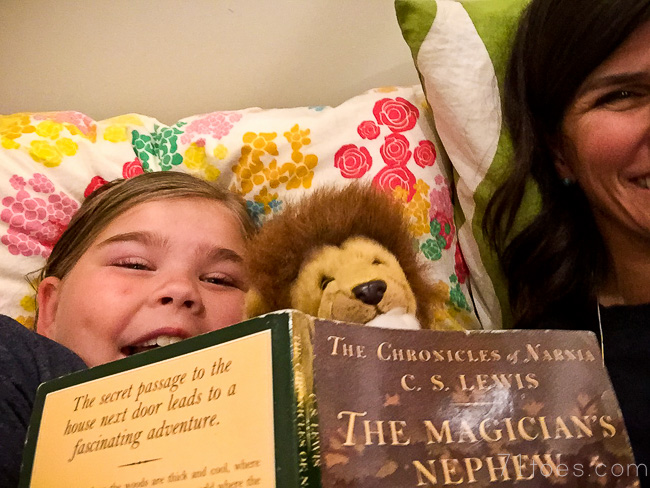 And I want to remember how it felt.

How it felt to have her body curled up at my side.

How she seemed compelled to comment on every little thing that happened trying to link it back or questioning why such-and-such would happen in that particular way…and the mini discussions her pondering led to.

And most importantly when she she just knew the lion in the story would turn out to be Aslan himself.

Each time he was mentioned she would lift her head up and look at me all wide-eyed and gleeful (see her face in that first picture?  Imagine that over and over again with a sharp intake of breath and glowing even more happily) and announce in amazement that this was going to be Narnia and “I just knew it!” when the lion made his appearance.  And especially when the name Aslan was first mentioned.

And I love that she would try to sneak ahead of me if we couldn’t read together. 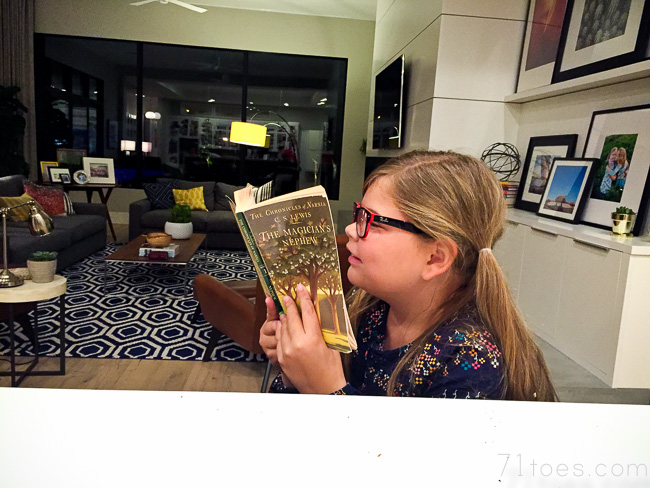 I’m telling you, that was a good read.

I love his imagination and how clearly he believed the same things I believe.  And I have loved talking through all the symbolism with Lucy and her lit-up eyes when she really got each part.

Without spoiling the book for those who haven’t read it (and if you haven’t you should…it is so good), it’s about two children (Polly & Digory) who find their way (through a wild series of events) to Narnia just as it was being created.

It was created by a song.

A song which Aslan sang.

How beautiful is that when you think about the creation?

Oh there are some pretty spectacular parts.  There’s a witch who so perfectly symbolizes evil, a tree of fruit she tempts Digory to eat, lots of symbols of good and evil and service and love.  The book is HERE

with all kinds of reviews.

But the part that struck me most this time around is when Uncle Andrew, (Digory’s uncle who happened to travel with them there, and who is a willful and not-very-nice man) decides Aslan is wild and couldn’t really be singing.

“When the Lion had first begun singing, long ago when it was still quite dark, he [Uncle Andrew] had realized that the noise was a song.  And he had disliked the song very much.  It made him think and feel things he did not want to think and feel.  Then, when the sun rose and he saw that the singer was a lion (‘only a lion,’ as he said to himself) he tried his hardest to make believe that it wasn’t singing and never had been singing–only roaring as any lion might in a zoo in our own world.  ‘Of course it can’t really have been singing,’ he thought, ‘I must have imagined it.  I’ve been letting my nerves get out of order.  Who ever heard of a lion singing?’  And the longer and more beautiful the Lion sang, the harder Uncle Andrew tried to make himself believe that he could hear nothing but roaring.  Now the trouble about trying to make yourself stupider than you really are is that you very often succeed.  Uncle Andrew did.  He soon did hear nothing but roaring in Aslan’s song.  Soon he couldn’t have heard anything else even if he had wanted to.”


Lucy and I talked about how sometimes we can hear that “song” as God tries to direct us and help us through the mountains and valleys of life.


Sometimes we listen so well that the song is almost more beautiful than we can bear and we are at such peace.


But other times we, like Uncle Andrew, talk ourselves out of that singing.  We hear only roaring and the darkness looms up around us.


I believe so fully that the Spirit strives to “sing” to us in unique ways and guide us through life as we spiritually create things around us.


If only we will be still enough to listen.


Of course Lucy won’t understand all that explanation until she hits more of the bumps and triumphs of life, but I know she hears so much of the singing right now, I can see it in her face.  And she listens so well.  How I hope she can always hear it.  And that my other kids can as well.  And that Dave and I will always strive to listen.


And in the dark times that come, I pray that we will remember how the song sounded and seek to find it again.

the rest of the Eyre visit…

baby steps to justification and a book that...

A little nudge that led to an incredible...

speaking of independence: some good books and the...

genuine questions and “the gospel according to me”...

What a beautiful post! I am in the middle of reading Prince Caspian with my 3, 4, and 8 year old. There is a part where Lucy sees Aslan but only Edumund believes her. My older girls were so upset that the older children and adult dwarf didn't believe Lucy when she is so certain she saw him. This is a familiar theme throughout the Chronicles of Narnia, just like it is a familiar theme in life (and similar to Lehi's vision). Sometimes no one believes with us, but we must always believe.

I adore CS Lewis. Every single one of his books for adults and kids. I haven't read these with my kids yet. I will have to start… tonight!

Did you know that Aslan means lion in Turkish? 🙂

I love this post, Shawni. Love the bonding moments you and Lucy had through this book and also love the thoughts at the end, about the Spirit and listening to the "song." "If there is anything virtuous, lovely, or of good report, or praiseworthy- we seek after these things." (Article of Faith, 13)
Lisa

Thank you Shawni, for that lovely post. It reminds me that I haven't read it with my youngest two sons. I'm going to do that right away. Your thoughts about the "song" remind me also of a conference talk from last April, by Elder Wilford A. Anderson, "The Music of the Gospel." Thanks again! How is missionary mom doing?

We love CS Lewis too! Mere Christianity is my favorite book of his, have you read it? It's amazing!

This is so profound… thank you for sharing! You put into words what I was thinking. That is so awesome.

That was so beautiful, thank you. EXACTLY what I needed today. 🙂

That is so beautiful! Such an amazing symbolism and likeness to us.

Love this Shawn. Reminds me that I need to go and re-read the whole series with Em and Peter. I love all of them so much, such great read alouds. But I think my favorite are the first (this one) and the last (the last battle). So many profound things to think about, presented in such a way that everyone (kids and adults) can really get it.

Love this Shawn. Reminds me that I need to go and re-read the whole series with Em and Peter. I love all of them so much, such great read alouds. But I think my favorite are the first (this one) and the last (the last battle). So many profound things to think about, presented in such a way that everyone (kids and adults) can really get it.

I know this comment doesn't really "go" here, but it's where I'm putting it, ha! I notice you wear a lot of knee length skirts. Do you have a certain brand or favorite place to shop? You seem tall and I'm curious where you find skirts at a decent length. I figure I'm looking in all the wrong places because I cant seem to find many options down South. Thanks!

What a beautiful post! We have been reading C.S. Lewis' other books in Inklings the past two years and I've kind of forgotten to remember this wonderful children's series except in movies…which just can't really get it right. The words straight from the book are so profound! We are doing "The Problem of Pain" in March. Deep magic!