April 28, 2016
Ok, so I’m going to have to do this whole tennis season wrap-up dealio in two sections because there are too many thoughts and heart-strings attached.  I can’t possibly wrap up a whole four years of Elle playing high school tennis in one measly post.  So bear with me.
Today I’m just going to wrap up the regular season and singles stuff.  I’ll get to the state doubles tomorrow or next week.
It’s been a great season. 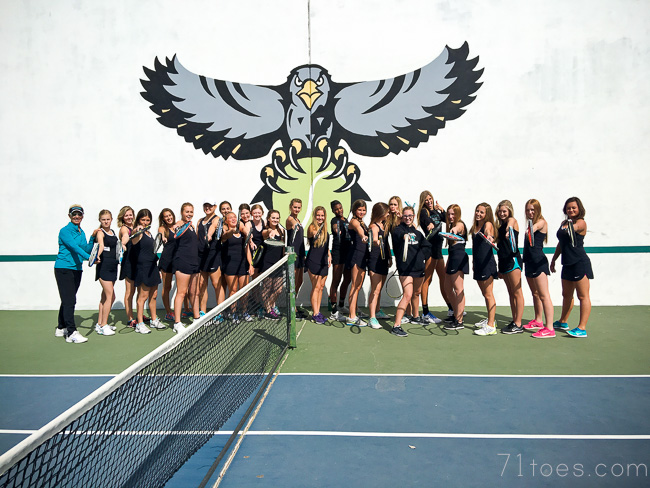 That’s a large tennis team!
It was so great to have Grace on the practice team this year.  LOVED seeing her there with these cute girls: 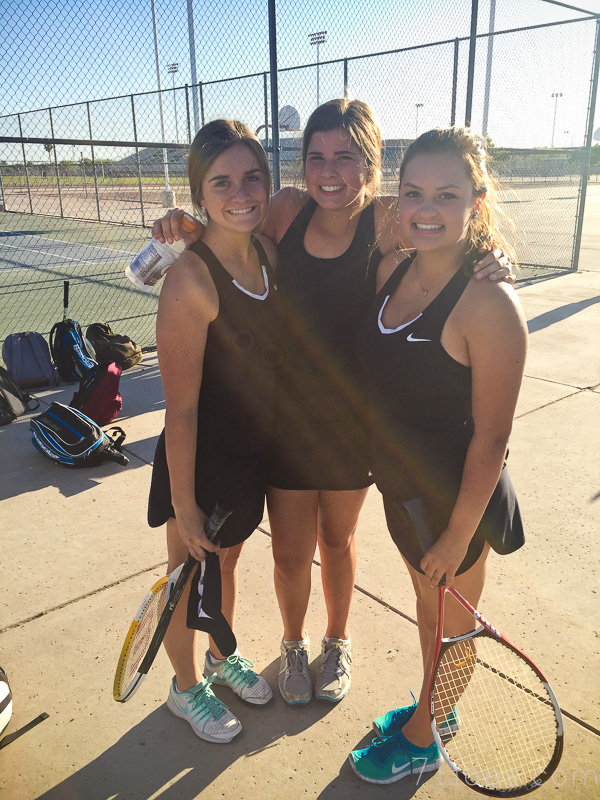 …and loved watching the matches she got to play.
Since the “practice team” only went to practice a couple times a week and only got to play a handful of matches, I only have a couple pictures of her playing: 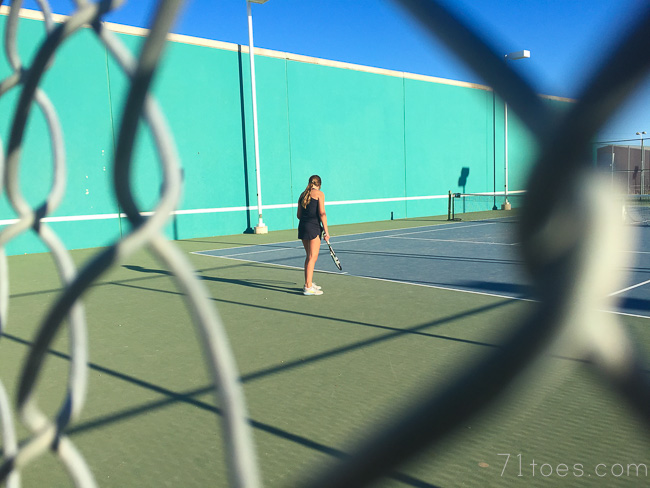 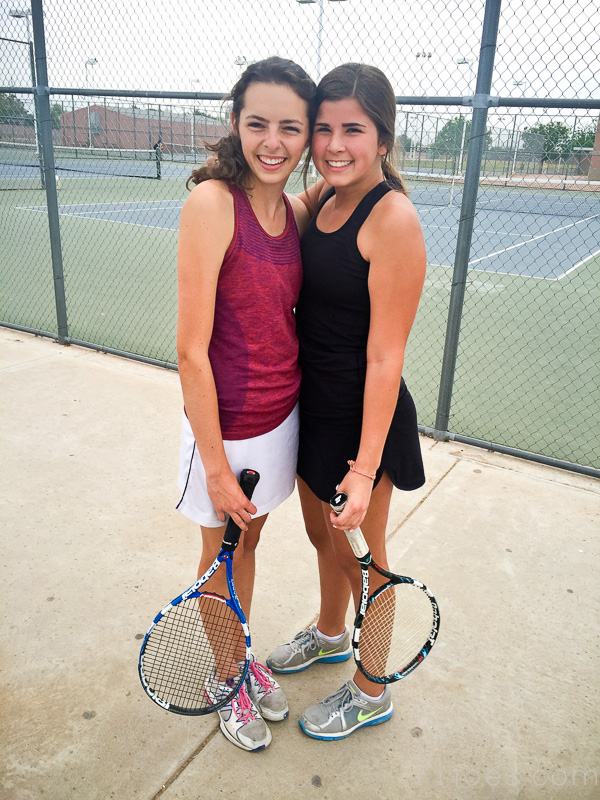 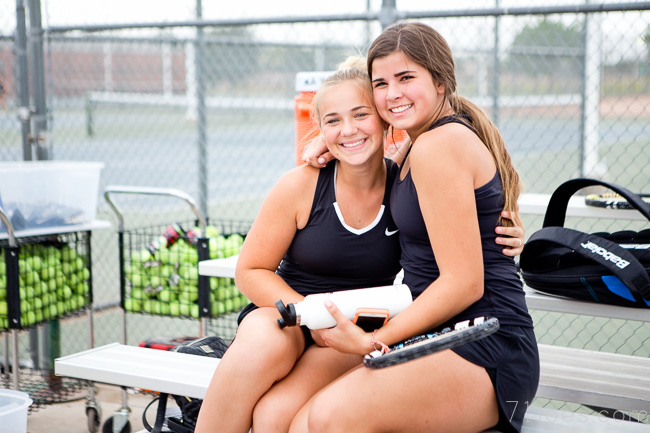 Although she didn’t get to play a ton, I think that little bit of exposure made her excited to get serious about taking lessons and get this tennis party going.  I hope it ignited a little fire for Claire with what she saw as well.  Tennis is just such a great sport!
Here are the Varsity girls this year: 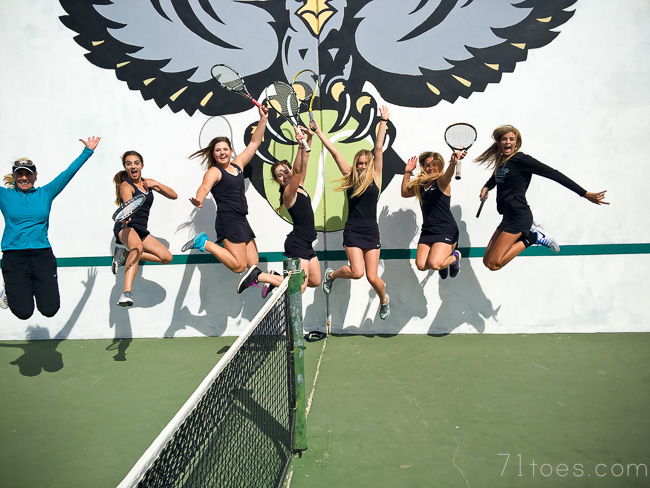 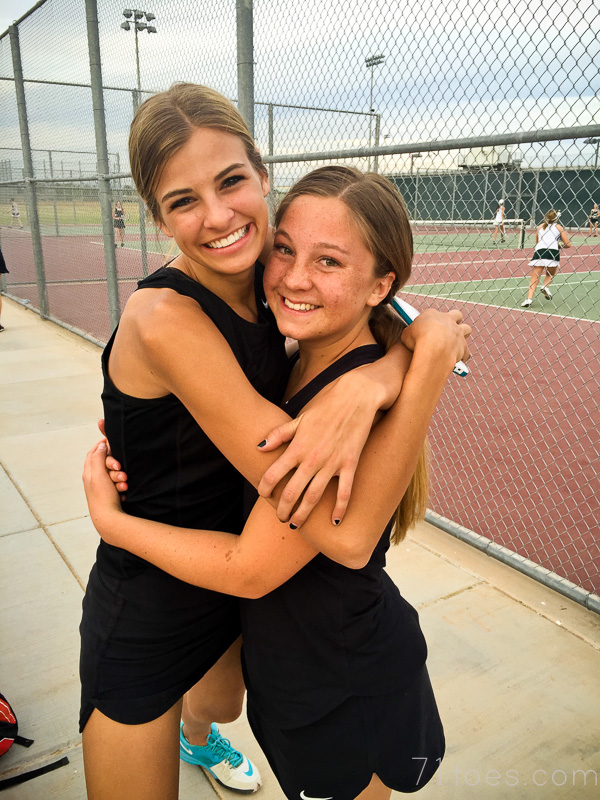 Man, we have watched SO many games with these girls together! 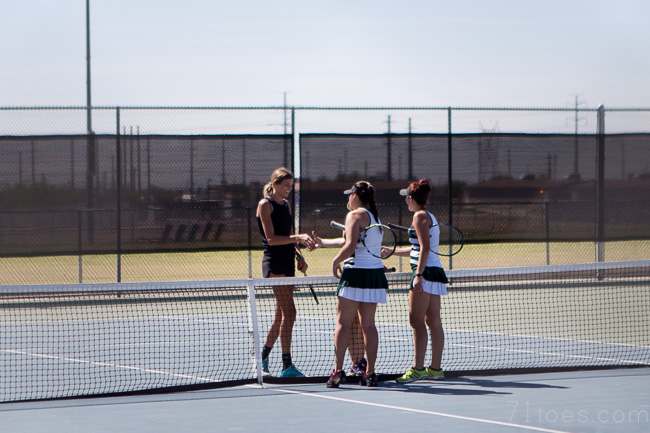 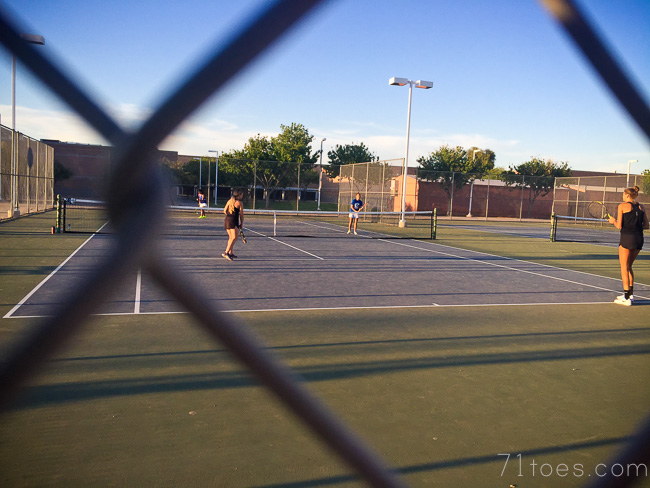 …and have watched some brilliant rallys and pretty amazing “miracle” shots.

Love that Elle’s friends came to cheer her on a few times: 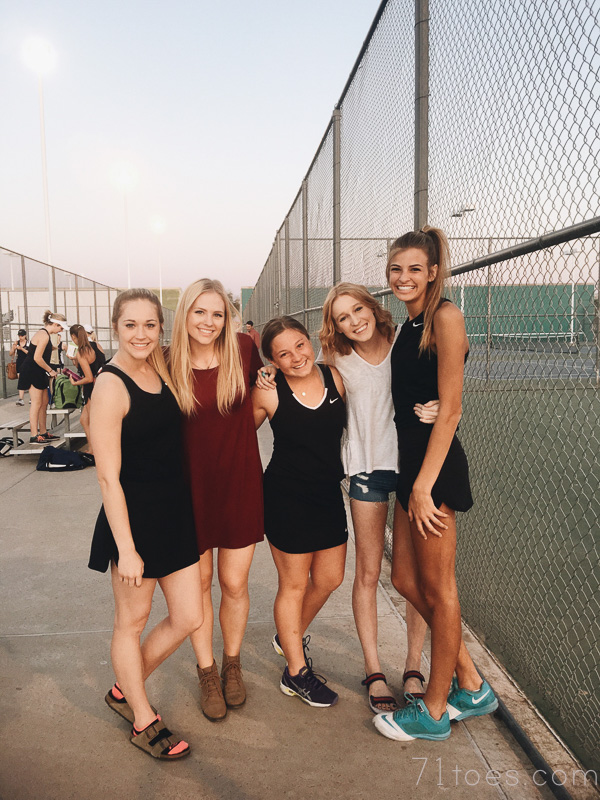 …and that she played half the season in these shoes: 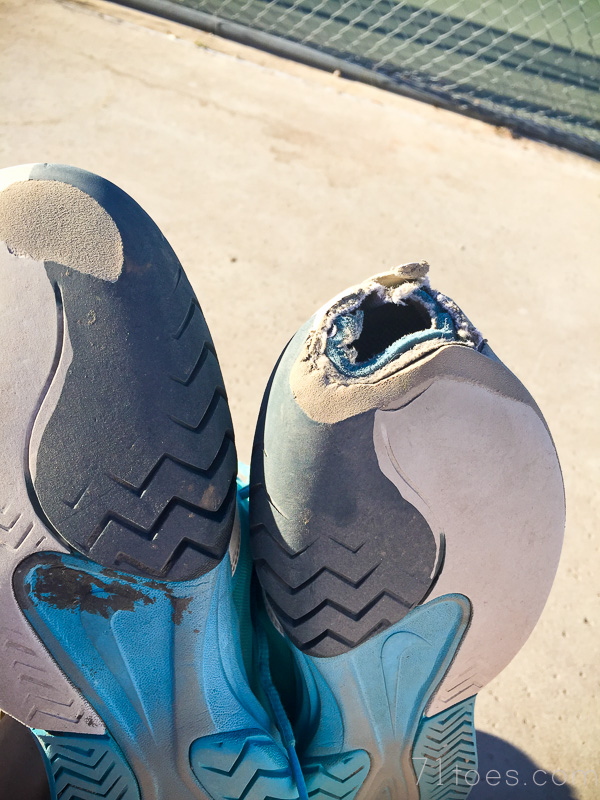 I’m serious right now about that.  This happens to every pair of Elle’s tennis shoes…don’t even ask why either of us let those get that bad.  I don’t even have vaguely reasonable answer.
We did super well at the beginning of the season, then got lined up with some pretty outstanding teams at the end so we ended up so-so as a team, but boy howdy, it was so fun to watch every second of everything we could get to.
One of my favorite parts of the tennis season is when the sun slants just so, the shadows stretch out, and most of the other matches are done and over.  Everyone gathers to watch Elle and Emma whacking away at the balls on the last doubles court of the night (they are the number one varsity team, and tend to have longer games) and they put on a good show (most of the time). 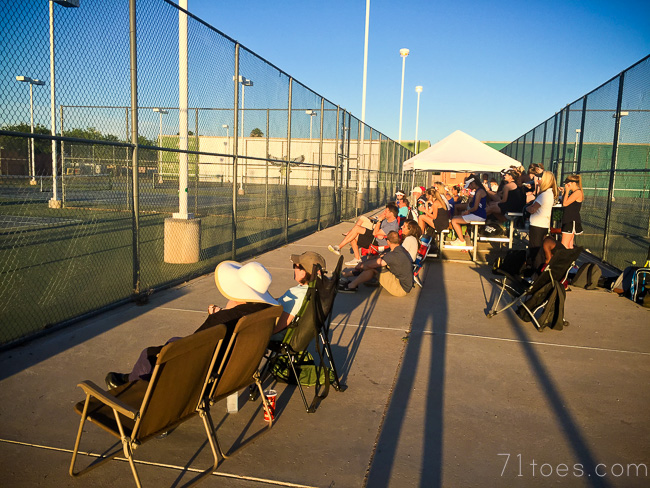 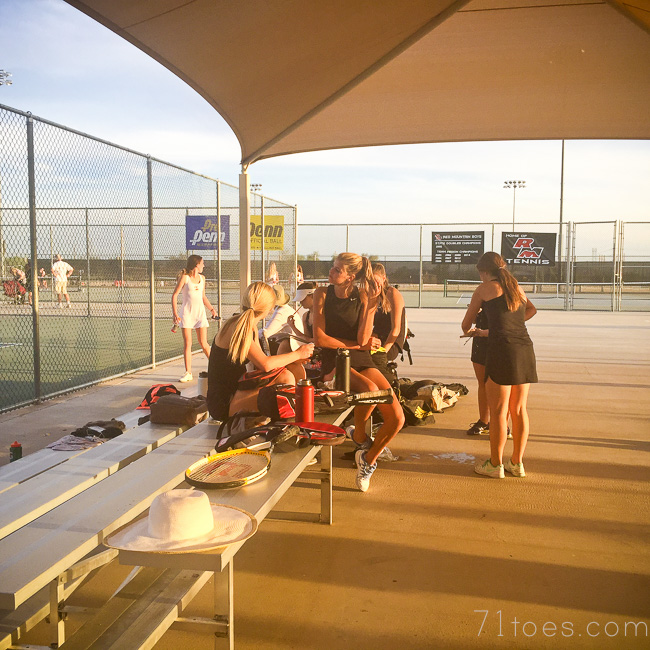 We played some fun tournaments outside of regular matches. 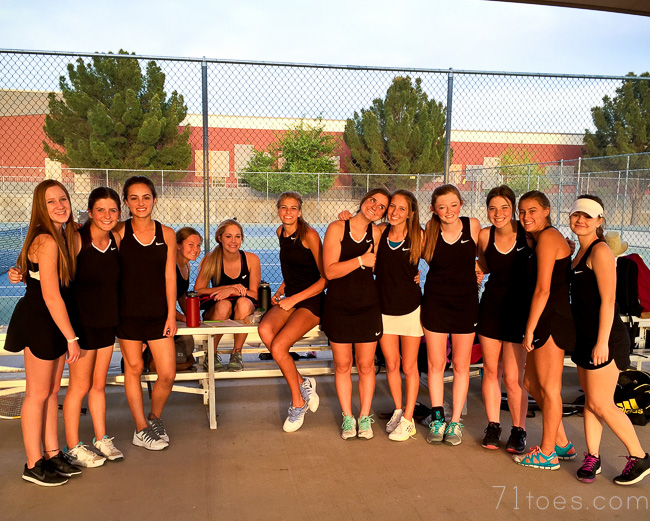 And Dave and I have these dear friends we get to watch all the games with on the sidelines: 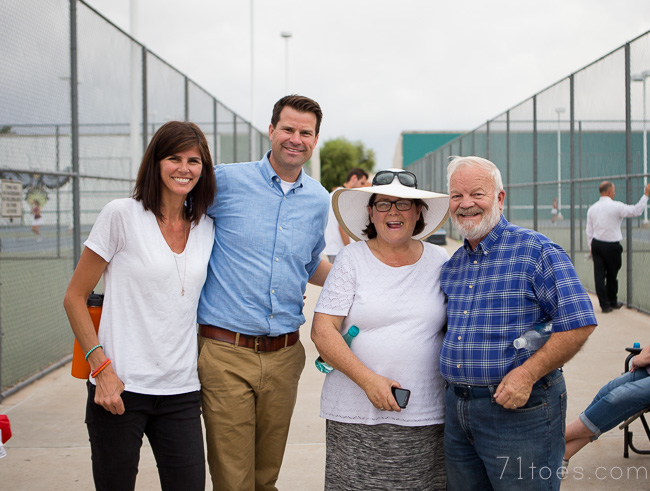 Those are the parents of Emma (Elle’s double’s partner), and they are just the best.  Emma is youngest of eleven children (yes, you read that right!), and her parents make us realize why that girl is so delightful.

We are going to go through withdrawals from tennis, not only from watching our girls, but from sitting by these two.

Every so often we got an extra side-kick with us on the sidelines: 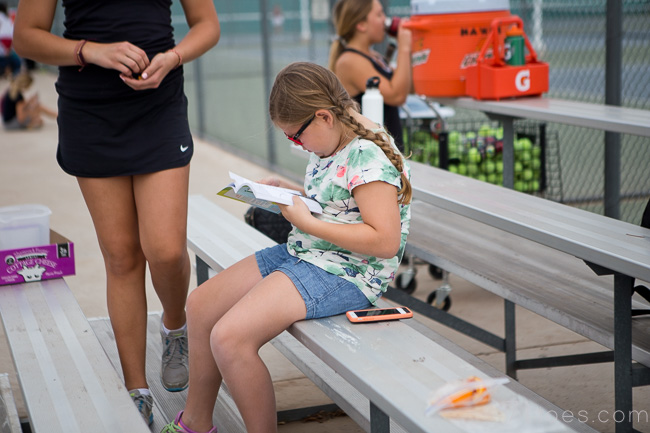 (She was obviously mesmerized by the match.  Ha!  I think when she realized she couldn’t whoop and holler in her cheering like she can in volleyball games she gave up to read…and ask forty-five times when it would be time to leave.)

We sure love her anyway:) 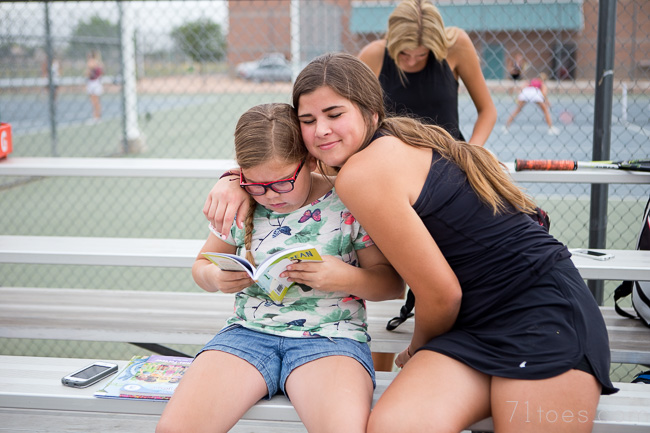 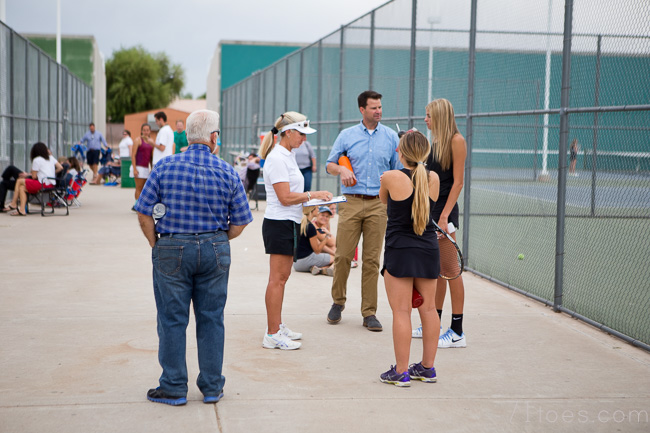 Elle did really well in singles:

She is so fun to watch, and I love when she plays at the net.

I don’t have a good picture, but just imagine those super-long arms reaching and being able to get a lot of shots you don’t think would be possible.

This picture doesn’t show it (I think at this moment they were too distracted by the other match), but I’m going to miss watching her shoot the breeze with her opponent during their breaks at the net.

I always wonder what in the world they talk and smile about in the middle of a heated match.
Singles are great, but her light really comes on after singles when she plays doubles.
Doubles is what she played at state.
And we’ll get to that soon.
For now, we’ll wrap up with senior night and the last banquet.
We had an on-the-ball mom who whipped up a great senior night.
In tennis it’s not quite like the huge family banquet and slide show we had each year for volleyball.  But it’s pretty great to get to honor those seniors that last night of the regular season.

These were the four seniors this year:

With their great coach and tootsie roll leis that great on-the-ball mother made for them.

(Wish I had a close-up, thew were really cool.)

…and she also had the girls sign these cute frames:

A day after that last match, they had their end-of-season banquet (no parents allowed). 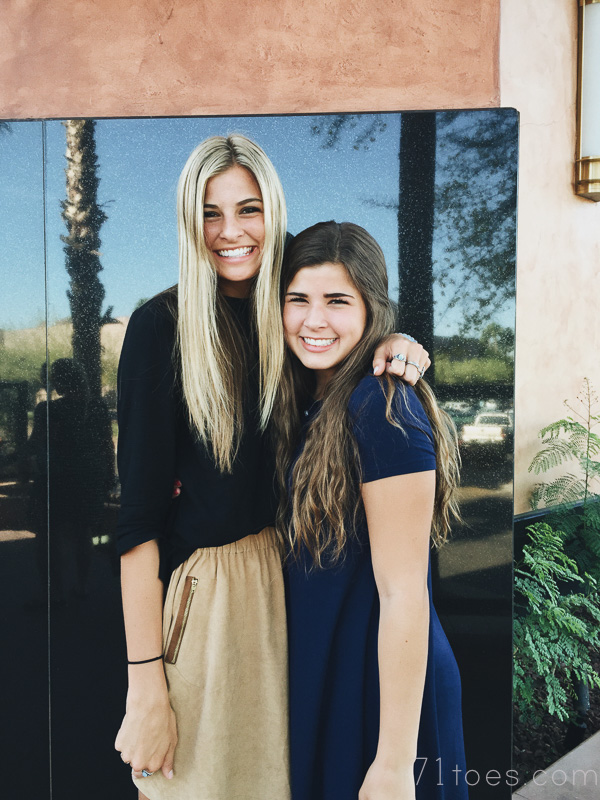 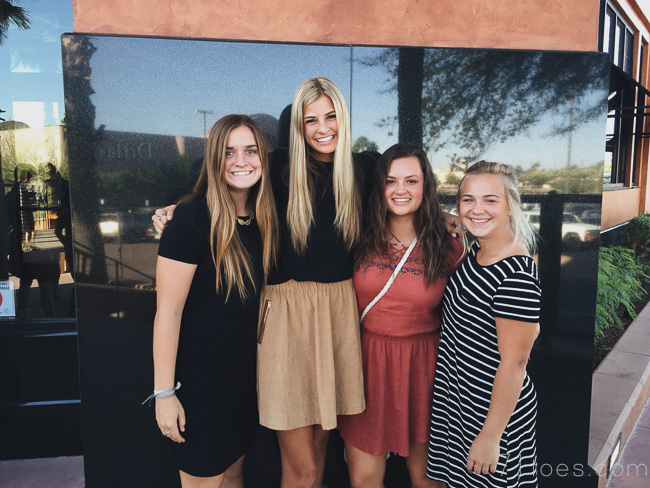 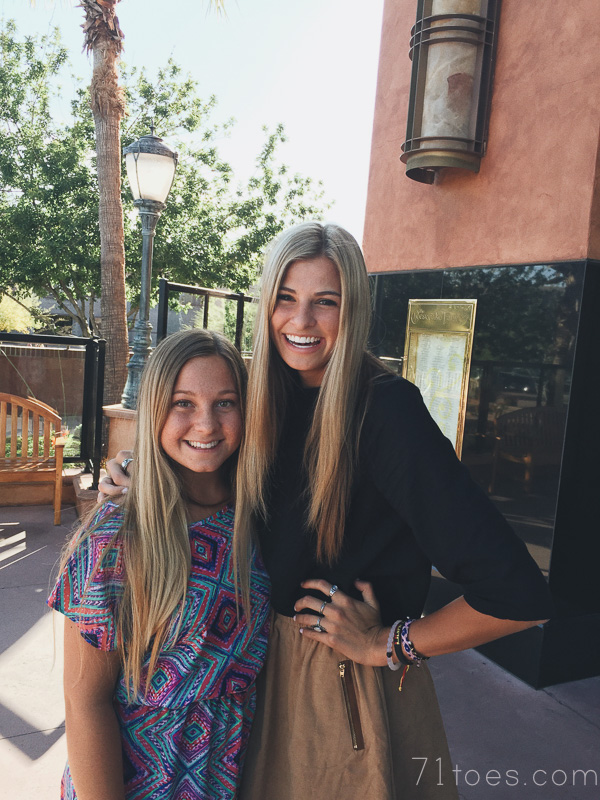 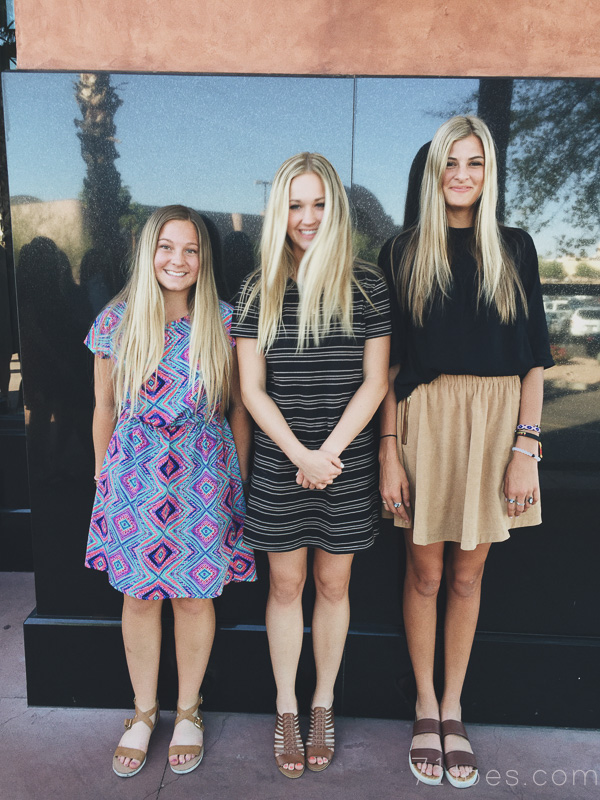 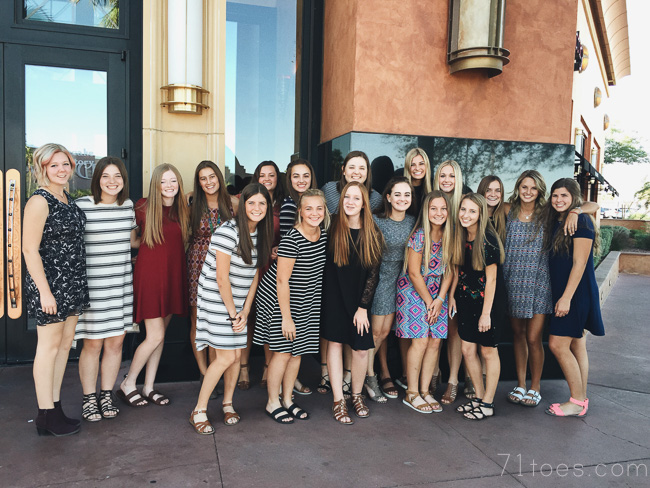 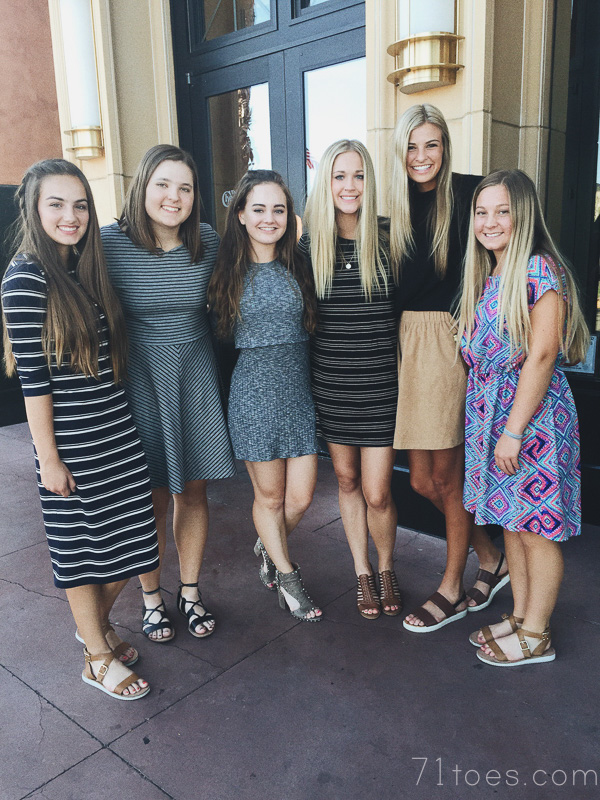 They got awarded some funny certificates and reminisced about the season and it was a wrap for most of the girls.

Then it was on to state.

thoughts on writing and reading

I love this post! I have a 10 and an 8 year old that have done tennis camp the last couple summers and everytime I see your tennis posts, I hope and pray they will stick with it and I will get to watch them as they get older too. Random question, what brand are Elle's sandals in those last couple pictures?

Time goes by too quickly. My children played tennis through their high school years. I miss going to matches and tournaments. Thankfully, they all kept playing tennis during college, and before and after missions, etc. It has become a great family activity, too. Good luck.

How fun! I love watching tennis. I keep hoping that my daughter will want to play someday.

Also, I loved your last post and have been mulling it over for a couple of days. I have always LOVED reading and writing. I learn best when I write things out to process them, and have recently started writing stories. It's such a creative and fulfilling outlet for me, one I wish I had discovered sooner – and mght have if creative writing had been an option in high school. Science and Math are important, but you're right I wish they'd emphasize reading and writing more. Both broaden your view of the world, and help you explore yourself. You've inspired me to try and focus on it a little more with my kids.

Just curious, how old were your girls when they started taking tennis lessons? My oldest daughter is starting lessons this summer and she's 10 years old. Hoping we're not starting her too late. We've played as a family, but never private lessons.

What a sport! So glad we at least got to see a few matches! Can't believe that girl is moving on! She'll be great at whatever she decides to do! Can't wait to be there in a couple of weeks.