June 28, 2016
Yes it’s late on a Monday, but still Monday 🙂
There’s so much happening in our family right now, and that of course includes Max over on the other side of the world in Taiwan.
He has been “training” with his first “on island” companion for twelve weeks, and he got a new companion as of today for his first “transfer.”  He’s staying in the same area, rural south Taiwan, so he’ll be showing his new companion around.
He loved his trainer and has learned so much from him.  We all feel so grateful he got such a great kid to help him adjust to mission life.
Each week we hear from this boy of ours, and usually the letters start out something along the lines of,  “This week has been one of the happiest weeks of my life.  Not a lot of super awesome miracles happened, but I am just so freaking happy to be a missionary!”
And he ends all his letters with a little Chinese.  張豐驛
And sometimes there’s not a whole lot in between 🙂  But other times he does a pretty great job answering our questions.

This is his first district: 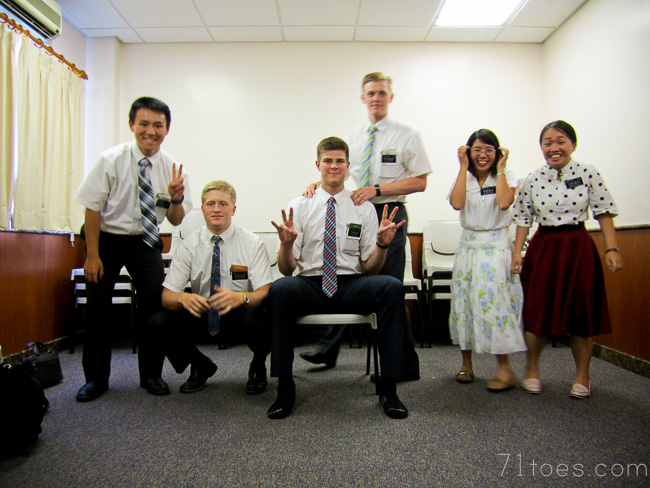 He is feeling a lot more confident with the language, but it takes a lot of work.  He and his companion have been getting up extra early to study it, and then they go out and talk, talk, talk with the people which has got to help a lot.  He says he’s getting used to the different foods and is starting to really like it. 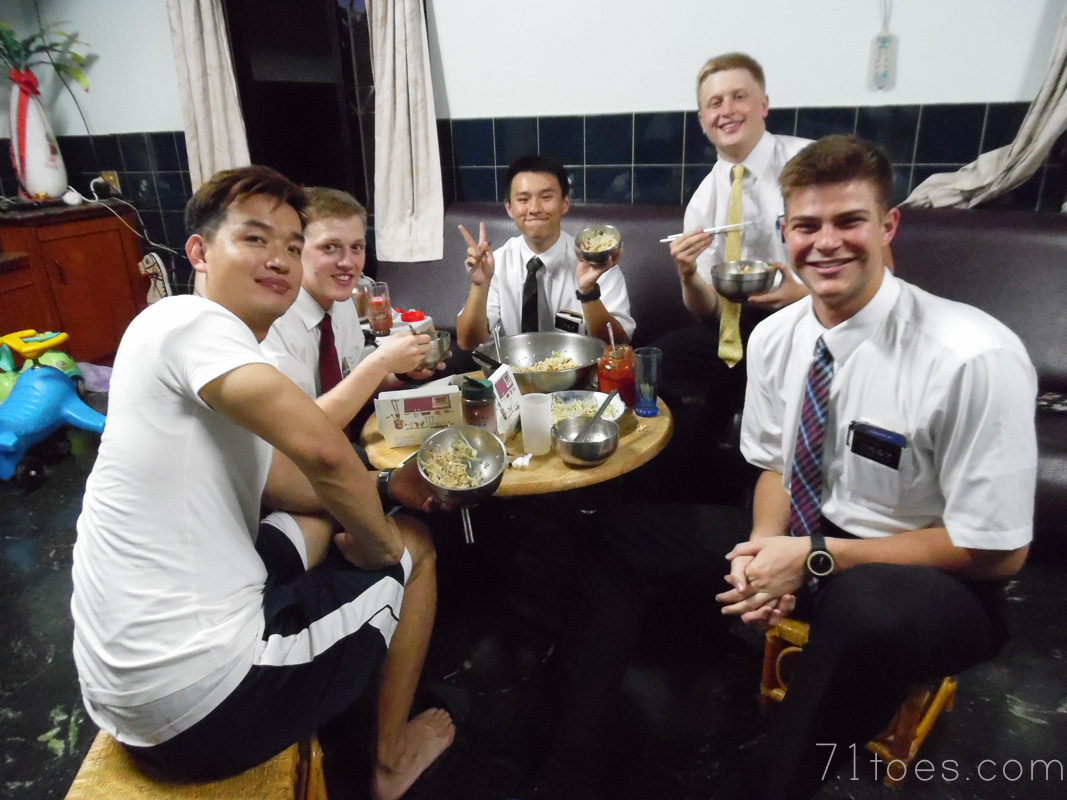 They teach an English class once a week (I think)…here is a picture of some of their students: 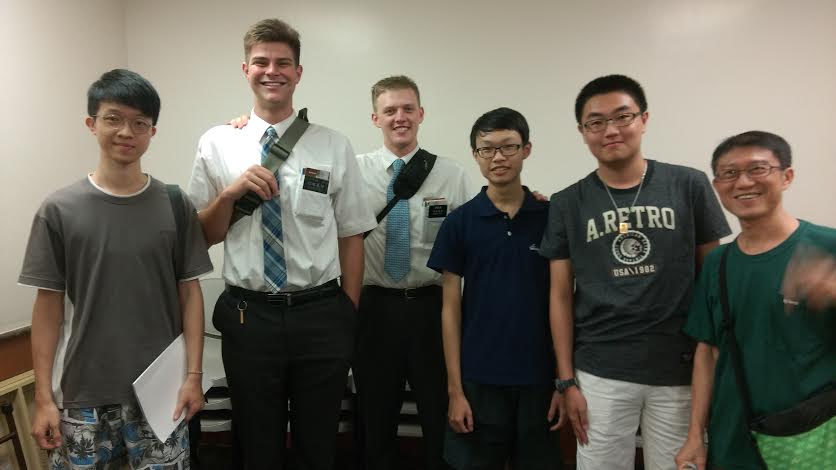 He sends us some pretty random pictures and I love to see into more of his life over there. 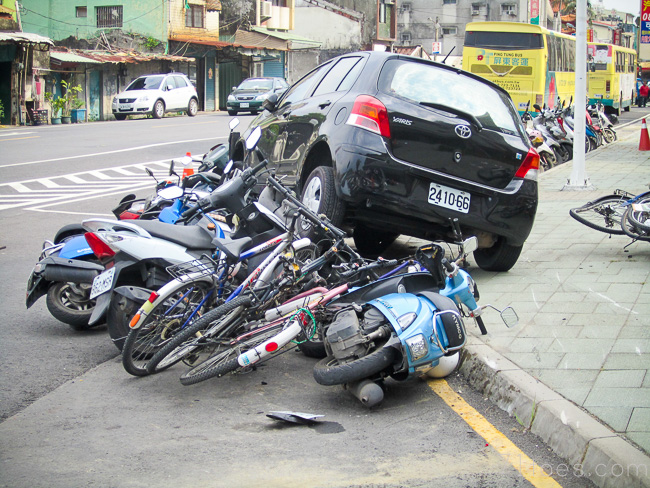 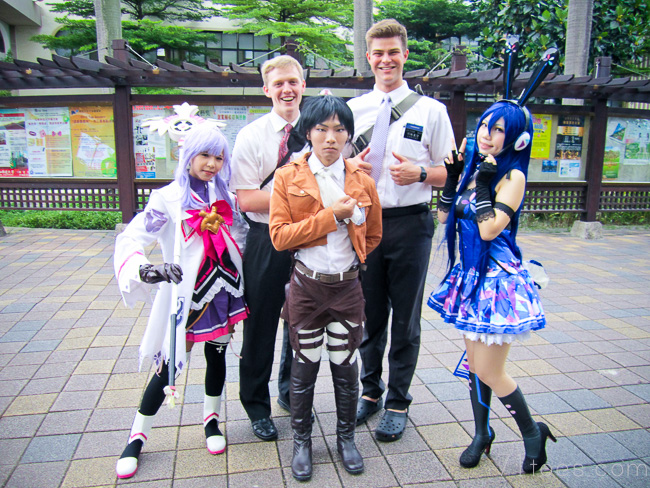 He was so happy to run into one of his good friends from high school who is in the same mission one week at a group training meeting:

It is rainy season over there and I think he gets drenched a lot.
Here’s one of his letters answering Dave’s questions:

Hey Dad! This week was super hard with the rain and the people but super rewarding and satisfying. I went on exchanges with one of our Zone Leaders, he is super awesome and I learned a lot from him! He was super good with testifying and inviting everyone. And he was also super good friends with Howie in High School!
I finished all my pass offs this week! So now I am able to work on other stuff like common words and characters. Right now for studies Elder Porter and I wake up at about5:45 and study the language and try to do a good workout (try) I am trying to memorize the first box of characters right now because I don’t have the common words box yet. then during set apart language study I do gospel stuff and terms and phrases.

We also do this thing in the back of our planners where we write down all the words we hear and don’t understand and translate them and so I study that during the meals and stuff. Chinese, its crazy!
P-Days are usually emailing and errands! most letters are from missionaries I love reading them!
Fav part of the day besides personal study is 6-9pm contacting! We usually go tracting [go out and just talk to random people on the street] and its super fun because I meet so many interesting people and we get to meet a lot a cool families(Who usually reject us)
I don’t hate any of the food, I love somethings more than others but I am getting used to the fishy taiwanese taste.

One p-day they took a little trip to this cool place: 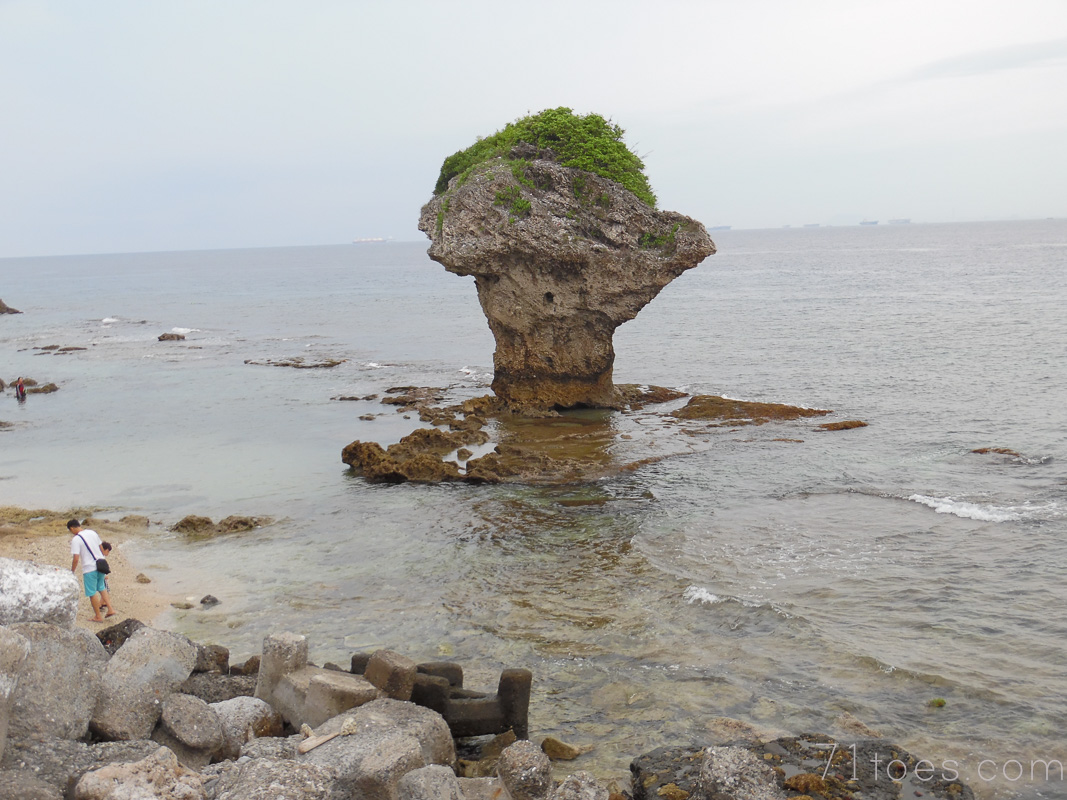 (P-day stands for “preparation day”…kind of their day off to do laundry, grocery shop, explore, etc.)
They bike all over the place. 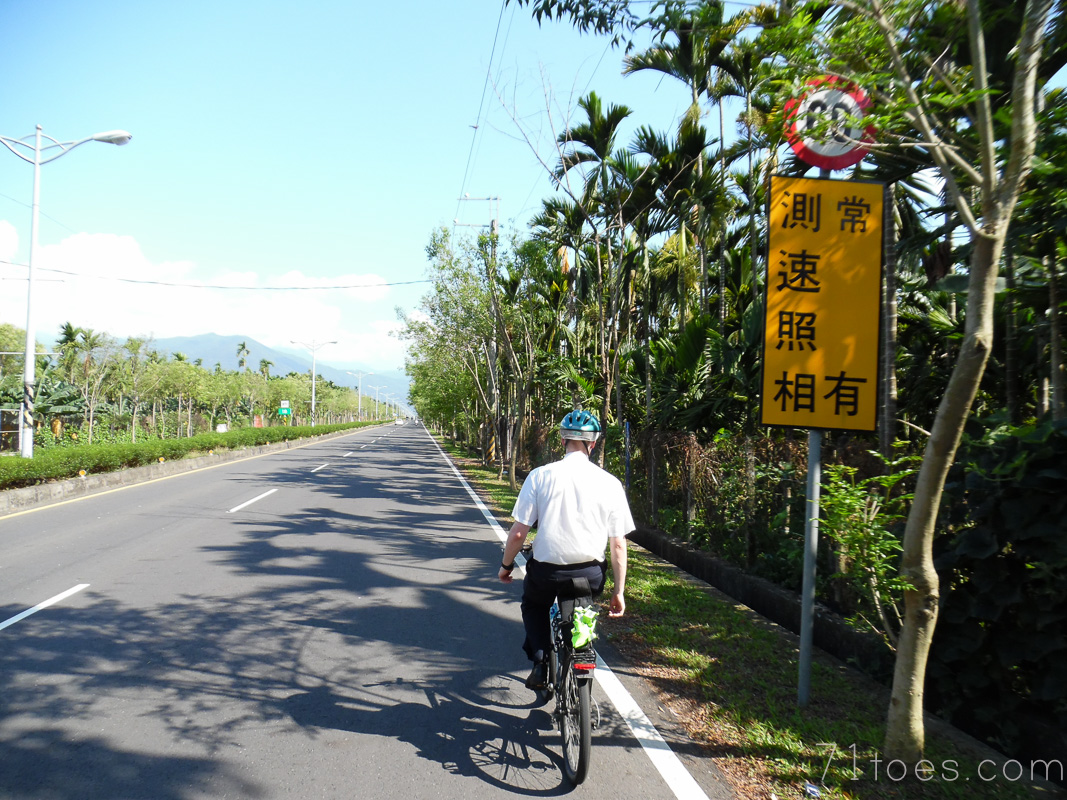 Dad, Thanks for the awesome letter! I can’t believe Elle just graduated!! What the heck??

Honestly the mission has been super awesome. There are some growing pains with it, there are some stresses, but none of it is super big but I do write it all in my journal. I just feel like its all going super 順利 right now but I know it will get harder fast. Of course the mission is super uncomfortable and weird, talking to strangers about how a guy that they have never heard of is going to help them, but I am getting used to being uncomfortable.

The language is actually going really well. I feel like this week I broke a barrier with it, I can have some conversations with people pretty fluidly now. There are always those people who I just nod my head and agree with though, hahah. This week Elder Porter and I made some calls and for the whole hour I had my own phone and never had a problem talking with people. The Lord is helping me so much, I can feel His influence in every part of the work, and praying for miracles will bring them!
Any tips for me? With anything? anything you learned on your mission that was super valuable to you?
Love the fam so much read this to them! Love you guys!

His companion sent this picture: 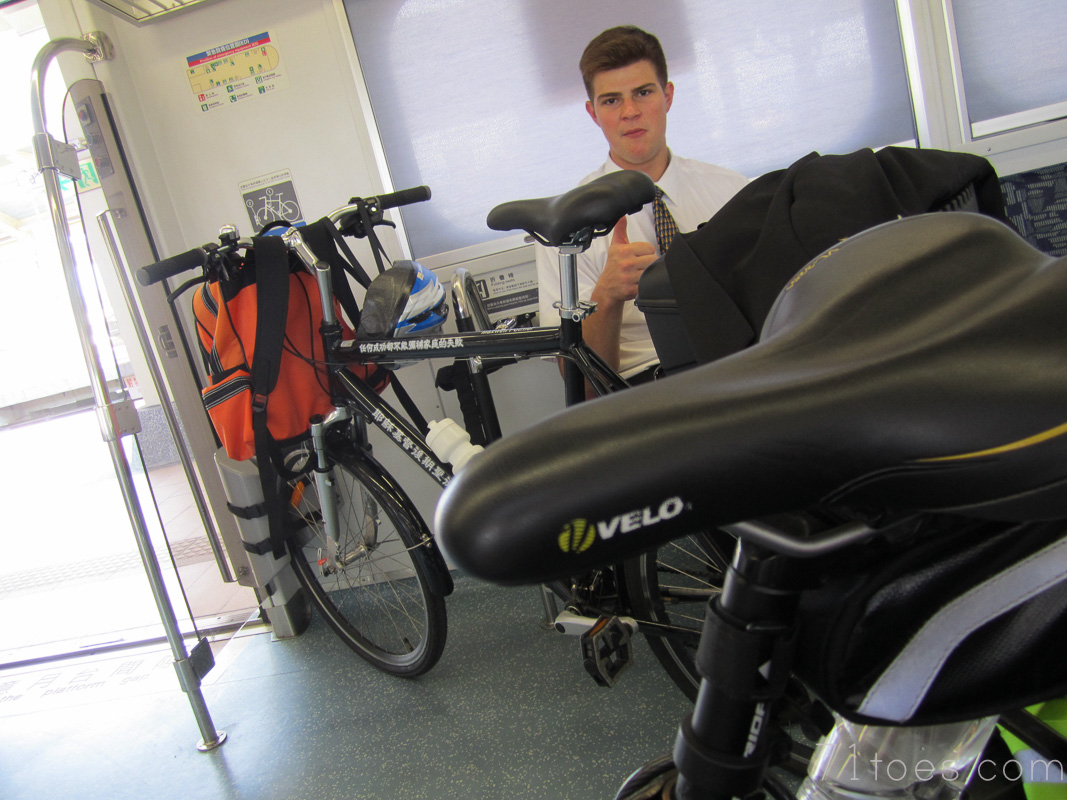 And then today, those cute boys said goodbye to each other… 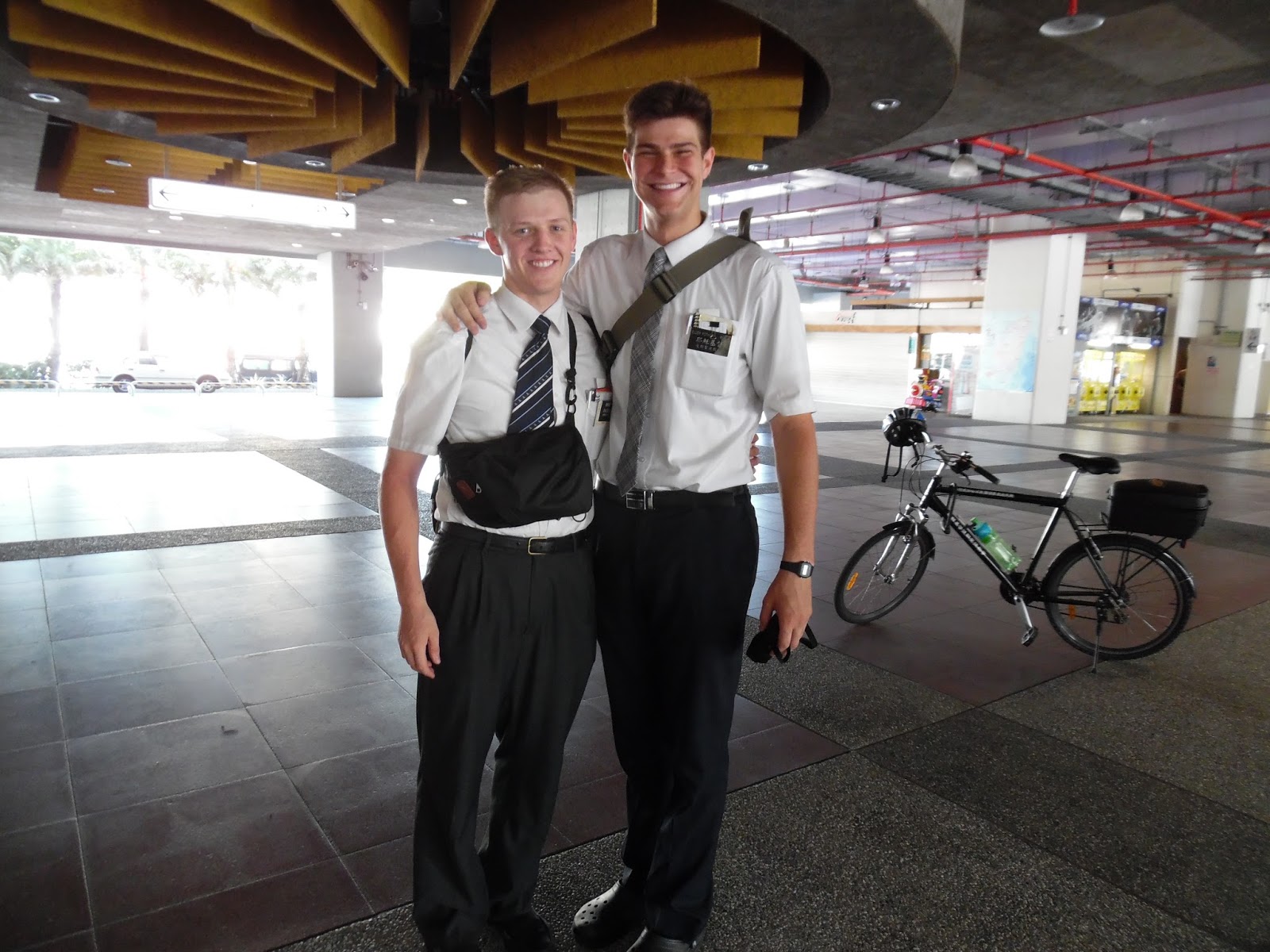 .. and set off for new adventures.
Not only does Max have a new companion this week, he gets a new mission president too.  Remember this miracle story back HERE? 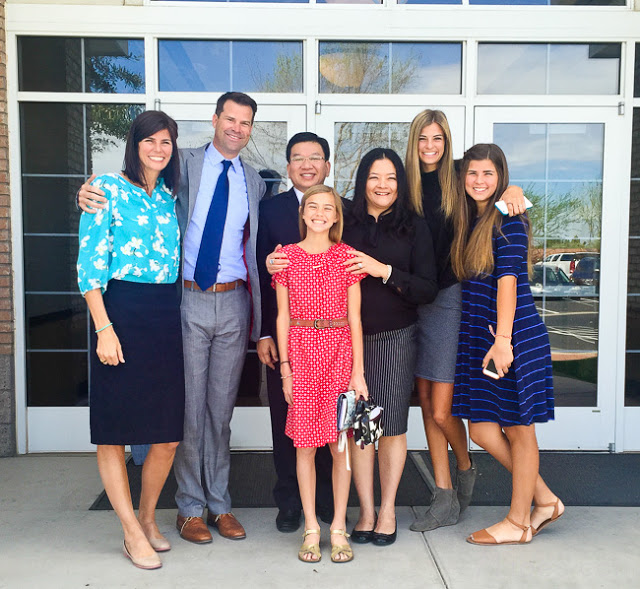 Yes I already posted that picture back there, but I’m putting it here again because I loved this day so much.  Go back and read that story if you want more details.
So it’s off for all kinds of new adventures for this boy of ours.
Sometimes I miss him so much it physically hurts.  There were some times when we were on our family trip where I had to catch my breath for a little bit because I was missing him so much.  Sometimes it doesn’t seem right that everything isn’t just frozen in time while he’s gone.
But of course all of us must keep going and learning and growing even as we are missing with all our souls sometimes.  And even with the missing, there’s no where else on the planet I’d rather have that boy of ours be right now.  The growth and love filling up our inboxes on Sunday nights is almost tangible and I’m so happy for him and so grateful for the example he is to each of us back home.
15 comments 1 FacebookTwitterPinterestEmail

resilience and mission comings and goings

inspiration and love from the heart of Texas

a very happy reunion with our missionary Grace...

I heard it is illegal to try and convert people to Christianity in China – is that still the case, and if so, how do missionaries like Max ensure they don't cross lines and find themselves arrested? I can't even begin to imagine how hard it must be to speak to people in such unfamiliar language about something they know very little about!

Fortunately it isn't illegal to convert someone in Taiwan. Missionaries can serve in Hong Kong but no other part of the mainland China.

It can be to their advantage though to not know anything, even about God. My father served in Japan and found that it was important to teach the basics about God, then Jesus Christ then the restoration of the gospel. I don't know if that makes sense but that's how I perceive that it could be easier because everyone is on the same learning level

Taiwan isn't a part of China…

Two of my brothers served in Taiwan and I remember them talking about the acid rain during the rainy season. I can imagine how rough that would be as a missionary when you are constantly outside! He looks so happy, though. Max has such a great smile!

It must be really hard to have your son so far away and not be able to speak on a daily basis. I can't even imagine! (I think Max's favorite word is "super"? 🙂

Ha! Yes he sure loves that word, and believe it or not, I took out some of the "supers" before I posted. Love that boy and all his supers 🙂

So glad for this extra information. We missed a bit while you were gone! You are the posting master since you got home though! Awesome!

So glad for this extra information. We missed a bit while you were gone! You are the posting master since you got home though! Awesome!

Just love your blog and your cute missionary. Thanks for posting. Sorry for being obnoxious, but I am also tall and that skirt in the last picture is the perfect length. HOW??!! WHERE?! NEED!! hicken@gmail.com

That was a tall size from the Gap a while back. Just click in tall skirts and they usually have stuff.

I love these updates!

p.s. In the first 2 pictures, one of the missionaries kind of looks like the President of BYU-Idaho's son! Not sure if it's him though haha

Yes that is him! They were roommates for a bit which was really fun since I'm friends with his mom. He's such a great kid!

His description of learning the language and learning how to communicate over there reminds me of my 2-year stint in Japan right after college. I learned as best I could, but I did a lot of nodding and "mmm…"-ing. I had a funny conversation with a Japanese friend about 1.5 years into my stay, where I was saying how hard it was for me to understand when native Japanese speakers were talking with each other (they'd usually slow down and use simpler words when talking with me). And my friend said, "Yeah, but you understand most of what we say, right? It seems like you understand about 80-90%." And then I realized how effective my quiet nodding and "mm-hmm"-ing was because in reality I was *maybe* understanding 40-50%!

Two parts of this post really touched me: 1) When Max said "the Lord is helping me so much," and 2) when you mentioned how it can physically hurt to have him so far away. My kids are still very young, but it is going so quickly and I know my children will be at that stage of life before I know it. I'm hoping they will also feel God's presence in their lives and hoping I'll somehow find the strength to get through the painful moments when I'll miss them so strongly. 🙂 Thank you for sharing this!