“When you are exasperated by interruptions, try

See that city rising up in the distance from this

The coolest state capitol with the most excited an

another set of smooth legs

August 30, 2016
We have some hairy legs in our family (and this is written about those legs with their owner’s permission:).  Elle and I not so much, but my three little girls have had some good little furry coats covering their legs through the years.  So when Grace was ten-years-old she decided it was time to shave her legs.
I don’t remember the details, but I’m pretty sure I must have absent-mindedly brushed off her request, telling her she was much too young and who cares if her legs were hairy.  Because come on, ten?  Let’s stay young and put off that hassle as long as we can!  But that little determined girl of mine didn’t take no for an answer (a pattern that would become more prominent in the future…that is one determined girl) and took matters into her own hands.
I wrote about the result back HERE.
Ouch.
Needless to say we had some pretty great follow-up conversations and learned a lot from that little incident.  This stuff girls worry about needs to be talked through with a mother who will actually listen instead of brushing off, so I’ve gotten a lot better through the years.
I don’t know if that leg shaving episode was one of the seeds for more communication in our family or if it just comes with having a whole slew of girls, or if Grace’s personality is just so open that things come up all the time (I really do love that), but we discuss things a lot more now that we have a bunch of girls in the midst of the whole maturation mumbo-jumbo around here.
Well, Claire is now twelve and has made it through with her hairy legs just fine.  She’s a little slower to want to grow up than Elle and Grace were.  She turned 12 in January and has never once said anything about wanting to wear make-up (my older girls were dying to wear mascara by then so that was the age we started allowing it).
But Claire finally decided (with Grace’s help cajoling her) that the time has come to get some smooth legs.  Let’s get out the razors!
Grace was pretty delighted to be assigned as the teacher this time around. 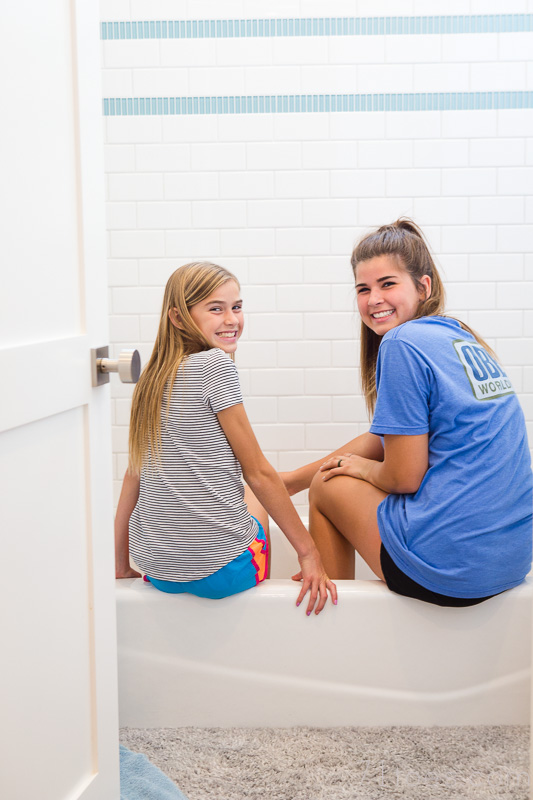 And as you can see, Claire was pretty excited too.

They worked on those suckers for quite a while… 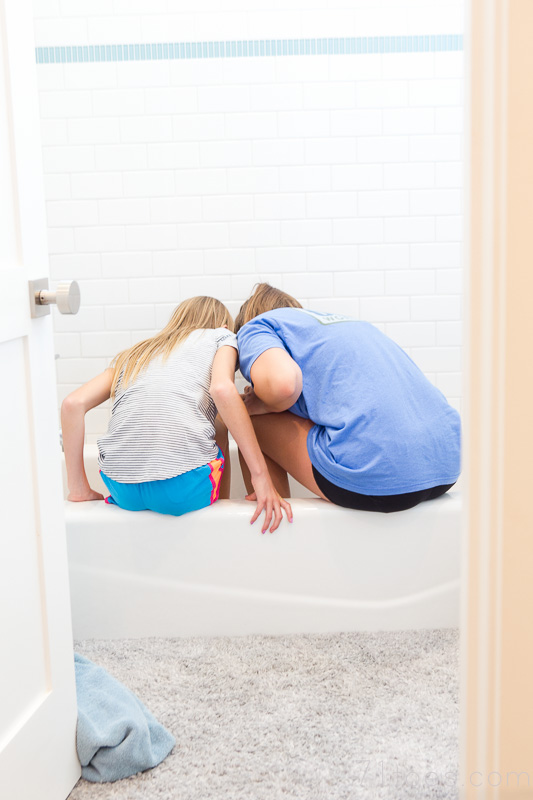 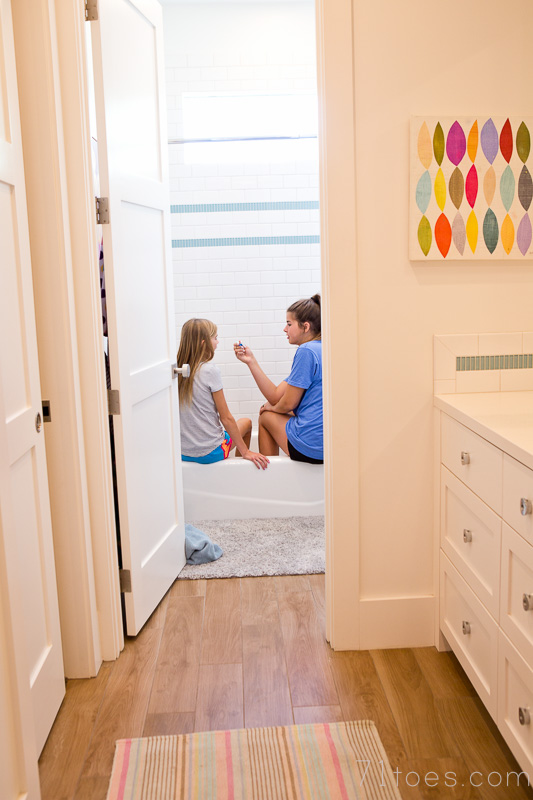 And they came out triumphant.
So far so good, no major chunks of skin taken out and some pretty smooth legs have emerged that can finally see the light of day 🙂  Ha!
It’s kinda nice to have a second mother around to help shape us up around here.
20 comments 0 FacebookTwitterPinterestEmail

a shout-out to dads

Just thinking about this milestone makes me want to hide away in a cave.

I can only imagine how much "girl talk" you have going on right about now with those 3 girls. Good for your for having open, honest, and thoughtful conversations about all this puberty stuff! You're so right, it's easy for us 40 year olds to forget how important this stuff is to tweens. (feeling thankful I have only boys right now)

But have you told them to use men's razors?! They are THE BEST!

Yes!! I came to comment just to say this!

Yes! I steal my husbands razors and it drives him batty! Which makes me want to do it more.. Since he is so laid back! Ha!

I love this cute & simple post! It makes me want to appreciate those little things more 🙂

I love this! We also have quite a hairy little one who is 11. I'm anxiously awaiting her to make the decision to shave but she's holding out. I'm planning on having her 14 year old sister assist. 🙂

Such good timing for me to read this post. I was just having this conversation with my almost 10 year old after I noticed she had tried the shaving thing without talking to me about it. That really opened my eyes that she and I needed to start having some girl talk time to ourselves so she will know to come talk to me about these things (and all the other milestones girls go through). So now, after I put her younger brother and sister in the bed at night, I go lay down in her bed with her and we have girl talk time. I LOVE this and can tell by the smile on her face when I plop down beside her and say "Let's have some girl talk!" that it means a lot to her and I might just make it through her teen years 🙂

The picture of them both leaning over… took my breath away. Such a beautiful picture of what having a sister is all about! My girls are 4 years apart and I love the moments when big sister takes little one under her wing!
Ps – check out dollar shave club. They have great deals on razors!

My 10 year old is dying to as well.. and she does have extremely hairy yet very blonde hair and I said no, but reading this maybe if it bothers her as much as she said, maybe it's time 😂

You are the cutest mom. Where did you get your bathroom vanity?

OMG. I remember shaving my legs for the first time without telling my mom and ending up just like Grace.

My daughter has super hairy legs. She's been asking to shaving her legs for a year, and I gave in this year when the boys started teasing her (she's 10). But I haven't let her use a real razor yet– she uses an electric razor. For now, she's happy with that. 🙂

When I was ten, another girl at school said I was a gorilla because I didn't shave my legs or pluck my eyebrows. It is one of the few things I can remember that vividly from being that age. Now I rarely shave my legs and although I pluck my eyebrows, I'm much less bothered about it if I don't have time for a few days. It's so hard to know how to talk to kids about stuff like this – I don't want my children believing that they HAVE to remove their hair/wear makeup/dress a certain way to be valuable and acceptable, but equally it can really hurt when other kids single you out for being different in some way. Tricky to navigate. It's definitely best to teach children how to do things safely if they're going to do them anyway!

I had really hairy legs (still do), and very dark hair, at that! The rule in our family was that you could start shaving and wearing makeup at age 12, and I begged my mom to make a special exception for me. She let me start shaving on my 11th birthday, and I couldn't have been happier. My favorite birthday present for my 11th birthday was a set of razors, and I have fond memories of shaving my legs in the kitchen sink! 🙂

I was looking to see if you had an Instagram account and I saw a picture of Elle and Grace. It was an old picture and when I looked into it it looks like someone set up a fake account with stolen pictures of the two of them with fake names of Rylee and Maria. I have reported the account as fake, but you may want to as well. Thought you should know. I've been following your blog for a couple years and just love your family and your sweet girls!

Hi Jessica, thank you for pointing that out. We have seen that and reported it as well…years ago…wondering why it is still there. Not sure how that reporting business works. But thank you for the heads up.
xoxo