August 18, 2016
I’m trying to do a “Missionary Monday” every now and then, but I don’t think I’ve ever actually written them on a Monday.  Ha!  I just want to label them this way so they are easy to find in the future. 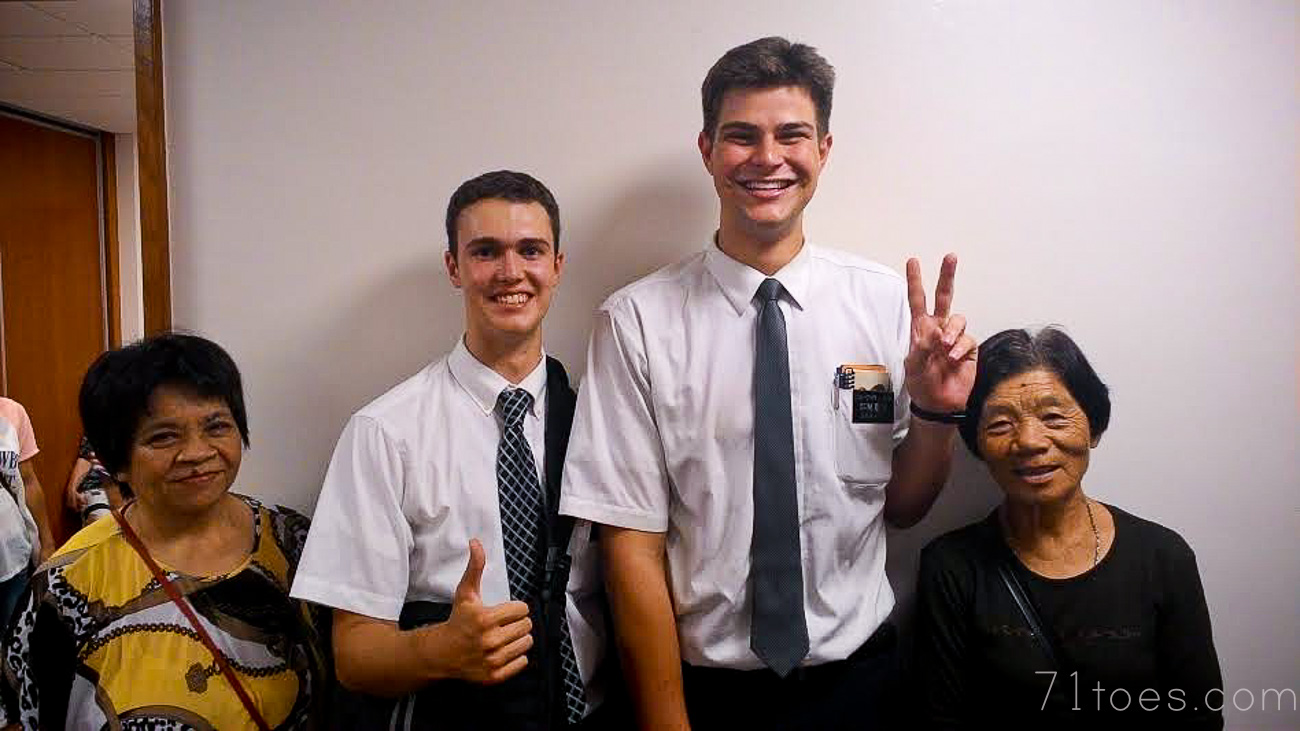 On Sunday we attended two missionary “homecomings” (where the recently returned missionary speaks in church), and two farewells (where the missionaries leaving speak in church…Max’s is back HERE).  It seems like we are now going to those every Sunday.

Remember when I wrote about the “season” of mission calls among Max’s friends (back here)?  Well now that “season” has rippled right on over to Elle’s friends and it’s one more thing that’s kinda like Groundhog Day.  I can’t believe some of those boys have been out for over a year now.  How did that happen so quick??
Yet in some ways it seems like Max’s seven months have been an eternity.
Man alive those homecomings and farewells sure make us miss that Max of ours around here.
Homecomings especially make my girls all whiney.  “Why can’t Max come home now??” they wail.
And then they see pictures of him or he says something funny and quite honestly sometimes those little sisters of his start to cry from the missing.
But at the same time as the missing wrings our hearts up tight, the letters and pictures soften everything and make us fall in love with that kid more than ever.
The greatest thing that has happened lately?  I’ll tell you:
VOICE MEMOS.
Oh boy, I’d like to give a big giant hug to the blog reader who suggested sending Max on his mission with a digital voice recorder (the one she recommended that Max has is here: http://amzn.to/2b1JBF5 ) because right now those things are like mana to our family.  The first week he started to use it we got an email with SEVEN attachments of voice memos.  He had made one for us at the end of each day that week.

The next week we got four.
And the last two weeks we only got one.
But we’ll take it!  It is the best thing ever to hear his voice (which has gained a kind of funny accent at this point), to hear him laugh, to hear his companion pipe in here and there, to hear SO much more detail of what’s been going on. 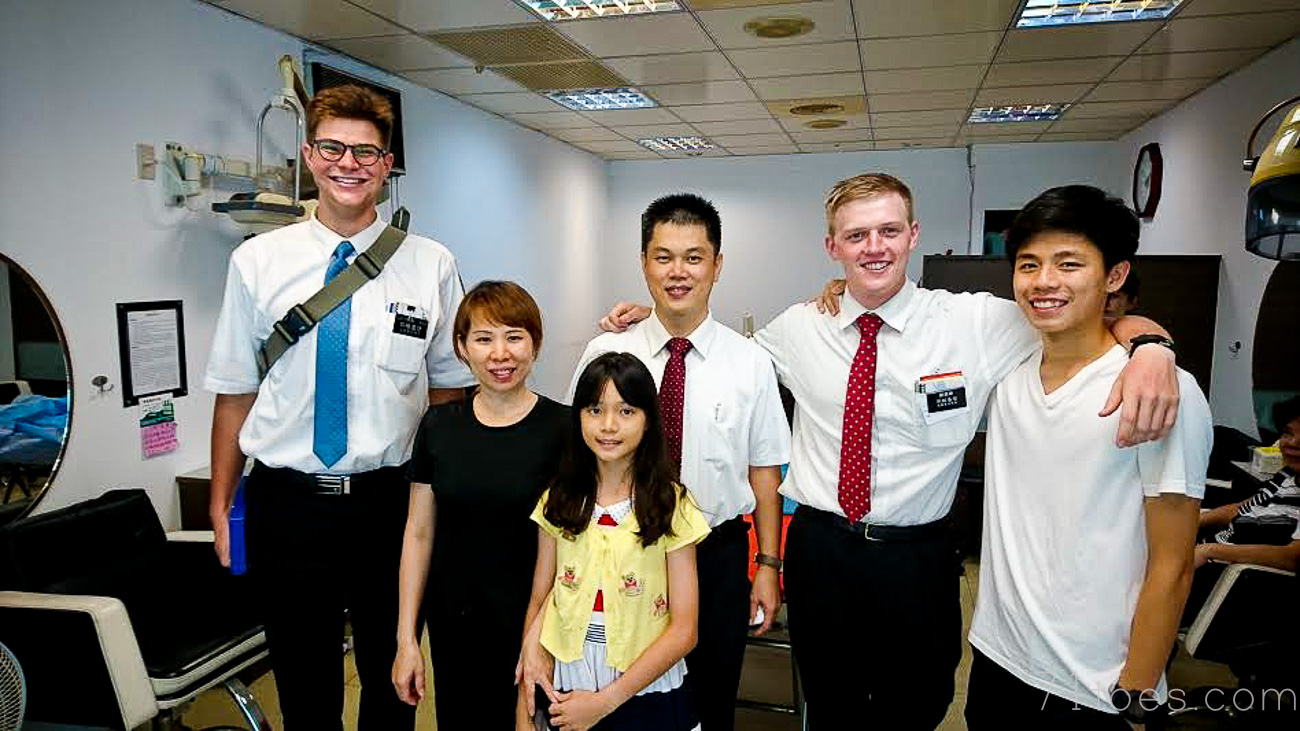 I have two favorite voice memos so far.  The first one is just like ten minutes of straight Chinese.

I’ve been trying to figure out how the heck to attach that puppy here but I can’t figure it out for the life of me so I’ll have to come back when I figure it out because I loved it and it is so fun to listen to.

And the second favorite is the day he thought he was going to get transferred and was so worried about how to say goodbye to the people he has grown to love so much.  It was so great to hear him talk to his companion and roommates trying to figure out how to get around to everyone.

Then he ended up staying.  Ha!  But I loved the love that came through so clearly in his voice as he thought he had to leave those people he obviously adores.

Just a re-cap so far.  Each “transfer” is six weeks.  Usually missionaries stay with their trainers for two transfers, so Max was with his trainer Elder Porter for twelve weeks.

Then he stayed in the same area and got a new companion.  So although the new companion had been on a mission a lot longer, I’m sure Max was the one who had to show him around a bit. 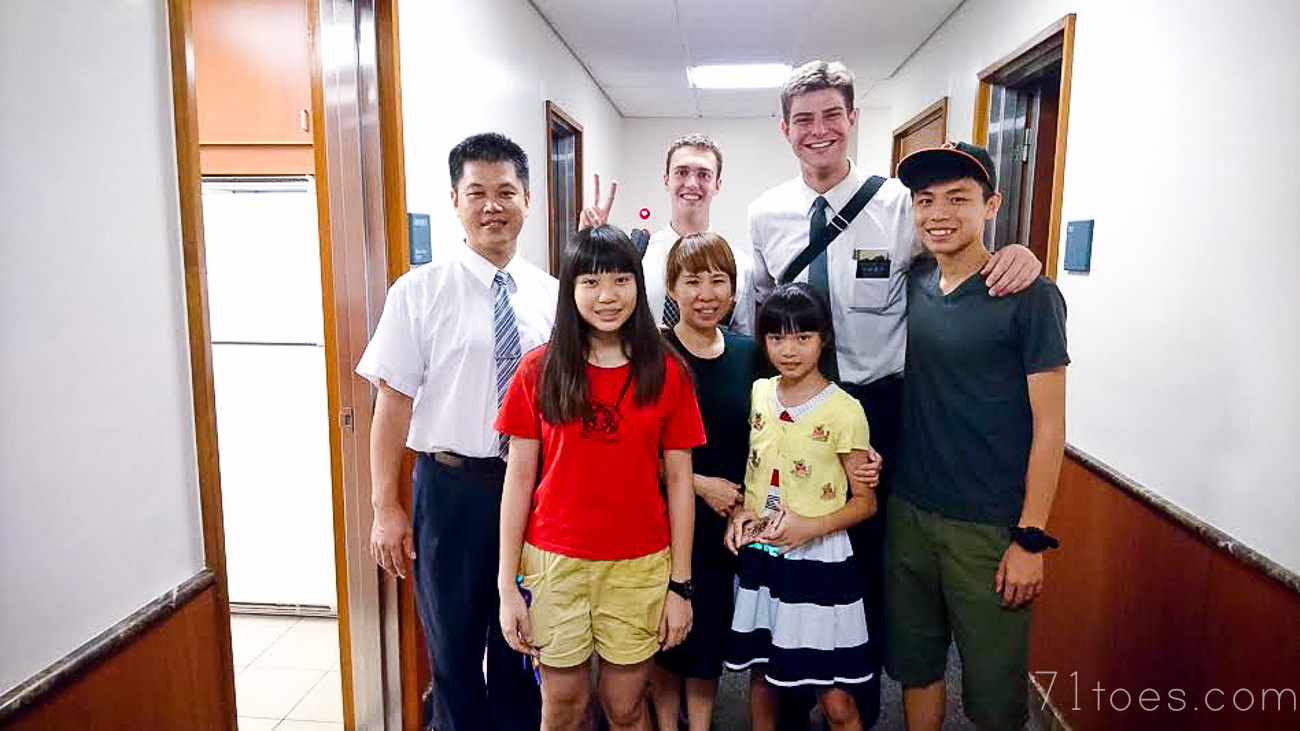 He was with that companion for six weeks, and totally thought he would be transferred (you usually don’t stay in one area too long), but the assignments came out that he would be staying with that same companion another transfer in the same area. 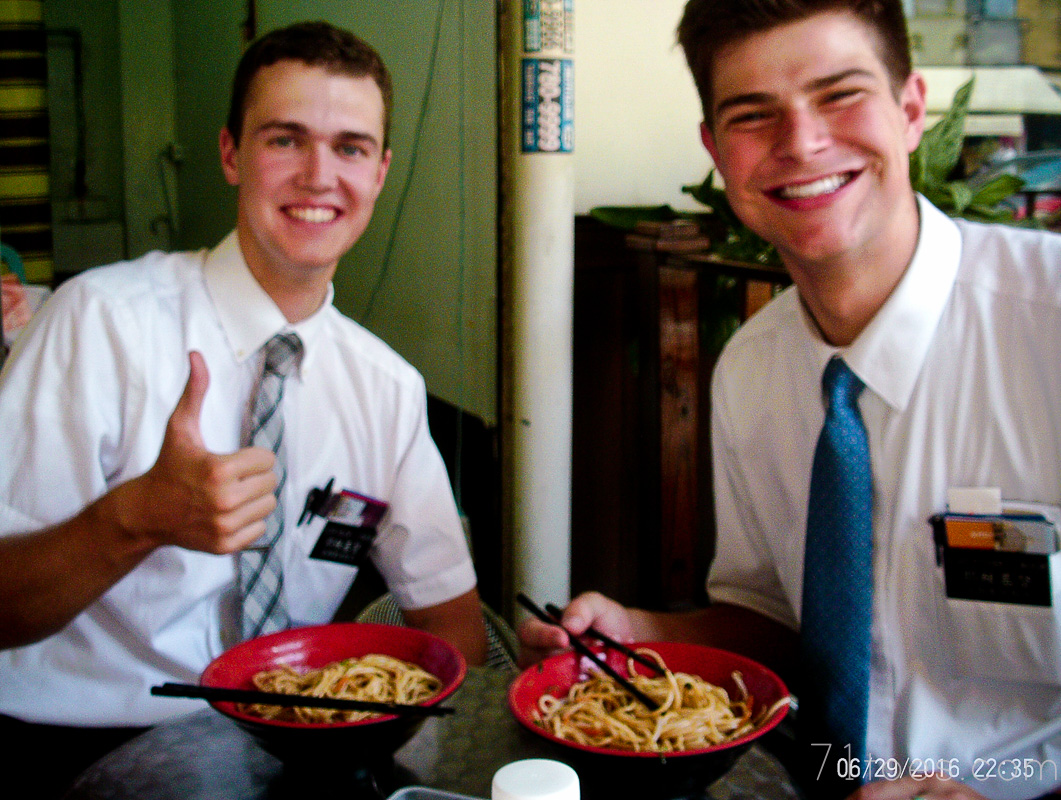 So, he’s been in his very first area in Taiwan for nearly twenty weeks.  That’s a long time!  And he is OVER THE MOON about it.

He has four more to go (at least) and he is absolutely in LOVE with it.  Last transfer he and his companion didn’t have much success finding people to teach and I think it must have been a little frustrating (although you’d never know from his letters…Dave and I just know because we’ve been there and done that).  But suddenly they have started finding so many people who are so excited to learn more about Jesus Christ and want to be taught.  So they are kind of on fire as a companionship and as friends.  So fun to hear.

I have become friends with both his first companions mothers through the internet so I was able to “get to know” them and their sons through their letters they would forward, but so far I’m not in touch with this one…I need to find her 🙂 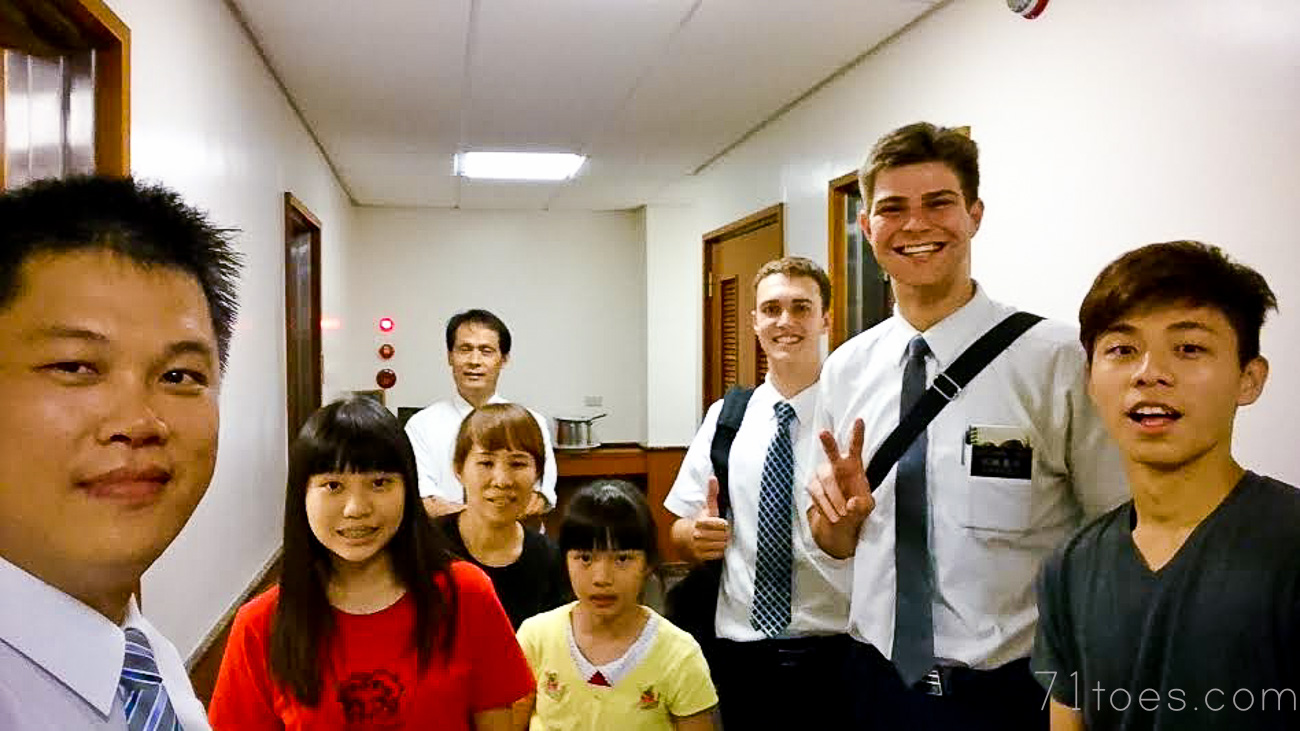 I will put some clips of Max’s letters in here at some point when I can get them all sorted out from voice memos.  He has some great thoughts.  For now I’ll just end with a little back-and-forth between Lucy and Max because I love those two and their relationship.  Max challenged Lucy to a sugar deal while we were at Bear Lake (we do that every now and then), and I loved how seriously she took him.  She decided she wanted to do it when we got home because it was too hard to do during the summer.  So in this exchange she was trying to figure out the “rules.”


Dear elder Pothier, this is Lucy. What’s your favorite food? How is is your companion? Is it still rainy there? Do you like to use an umbrella or a raincoat?  Will you send us a picture of your apartment? I want to see where you sleep? What are you mostly eating there?


I memorized helaman 5:12 this week and I went to a play. It was supposed to be bandito but when it started they said “welcome to hairspray!!” And it was the wrong play!!!!


I swam around the raft 23 times and I’m trying to make good decisions on sugar. Can we do a contest instead of just not eating sugar because then it will be more fun. Like having a contest like if someone eats sugar then they lose?
Answer my questions I love you. 🍪😄

Lucy! My fav food is dumplings! My companion is awesome! It was really hot this week! I use a raincoat! I think I already sent a pic of the apartment. I will send you a picture of my bed soon. I mostly eat yummy rice or noodles or dumplings or something!
I love Helaman 5:12! And I love Bandito! Tell me all about it! Love you! Keep being a good girl and learn to ski this year!

I don’t know the background on any of these pictures included in this post…I think maybe English class on most of them??  I can guess though that the “peace” sign is what you do when you take pictures 🙂  I just love seeing that tall happy face sticking up there at the top of each one.  Missions are the best.

the end and the beginning

Max coming at you in Chinese

resilience and mission comings and goings

inspiration and love from the heart of Texas

a very happy reunion with our missionary Grace...

I love this…what an amazing 2 years. As much as you miss him I know there is no place better!!

Melts my momma heart. Look at his smile.

Oh my gosh, the letters between Max and Lucy made my heart swell and my eyes teary.

Hi Shauni, it was me who recommended the voice recorder. Isn't it just the best ever?? Make sure you order one for your family so you can also send Max voice recordings as well. Especially of all those homecomings and farewells you are going to.

Here's my next tip. Download the pixingo app. You create cards on the app using pictures you have on your phone. You upload the pic and write out a little message and push submit. Then pixingo prints it up and mails it to your missionary. Real envelope, stamp etc. You pay the postage and a very nominal fee for the card. I have no connection with this company but I love this app. Takes me, or one of my kids five minutes or less to get s card in the mail
To my elder. And he LOVES receiving them. My little people, 16,9&7, send their brother at least one card per week. Check it out.

BTW, my 16 yo is best friends with Lexie Zaharis. Small world.

Love this! We used to do tape recordings to send back and forth! This is soooo much better! Love that Lu! And that Max!

That looks like Elder Melior in the top picture! His parents live down the road from me. Top notch kid. Glad Max is doing so well!

So glad that Max is doing well! I am a missionary mom too – my son is in Mexico and comes home next month!! Wow – the two years really does go quickly. Missions are so awesome! Thanks for sharing!

If you're trying to BUY bitcoins online, Paxful is the #1 source for bitcoins as it allows buying bitcoins by 100's of different payment methods, such as MoneyGram, Western Union, PayPal, Credit Cards and they even allow converting your gift cards for bitcoins.