September 14, 2016
Well, it looks like we just continue to diversify our sports around here.
We fell head-over-heels in love with volleyball with Max.  And tennis has always had our hearts.  Now we’re diving into cheer with Grace and on to some serious soccer with Claire.
I haven’t talked about the soccer dealio much and since it has officially taken over our lives lately I feel it is appropriate to document right here right now.
Claire has always loved soccer.  We saw her determination kicking that ball around clear back here: 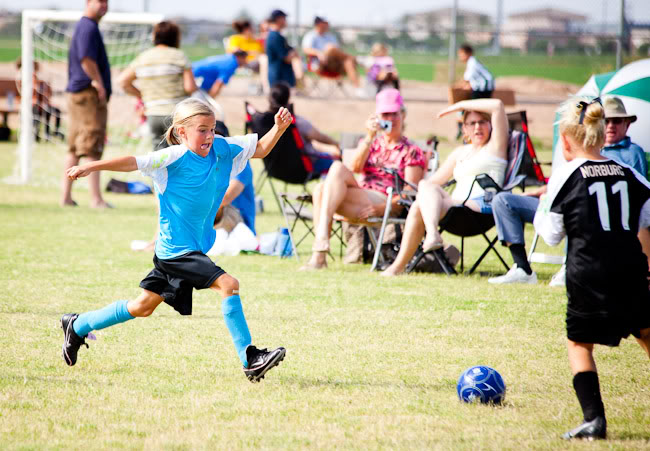 (more pictures showing off her competitive edge back HERE.)

She’s played on and off through the years but this year she got serious.

Serious in that she tried out for her first club team in the spring, and thought she had died and gone to heaven when she made the “A” team. 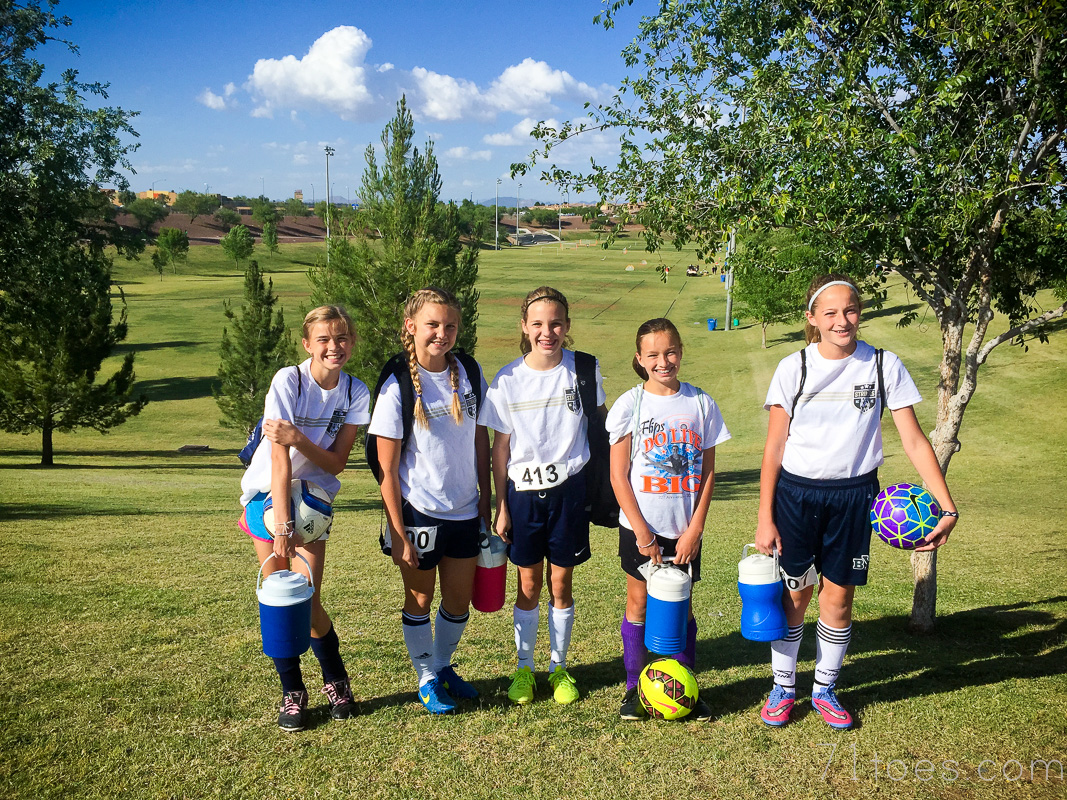 She had a few summer practices… 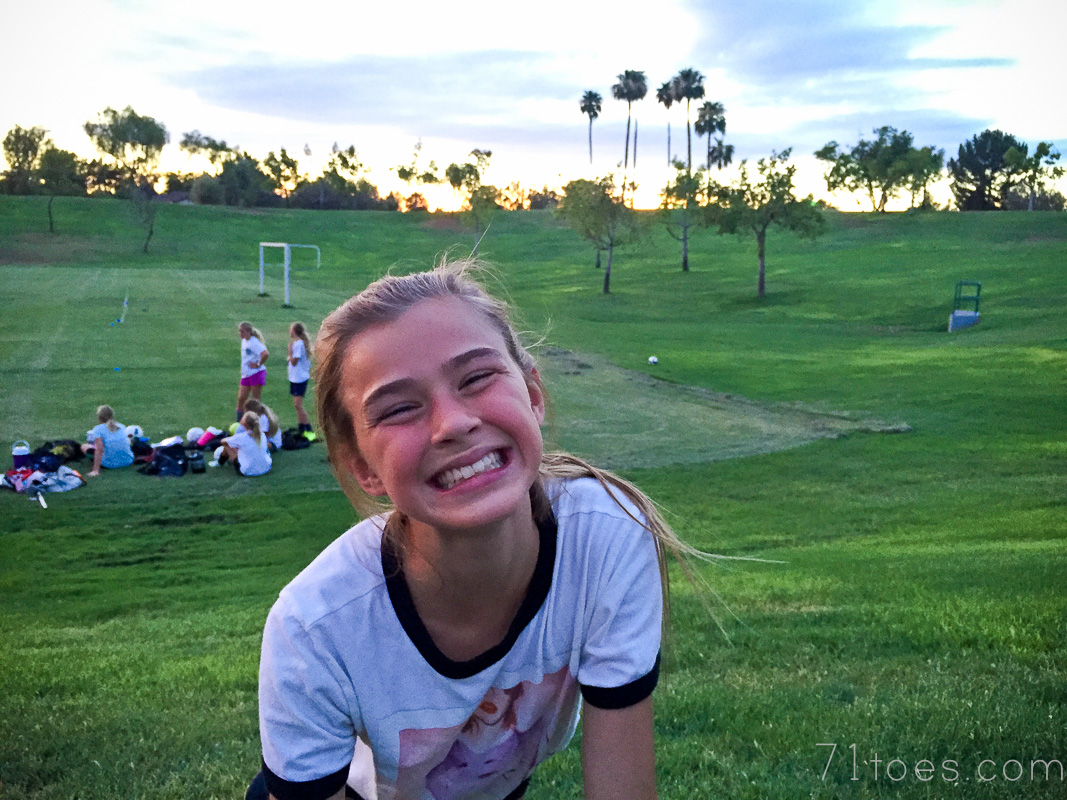 …but the big deal stuff didn’t come until the school year started.

Lots of club practices each week.

And of course Claire felt that she must try out.

So she did.  And on one of the try-out days where she went directly from tryouts to club and honestly played soccer for close to five hours straight I found her between practices like this: 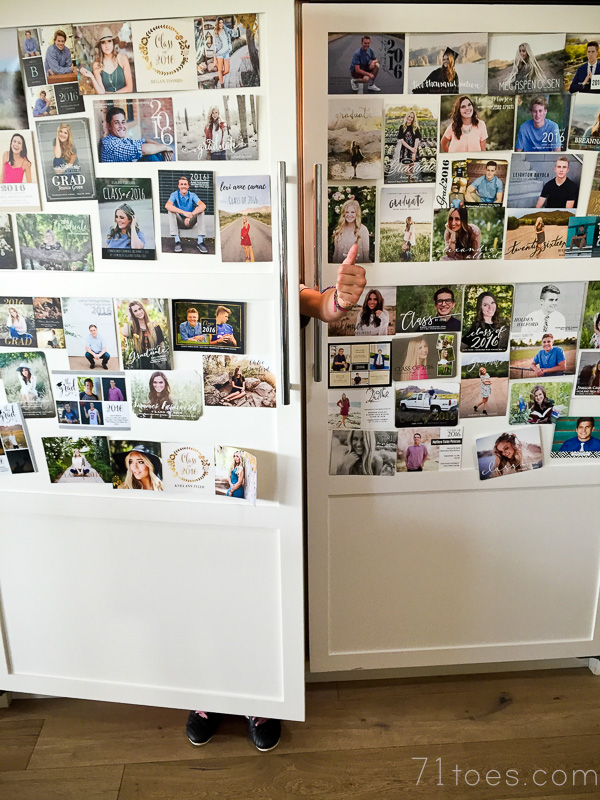 Good idea I must say.

These girls were so excited that they made the team:

And these two plus one more have had no complaints going from one practice to another over and over again. 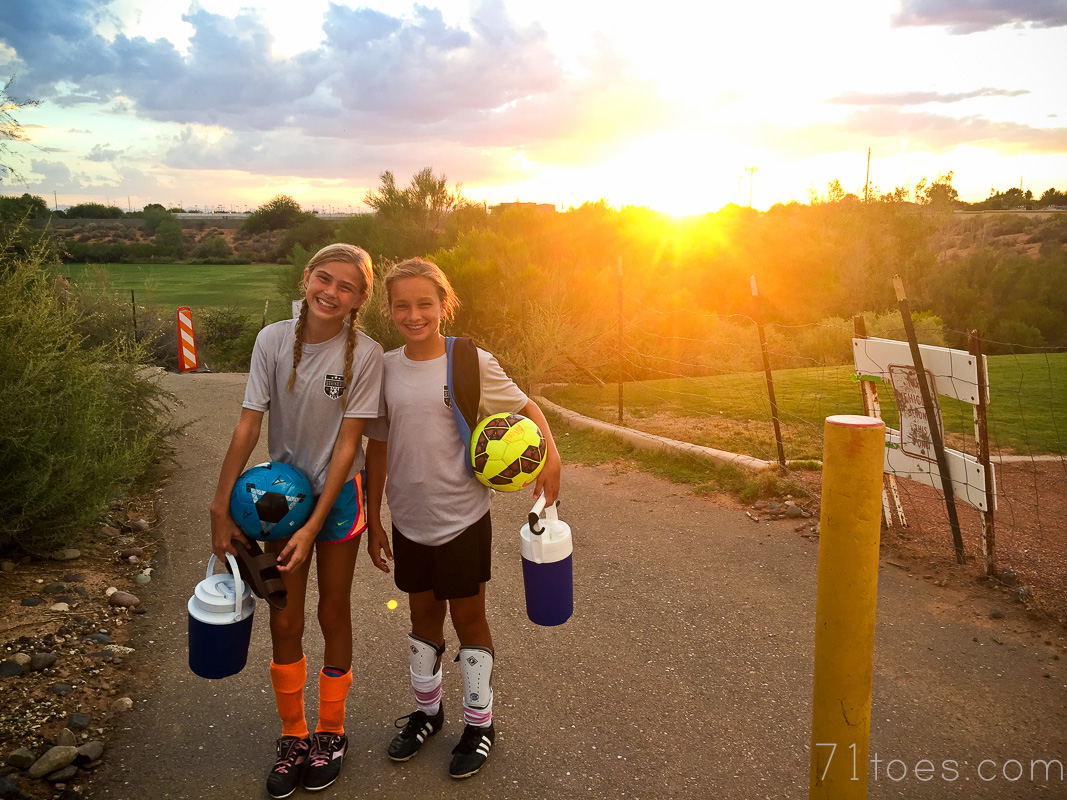 They have clocked in more hours of soccer than I can count.

Grace was talking one day a while back about how cool it would be if we could have a record of everything we’ve done in life.  How many hugs we’ve given, how many scrapes we’ve had, how many bedtime stories we’ve read, how many tests we’ve aced.  That would be pretty cool right?

I’m pretty sure if we had a record of how many hours of soccer have been played so far this year it would be a hefty number.

First school game was a couple weeks ago. 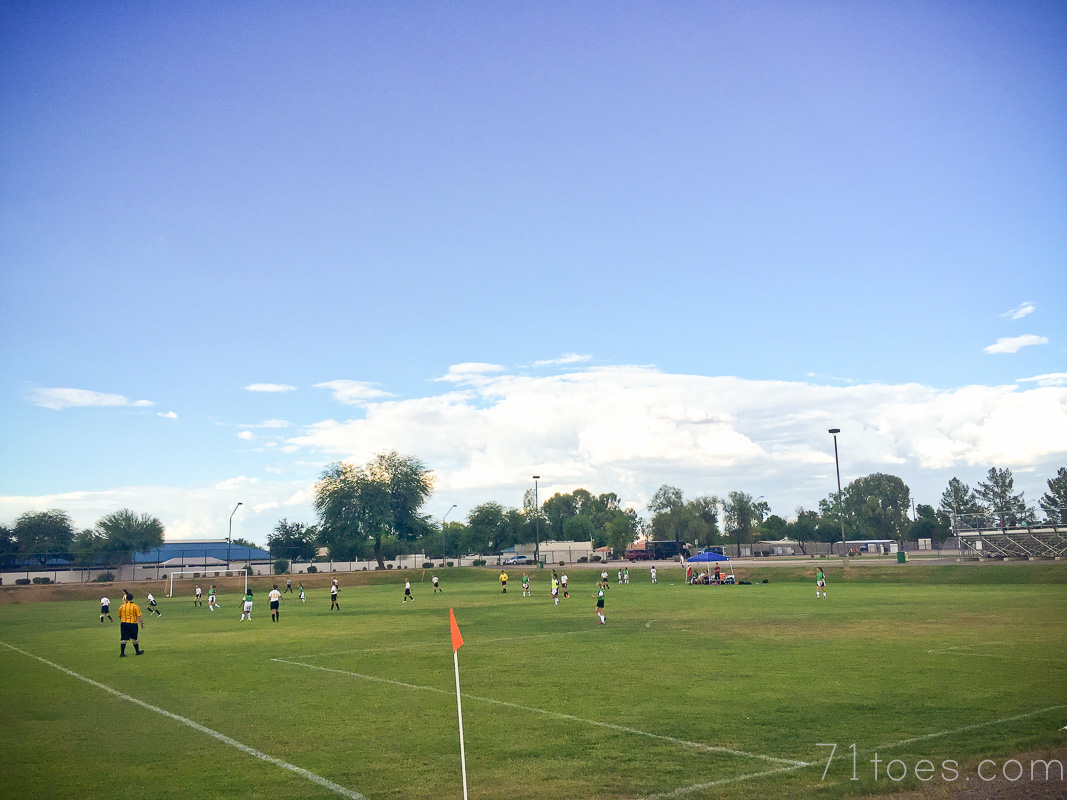 You can’t tell in this picture but those faces were red-hot after that game. 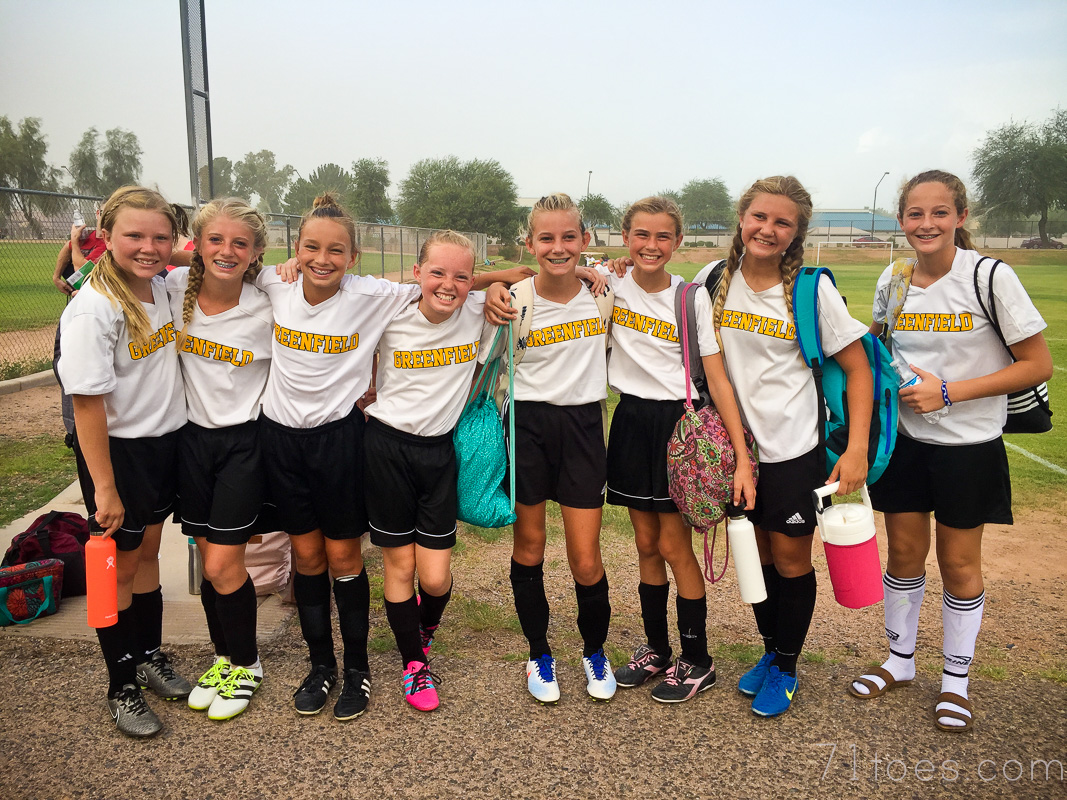 It’s monsoon season here which means humidity galore matching the over 100 degree temps and we were burning up on the sidelines at this game.

That would be pure misery for me running out on that field but this is how this girl felt about it: 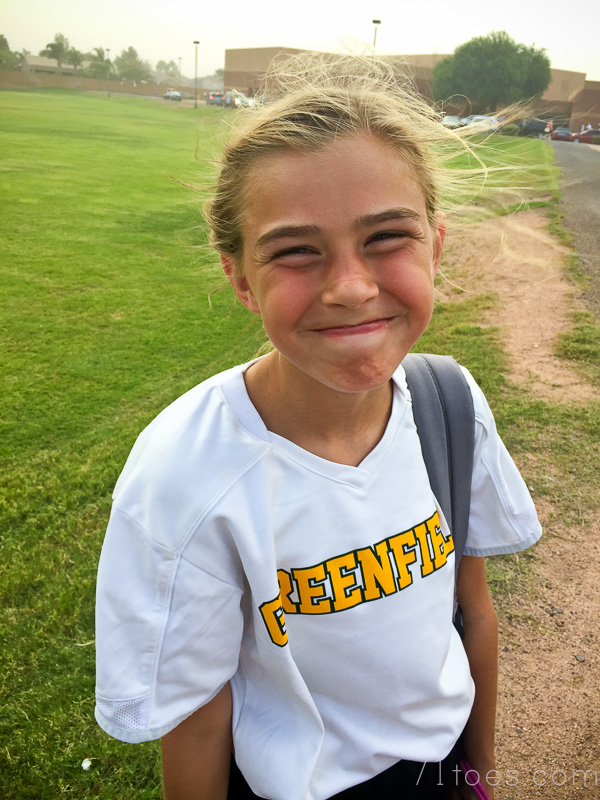 Not so hot after the next game when they came away with a loss: 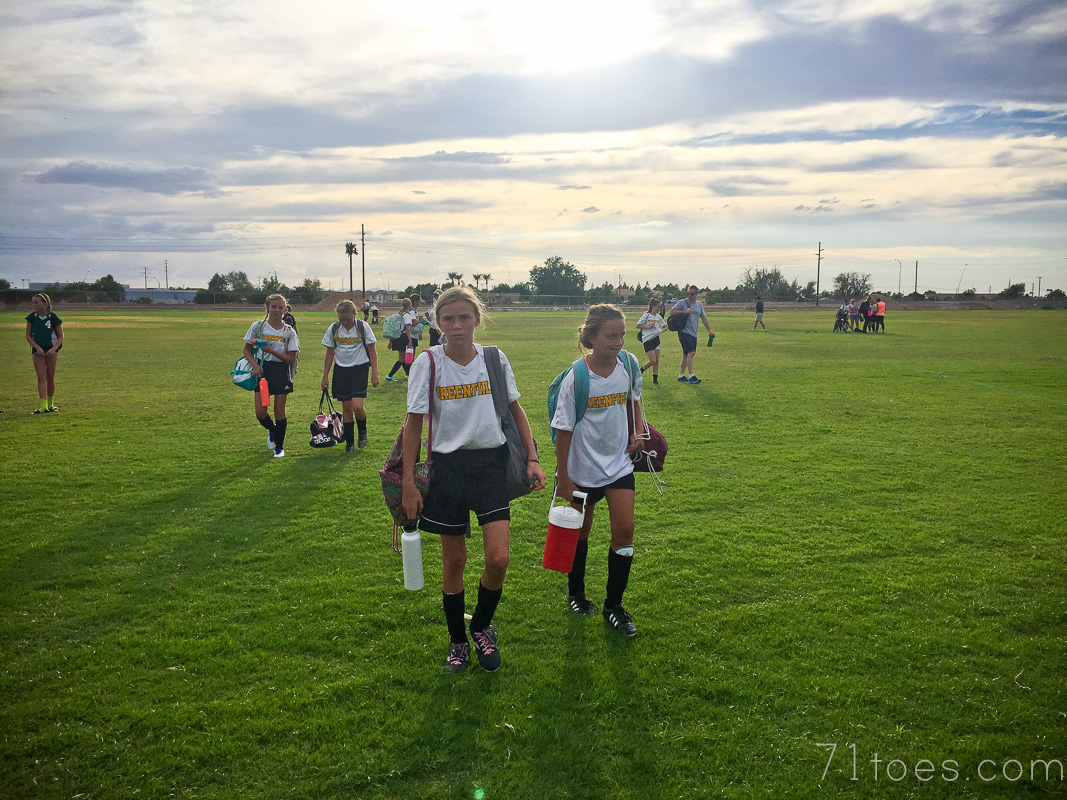 Ha!
First club game is this weekend.
So much for the long-lost days of summer and no carpools!  (Grace’s cheer is almost up to full-swing too…more on that hoopla soon.)
But I say bring on the sports, because I’m pretty sure as soon as it starts to cool down a few degrees around here this is going to be fun 🙂
This was the view picking up the soccer girls tonight: 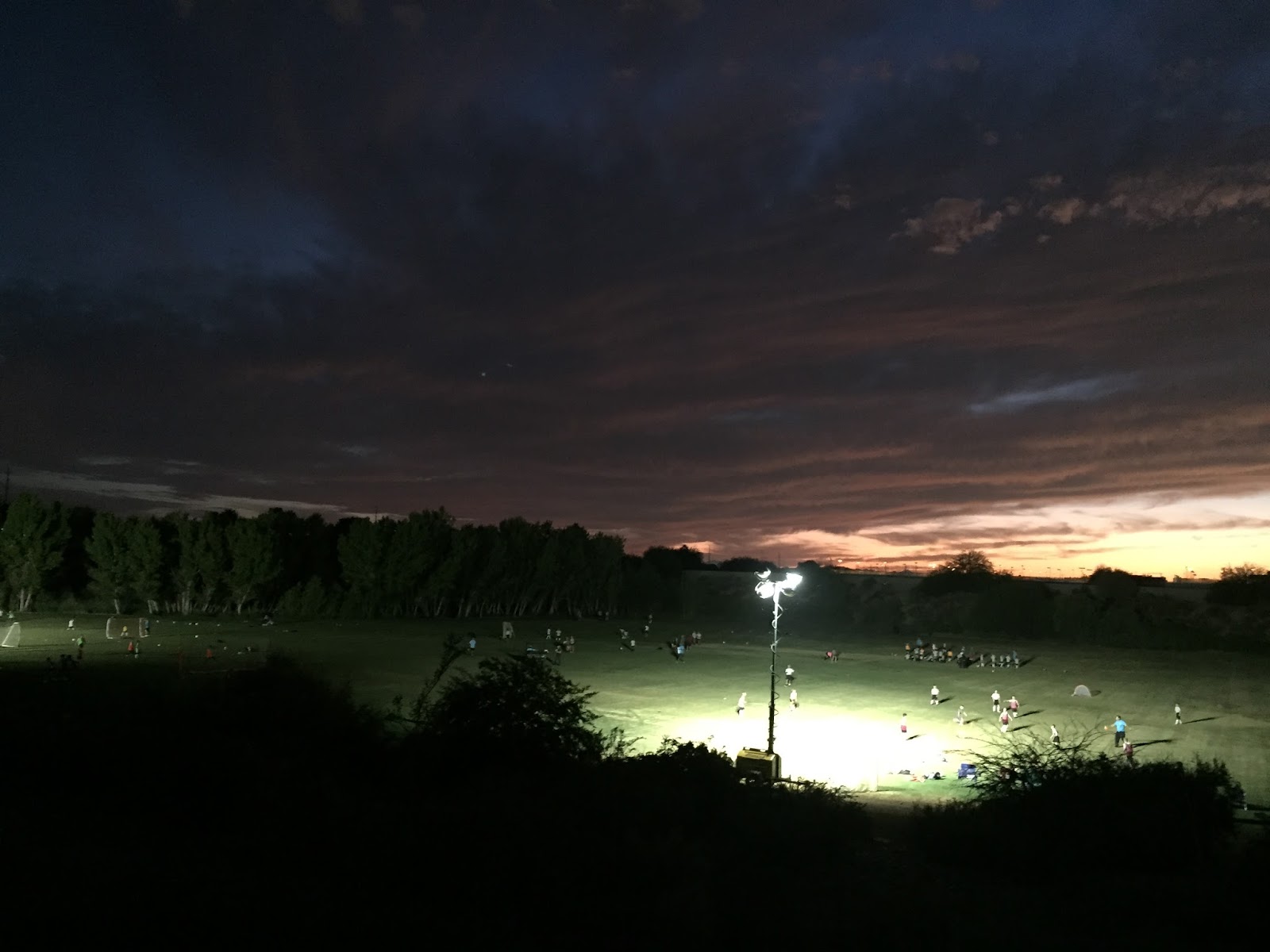 Despite the mosquitoes attacking my legs waiting for the girls (they came up the hill practically running from relentless mosquitoes), I felt a tiny tinge of Fall in the air.
Hallelujah!
5 comments 0 FacebookTwitterPinterestEmail

Labor Day weekend in pictures (and a few words too)

Wish we would have had more time to tlk about this while you were here. I cannot imagine running like that nonstop in that horrendous heat! We were in Detroit today but the weather people said that it was 20 degrees cooler today than it was yesterday. The trees are starting to blaze!

I LOVE your refrigerator! Where did you get it?

I'm so impressed with her willingness to play in that heat! My soccer player would be complaining for sure!! Claire is such a cute girl. I hope she has a great season.

I love seeing how far she has come since those days as a Blue Dolphin! Congratulations Claire! We are so happy for her and all she has accomplished in soccer!

Soccer training is not just about improving your ball skills. Having the soccer fitness to be able to outlast your opponents is the other part of the puzzle. See more here Meir segal soccer training