January 9, 2017
The day before New Years Eve Lucy announced that she just couldn’t wait for our tradition of crepes and “dancing like crazy with light-sticks” at midnight to ring in the new year.

All of us looked at each other in confusion because we had no idea what she was talking about.

When we questioned her further to figure out more details she looked right back at us like we were the crazy ones for not remembering.

I have no idea where that grand plan came from but it was a good one.  We did, at least, incorporate the crepes…but not until the next morning.

Usually when Dave and I are in town we gather all his extended family together and have a big new years bash, but this year nothing sounded better to us than putting our feet up and just hanging.

We played cards with Elle until she had to leave (pretty much a theme throughout the whole break): 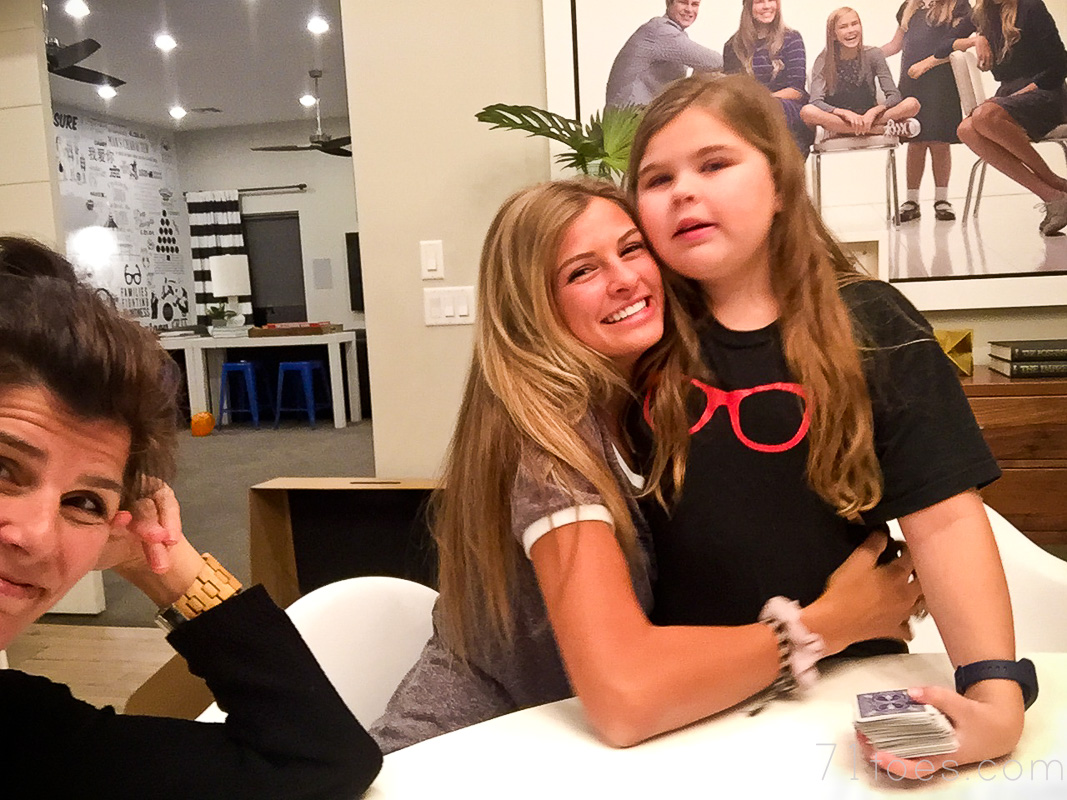 Played a game with friends for a little bit too… 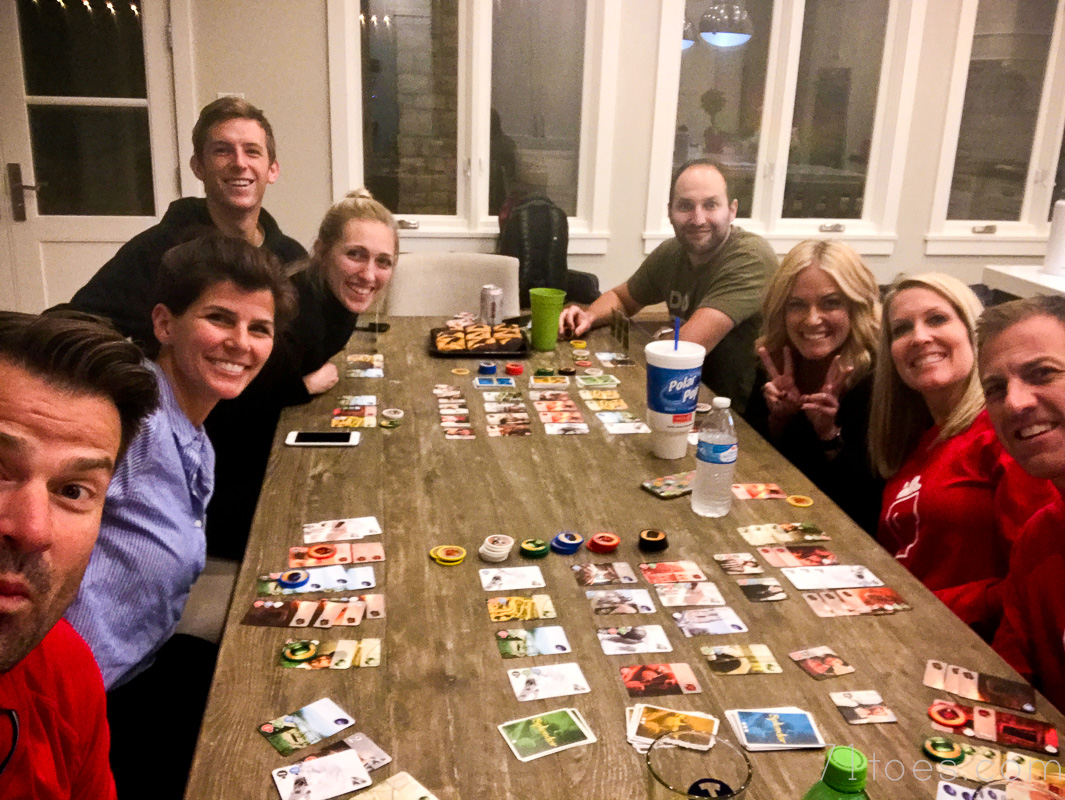 And got back in time for our neighbor’s fireworks: 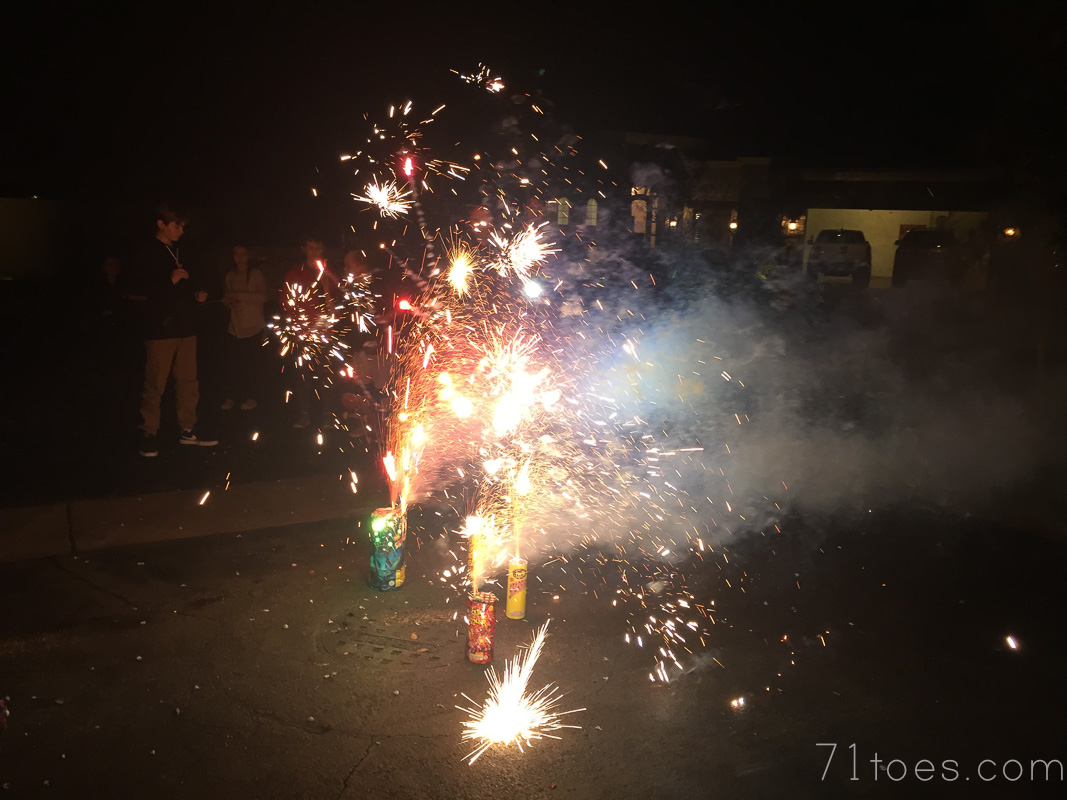 And some pretty excited girls (we had one cousin join us): 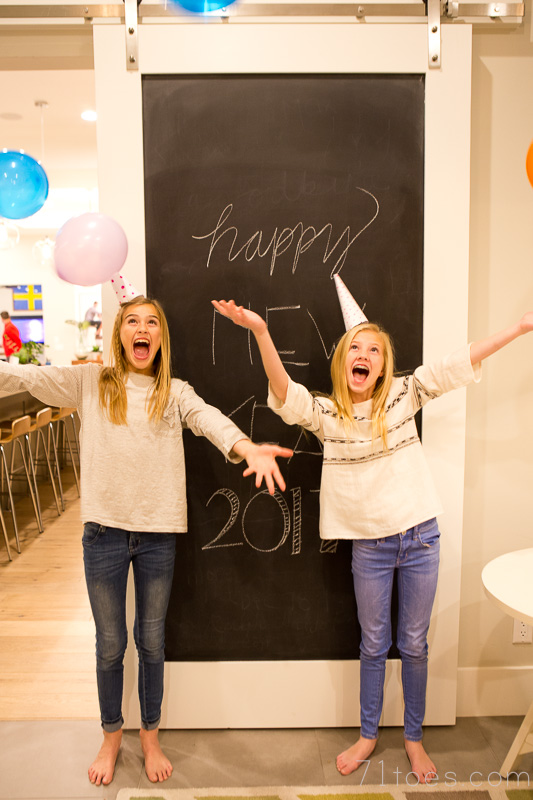 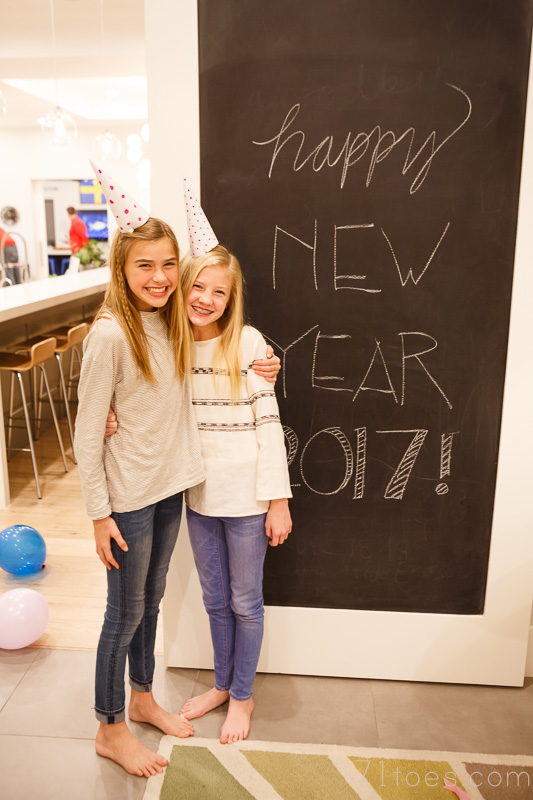 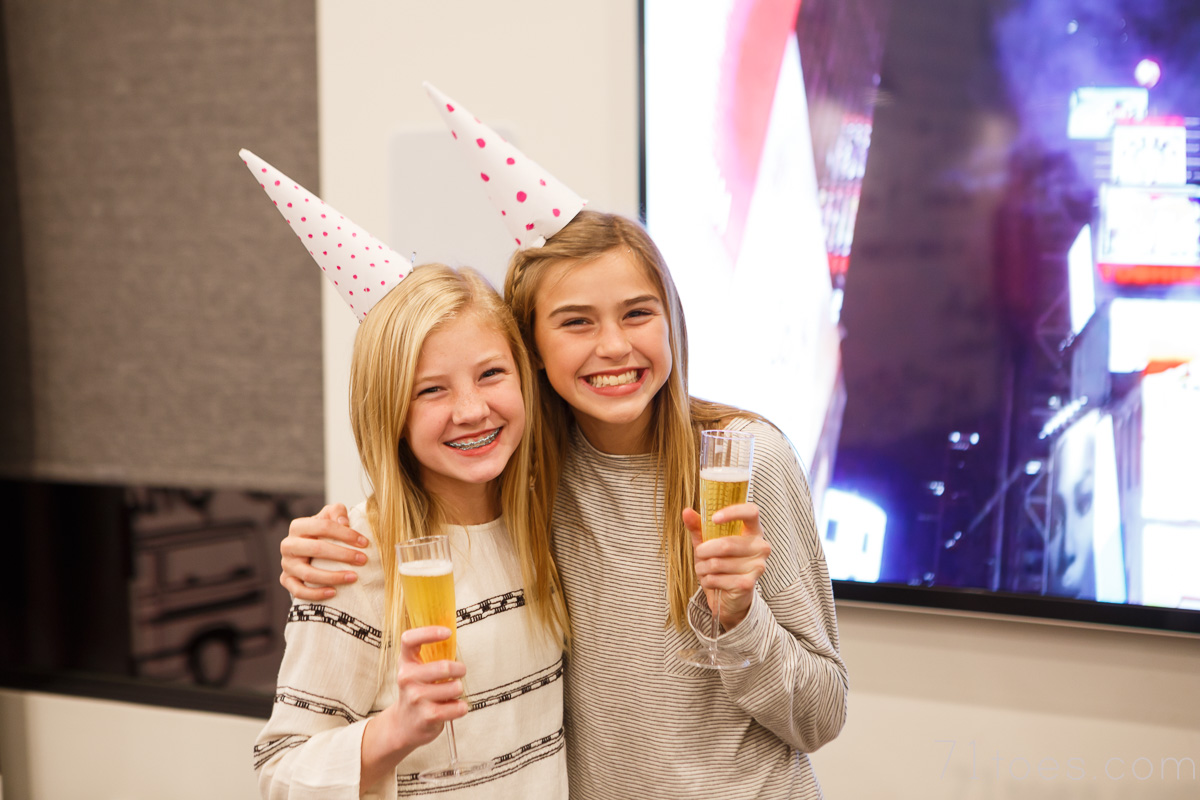 Lucy, after all her excitement for the big night and her enthusiasm that she HAD to stay up until the “real” midnight, decided without question that she HAD to go to bed at 11:57.

Those little eyes of hers were drooping and she could hardly keep herself upright (that girl is not a late-night kind of a gal).

But she made it for the ball-drop.  Check out how excited she was! 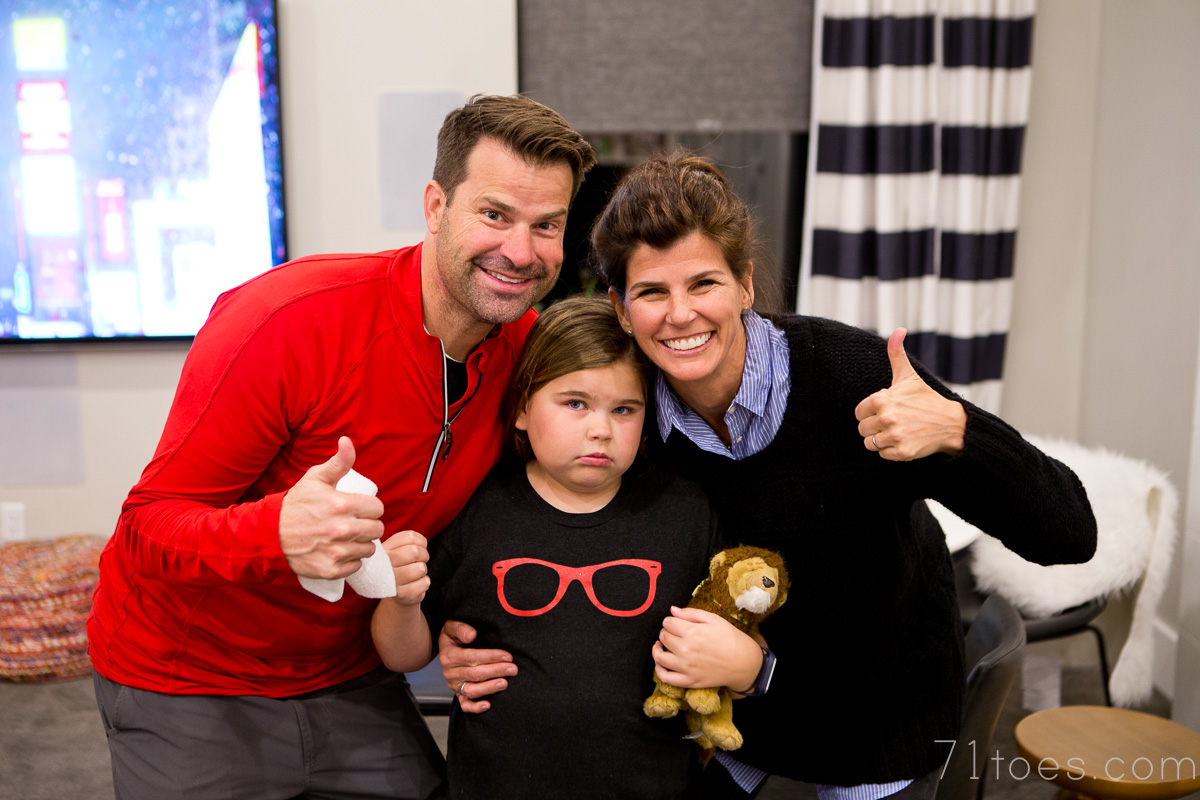 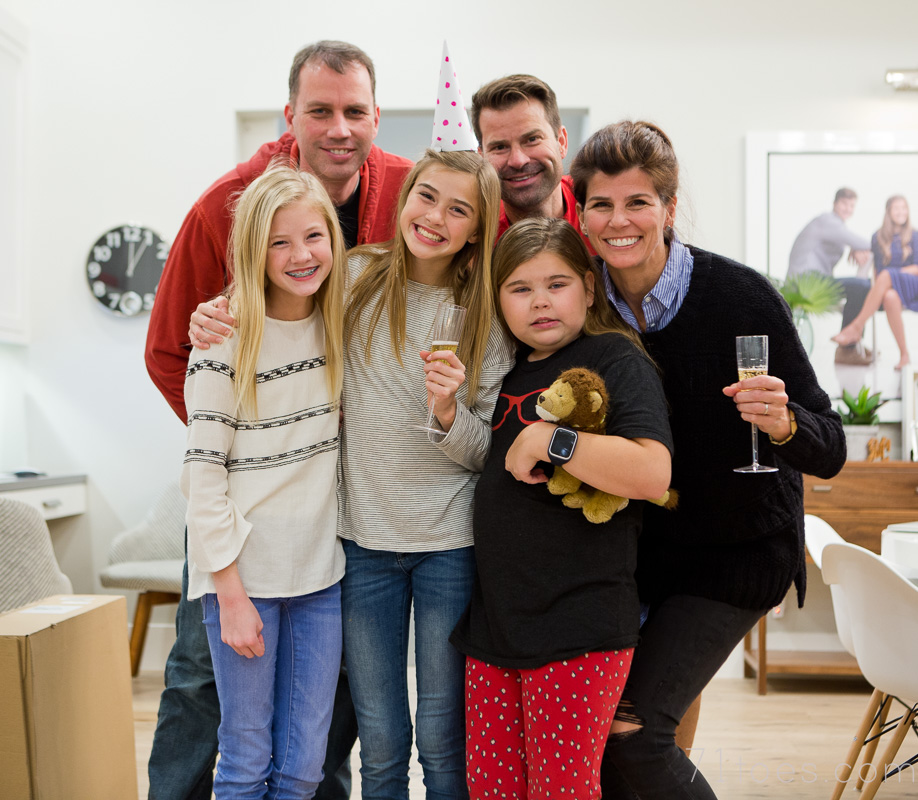 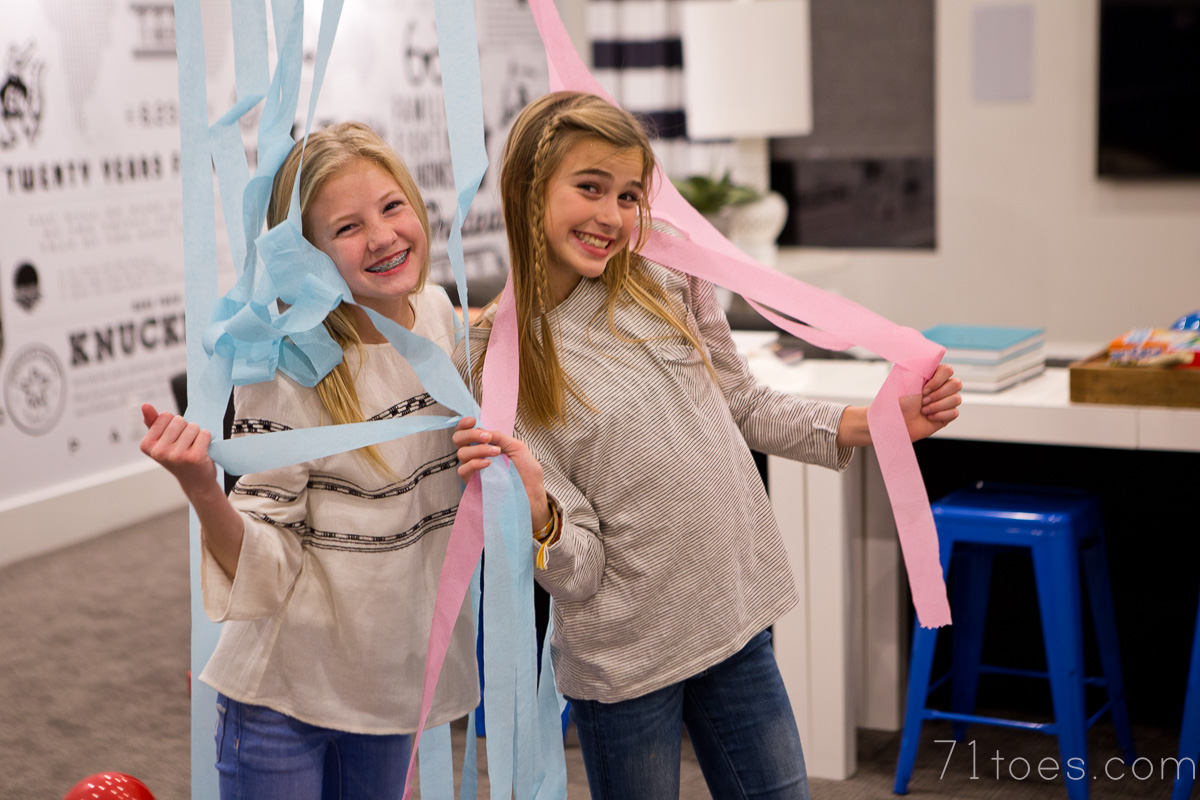 It was a great night.

Grace and Elle came home all smiles as well, but I don’t have any pictures to show for them.

Since the next morning was Sunday, Dave got the girls to work with 2017 bubble maps and had a great little lesson with them about goals and how they get us places. 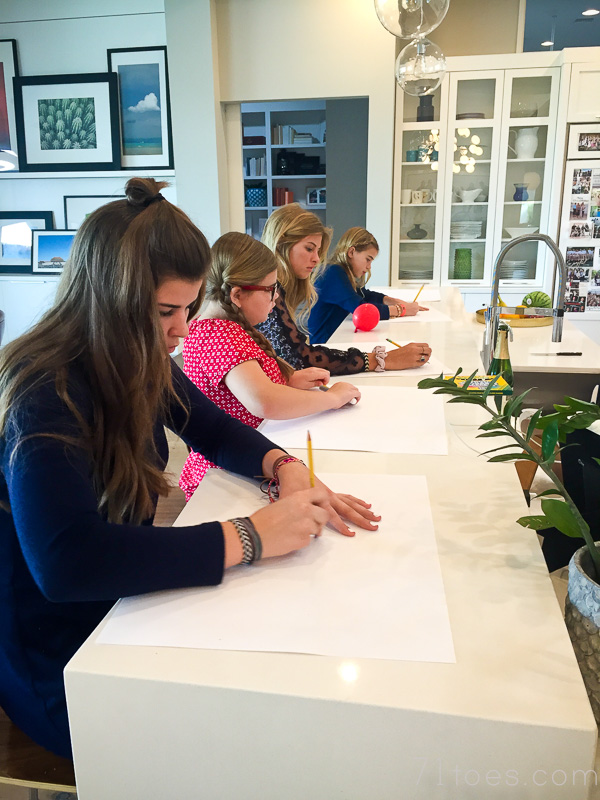 Our church time changed to noon so it was pretty luxurious having the whole morning to hang, have our new traditional crepes (thanks to Lucy), and think about what we want 2017 to look like.

We have a long way to go, but we have been working on at least the physical part of those goals (with everyone else on the planet I’m sure).

Lucy is working in a good exercise routine into her job charts each week. 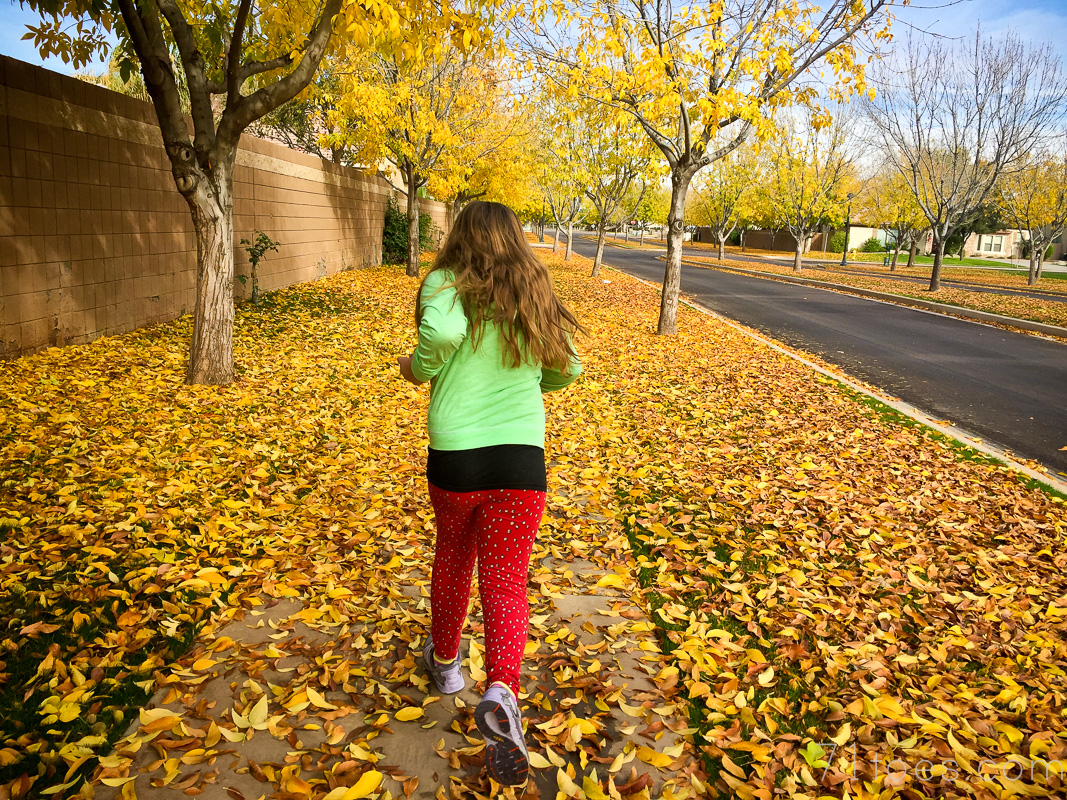 Exercise is pretty awesome in this Fall wonderland our neighborhood has transformed into.

And it’s extra great when you get to exercise in your pj’s, don’t you think? 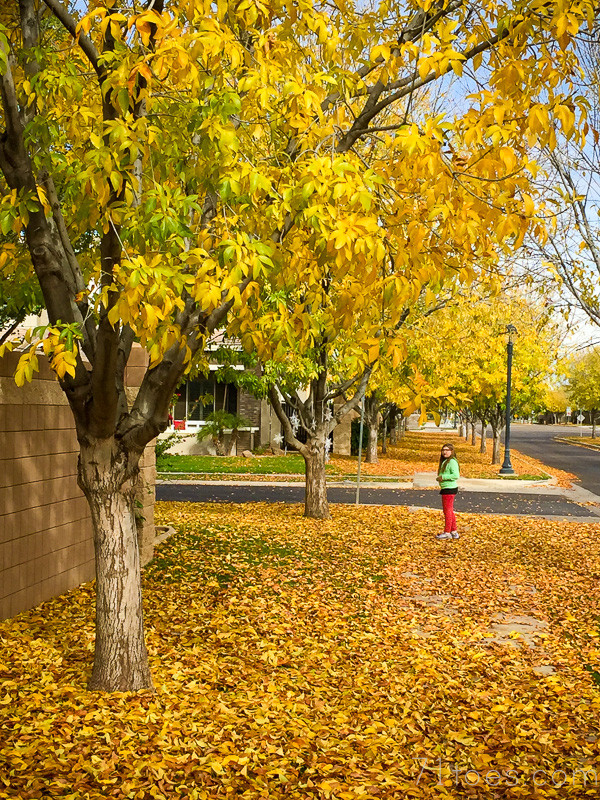 We’ve been putting our new tandem bike to good use: 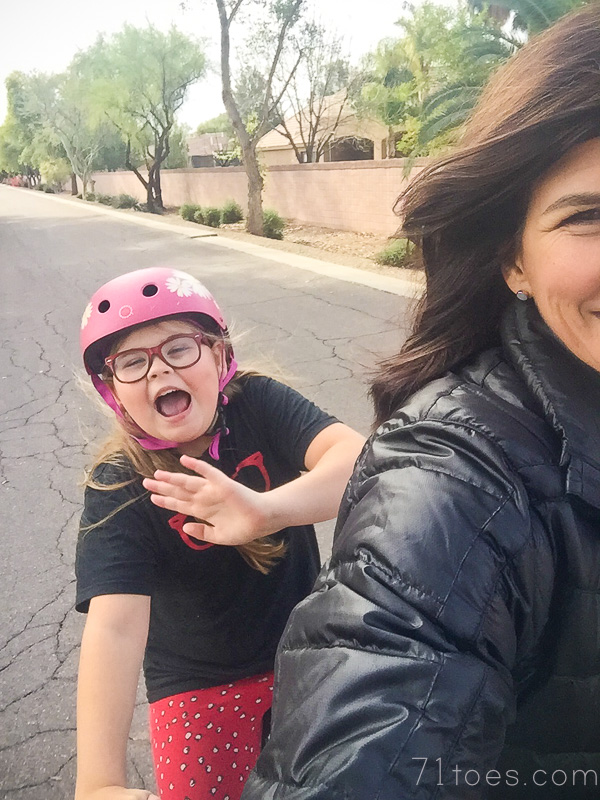 These girls went on a couple runs, and whipped themselves up a pretty delicious smoothie: 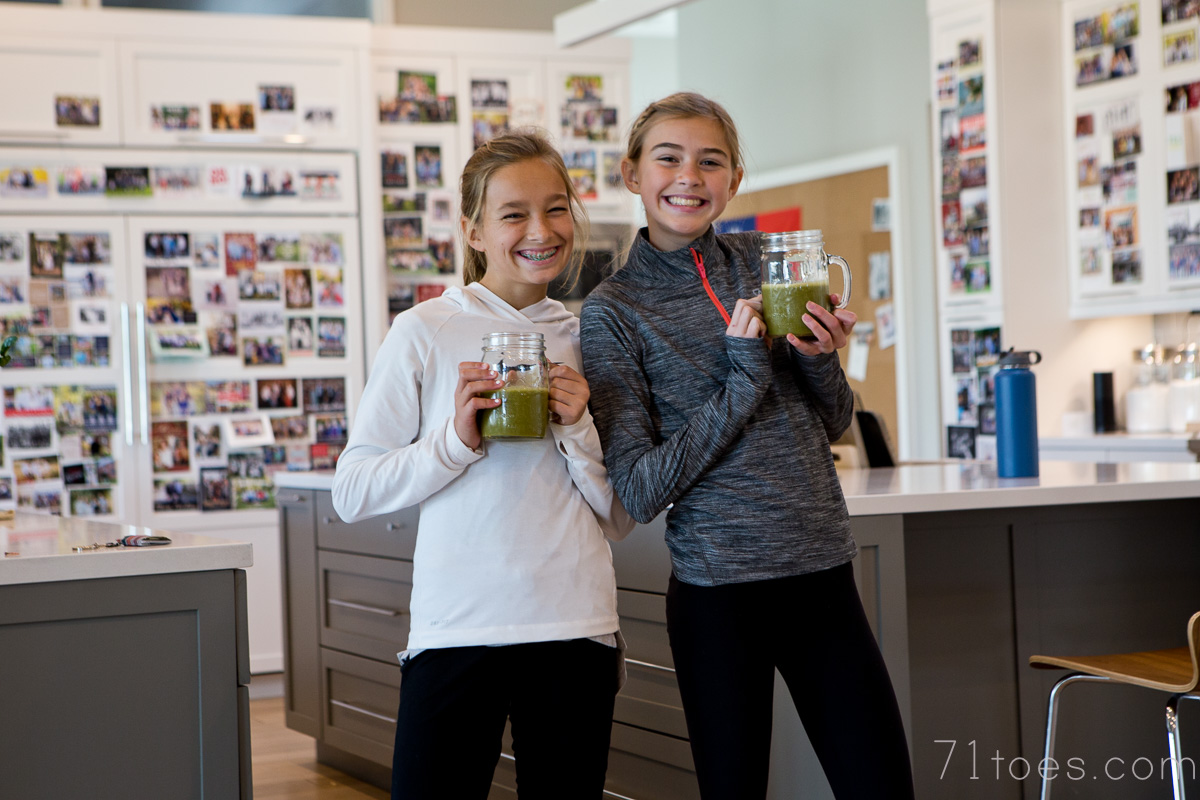 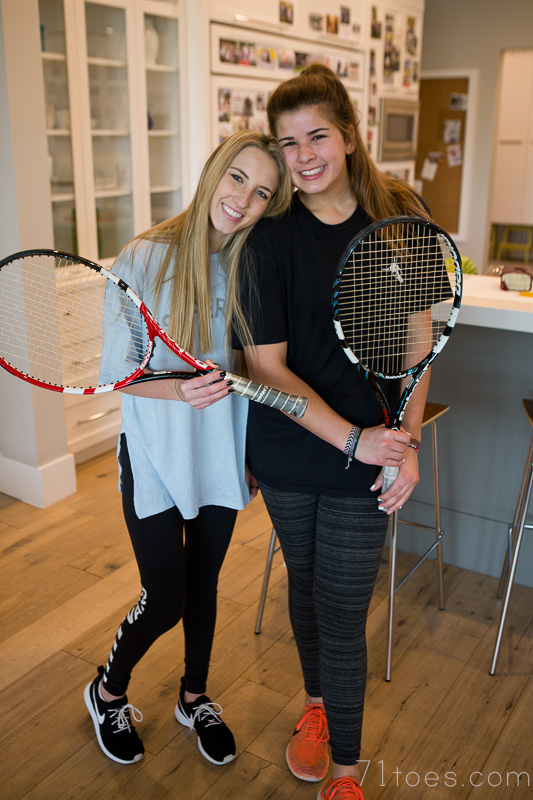 I stole these two away from all their friends to hike one of my favorite mountains one day: 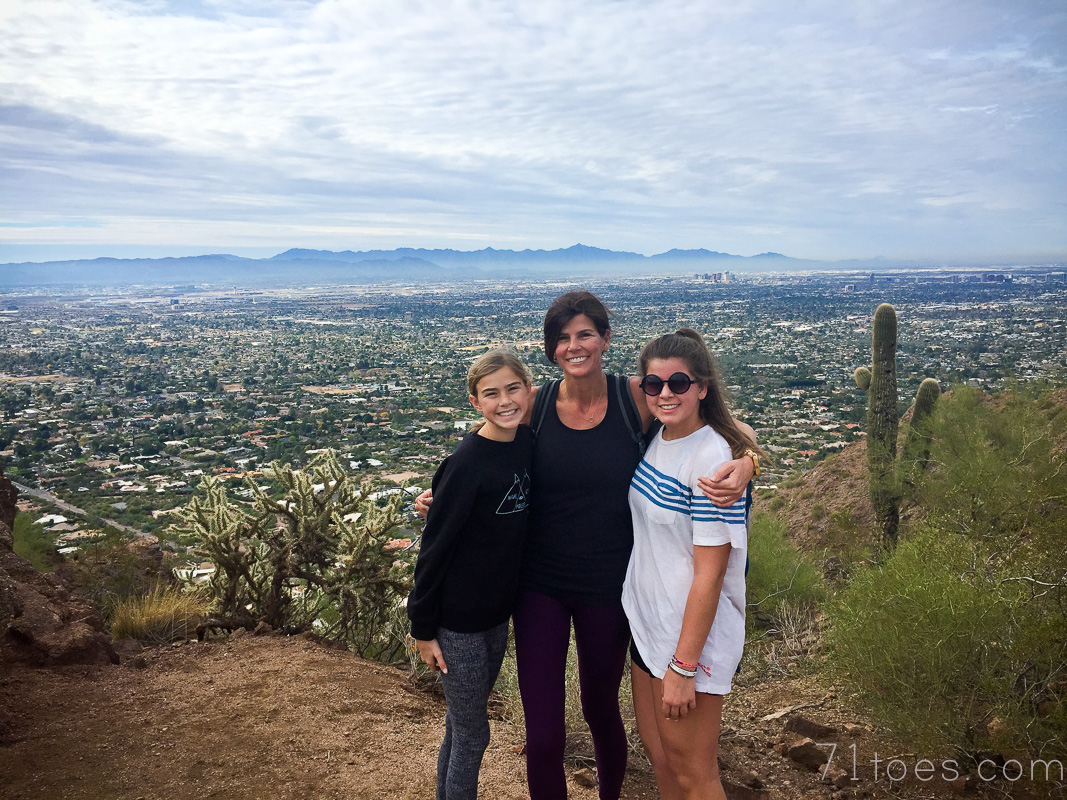 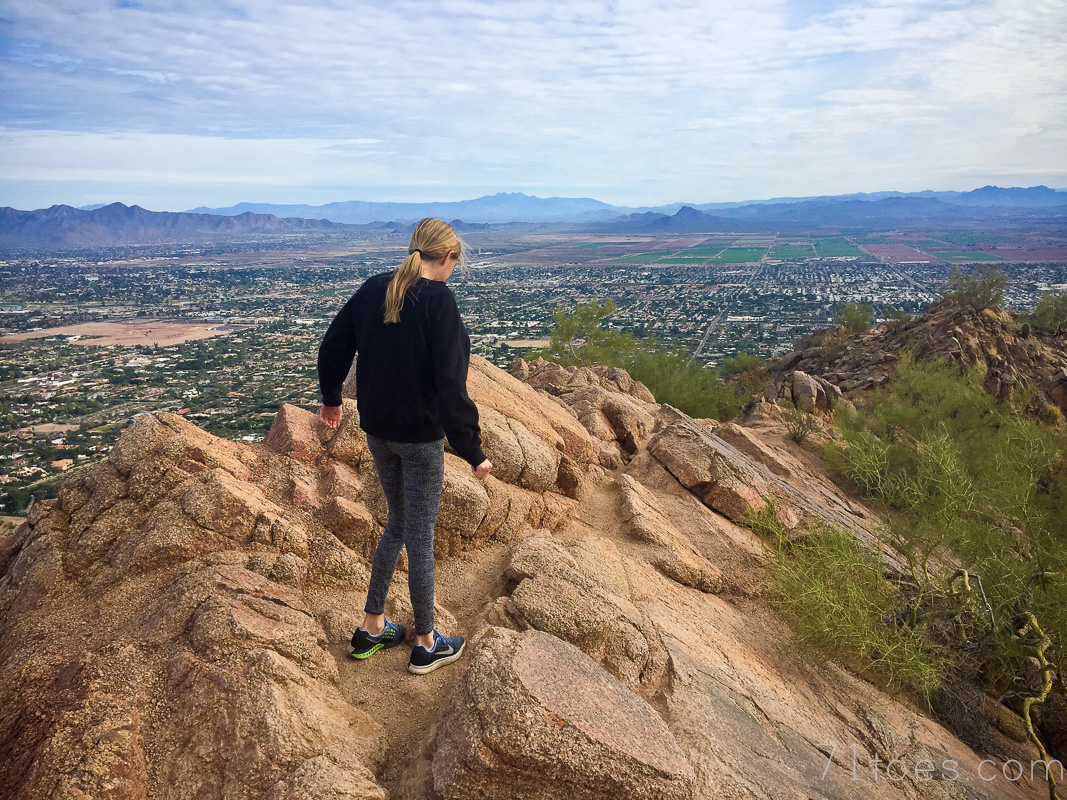 Oh it was such a great break.

Now the question is how to keep the momentum going now that we’re back in the school/schedule grindstone.

We are working on new job charts and new ways to incorporate some extra memorization and writing, as well as spiritual goals and I’ll introduce what we’ve come up with when we get there.  But in the meantime I’d sure LOVE input as to what everyone out there is doing to keep motivated this fine new year.  I know there are pretty awesome ideas out there so please share!

The Nutcracker and other Christmas stuff

we love splendor! it's fun seeing one of my favorite people (that I have never met, sorry if that's creepy) playing a favorite game. Happy New Year!

I believe the light sticks are sparklers? You do crepes a lot. Even for parties where you have more people than expected. I think Lucy's memory is right. Happy New Year.

Its a shame we have to wait another 6 years before a Sabbath Christmas and New Years!

What is a bubble map?

It's just where you put a main theme in the middle (we put "2017"), and do "bubbles" (ideas relating to the theme with circles around them) branching out from that main idea. They did circles with goals and ideas on how to work physically, spiritually, mentally, etc. I'll have to explain more about this once we get them all situated and moved to our three-ring binders.

Which hike is that? We have done Camelback and Flat Iron (yearly hike tradition) and that one looks like a good one!

I laughed so hard at this post. i miss you guys. babes all you

miss you too!
xoxo

and kms is a hoot love her

Got our kids garmin vivofit jrs. For Christmas and they are still going strong counting steps and competing with Dad. Also you can program chores into their bands too! If you got one for lucy, get an adjustable band, had to get one for my 10 year old. 🙂

What card game is that? I can't wait to see your bubbles we would like to do something like that with all of our kids.

I've been thinking about resolutions this year and realised that they are the same every year. So I guess you could say I am not very good at being motivated. But then on the other hand – with the risk of sounding full of myself – I feel like I'm pretty good already. And while there is always room for improvement, I decided that this year's resolution is to not worry so much, but to enjoy all life has to offer.
I don't mean to actively plan on how I might enjoy more like you did a few years ago. It shall be more of a "along the way deal". For example, if I eat a delicious chocolate cake, I will just enjoy it and not think of calories (hope this isn't too much planning already…).

Here's to hoping there aren't too many chocolate cakes! 🙂

First of all, I found your blog about a year ago when searching for how to organize job/chores/money system in our home, which has worked AMAZINGLY for my 4 little kiddos! Thank you!! Second, I'm pretty sure I live in your same neighborhood. I recognize those beautiful Ash Tree lined streets and white picket fences 🙂 I'm sure we know a lot of the same people!!

Love your blog. I kind of hate New Year's resolutions, maybe because by Feb I have forgotten them- haha. A few years ago someone told me they come up with a word for the year and work on that. I don't know why but that seemed to fit me better, even though it's very similar. Last year our family's goal was Kindness. I printed the word and out it up on our bulletin board to remind us. This year the word is FOCUS. I had all of us come up with a word for each letter that we could work on. For example, for the letter F my daughter said faith. Hopefully we can stick with it. Good luck to you