Home Nothing to Envy 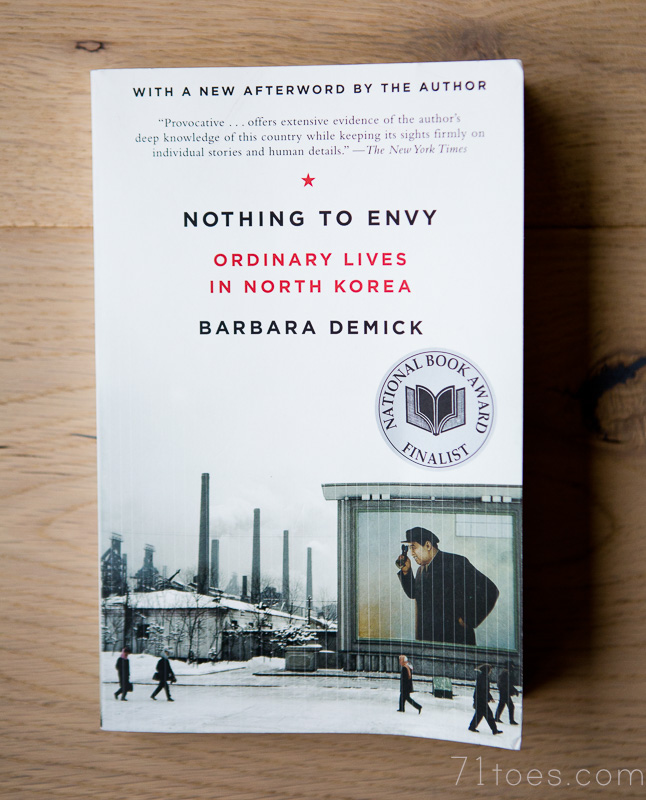 My mom recommended it from someone who recommended it to her from her book club.
It is a book filled with the stories of a handful of people who have defected from North Korea, and it was fascinating and heart-wrenching and eye-opening all at the same time.
The stories were compelling, and the history was wrapped into each story in such a way that it drew me in and I learned so much.  I was horrified at the same time as I was compelled to keep reading.
Dave and I watched a documentary about North Korea ages ago which has stuck with me ever since.  Our friends from China had a chance to actually go there for a couple days last year and it was so fascinating to watch their Instagram posts about their journey…it is such a peculiar and sad and unpredictable land.
The book is called “Nothing to Envy” because of a quote from a popular song one of the defectors remembered from when they would recite it at school:  “Our father, we have nothing to envy in the world. Our house is within the embrace of the Workers’ Party. We are all brothers and sisters. Even if a sea of fire comes toward us, sweet children do not need to be afraid, our father is here. We have nothing to envy in this world.”
This was recited in the schools when people were starving to death from lack of food.  All the “Dear Leader” references intermingled with a whole country seemingly hypnotized at times because they are not allowed to think for themselves eerily reminded me of Ayn Rand’s novel “Anthem” that Grace is reading right now.
I haven’t hosted our book club in ages, and normally I would have been all over that, baking and coming up with discussion topics.

But it happened to come up right at the end of our crazy couple weeks when Bo and our two extra girls were living with us (back here), and I’m not kidding around when I say those weeks felt like I was in some sort of a blur.  Suddenly I realized I still had more than half of the book to read and I was two days away from book club.
So I hired a babysitter for all three of my charges while the big kids were at school and went to sit in a parking lot to READ.
I read every minute I could.
I had read-a-thons with the girls and got everyone reading so I could finish that thing in time. 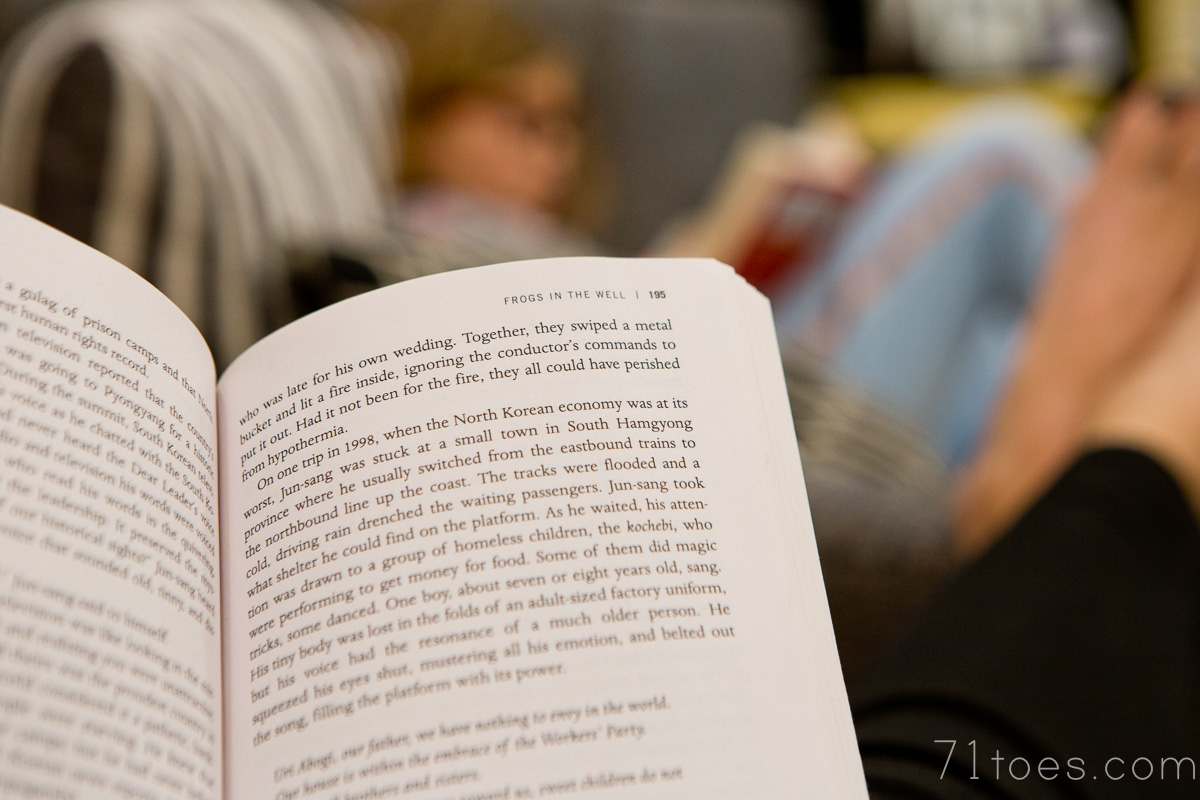 And I finished up the last couple pages just as my first friend showed up at the front door.

The amount of fold-over pages generally illustrate how intrigued I was by each book I read…this one might take the cake on the most markings: 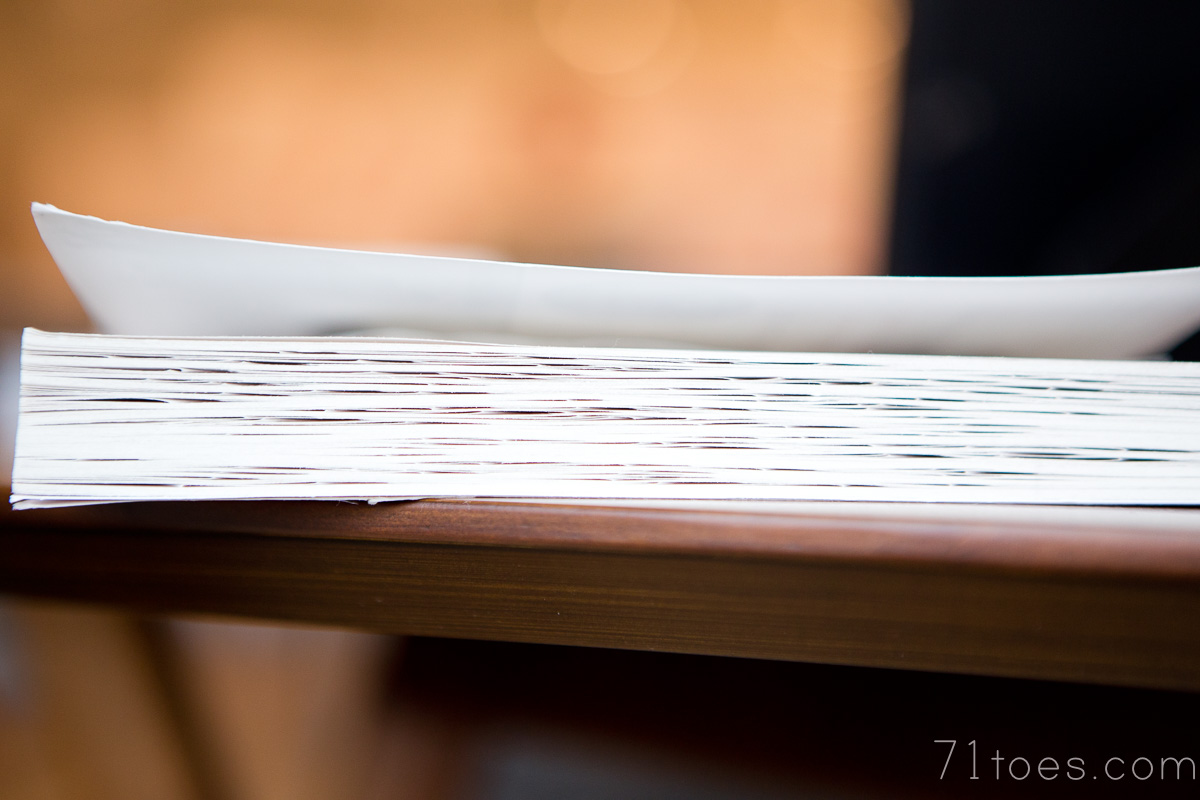 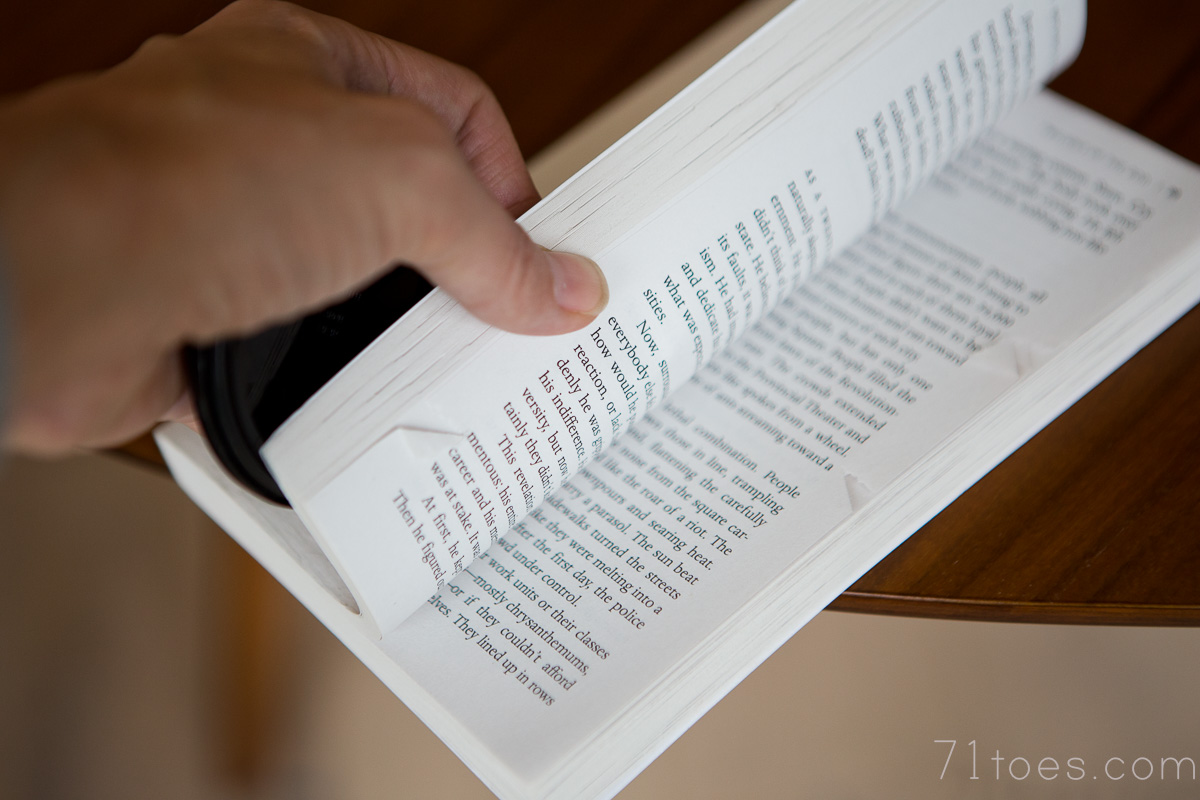 So many interesting things to think about!

All these lovely ladies showed up and the discussion was lively and interesting…at least that’s how it felt swirling around me.  I really wasn’t myself and wasn’t overly prepared.  Thank Heavens it was a book that lent itself to some serious contemplation and discussion without any question prompts from the group foggy leader.

Love these ladies, so many of whom we have read together for so many years. 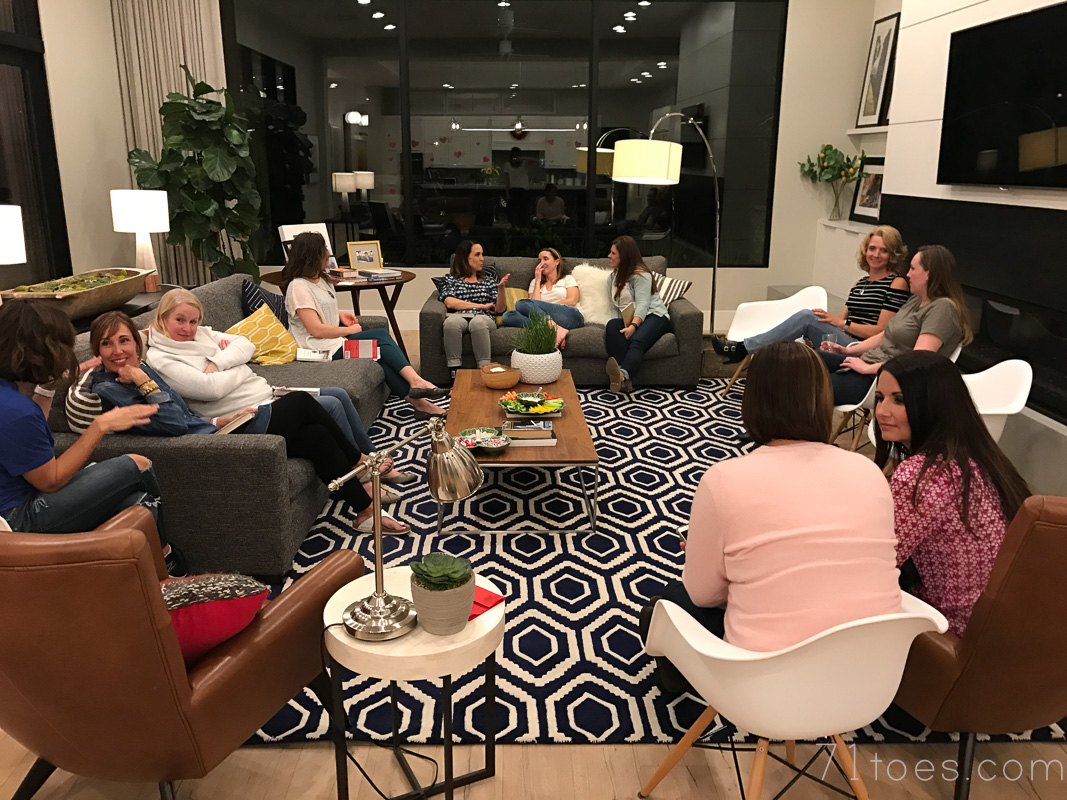 At the end of the night, as I bid the last guest farewell, I realized I had some good black beans stuck in the front of my teeth.  Nice.

That was the kind of night it was 🙂

So much to discuss yet such a blurry mind those days!

So it’s good for me to re-think it all through now that my brain is a little more functional.

Although there are too many to count, here are a few quotes that stood out to me:

“North Korea invites parody. We laugh at the excesses of the propaganda and the gullibility of the people. But consider that their indoctrination began in infancy, during the fourteen-hour days spent in factory day-care centers; that for the subsequent fifty years, every song, film, newspaper article, and billboard was designed to deify Kim Il-sung; that the country was hermetically sealed to keep out anything that might cast doubt on Kim Il-sung’s divinity. Who could possibly resist?”

“If North Koreans paused to contemplate the obvious inconsistencies and lies in what they were told, they would find themselves in a dangerous place. They didn’t have a choice. They couldn’t flee their country, depose their leadership, speak out, or protest. In order to fit in, the average citizen had to discipline himself not to think too much.”


“North Korean defectors often find it hard to settle down. It is not easy for somebody who’s escaped a totalitarian country to live in the free world. Defectors have to rediscover who they are in a world that offers endless possibilities. Choosing where to live, what to do, even which clothes to put on in the morning is tough enough for those of us accustomed to making choices; it can be utterly paralyzing for people who’ve had decisions made for them by the state their entire lives.”


It is a book that opened my eyes in ways they needed to be opened but was tragically sad to read.  This is our world.  It’s almost unfathomable to recognize that this little country is part of it.

Go read it!  (Other reviews and information over HERE.)

Choosing to learn about North Korea means putting yourself in an uncomfortable place. You are brave to read the book. Eternal president, the isolation, the control. Yes, North Korean leaders are deities and not leaders. It's a cult. A cult with camps. A cult that punishes relatives of those who challenge or are perceived to be a threat. A cult with missles.

I haven't read that book, but I did just finish "A Girl with Seven Names" about a defector from North Korea, which I highly recommend. Like you, I found the descriptions of every day life in North Korea fascinating! I'll have to add this to my list!

Sounds interesting, I'll have to try that one too.

I read this book years ago and it's still my #1 book club recommendation book. So horrifying. The part I remember most is that dogs in China eat better than doctors in a North Korea.

Yes that part really stuck out to me too.

Hi Shawni, what breeder in Utah did you get Bo from? My daughter is very similar to Elle and leaves in notes, contracts, Dear Santa letters, for a dog and she's saving her money. As a mom that doesn't even like dogs or animals…and I read that you weren't a dog person as well. Would you do it all over again with Bo? I've read your posts on the bit of craziness Bo is and am just wondering if you had a second chance would you do it again?

We got Bo from here: http://www.goldendoodlesutah.com/
Kristen the breeder is awesome.
I'm still not a dog person, maybe I never will be, and Bo is for sure a handful. I will do an update post on her soon. But she is a puppy and learning so much every day. If I had a second chance yes, we'd do it again because it is amazing to watch the love of my girls for their dog. That makes it all worth it.

I'm Korean American and my grandparents are from what is now North Korea, though when they were born it was all one Korea. During the war they escaped from the north (a crazy story in and of itself) and settled in Seoul for a few years before ultimately immigrating to the States. I often think about two things, one is how different their lives would have been if they hadn't made it out of the north, and two is how insanely North Korea has changed within their lifetime to become what it is today, as when they lived there it wasn't like that. I'm always reminded when I hear stories like these. I haven't read this book but I hope to soon! Thank you for sharing!

Yes you would love this book. My high school friend who just came this last weekend's parents defected from North Korea as well. It was pretty fascinating to talk to her about all that with the extra knowledge I gained from this book.

So glad you shared. I am definitely adding it to my book list. I love books about people and lands that challenge and stretch my world view. I just hosted my book club for the book "Mornings in Jenin" which is the only historical fiction written from a Palestinian perspective of the founding of Israel. It is so poetic, beautiful and tragic all at once. My copy ended up marked and folded like yours above. It was recommended to me by my sweet neighbor Janine whose father, at 14, carried his 3 year old nephew on his back and a 30 kilo bag of precious flour in his arms and as he followed his mother out of their ancestral village that was being bulldozed. They walked to Jordan and his mother passed away shortly after. My friend's name, pronounced the same as the village/refugee camp in the book, took on a whole different meaning for me.
I would highly recommend it. Book clubs are the best!

If you love books told from a Palestinian perspective about this subject, one of my all-time favorite books is entitled "Blood Brothers" by Elias Chacour. It is powerful! Chacour is a Palestinian Christian who lived in Galilee and witnessed everything hat happened. He has been very involved in the peace process there, and shared his experiences and perspective. It's beautifully written and is the only book I've ever read that represented the Palestinian people to be the beautiful people I knew them to be when I lived in Israel.

Thank so much for the recommendations. I have "Blood Brothers" but I haven't read it yet. This makes me more motivated. And "Mornings in Jenin" sounds like a must-read as well. Thank you!

I just finished reading the book "Wonder". It has nothing to do with North Korea but was a wonderful read about how kids and adults can choose kindness. As a Mom of a child with a physical birth defect (not very noticeable but kids notice everything) it made my mom heart hurt at times but also filled it with a lot of love for those who are so kind.

I just finished The Great Leader and the Fighter Pilot, another true story of a defector from N. Korea shortly after the Korean war. It was never indicated he was a man of faith, but I certainly saw God's hand in his early life and escape. Highly recommend. I will definitely find this book, thanks for the suggestion.

I read this book a few years ago and it has always stuck with me. I've recommended it to more people than I can count. So thought-provoking and it really puts so much into perspective for me as an American. We are so blessed! Did you hear that the BYU student that was referenced at the end of the book was found recently? Crazy stuff.