September 14, 2017
While Elle was home for the summer, she went ahead and turned 19 years old. 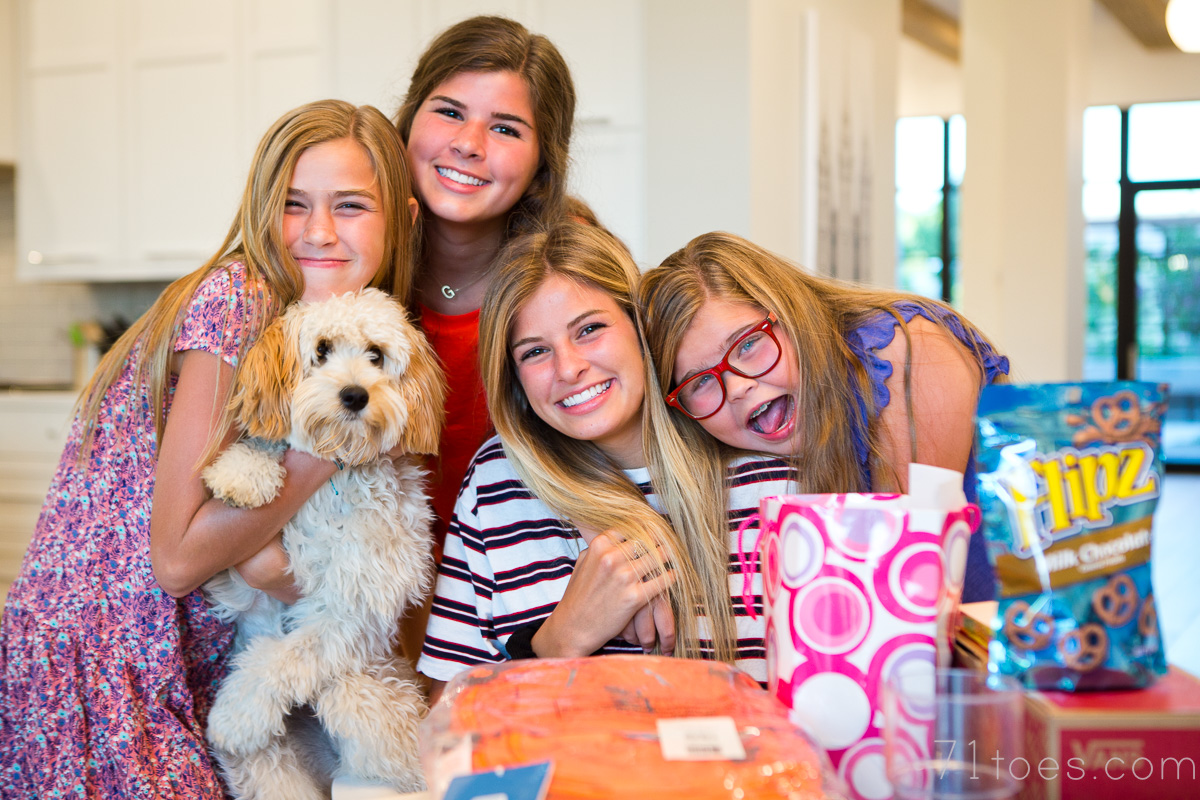 Which is nutty in my opinion.
I wrote my 19 things I love about that girl back HERE, but here’s what we did to celebrate:
We took the girls as well as a few friends and Dave’s brother who was in town on a little birthday trip to the lake. 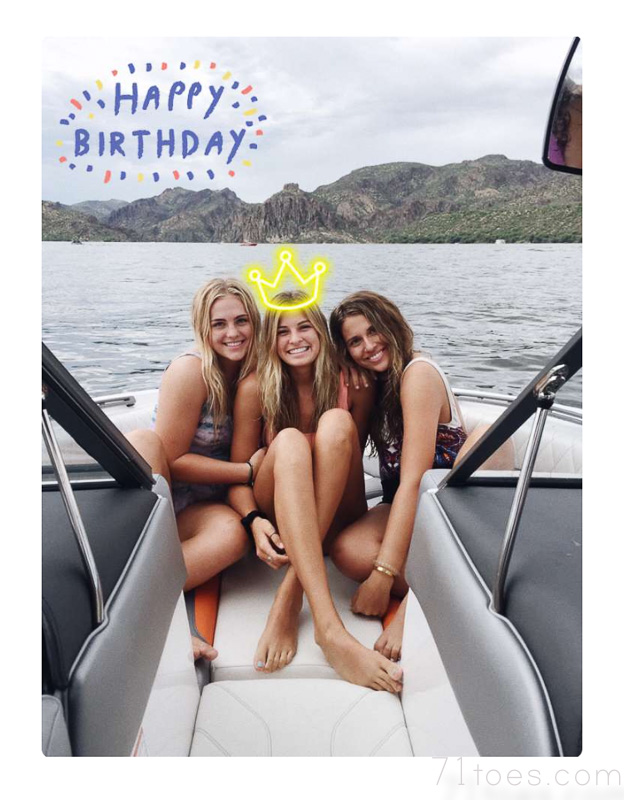 It was true love from her dad to take her on this trip because man alive that lake was incredibly crazy that day and that is a stressful deal to get that boat out there.  It was as if everyone and their dog figured August 12th was the best day ever to be at the lake.
But we all had a pretty grand time.  (Claire and I came a little late after her 7:00am soccer game). 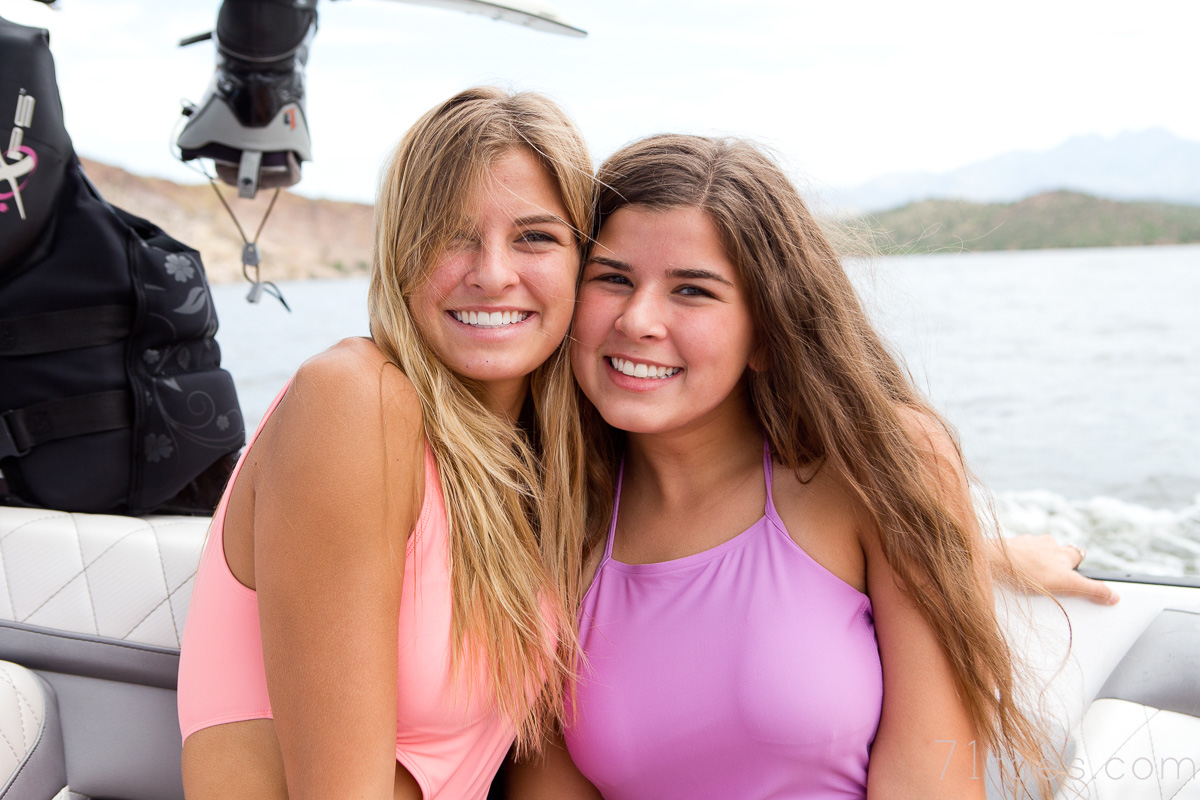 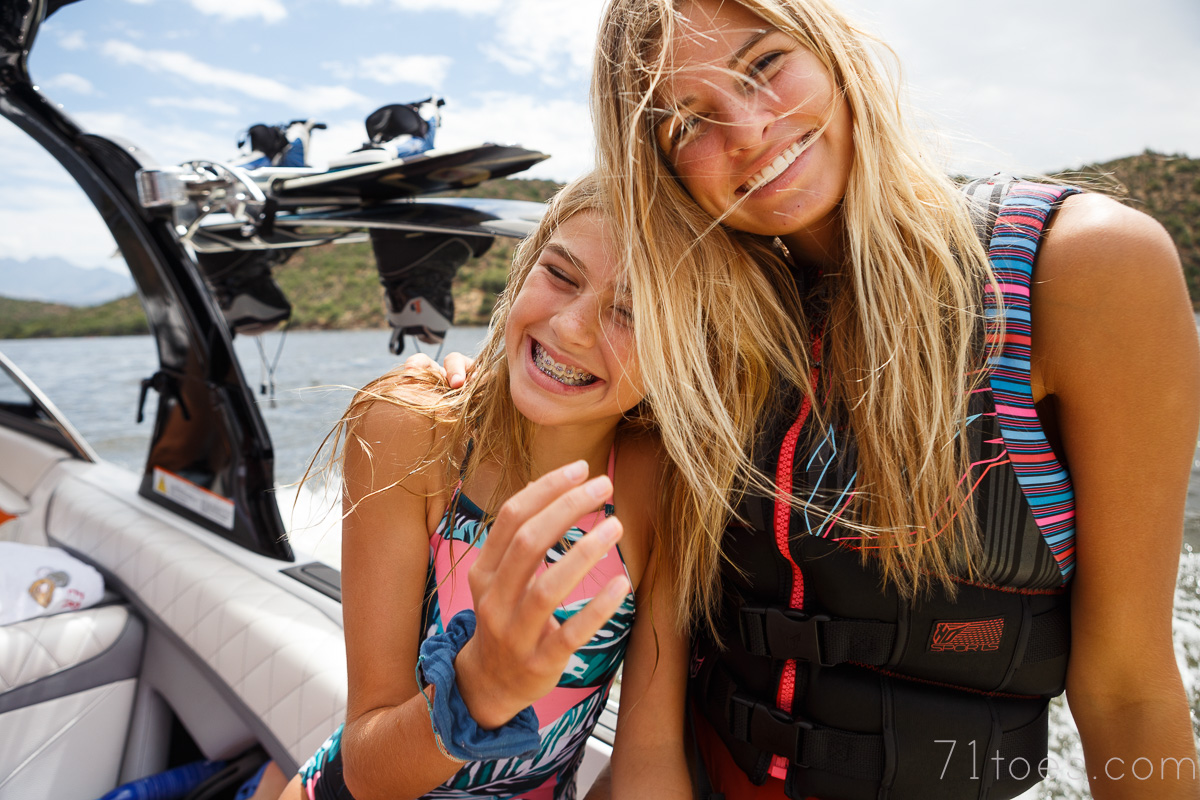 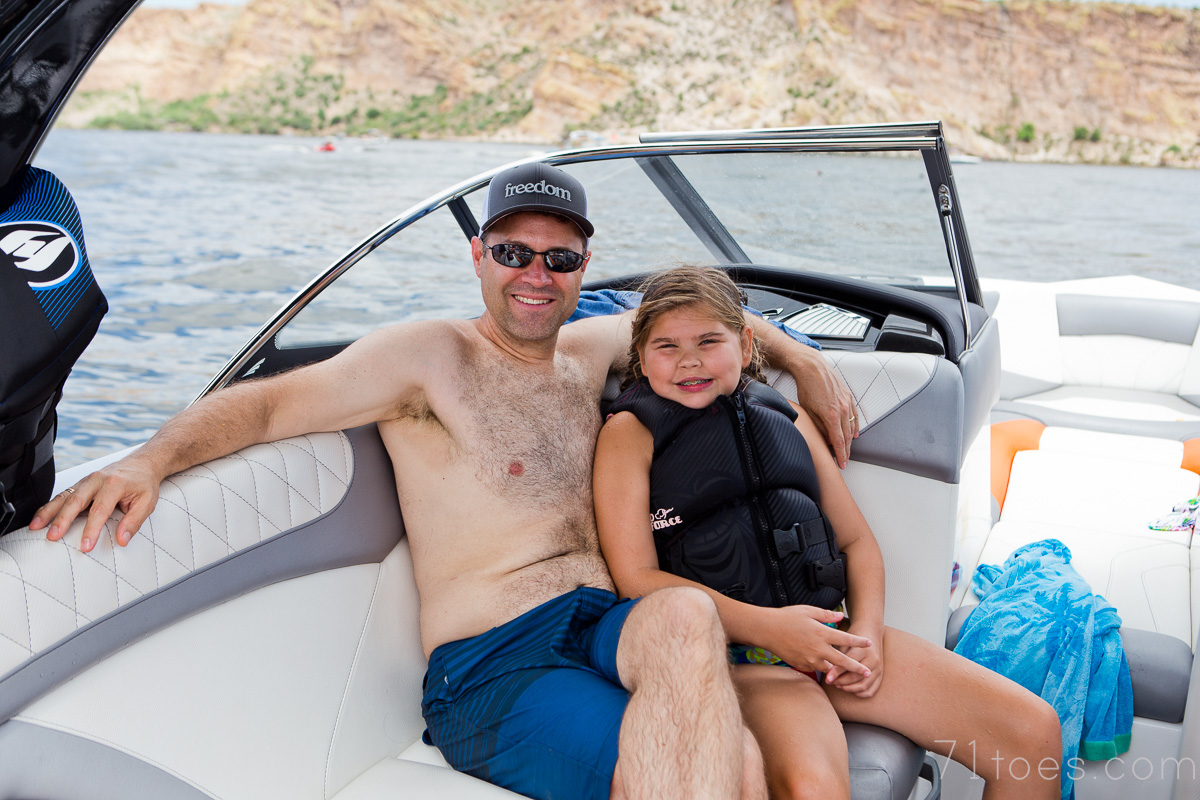 …who Lucy thinks is pretty awesome.

These girls tried all kinds of new tricks which cracked us up. 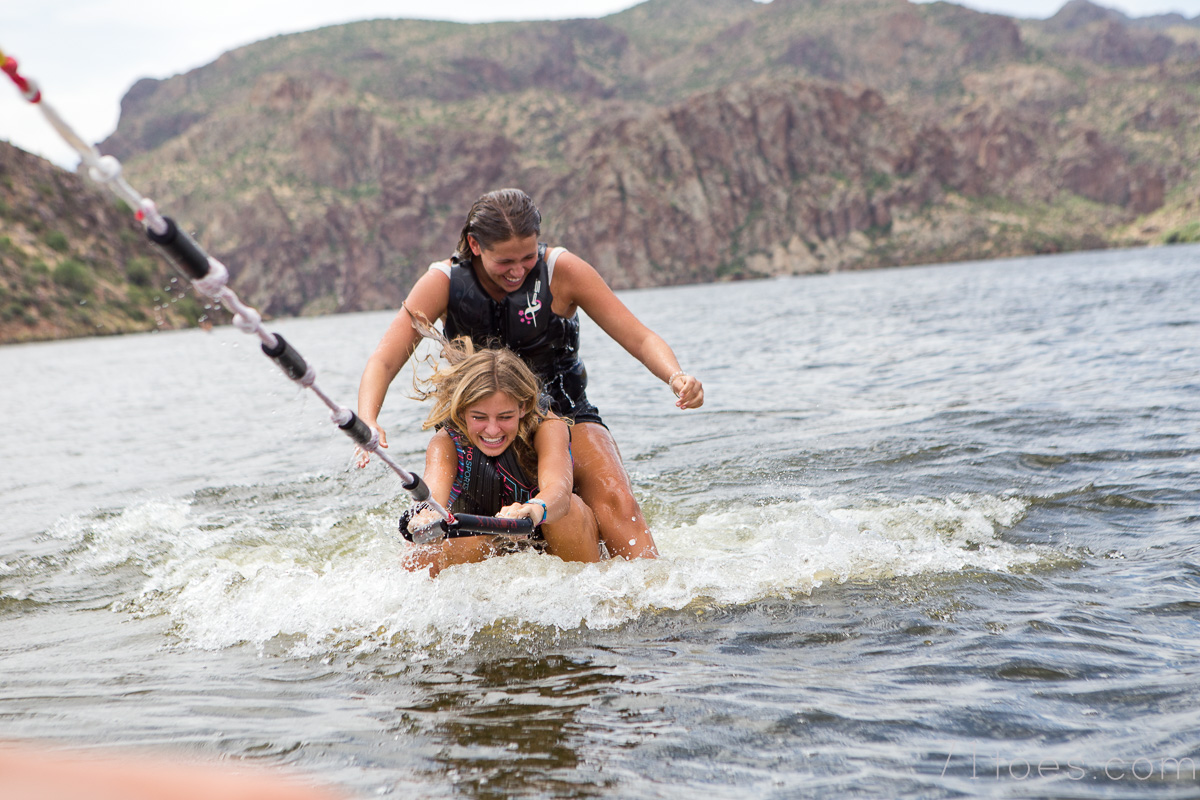 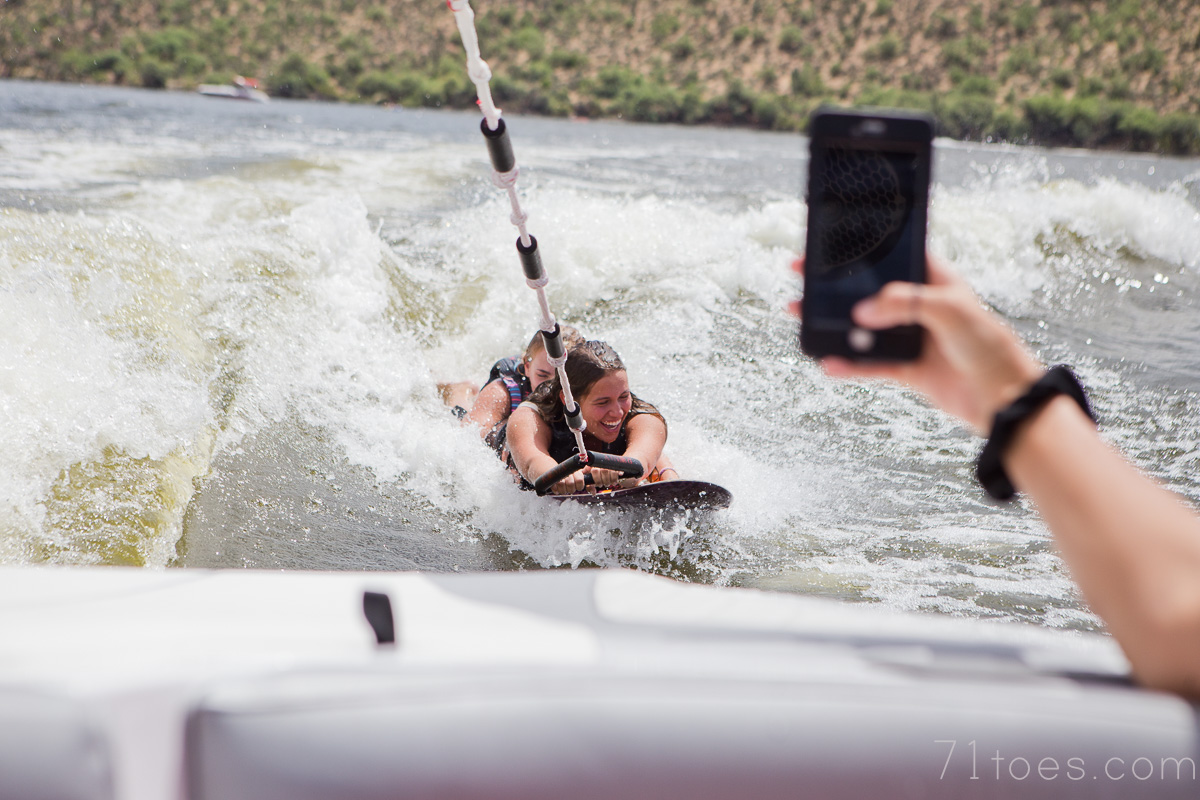 We floated the birthday cake at that lake. (Elle’s birthday tradition…more about that HERE.)

Except it wasn’t really a cake…it was a granola bar: 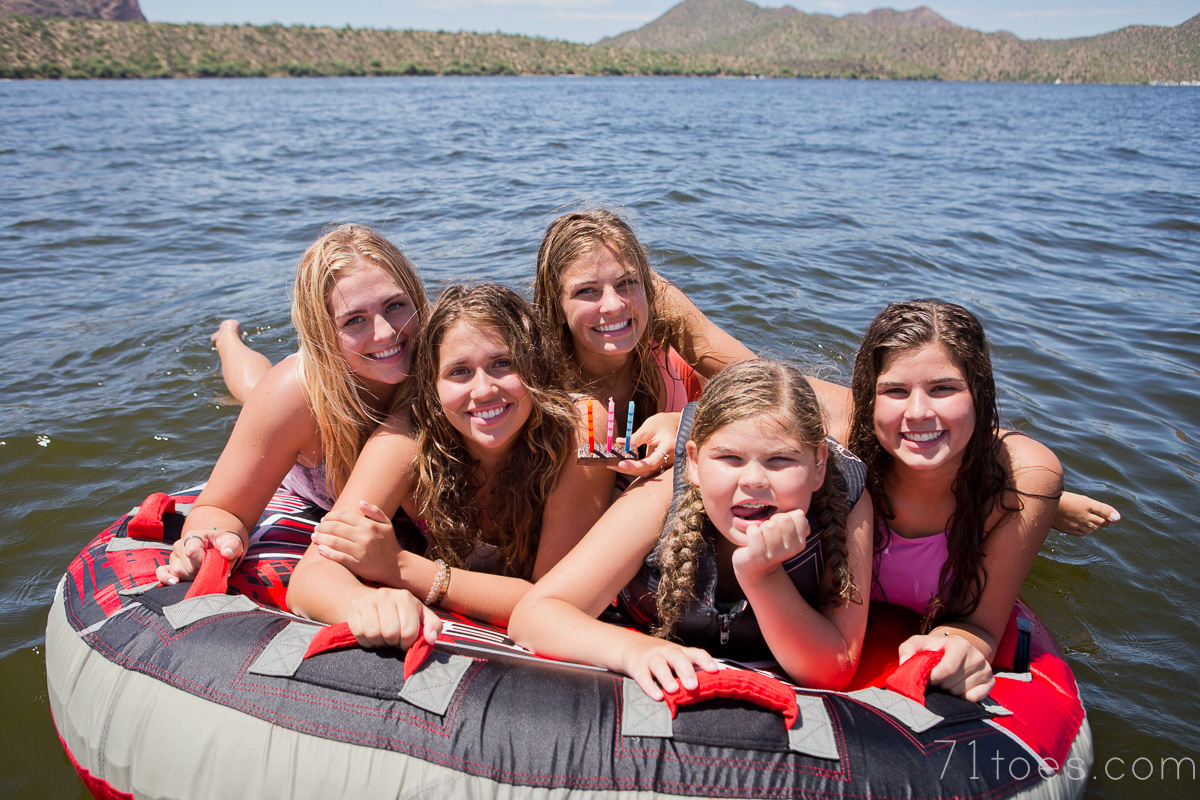 And it was “floated” on a raft with five girls.  And we couldn’t get the candles to light because of the wind.

But hey, it was floated:) 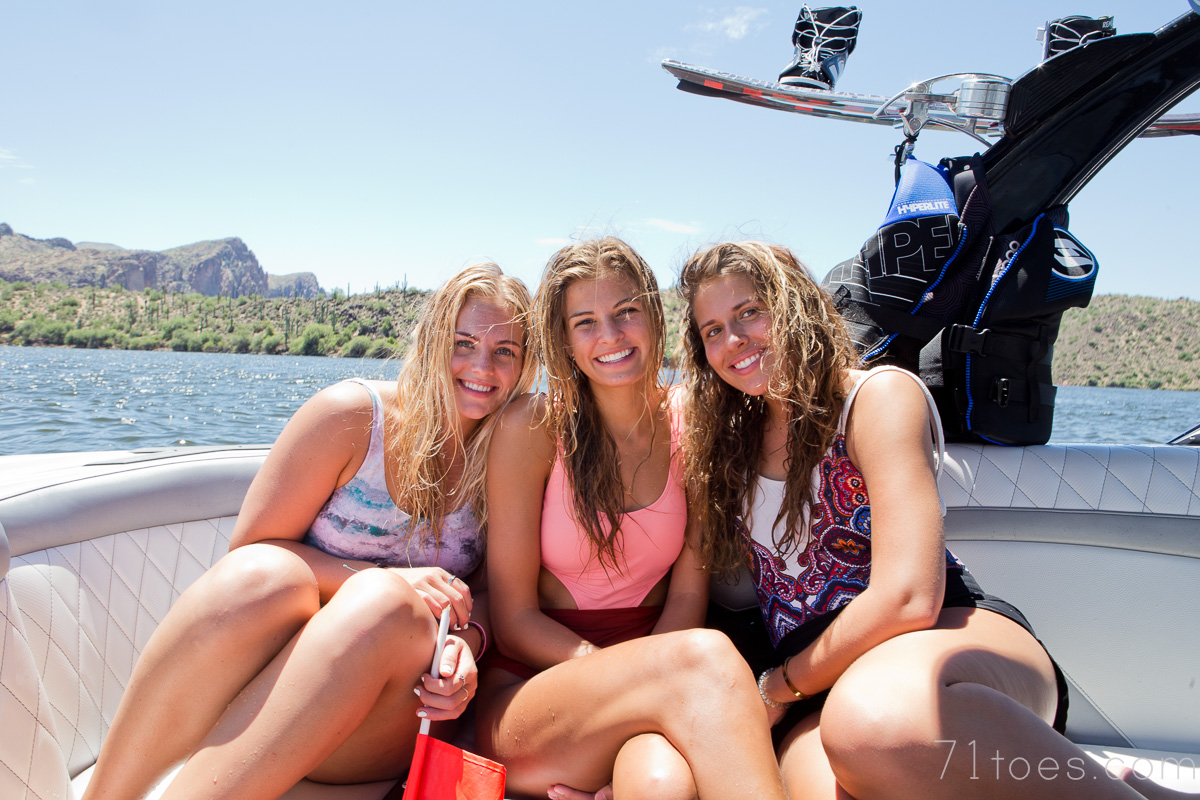 These cute Hawaiian girls brought over some bday treats… 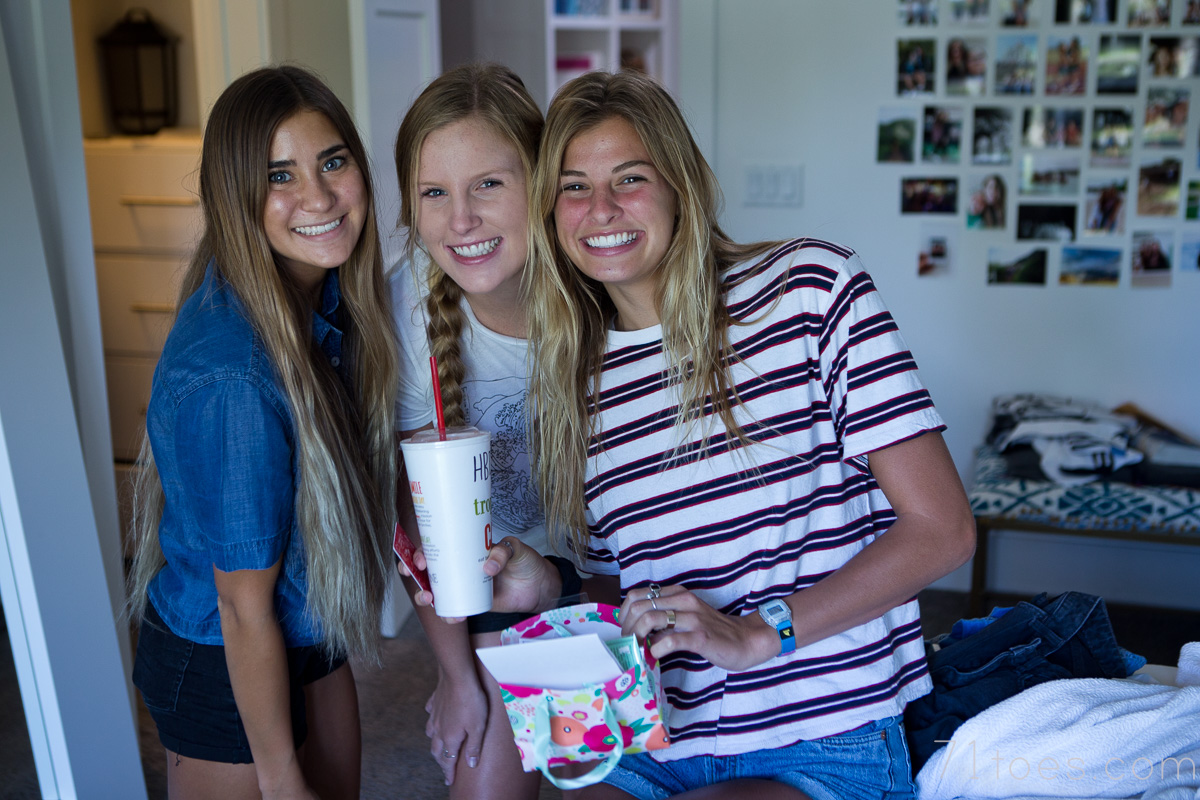 …and so did these awesome grandparents: 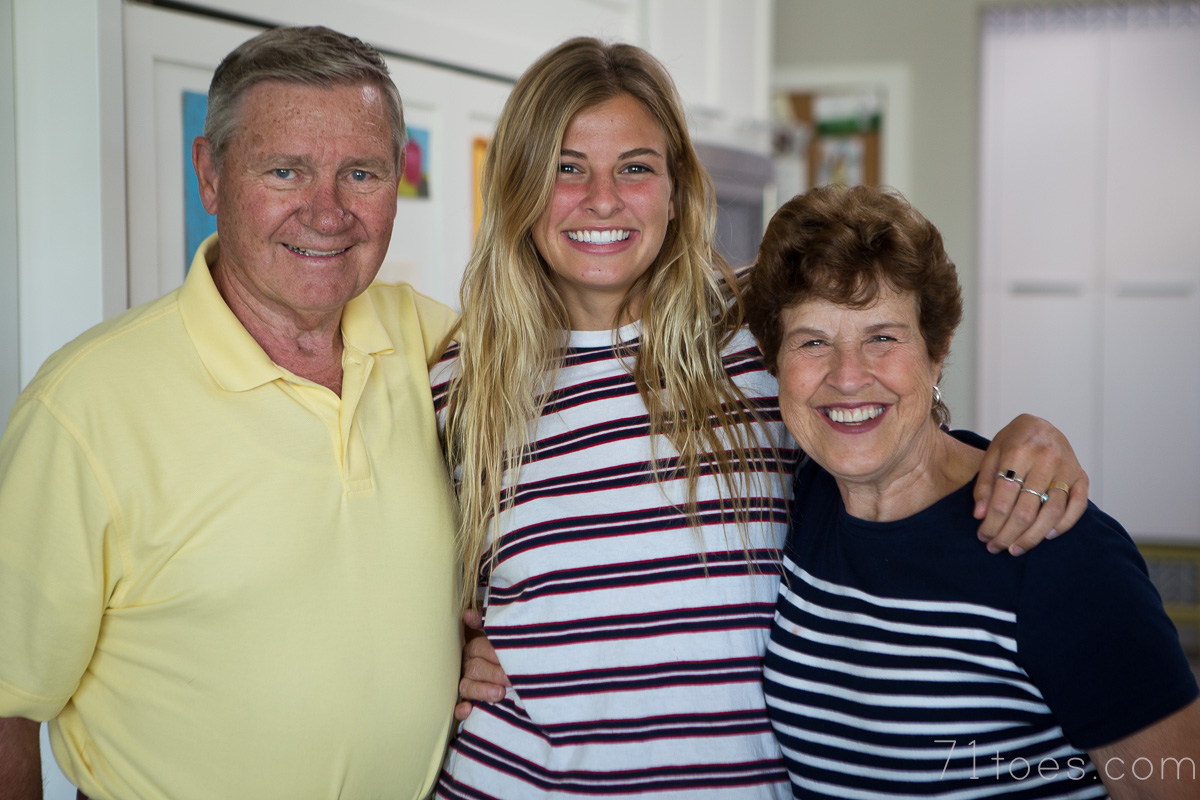 We are creatures of tradition over here, so it was weird to switch up the birthday breakfast tradition to a bday dinner (chicken tikka masala, our favorite…recipe HERE). 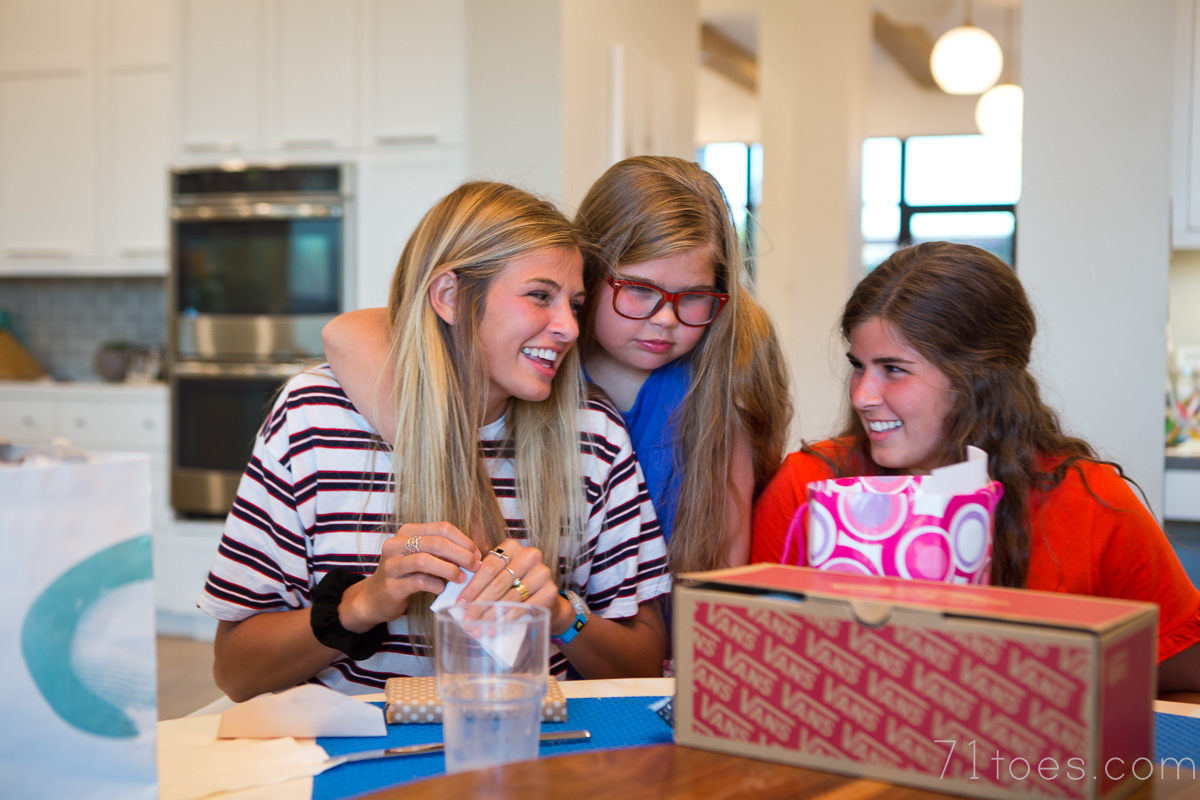 But we survived just fine.

Gifts were given, hugs were spilled out, and love filled up that room of sisters. 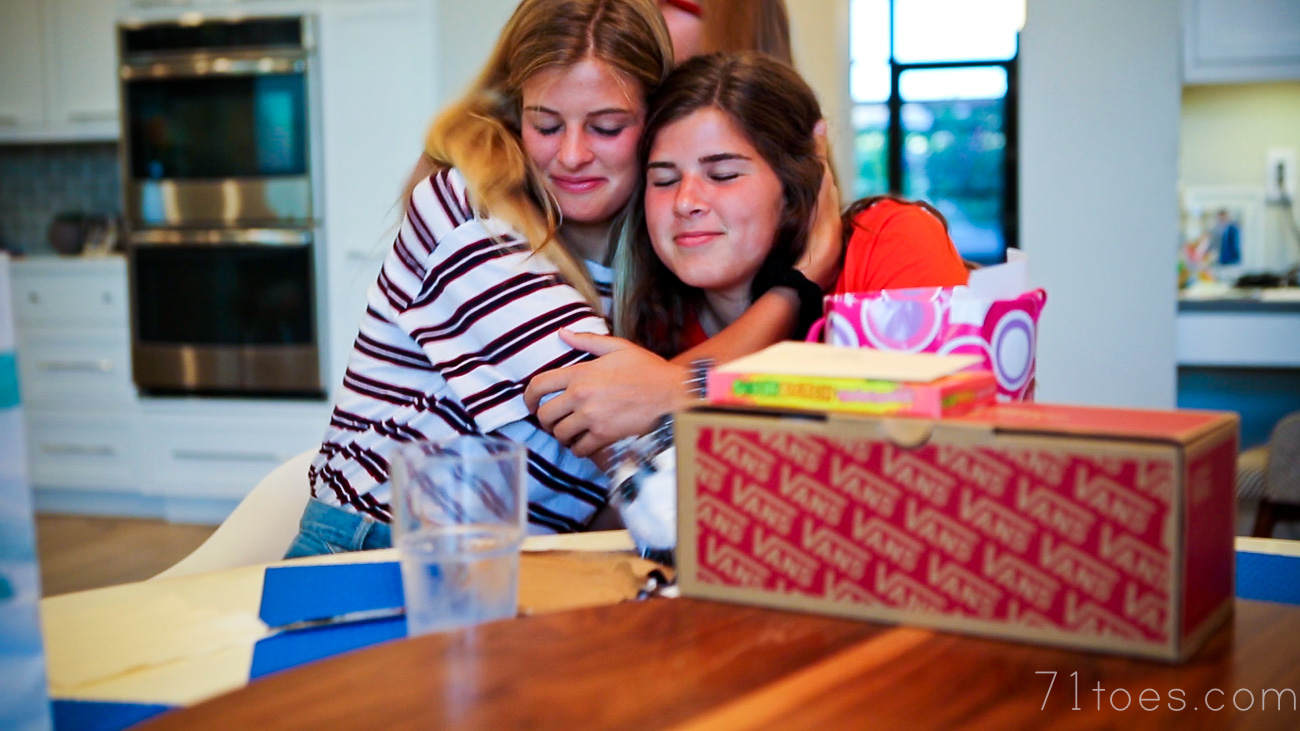 Our sweet nephew (Elle’s cousin) had his wedding open house that night, so we opted to have cake the next night.  We still blew out candles on a “fake” cake (donuts) on the real-deal night though on our way out the door to celebrate that wedding. 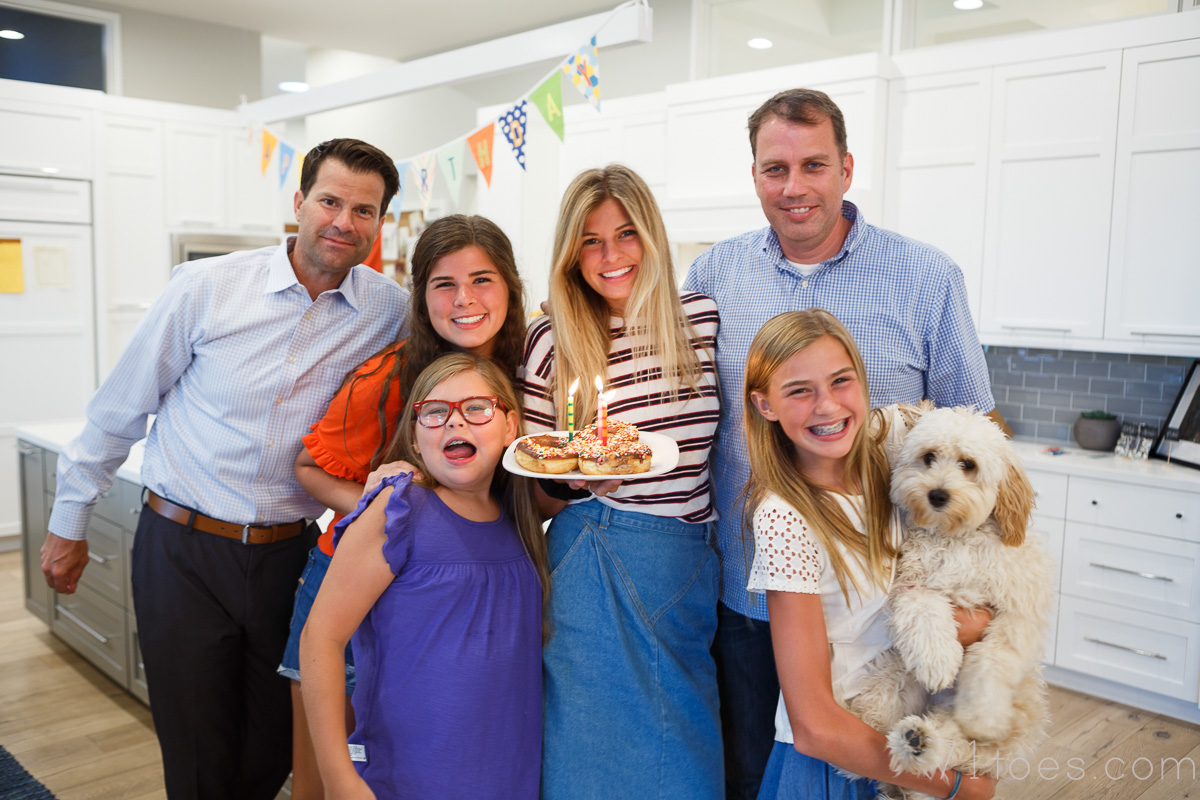 Then the next night we had Elle’s cake request:  hot cookies and ice cream. 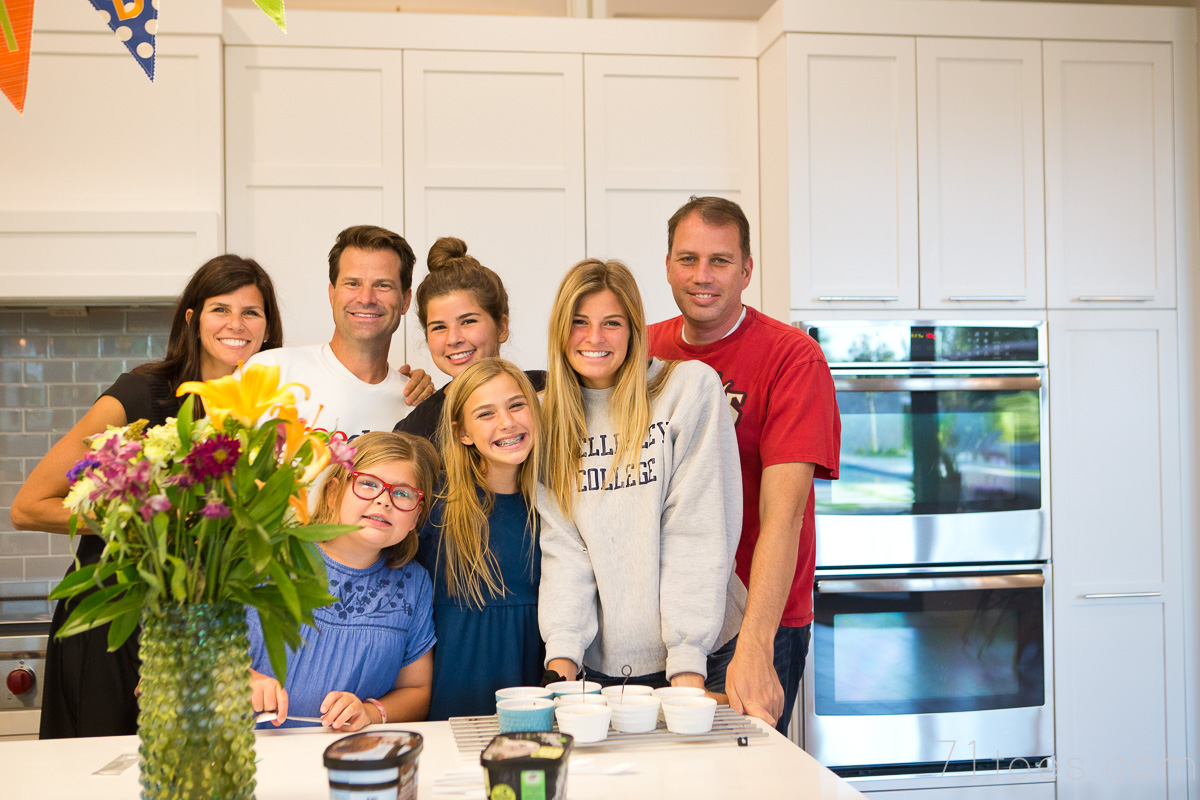 That’s a girl after my own heart I tell you!

We had sparkler candles (compliments of her friend), and it took us a lot to get those suckers burning which cracked us up during the birthday song: 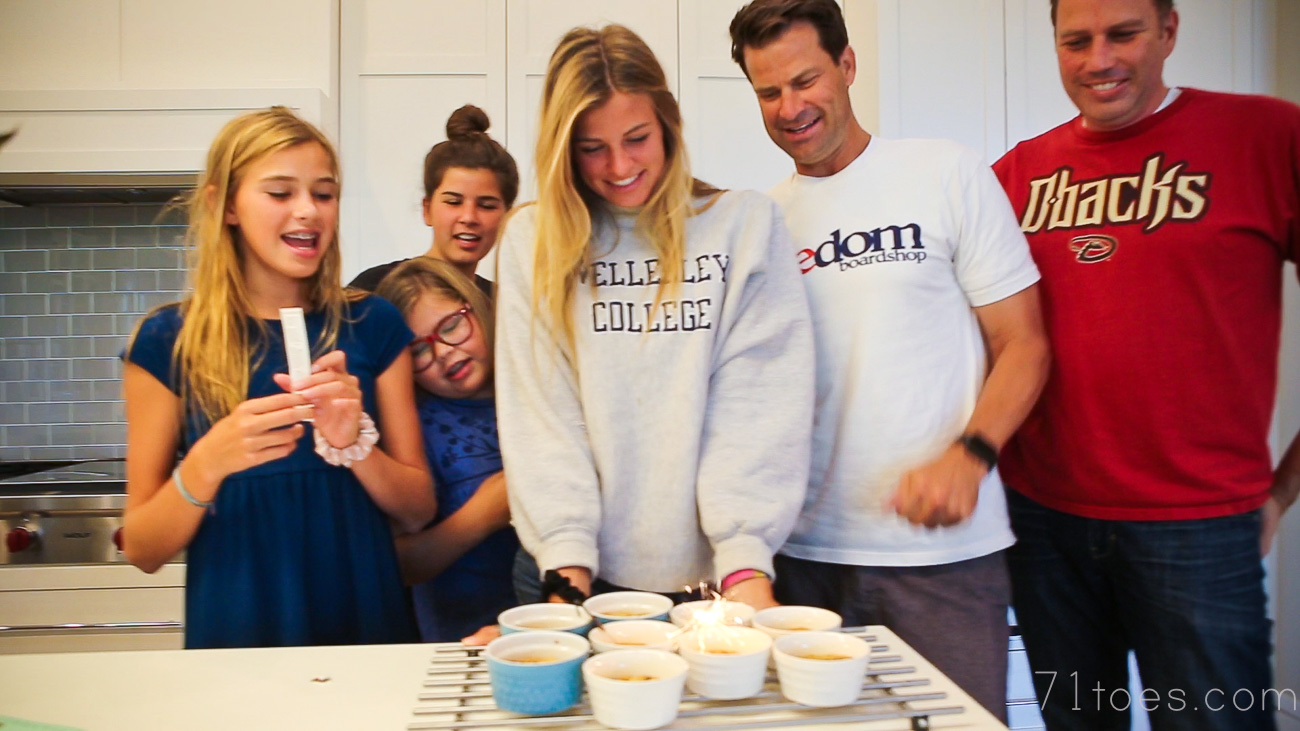 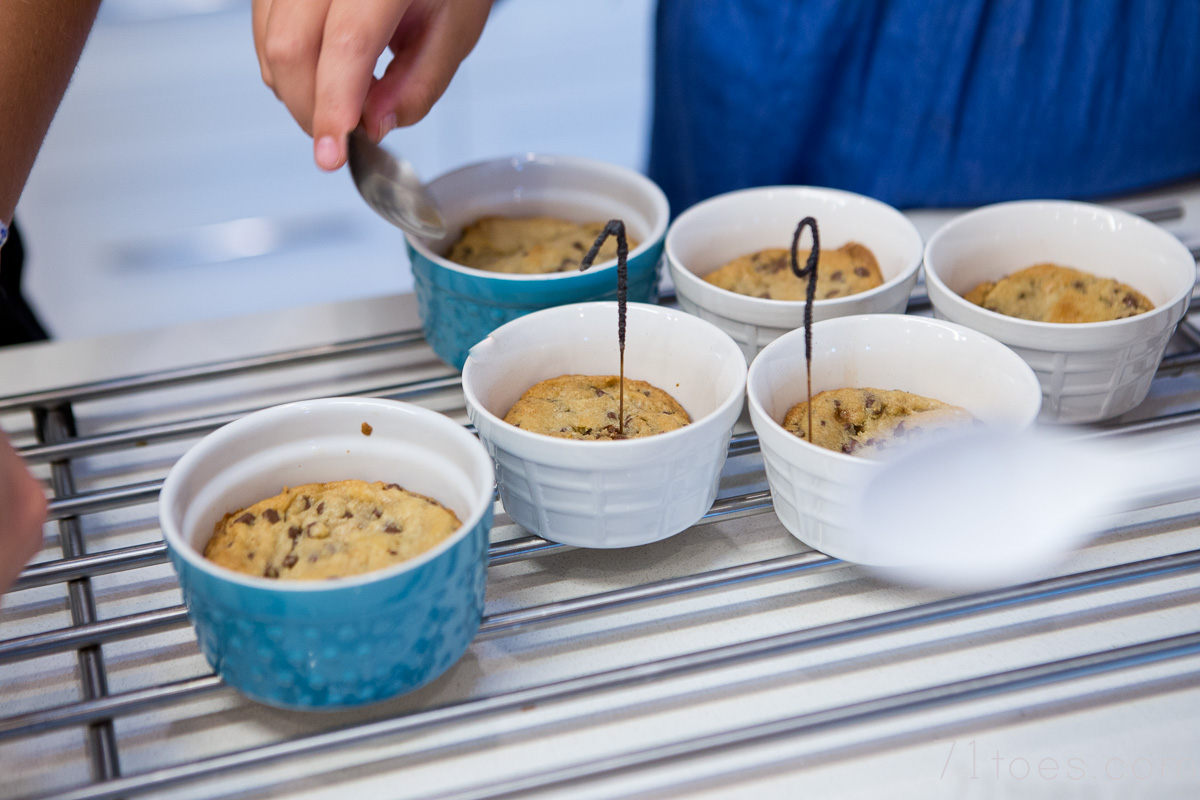 But mmmmm, they were good.

Elle was right there with us in person and we forgot to get our traditional cheek-kissing-birthday-picture dang it!  Maybe we’ll have to head over to visit that girl and get it a little late.

six girls on the beach

can you ask elle where that suit is from?? thanks!!

i am surprised she isn't wearing a BYU I sweatshirt.

Yes I know but she attending BYUH at this moment in time. Surprise is not horror. It's not a character flaw. She is old enough to decide which school to go to and what clothes to buy. She didn't name herself. Course it could have been a borrowed one from her mom cause she happened to be cold that moment.

Sooo… shouldn't she be wearing a BYU H sweatshirt, not a BYU I sweatshirt, Kris? WHO CARES???!!! Why, out of E V E R Y T H I N G in this post is that the only thing you found to comment on? I mean, I don't think your bashing, I'm not WKer, just wondering, as that something that never would've stuck out to me. Who cares? That's like someone seeing my son wearing an Atlanta Hawks sirs and wondering why he's wearing that -he doesn't play basketball, he only plays baseball – why would he wear a shirt depicting a basketball team team?! 🙄 Good grief!