April 24, 2018
Mother’s Day is right around the corner (what??? how did that happen so fast?) and I have got the perfect gift idea.
It is a book written by a woman who has perfected the art of GRANDmothering as far as I’m concerned.  She’s come up with so many amazingly beautiful grandmothering ideas over her years of grandmothering 31 grandchildren (ok, she hasn’t done a ton of grandmothering with the newest two, but I’m sure they feel her love already, especially the one she was there with when he swam into this world a couple days ago), and she finally compiled them all into a book written with her most relatable “I’m in the trenches right with you” appeal that she has drawn me and thousands of other mothers in with over the years in her other books.
Yep, you guessed it: that awesome lady is my mother. 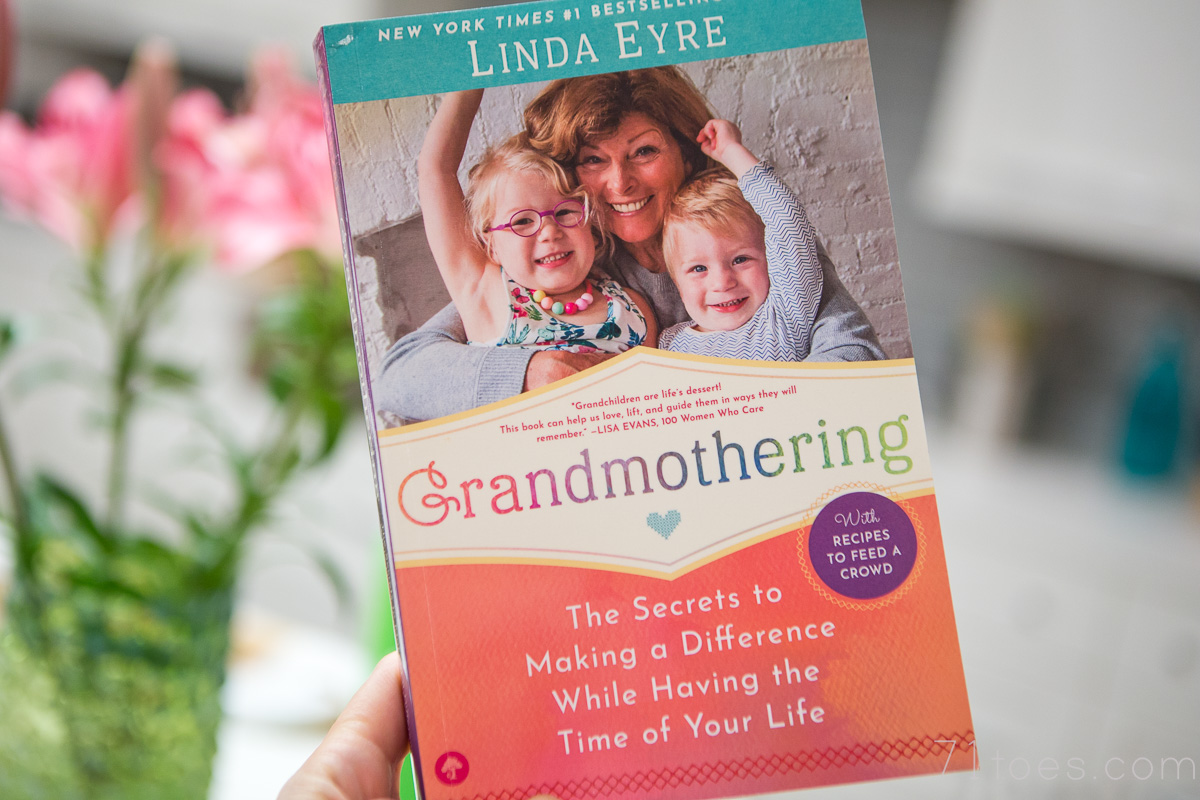 As I write, there is a squiggly red underline accompanying every “grandmothering” I’ve written here, so I’m sure I”m supposed to separate those words or maybe my spell check doesn’t want me turn that “grandmother” into a verb.  But I think being a grandma is more that just a noun, it’s an action.  So I adore the name of the book.  It is active and it takes work to really take it to the next level.  Luckily my children have TWO grandmothers (Dave’s mom is the best as well) who are deeply involved in not just being a Grandma, but they’ve taken that beautiful act of grandmothering to the next level, and it has made all the difference in their lives.
Not only does is this book filled with my mom’s ideas and funny stories, she has gathered other phenomenal grandmothers to include their wisdom and ideas as well.  There are all kinds of ideas in that thing I tell you!  Some of them include:
–embracing the in-laws
–welcoming new grandbabies
–suggestions for one-on-one and small groups adventures as well as how to organize  “Grammie Camps” (one of my favorite things my mom does every summer)
–the real world of life as a grandmother when “Things Go Wrong.” (part of that includes Lucy’s story)
–he secret ingredient for giving your grandchildren grit and working with the ever-present issues of entitlement
–stimulating ideas for taking care of yourself as you grow older
–thoughts for organizing exciting and inclusive Family Reunions
Two other things that are unique to this book:
1. An appendix with favorite family and friend recipes with all kinds of good ideas to “feed a crowd” when the family comes home, which are readily accessible on a companion blog at grandmotheringbook.com. You can just put the name of the recipe from the book you want in the search bar and it will pop up on any mobile device if you don’t have the book and for easy reading. That GRANDmothering blog will continue to add posts about ideas for fun activities with grandkids and current issues with grandchildren, which I think is a pretty awesome resource.
2. A way to see things like Grammie Camps and Reunions in living color through links to various blog posts.
Everyone tells me, as I pine over sweet new babies, that grandmothering is truly GRAND (it is closer to me now than my own newborns were, which is crazy).
I haven’t believed them.
I mean, what could be better than having your own baby?  I’ve been thinking so much about the pure magic of those newborn days as we’ve had two new babies born in my extended family this month.  But gradually I’m changing and I’m realizing this grandmothering gig could really be quite fantastic after all.  So grateful for my mom (and Dave’s mom too!) showing me the way.
In anticipation of Mother’s Day, my mom will be doing a couple book signings in Utah in case you live there and you’d like to meet that amazing lady.  And my Dad will actually be with her signing his new book too…which is all about GrandFathering:  Being a Proactive Grandfather: How to Make a Difference.  That book deserves a post of it’s own for another day (you can check it out HERE for now), because both these guys make me tear up even to think about how much work they put into grandnparenting, but for now, just know that they’ll both be at the Midvale Deseret Book store from 12:30-2:30 on May 5th and at the City Creek Deseret Book store on May 12th (the day before Mother’s Day).
If you’re not local, any Deseret Book should carry this book, and also, the easy route is Amazon.  It is HERE.

There you go.  Mother’s Day shopping wrapped up. Ha!  But really, even for the mothers who aren’t grandmothers yet…it’s a gem of a book.
5 comments 0 FacebookTwitterPinterestEmail

thoughts from the weekend

I agree, your mother is truly a gem!!! I have read your mother (& father’s) books for years and hold onto their every word. They have been great mentors to me through their books & blogs & podcasts. Thanks for all the good you and your family do as well as the many others out there!

Me too. Their books are great & they are great examples to me.

Amazon is already out of stock! Sad! I hope more copies will be available soon and in time for Mothers day!

We love your blog and have been reading it for many years! My friend and I were talking about your post today. We have a question…how do you deal with jealousy among grandkids and their parents? Like even the cover of the book–how were those two grandkids chosen over others. Do you all deal with jealousy or people feeling less loved than others in your family?

So interesting to me that you assume with such confidence that your kids will get married and have kids by their early 30s making you a grandmother. I couldn't guess what my boys will be doing in their young adulthood. Pursuing graduate degrees? Traveling the world? Getting married and settling down? Working a ton climbing the corporate ladder while enjoying the single life in a big city? Their options seem limitless.

I wonder how the assumptions feel to people whose life doesn't end up following the prescribed course for whatever reason.