June 27, 2018
This summer we’ve been trying to catch up on some health things.  On some days, especially trying to figure out CPT codes and getting itemized bills, etc. for our cost-sharing program, it seems like we’ve visited every kind of doctor in the books!
Claire has been hit the worst.  She is “lucky” enough to deal with some pretty random health stuff.  That girl got get prodded and poked a bunch this month.  First she had a renal ultrasound (no pic), then we went to the hospital to have a VCUG test.  Look at that great sport: 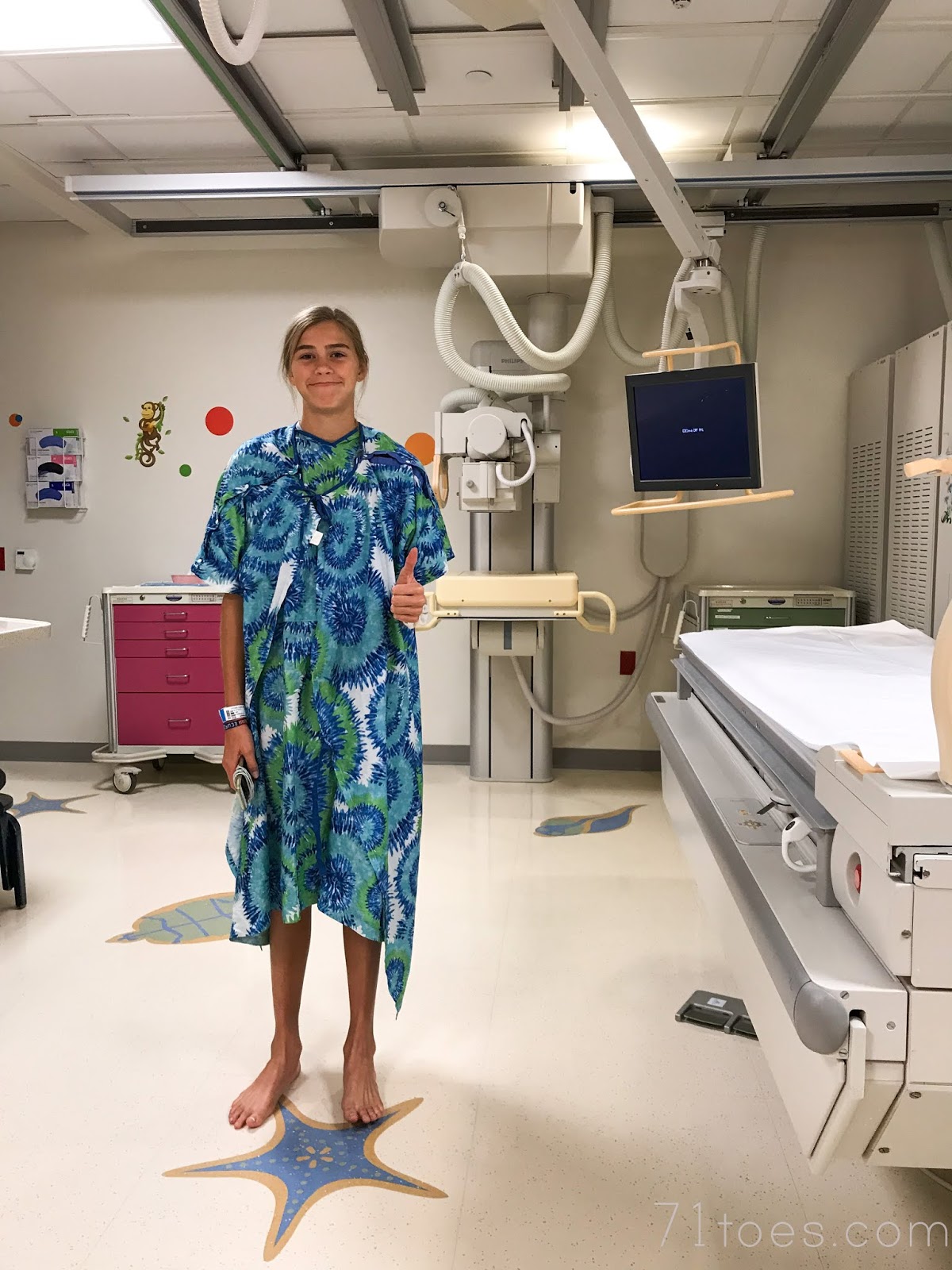 I’m pretty sure you have to have frozen yogurt after something like that. 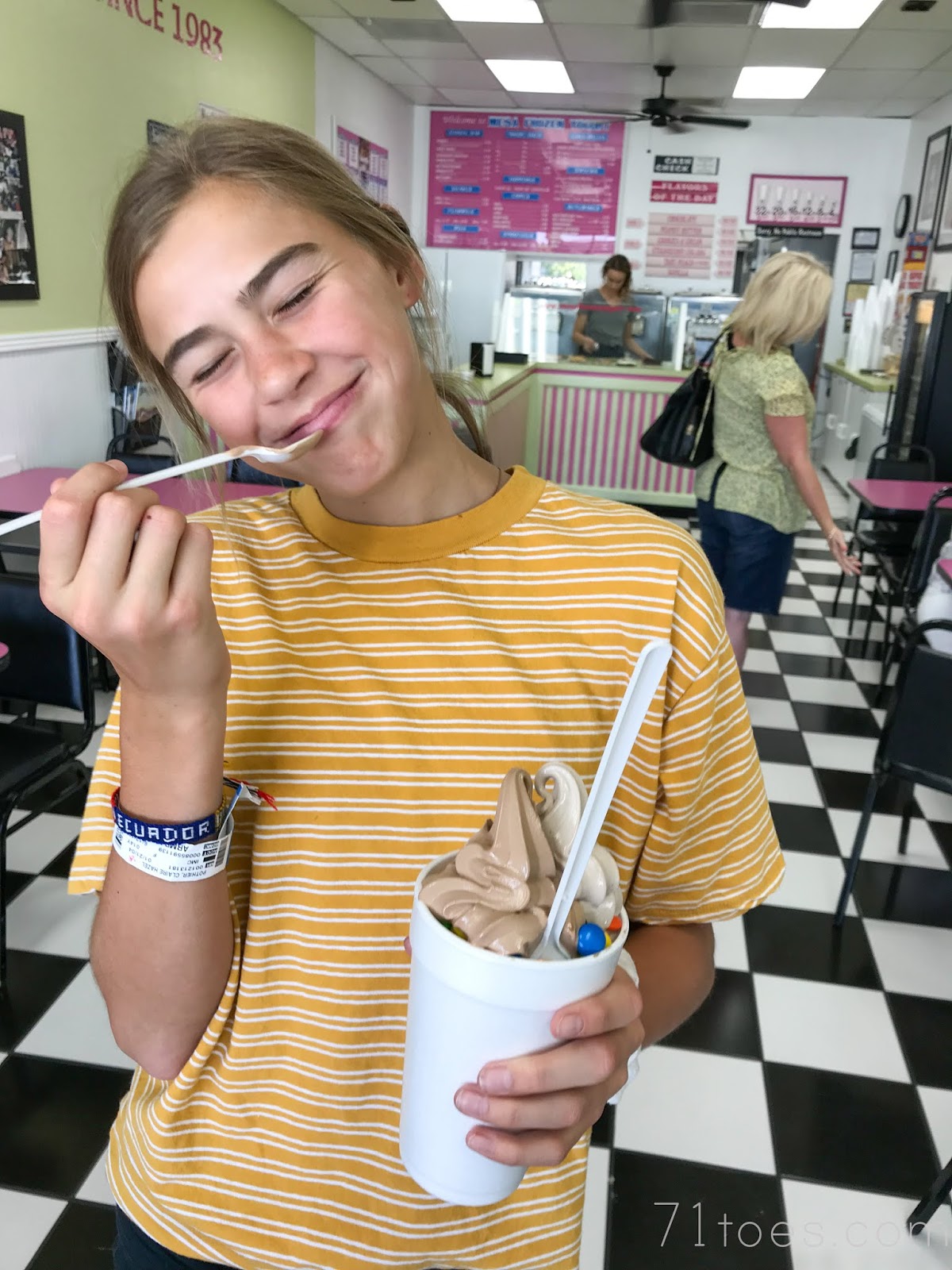 She’s had an umbilical hernia since she was a baby.  It doesn’t bug her, but a couple doctors have mentioned it’s better to take care of it sooner than later.  You have to do something like that between sports (it’s a pretty simple surgery, Max had to do it to, easy peasy, but you have to take six weeks off from any sports).

And this girl doesn’t stop with sports.

We figured we’d do it near the end of the summer before sports started up since she is on a summer volleyball league: 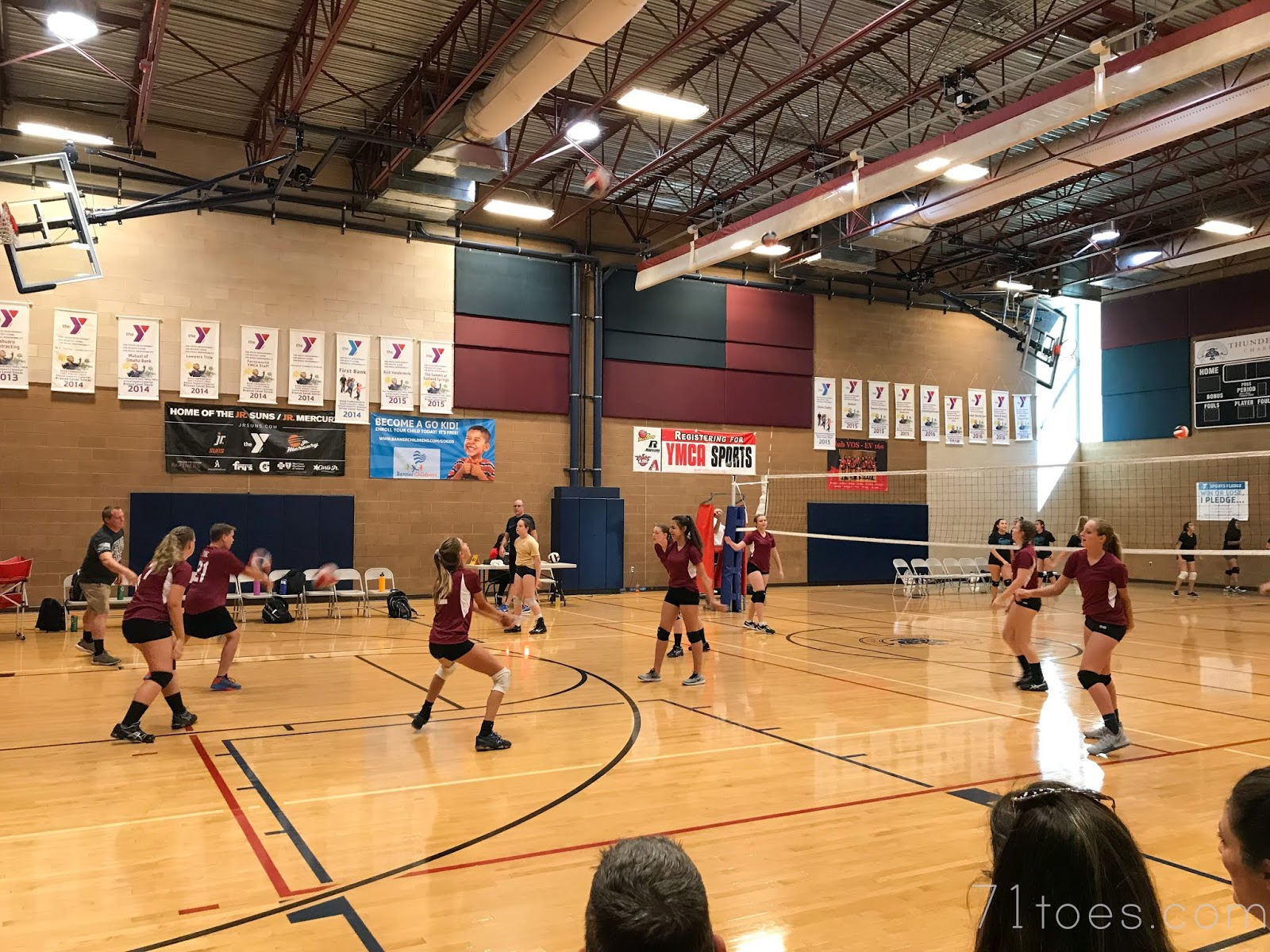 …and was also doing those 5:30am practices every morning at the high school: 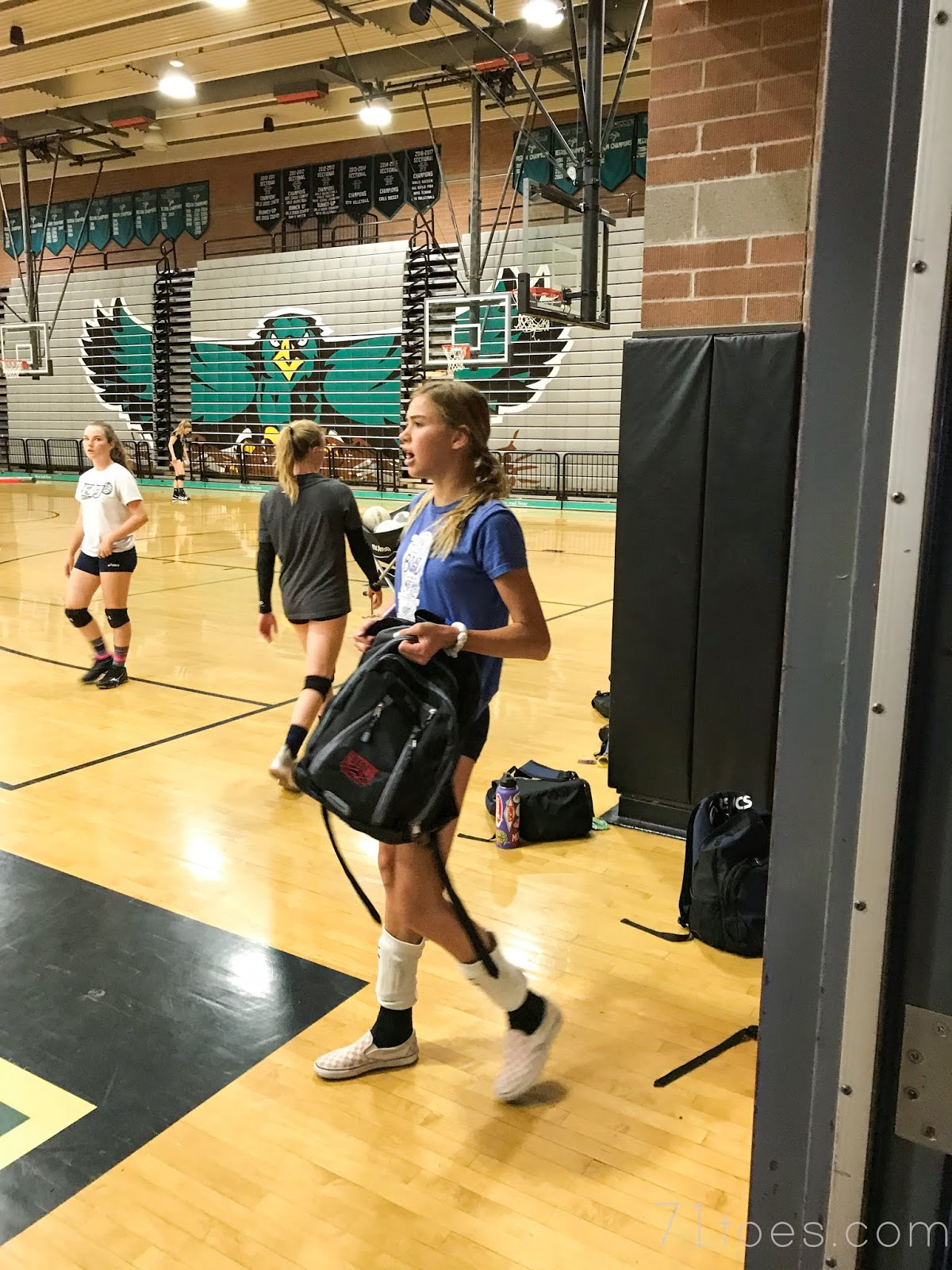 But then in one fell-swoop we found out volleyball tryouts were the first week of school (we’re new to this girls’ volleyball thing), and there happened to be an opening in just the right time frame to be done by then.  (School starts on August 2nd in these parts…boo!)
So we scheduled that thing, resigned to the fact that at least she got one game in for her summer team.
As fate would have it, that girl popped out with a giant cold sore a couple days before the surgery.  They were a little worried about that…having a virus isn’t so good when you’re going under.  But they still told us we should show up fasting at noon the next day and they’d check out the cold sore to see if it was too big to know how they felt proceeding with the surgery.  I was pretty sure it was “too big”…that poor girl is like me with cold sores inflating that bottom lip into a balloon!  Plus she had taken ibuprofen without knowing she shouldn’t for a week before.  We had a few strikes against us. 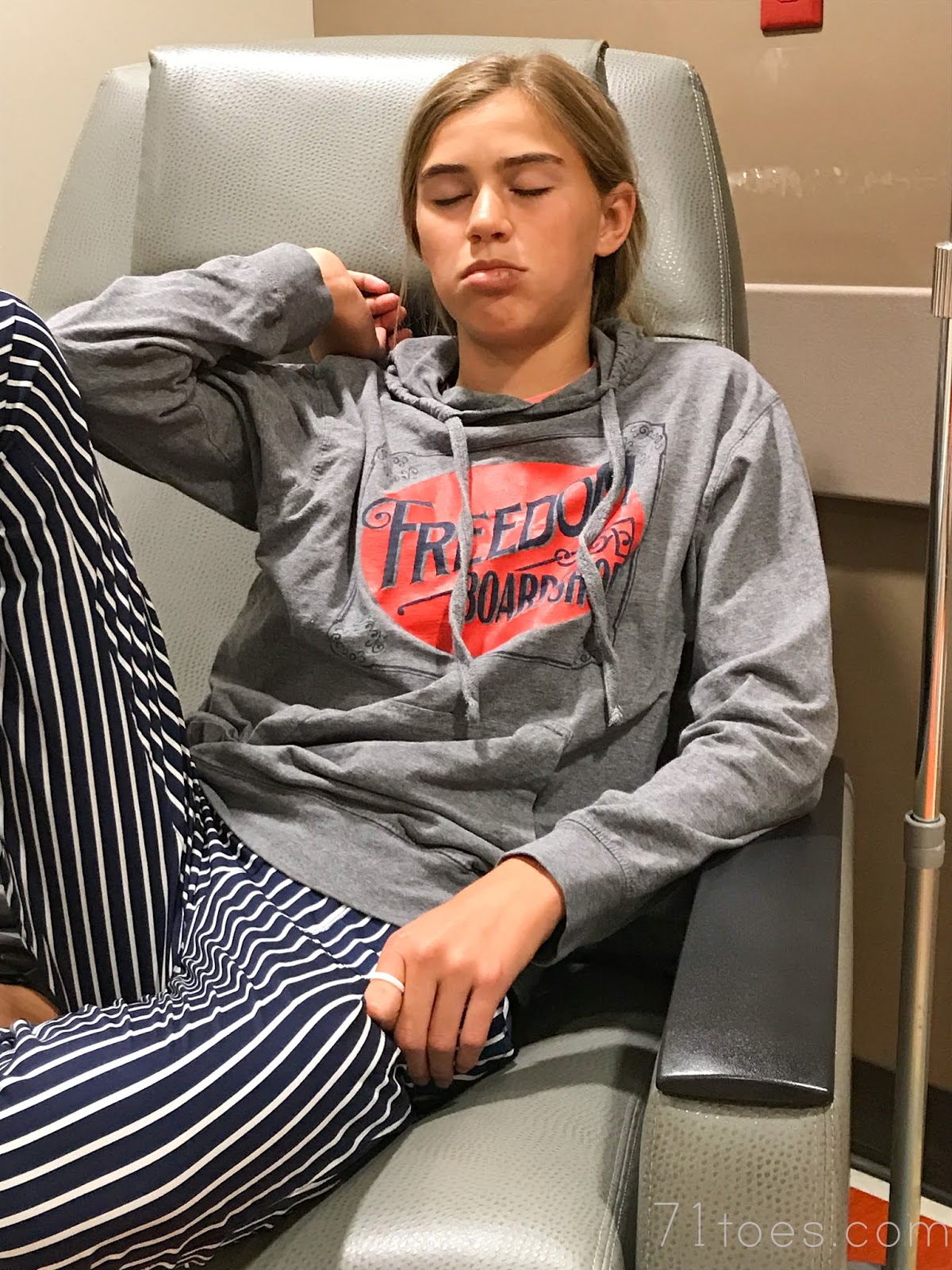 (I should have taken a better pic. of the magnitude of that thing…it was large.)
But, after lots of waiting, we got the green-light approval from the anesthesiologist and the doctor and I got to be the “hand-holder” once again with Claire as the nurse stuck her IV.  The surgery was on and I was nervous.  I’m a born worrier so I would worry no matter what…it’s never easy to send a child off to be put to sleep.  But I was especially worried about that cold sore and how it could eventually cause some worst-case scenario things the doctor had outlined when I prodded for more information.
So I felt my whole body release the stress when the doctor came out with a smile and told me all was well.  Claire was loopy and funny coming out of the anesthesiology as the nurse and I packed her gently into the car.
Sure love this good girl: 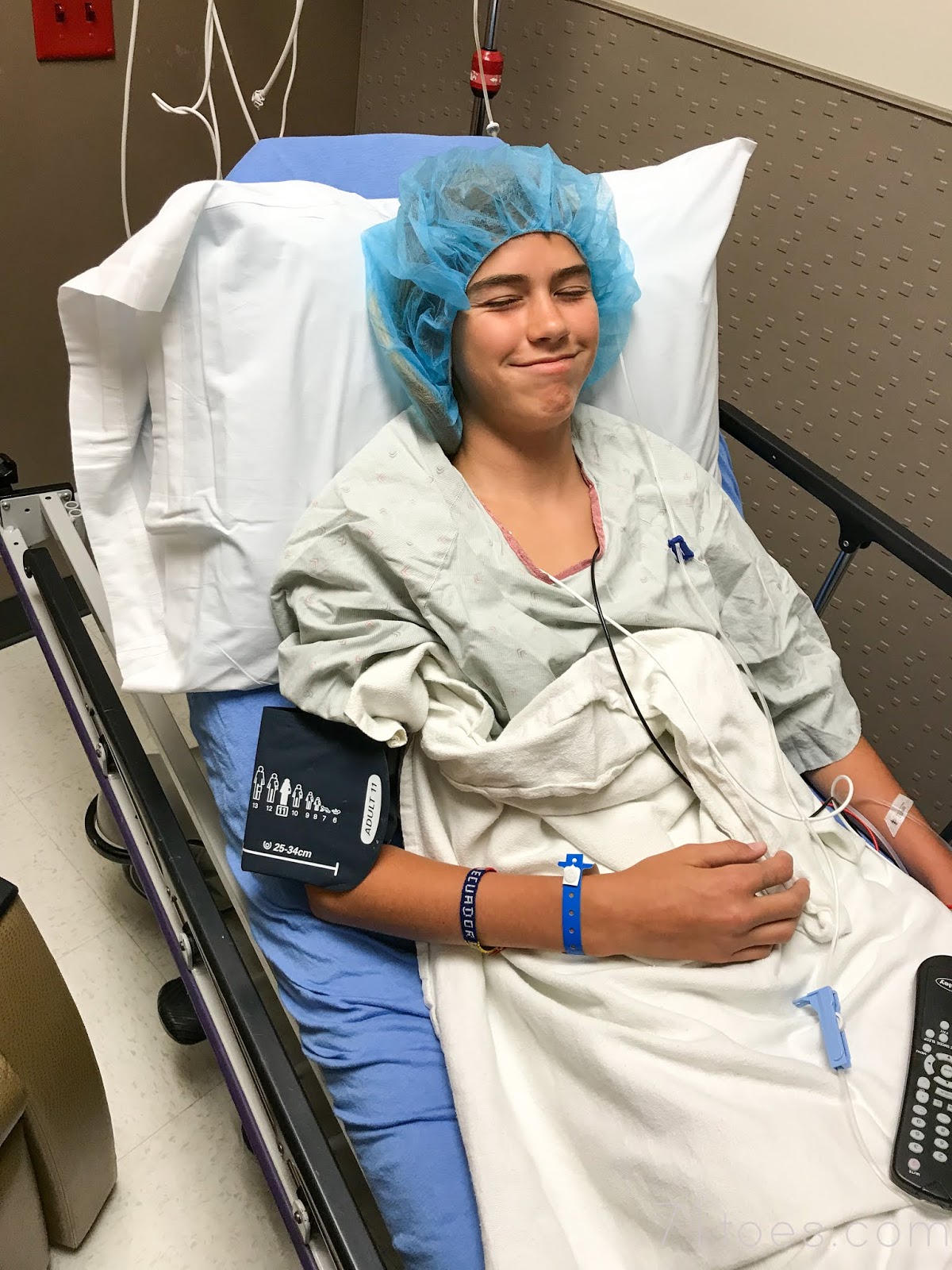 Now she’s being diligent not “submerging” herself in water and laying low, which is tough in the summer time.
But never fear, she got some good stuff in before that surgery: 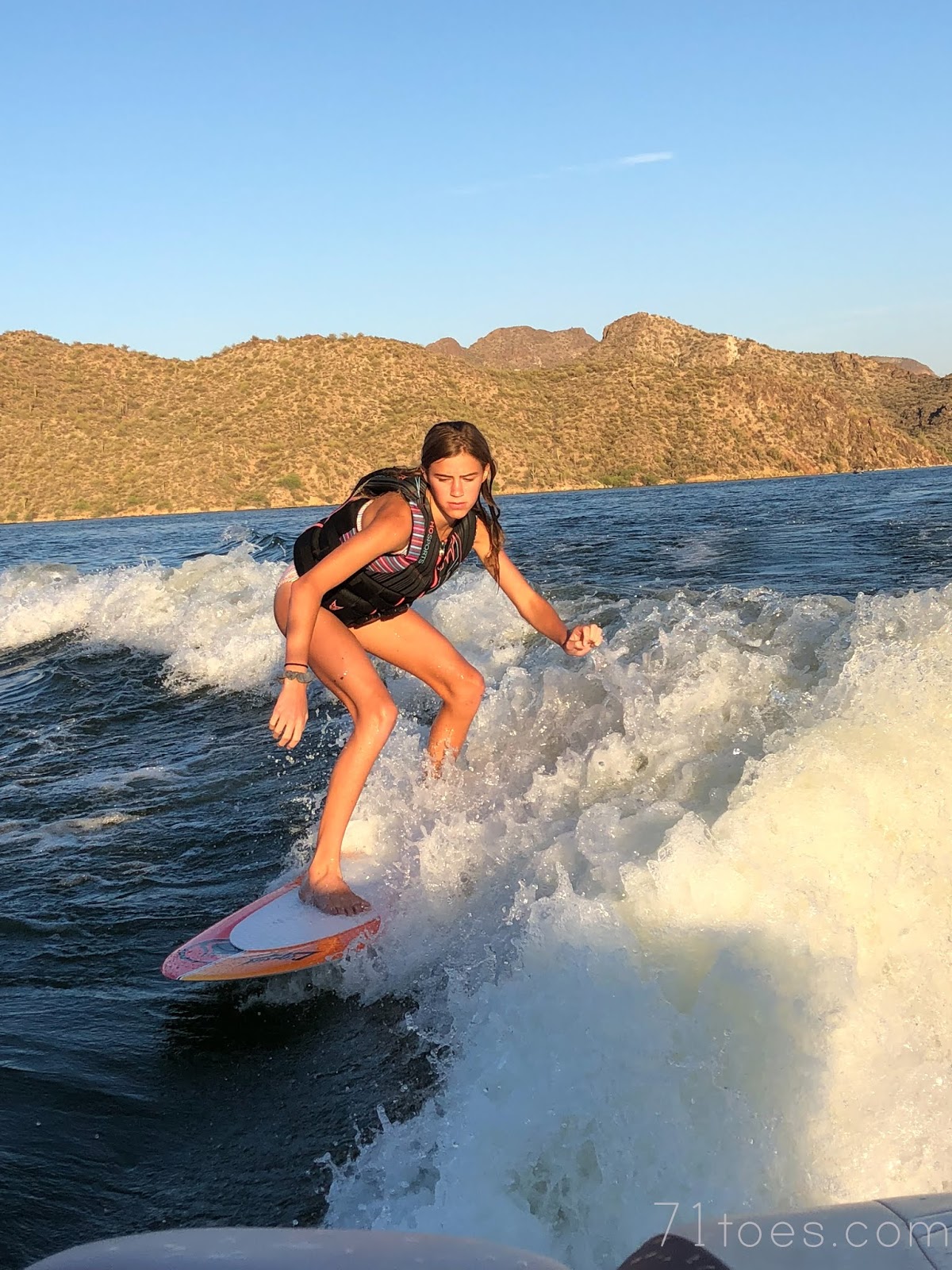 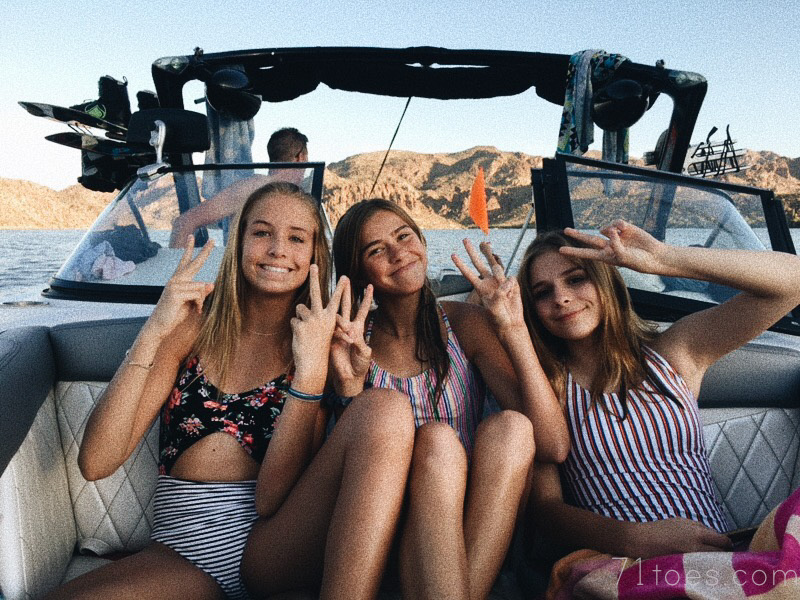 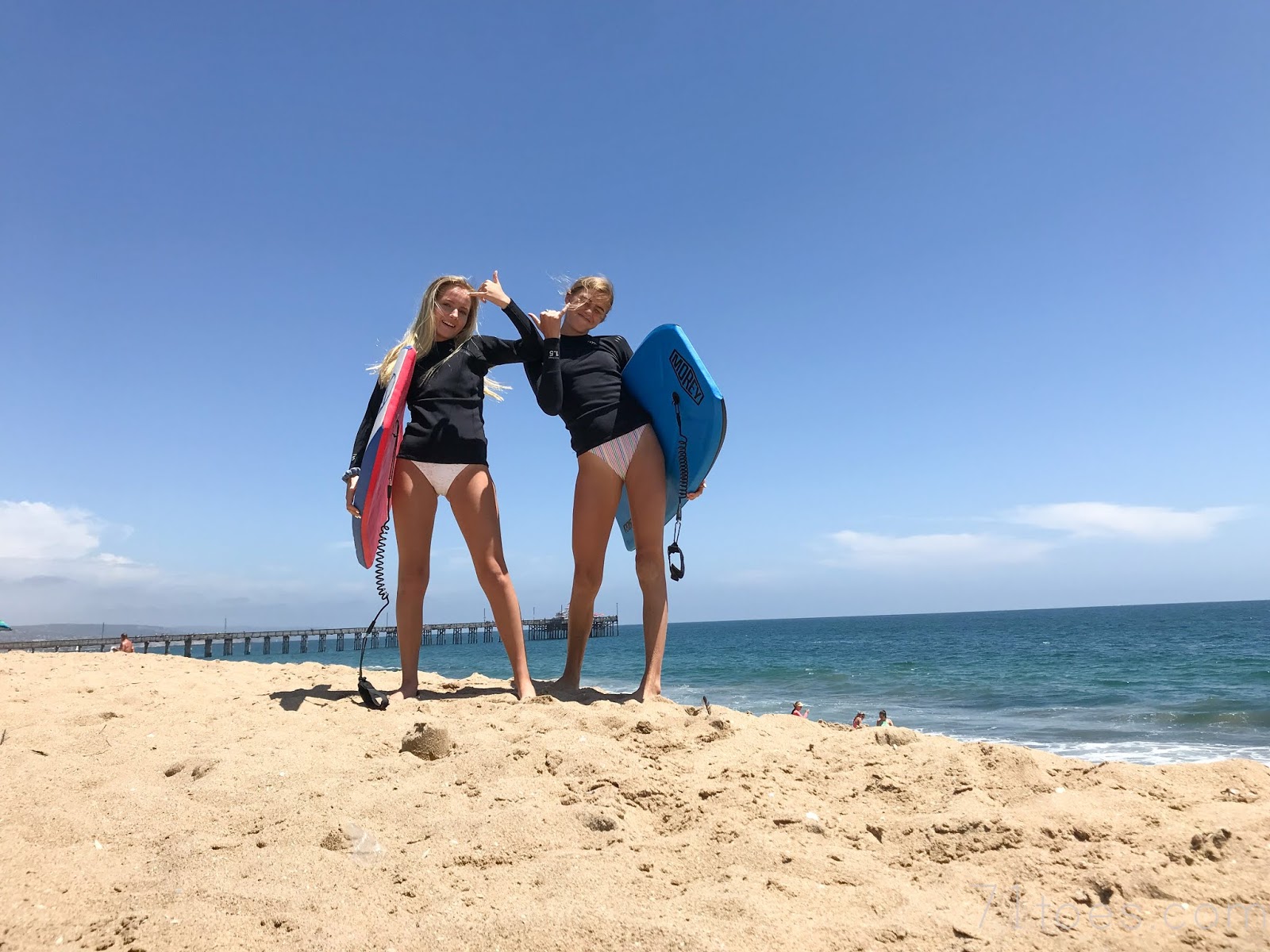 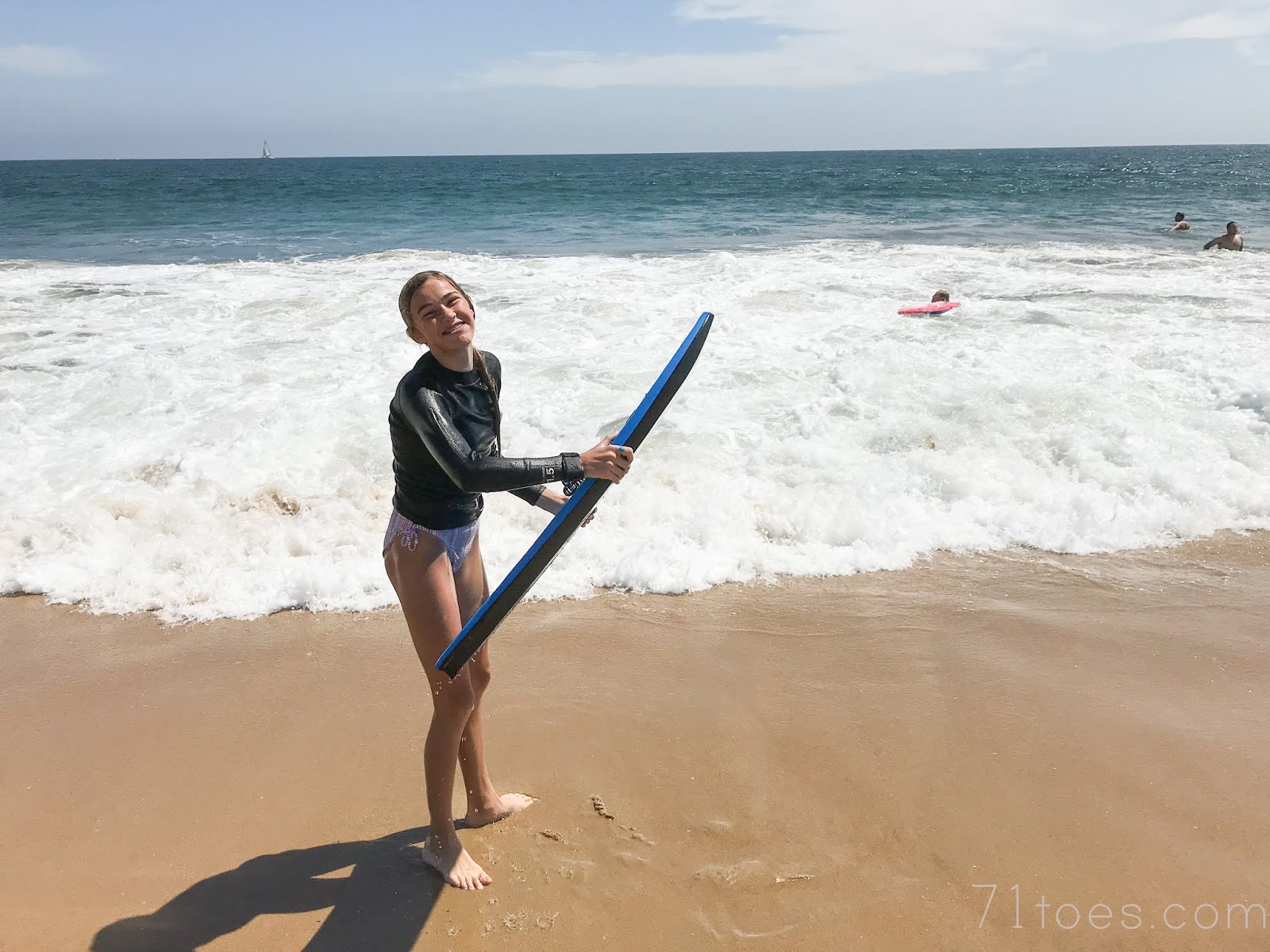 Poor Claire. I must say, though, that when I was Claire's age if my Mom posted this info and these pics of me on the internet (there was no internet back then!) I would have been horrified. You talk about their self-esteem but then post stuff like this… them at their worst… and thank you SOOOOOO much for not posting a close up pic of her giant cold sore. Wow.

You do realize no one is pointing a gun at your head, forcing you to read this blog… right? That being said, if someone is, that’s very concerning and you should have someone call the authorities for you.

I like this blog. I like the recipes, I like the ideas for family fun and travel. I even like the commentaries on social media and raising kids. But, without all your sarcasm and without insulting me…. does a post like this boost a teenager's self esteem? I expressed my opinion that it does not. And since Shawni said she is worried about her children's self esteem… maybe she did not realize this… and this is all the defending of myself and my comment I'm going to do.

I'm glad Claire was able to get her surgery and hope she has a quick and successful recovery. Hopefully she'll be back in the water, and back on the volleyball court in no time!

Glad you were able to squeeze the surgery in. Lot of times anesthesia won't sign off because there is a bit of risk to them as well. (you might see about getting her started on Valtrex at the very first sign of a cold sore–shortens the time of it and helps with the crummy viral symptoms) Shawni: mom to mom: I agree with the posters above. Kids medical stuff is very private: urinary testings, hernias, cold sores. Teens feel exposed and vulnerable and posting such private information isn't helpful to them. Please consider keep all medical things like this off your blog. Your kids will appreciate it

You guys are very sweet to be concerned for Claire, and I so appreciate that thoughtfulness. I never post anything here that my kids would be concerned about. Some of them prefer I don't post certain pictures, so I don't, but for the most part, they all couldn't care less. Just rest assured they read this blog all the time and they really like it. Claire just told me she thinks she looks "hot" in these pictures (very tongue and cheek…she's kidding about the hotness of course, but she's a girl who is so low-key and comfortable in her skin). I guess none of us are very private around here! But again, I (we) do appreciate the concern and care.
xoxo

You see what almost everyone else does is take a 6- 10 week break from sports and other commitments to fit in procedures and surgeries. It’s a hard decision to have to do one less sport in a year.

I feel that most people that blog (I'm not a blogger, so just my casual personal impression) do so first and for most for their family. They want to record all the little things and all the big things to remember. It's quite personal and yet they have a heart to share these posts with the world. Perhaps to provide some insight, goodness, and find those that can totally relate. I think it's wonderful to be able to read another mama's blog and hear the struggles, be inspired, learn a few tips, and be allowed to glimpse into their world. It's a privilege. I find myself very inspired, encouraged and implementing similar ideas from the examples in how they live their life. I understand the well intended concerns for Claire (I have two daughters) but also point to the mama or teenager reading this that will be encouraged and that needed to see such a honest post. I fear too many shy away from being transparent and simply post their best pictures and claim all is well. I trust Shawni knows her kids and protects them. I appreciate this blog so much. Thank you!!

poor Claire! That is a lot of medical stuff to deal with. Our little Vera Claire (2) had urinary reflux and is no stranger to those VCUG's. As a Mom it is just awful watching your child go through that. I hope you found some answers there and glad she could check off one surgery. We had to do surgery in our case but she has been a new kids full of energy since. Prayers for a speedy recovery.

This was addressed a few posts ago. Shawni said she asks the kids if things are ok to post!!! So don’t worry !��

So great that Claire knows and Shawni too! Cold sores, and whatever else happens to us-acne, scars, weight…. do NOT change our beauty. Beautiful family inside and out.❤️❤️❤️

For other medical providers who limit the services provided or the amount of patients accepted whose file is secured by a medical lien, are forced to do so because of the lack of guaranteed compensation combined with the shear length of time involved in achieving compensation. see this

Thankfulness to my dad who informed me relating to this blog, this website is really amazing.

Claire has been hit the worst. She is "lucky" enough to deal with some pretty random health stuff. That girl got get prodded and poked a bunch this month. First she had a renal ultrasound (no pic), then we went to the hospital to have a VCUG test. Look at that great sport:

My friend mentioned to me your blog, so I thought I’d read it for myself. Very interesting insights, will be back for more! blouse back neck designs

the divider and littler candidates are applying to medicinal school. buymodafinilgeneric.com

Rising human services spending is driving a triple emergency in U.S. human services; the vanishing of boss based inclusion.my-tramadol.com