August 4, 2018
The beginning of school was weird this year.
Along with the process of preparing for that first day I had an interesting epiphany.
Yes, those “first days” shift and heave and settle a little differently every year, but this year was the most quietly strange first day yet.
Don’t get me wrong, it was a good one, and the girls came bursting in the door, flushed hot from the desert heat and shining with the glory of all the first-day things they had to spill out to me.
I mean, Claire is a FRESHMAN for crying out loud. 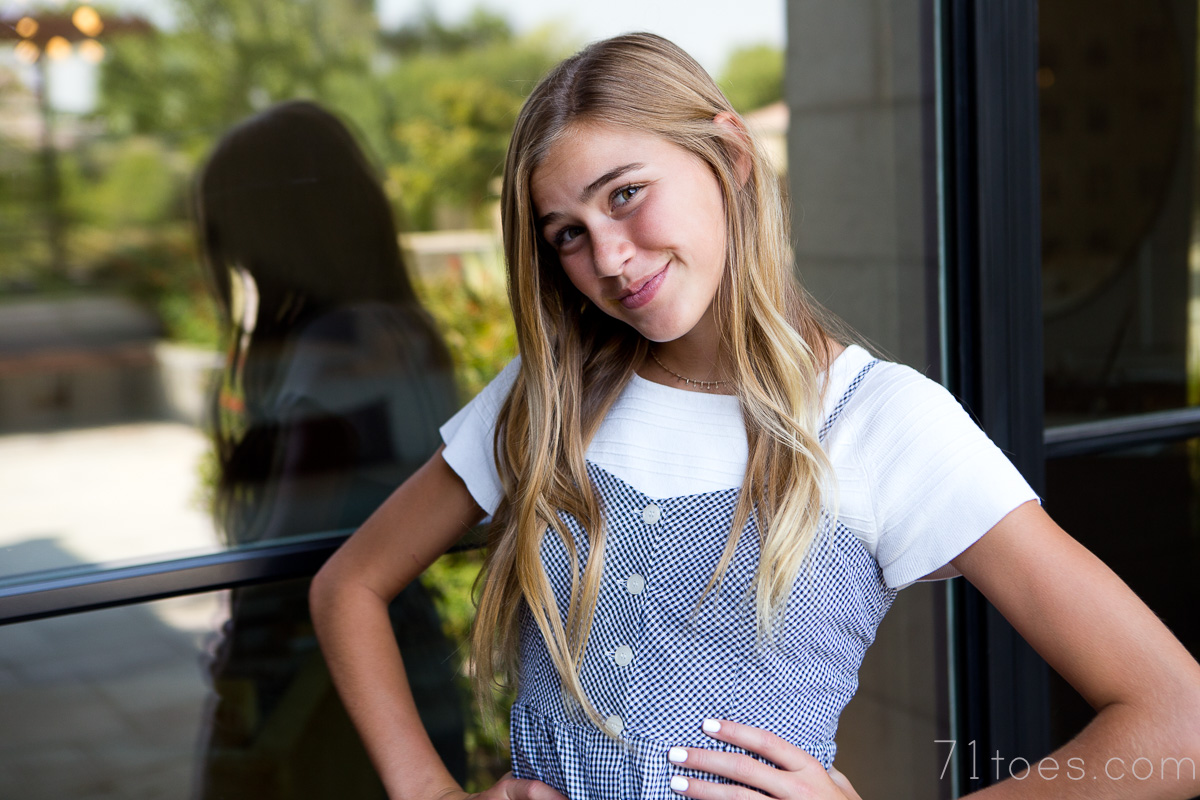 …and there’s nothing normal or mundane about that.  It’s about the coolest thing that’s ever happened to her in her opinion.

And Lucy is ruling the elementary school as a sixth grader. 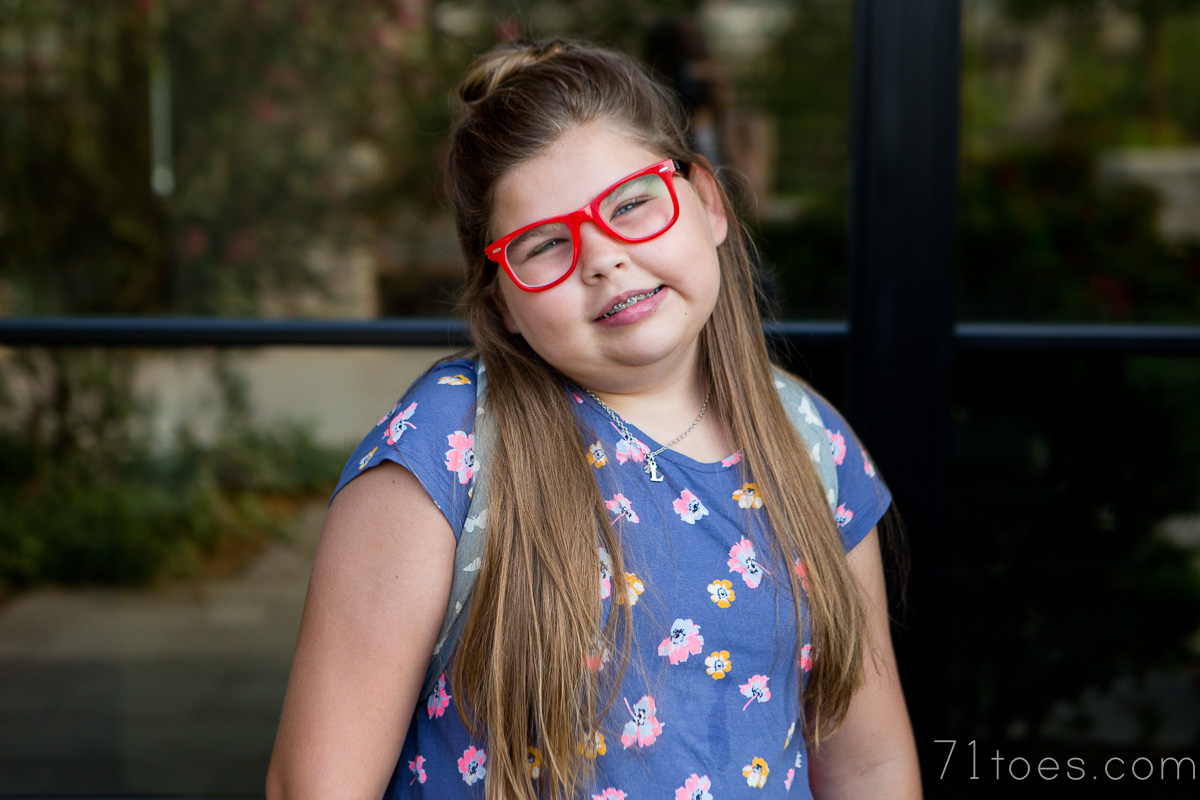 Which, at least for now, has been quite glorious.
But there was a huge hole where Grace was supposed to be as a SENIOR.  She was still in the Dominican Republic working in a school there, Elle and Max are of course long-gone, so I had only two children at home and the house was so quiet.  Quiet while those two girls were here, backpacks in hand and breakfast eaten, and deathly quiet after they left.
So let’s get back to my epiphany…
Dave and I got back from an extra-long date to wrap up the summer just in time for Lu and I (and some friends) to head to our last-ever teacher-list-posting at the flagpole at the elementary school. 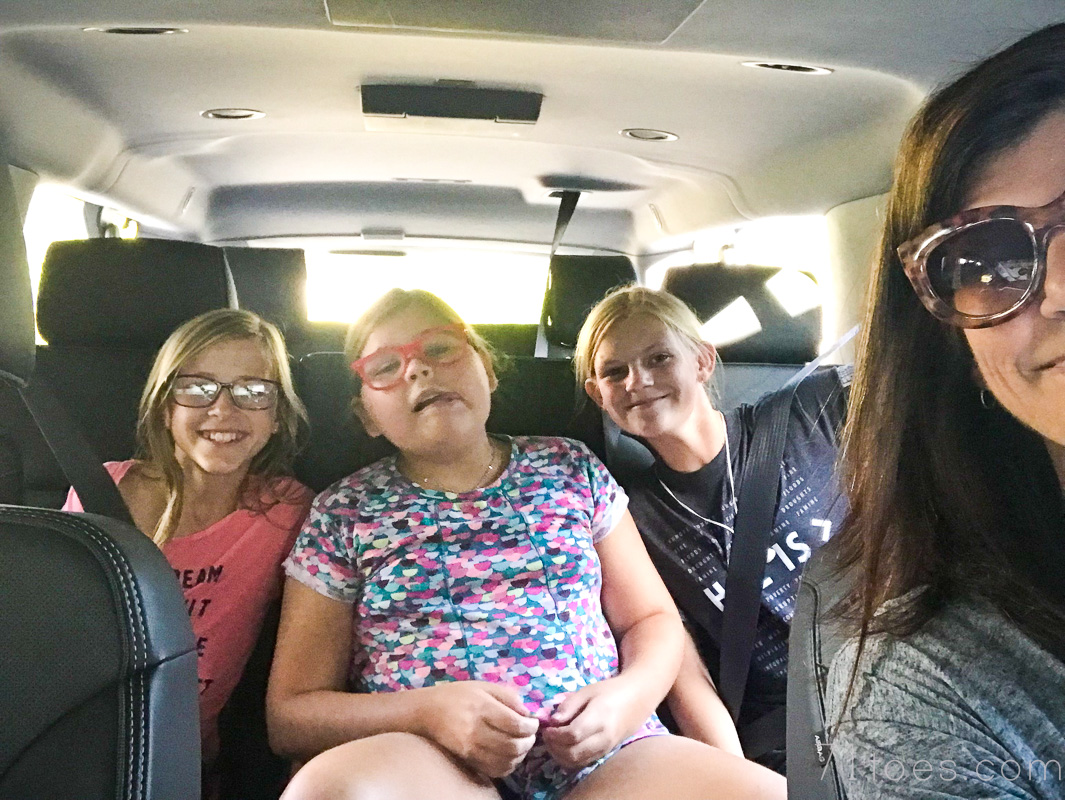 It’s become a tradition over the years to go check out those class lists together, Lucy and her friends, and even though we got emails letting us know that they would also be posting them online this year, and that we would have the liberty to check them in a spot that is not positively scorching, we went anyway.

Because you know, tradition. 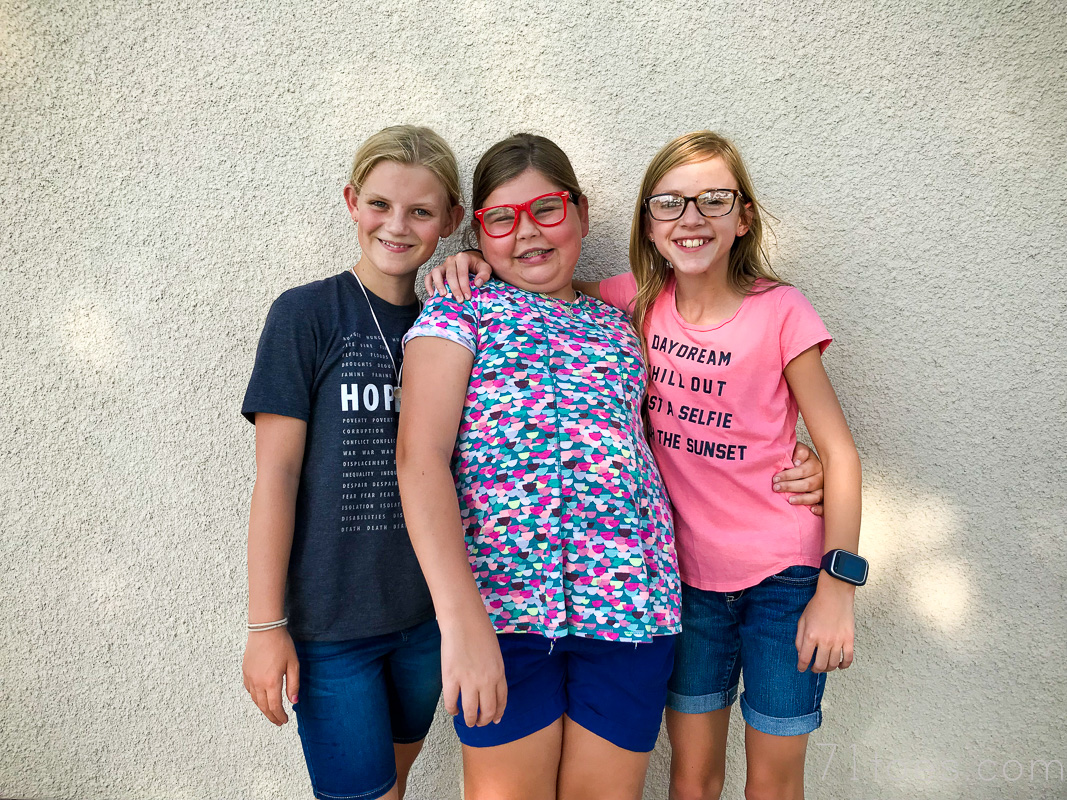 And although I was a little emotional heading in for this “last,” I was surprised at how easy it was. 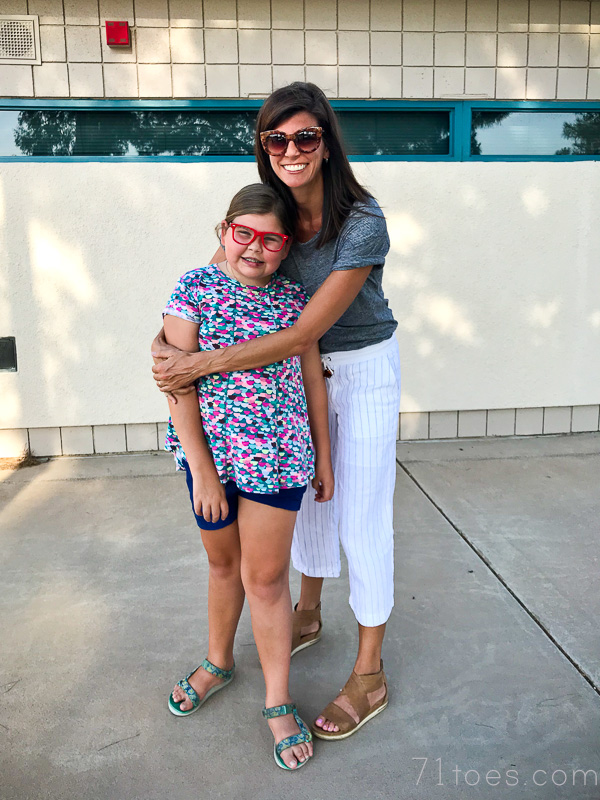 Then the next night was “back-to-school” night where we got to go meet Lucy’s new wonderful teacher. 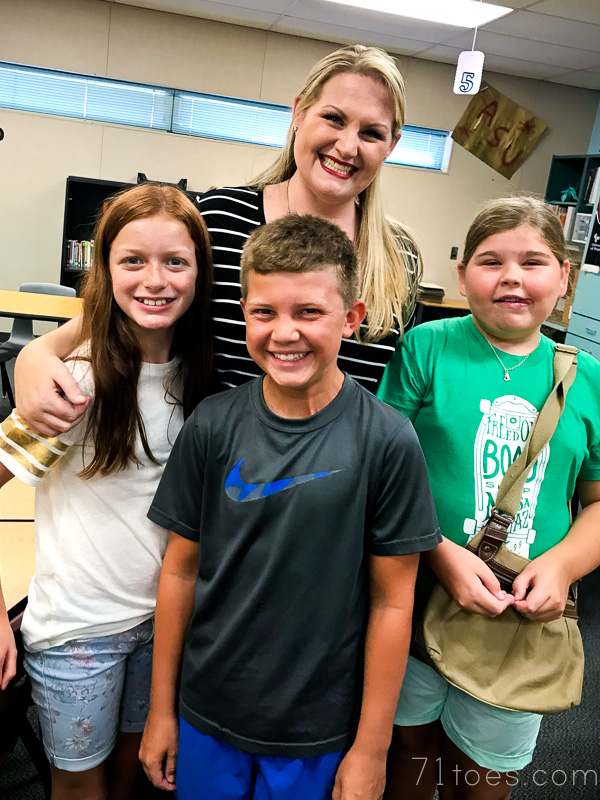 It’s a night when the elementary school is swarmed with kids and families, friends reuniting after a summer being apart, buzzing in and out of new classrooms, excitement filling the air.

I have done this now for sixteen years, starting with Max as a kindergartener.

Every single year of my school-mother career.  I have gone from lugging babies, pushing strollers, having my children practically pull my arms out of socket in so many directions at the same time, all talking at once, all begging to be the one to visit their teacher first, all while running into old friends and trying to catch up in those halls, hot and muggy from all the commotion.

And of course, not only do they want to meet their new teachers, they want to visit all of their old teachers too.  Multiplied by all five children who once walked the halls of that school at the same time (Lu was in preschool there), that was a crazy time.

So far, all those sixteen years it never got old.

The excitement of my children rubbed off on me.  I loved seeing my friends too…the other families as well as the teachers I had gotten to know so well.  It felt like I knew the majority of them and that school was so HOME to me, lined with all the goodness that helped me raise my children.

But as I walked those halls this year with my one lone-surviving elementary school girl marching along in front of me, I realized how much time has slipped by.  Sure, I’ve realized it’s been slipping by every year, but so gradually it’s hardly noticeable.  Until suddenly this year it hit.

Just like my kids are growing up, I am too!  As I looked around, all those strollers and babies and leg-clinging-toddlers had suddenly become almost foreign to me.  All those families are so young!  Or maybe I just realized I am so old! Which is so strange because part of me still feels like I’m still that mom with a baby balanced on my hip, and kids pulling me every which-way.

I’ve started that realization long ago, of course, but for some reason it hit me differently this week.

And my epiphany was that it was all ok!

In fact, it was more than ok.  Instead of being sad, mourning that those elementary school days are slipping themselves free of my grasp, I almost felt empowered.  Almost like I’m getting ready to graduate in a way.  It’s been a good ride.  One filled with book reports and agenda signing and friend drama and assemblies and class parties and class volunteering and art masterpiece, and I suddenly could allow myself to be ok with this year wrapping up that experience.  I have loved it.  I have sucked the marrow out of it.  And now I’m tired.  And that’s ok.  There are so many other worries/concerns/celebrations on the horizon with my big kids, I finally realized it’s ok to leave this life: the life of an elementary school mom, in my wake.

And that’s a pretty big epiphany for me (because, as anyone who reads this blog can attest, I’m usually a big baby when it comes to that stuff).

Although I did get a twinge of sadness when I wrote “art masterpiece” up there, because I really, really will miss that, dang it.

But the rest of it is a-ok.  That burden was interestingly lifted and shifted in those crowded halls that night of my sixteenth round “meet-the-teacher.”

And that felt good.

Of course, I was sad as usual for that alarm to go off and for the routine to start us cracking into place, for the freedom of summer to drift away from us.

But there are some exciting times on the horizon.  And this parenting gig keeps getting better and more interesting.

Ok, so enough with all that epiphany mumbo-jumbo.  Bottom line is that there we were, just Dave and I with our two girls on August 2nd (still the middle of the summer in my opinion), with school claiming the majority of our days once more.

And I was ok with it all.

Dave whipped up pancakes, and forgot they were supposed to be “rainbow” ones, and no one threw a fit. 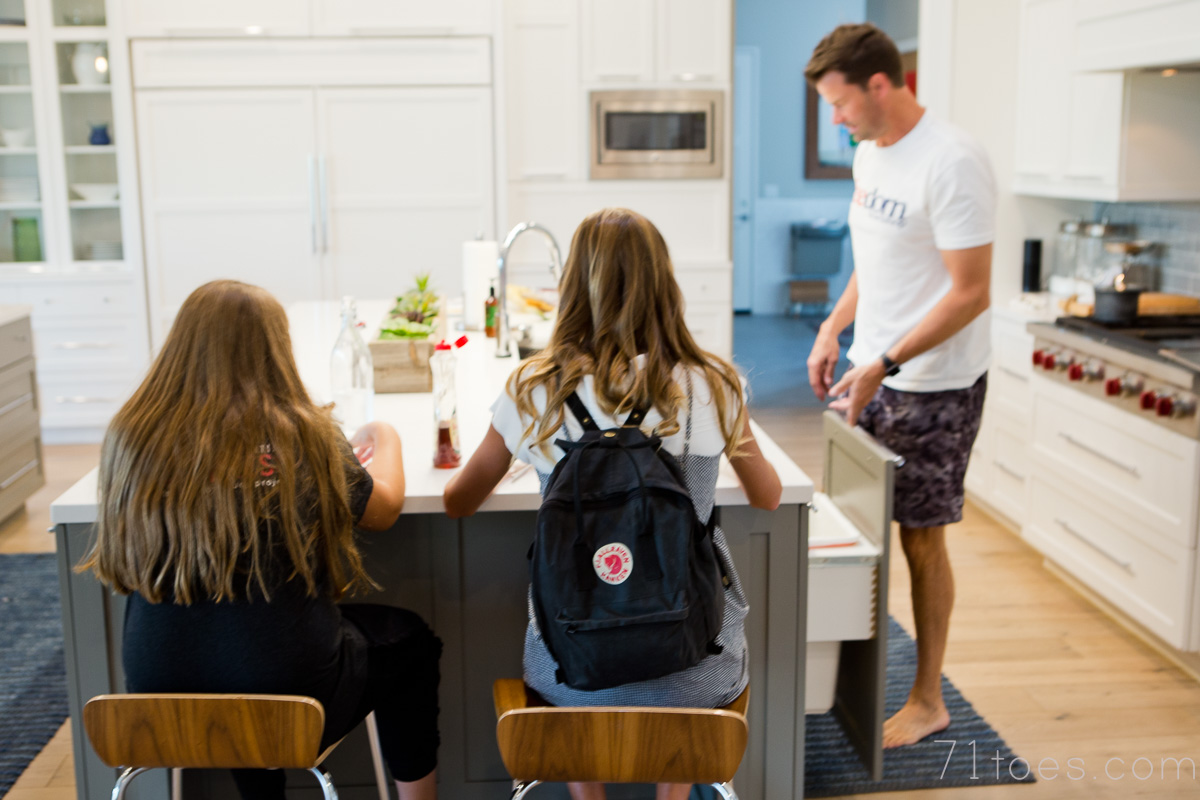 Those girls marched off with minimal supplies…they’ve finally come to reason that really, it’s better to wait until after the first day to get the majority of the paraphernalia they need because those class lists always change, and nothing really happens on the first day anyway. 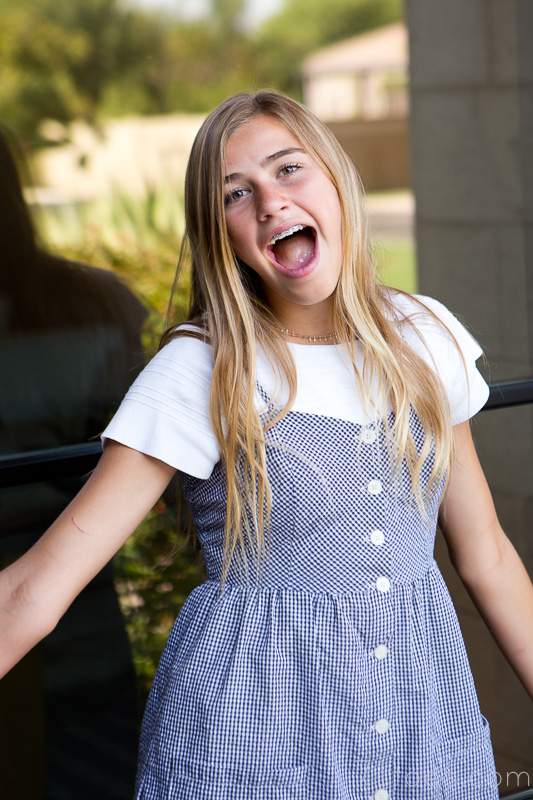 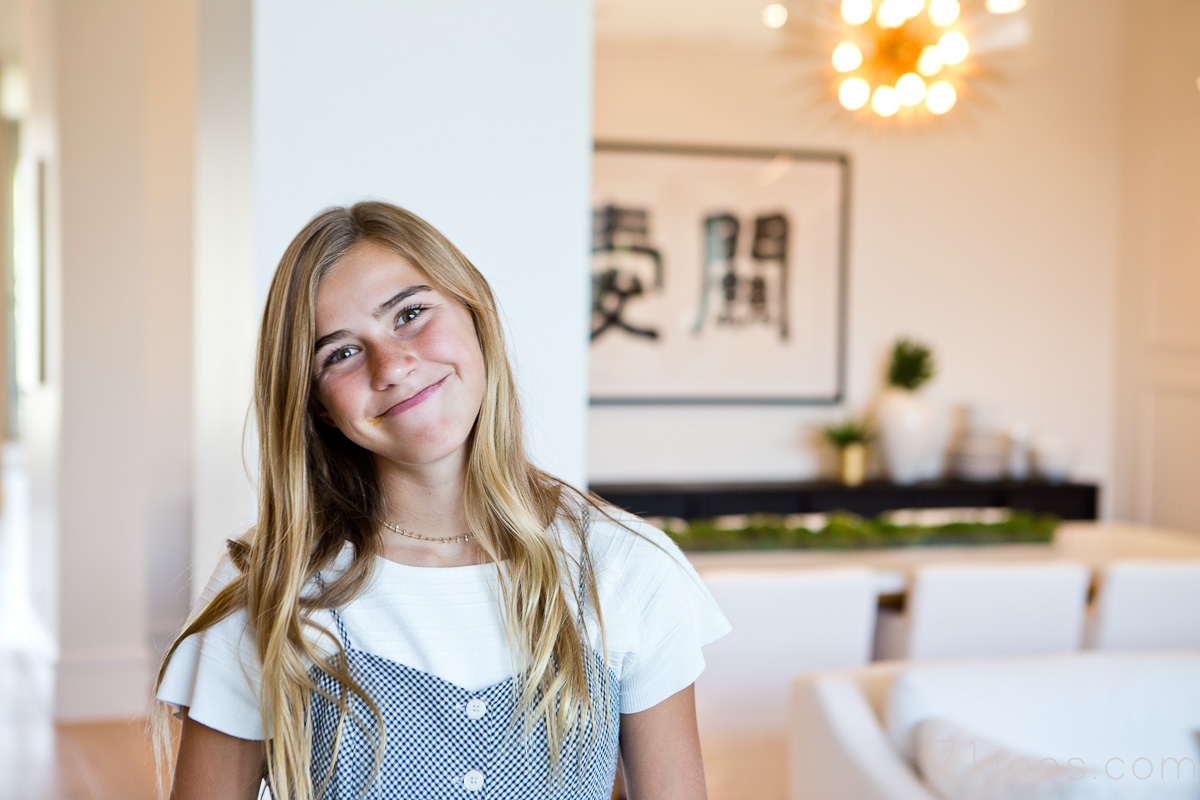 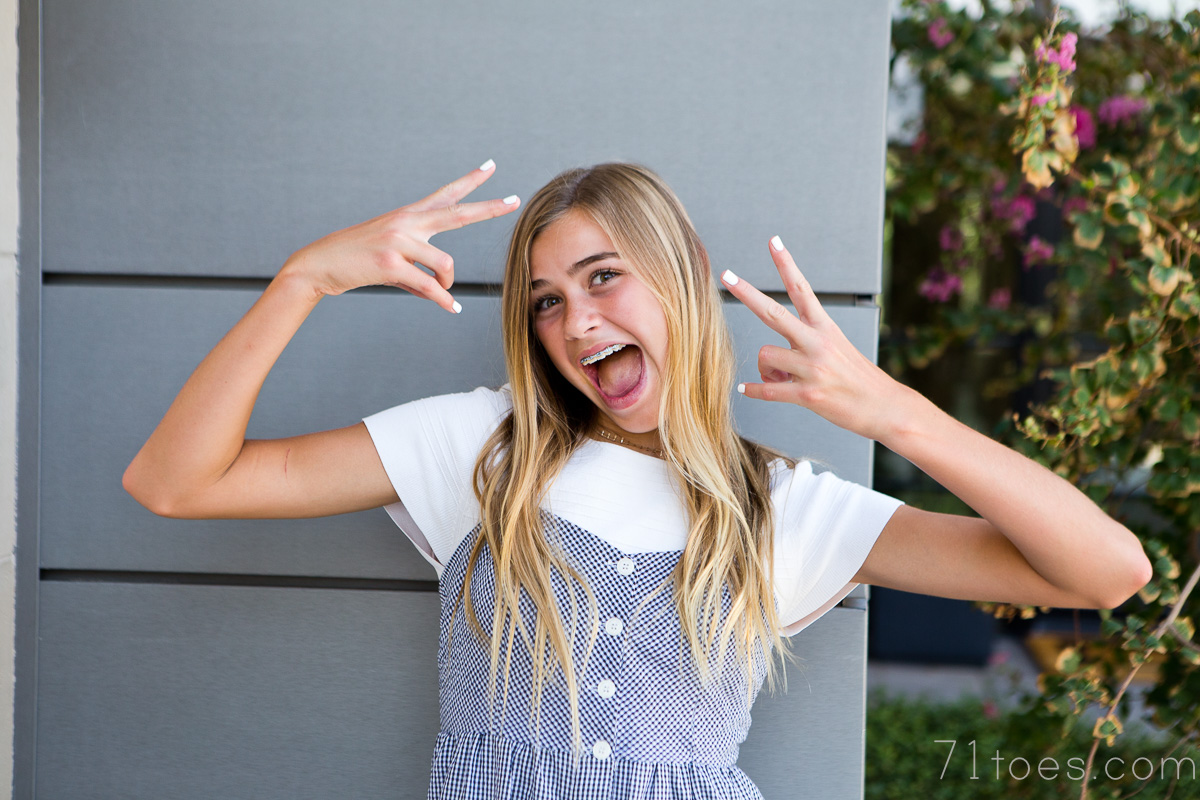 Excitement oozing out of her right along with some nervousness, heading off for HIGH SCHOOL. 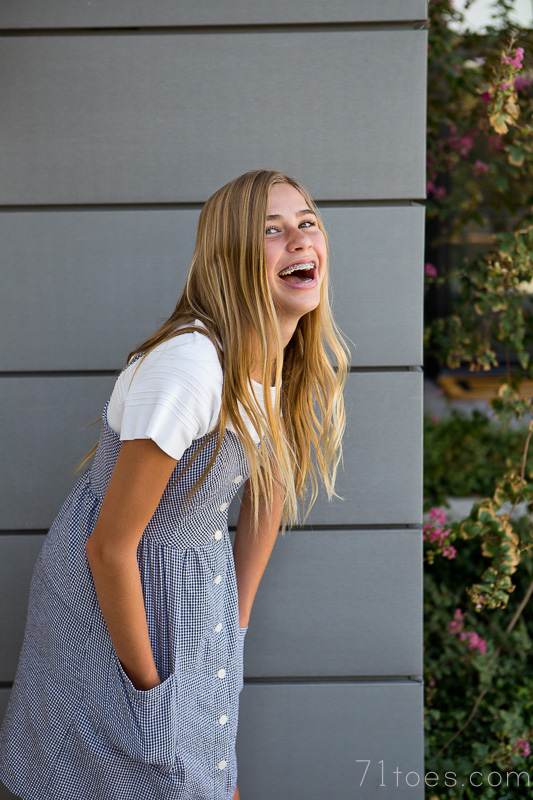 Her cute friends came to pick her up since her from-here-on-out-trusty-big-sister-ride doesn’t arrive until tonight. 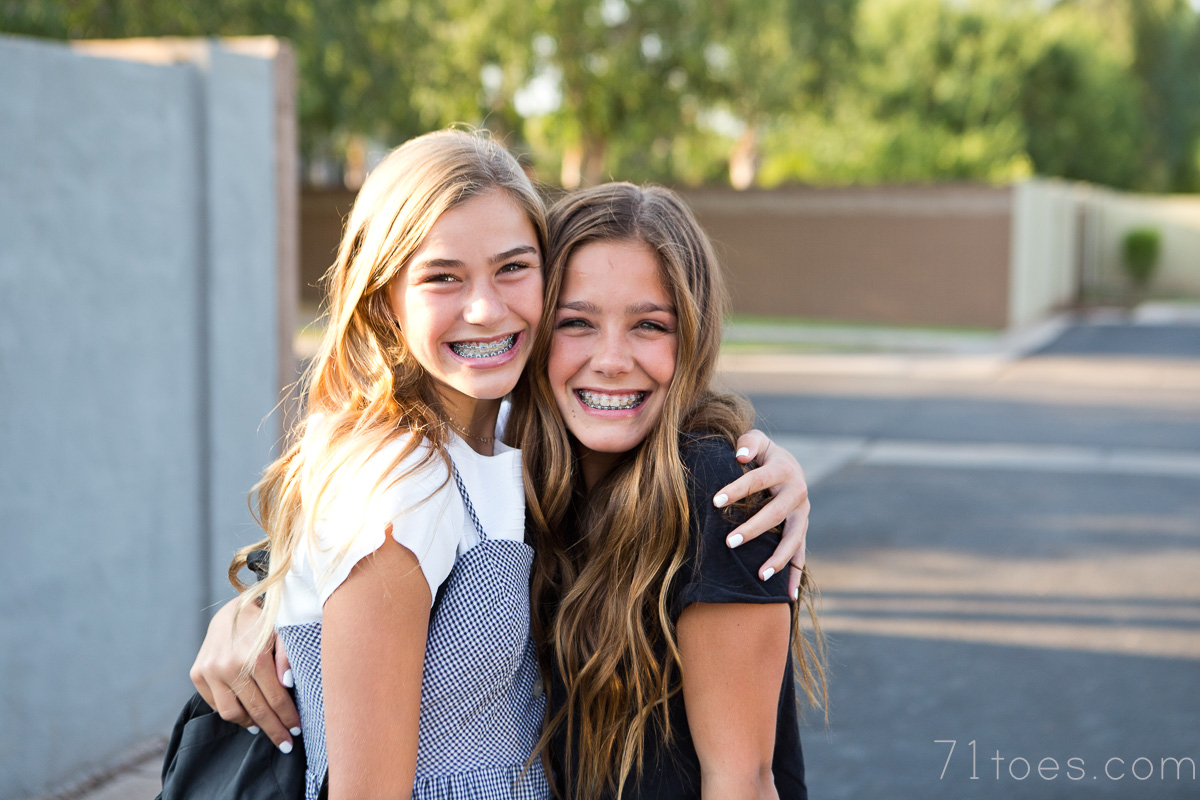 …and next up was Lu: 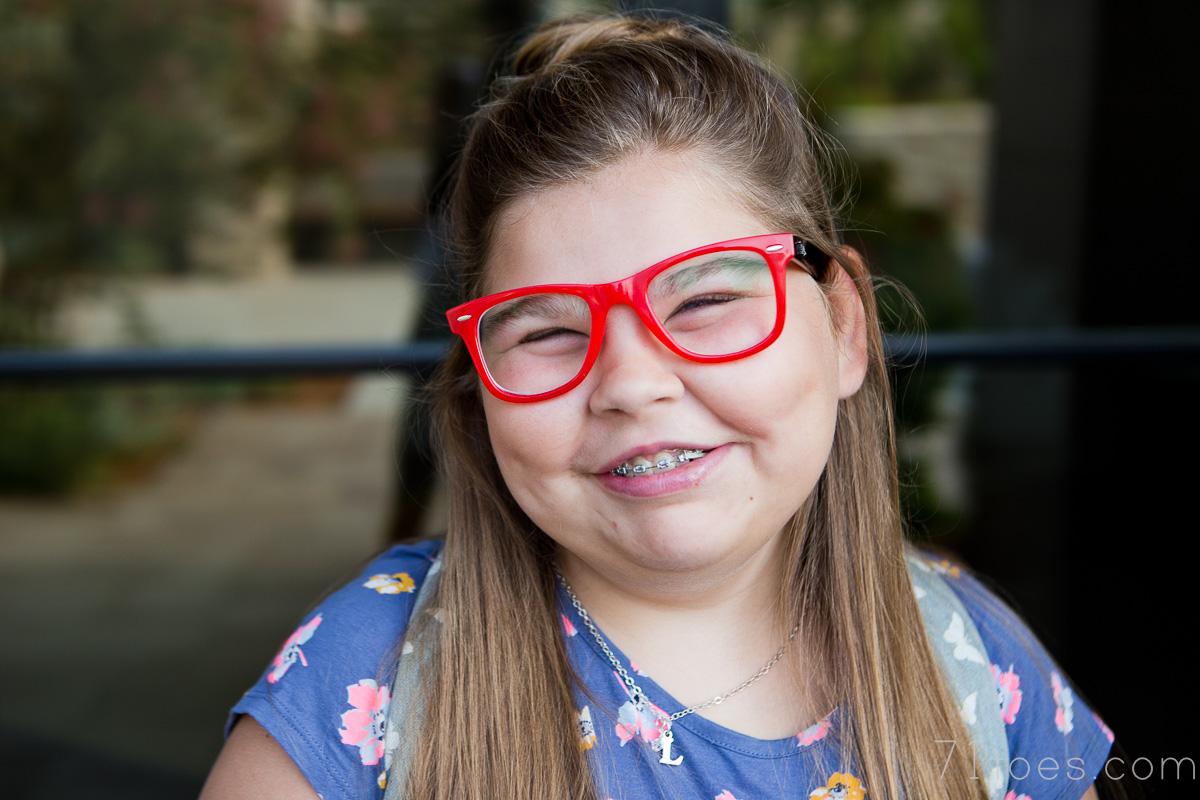 Even that was strange and unusual:)

She was pretty insistent that Bo join her for a few as well: 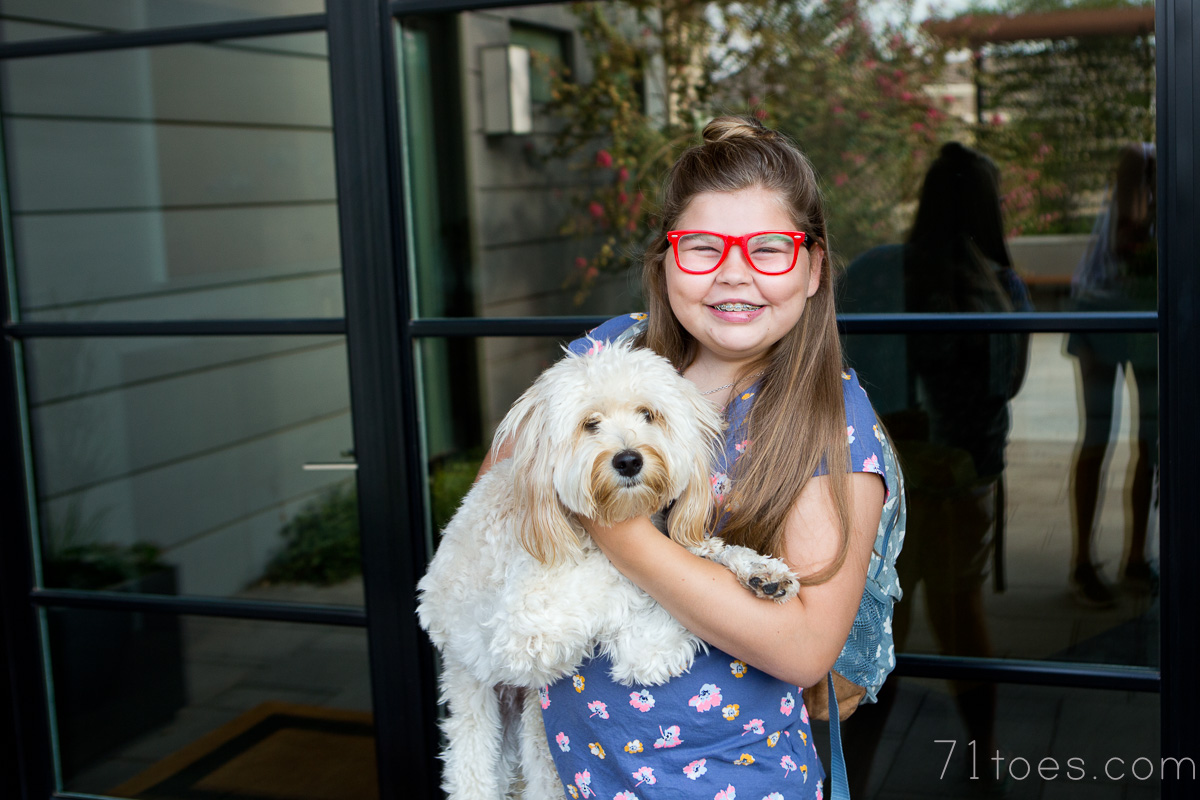 This is how poor Bo felt about that: 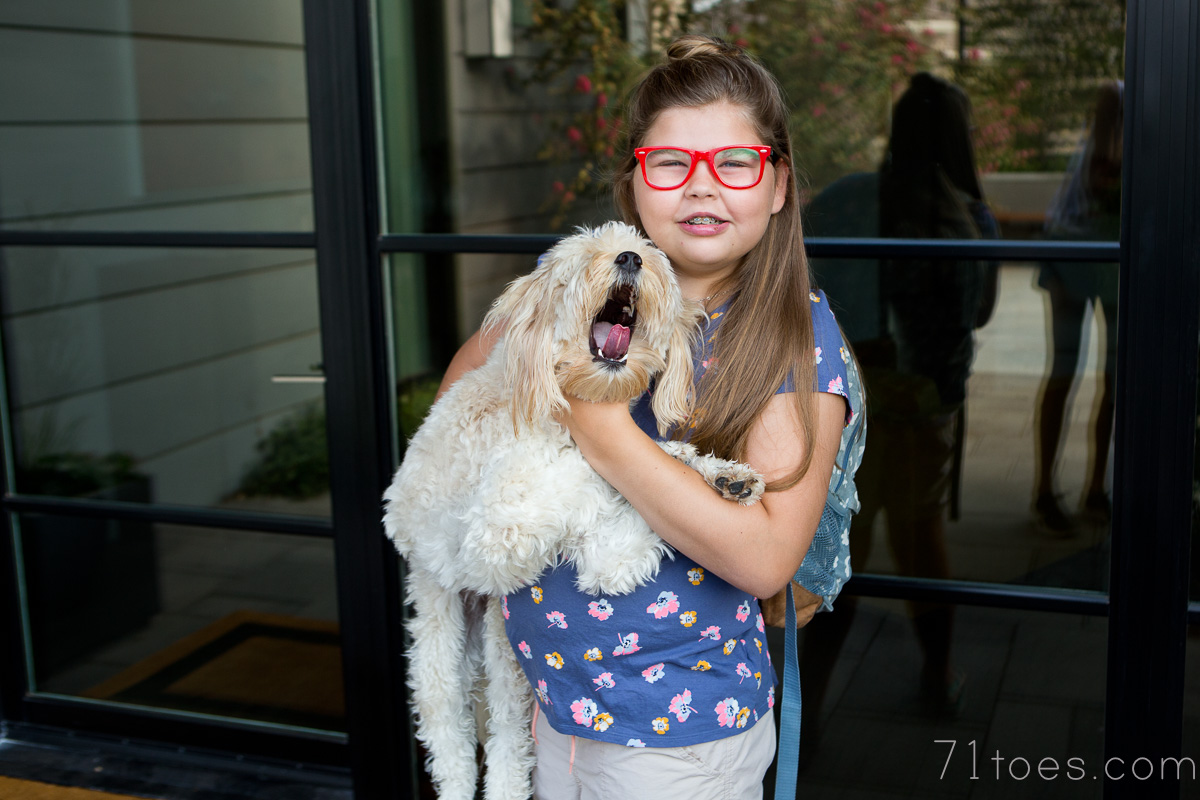 We lucked out with that dog of ours.  She’s golden. 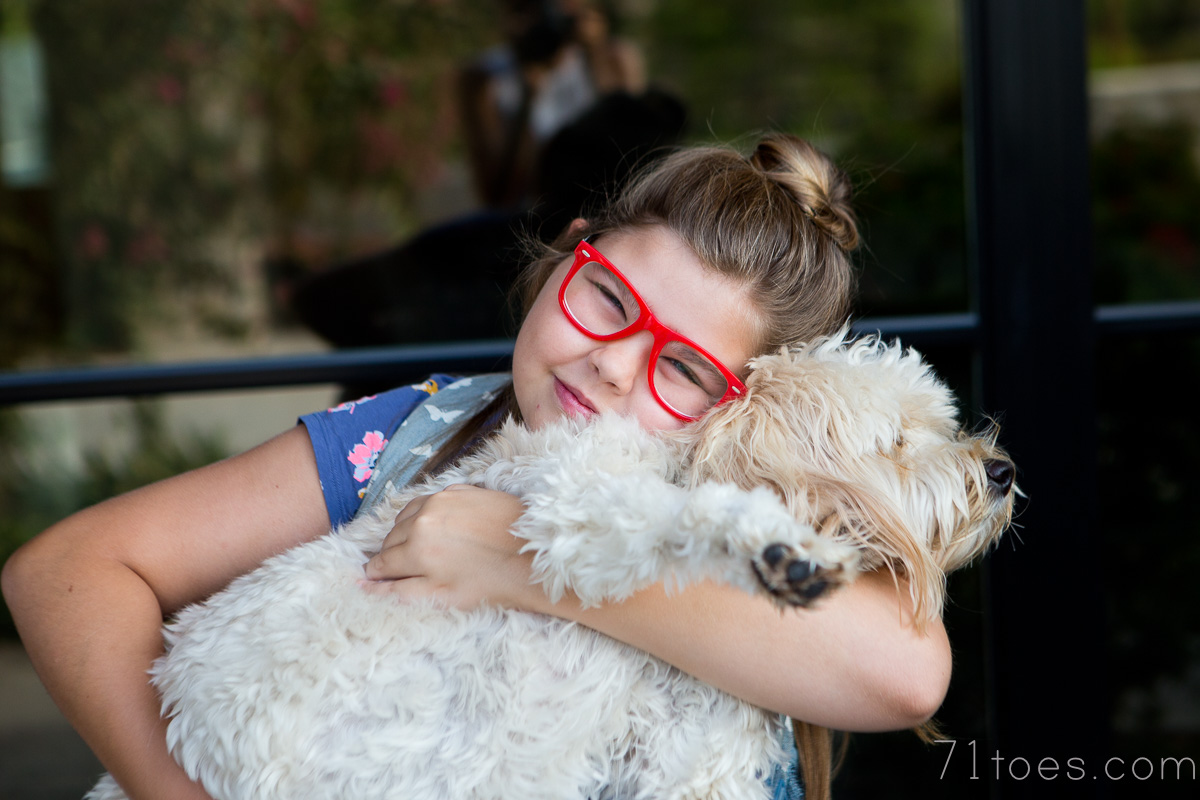 Of course, Lucy’s trusty Tevas were a MUST for that first day: 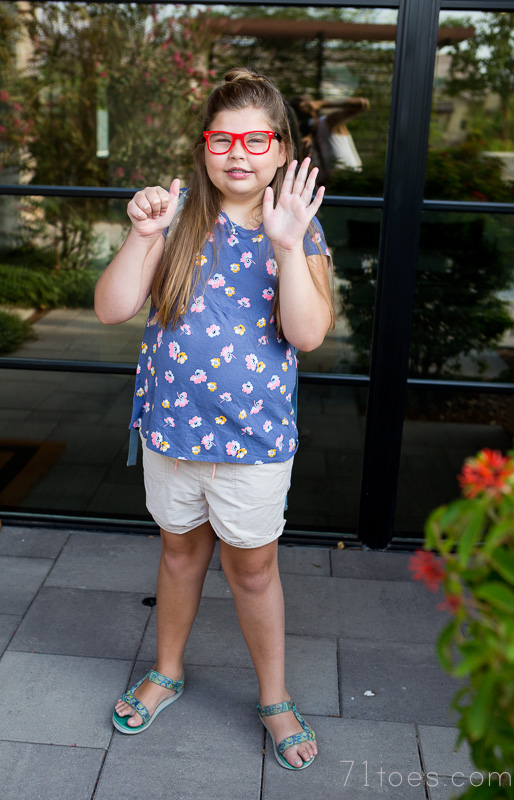 She’s had those things for years, they are threadbare and I had to sew them up with some ribbon this summer because they broke, but that girl wouldn’t hear of leaving them in the dust for something new.

At lest I got her to wear a new shirt.  That’s a big accomplishment in my book! 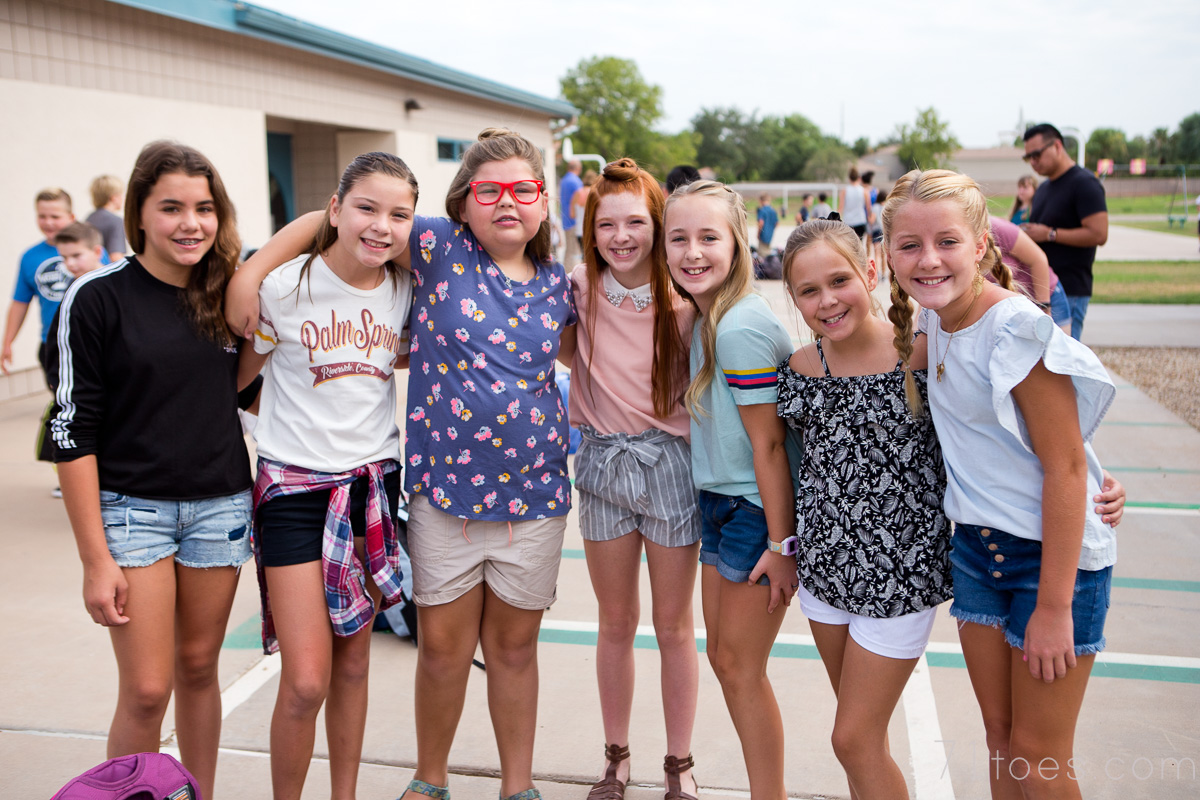 My friend asked me to help take pictures for the yearbook that morning at the school. 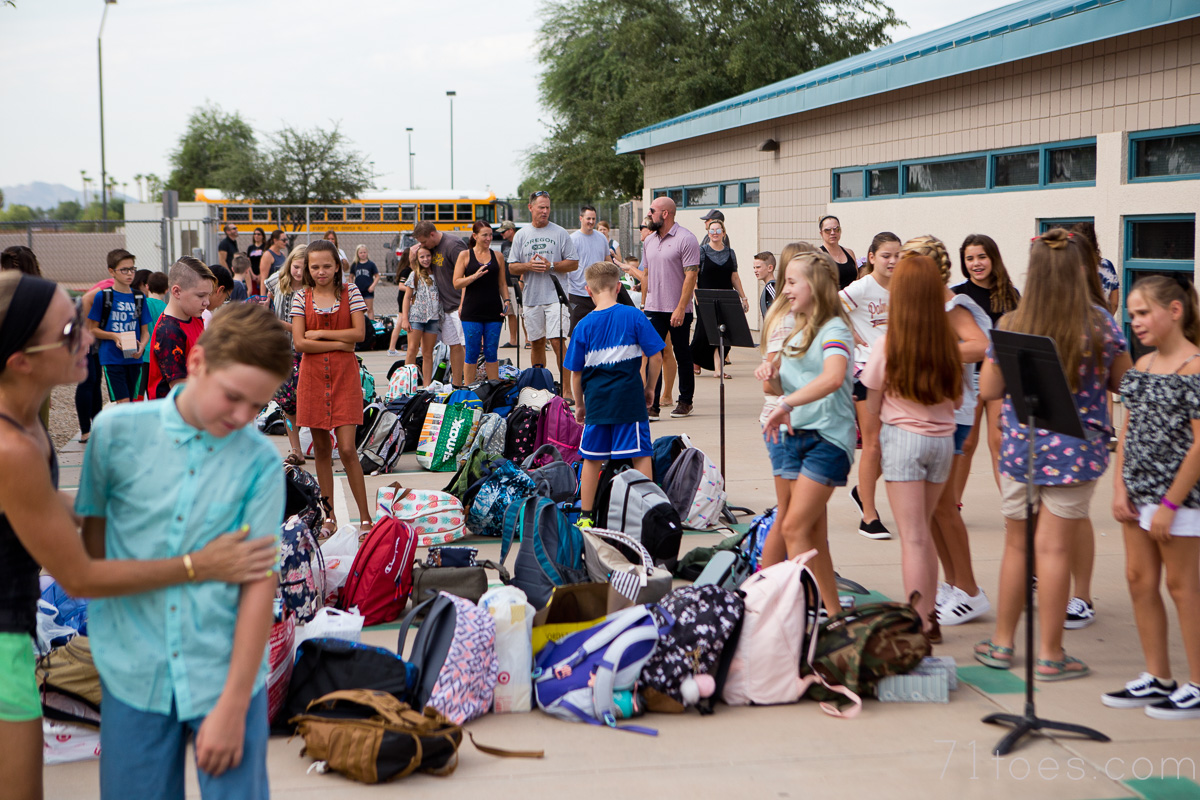 Once again I was hit with such a peace that it’s ok this is my last year, but so glad I got to be there in the midst of all that first-day hoopla one last time.

Our traditional “after-school-cookie-chat” was awesome, despite the fact that the cookies I made were quite sub par (I think I must have left out some ingredient…probably lost in my epiphany thoughts 🙂 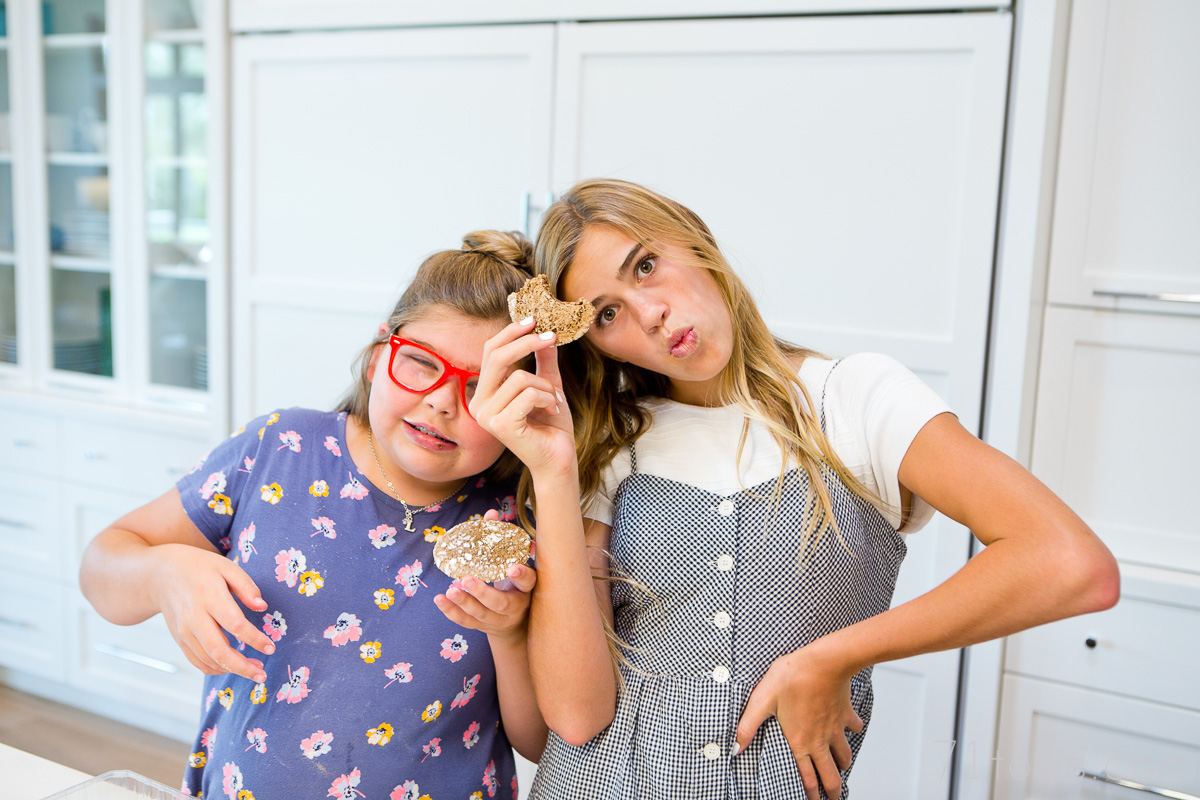 They didn’t seem to mind. 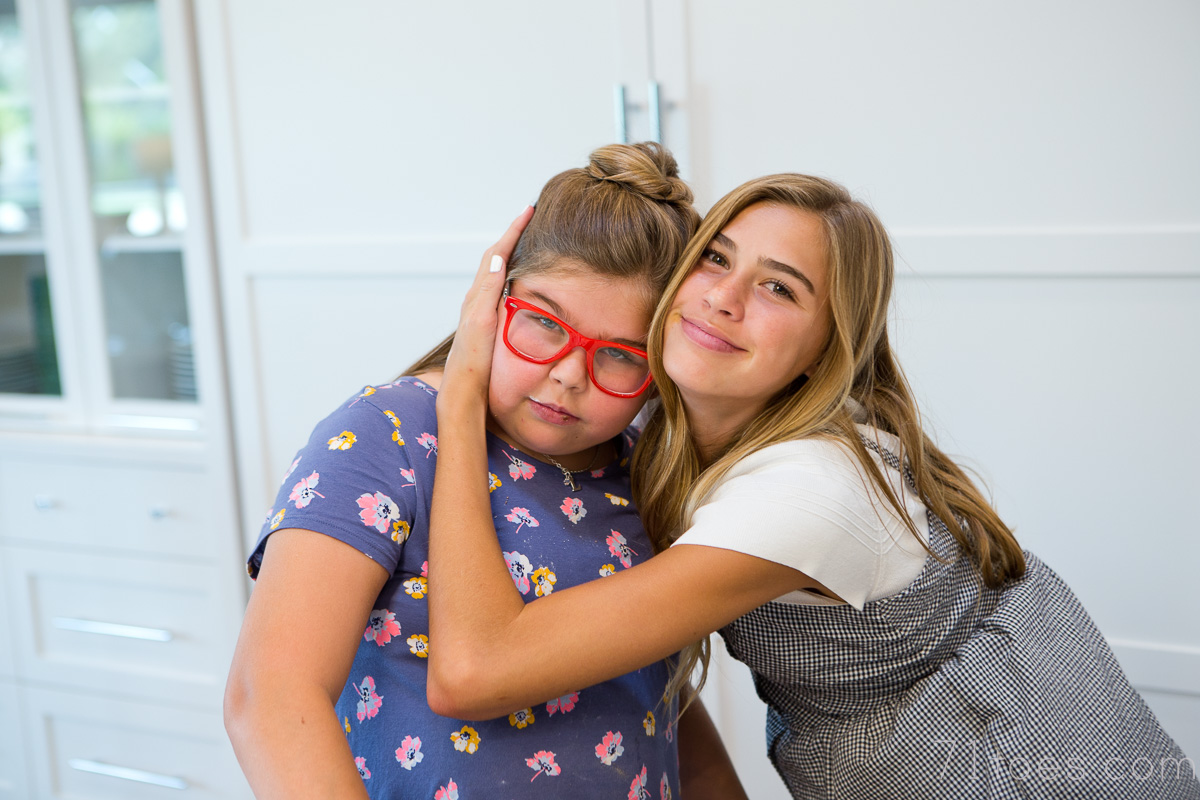 I say this is the “first” first day because we’re gonna have to do another one on Monday.
Because by then we’ll have our Senior in tow as well.
We’re pretty anxious to get that girl tonight!  HOORAY!
She hasn’t had her phone for two and a half weeks and apparently got it at 4:00am this morning.  This was my call history this morning: 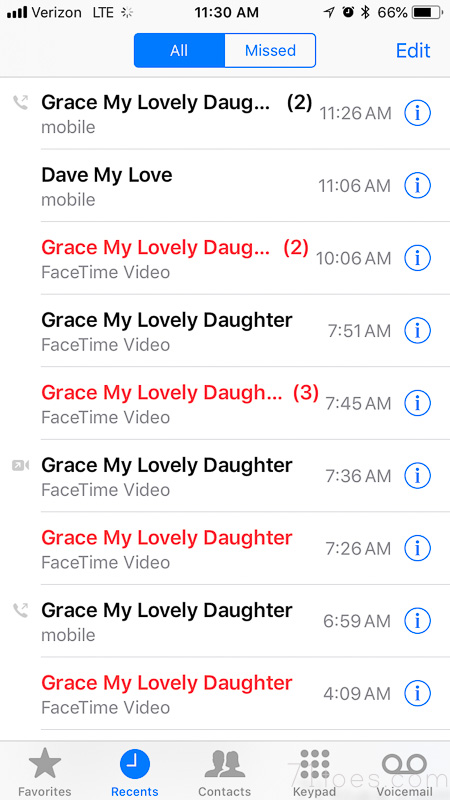 It was SO good to get to talk to that glowing girl!  Cannot wait to hear all that excitement in her voice spill out in person.  Hopefully I can talk her into sharing a little here in the blog world from her adventures.

Until then, good night, sleep tight!

good thing I cried while reading this. you may be ok with being done with that but im not done seeing it or being that one hehe

Ah but you will always be my baby Elle Belle. Love you forever.

Avoiding stores you could buy the supplies off amazon once you have the lists.

I’m just starting my journey with my three year old who starts in September. I’m not quite ready yet to say ‘goodnye’ Even for three hours as I’ve had him at home for three years it’s going to be an emotional one for sure.

Your sentiments are exactly how I feel about my oldest staring middle school and only having one left in elementary. I lived the good life in elementary school ad when I look around and see all those young moms with teeny tiny littles, I smile to myself and think how happy I am to be where I am with my kids at the age they are. As much as I miss those little years, it's ok that we're moving on to bigger and better things. I also like how you said you were growing up as well. I never really thought of it like that, but its' so true. Hope YOU and the kids have a great school year. We start in 2 1/2 weeks.

Your words are my words. I have said "goodbye" to to elementary but my last one is in 8th grade and my oldest is in college. It's amazing how mixed your feelings can be. One minute I could just bawl in a corner and then the next minute I feel like mentor with gleaming wisdom to all young moms. 🙂

I feel the same. After I wrote this it did cross my mind I should write a disclaimer, because letting kids go sure is a roller coaster sometimes!

You summed it up perfectly. My youngest "graduated" from elementary school this year. I LOVED being part of that world, but I'm really really okay with moving on. If only those junior high and high school years didn't fly by so quickly.

Yes, if only we could slow down time!