the benefit of the “wind” to help shape our kids

August 21, 2019
Still working so hard on the new blog (thanks for the input on the last post!  Keep it coming if you have more!)…hoping to have it up by next Monday (that’s the goal).  Can’t wait!!  But for now let’s talk about coddling parenting…
I’ve been thinking a lot about “lawn mower parenting” lately.  You know, the act of mowing everything out of the way for your kids to “take care of them” when, in all actuality, that “helping” is really hurting because they’ve got to figure things out themselves in order to grow roots.
Oh I’m guilty of that kind of parenting sometimes for sure.  I’m all about having them doing things out of their comfort zones, but when the going gets tough, sometimes it’s all I can do to not let myself swoop in and try to help.  I don’t want to watch them suffer when I can do something about it.  Especially when I’ve been there.  I was that lonely, shy girl clinging to my mom, or my sister, or my friend…whoever I could get my hands on.  And I’m so grateful looking back that my parents were ok to let me figure out my own way to greet that “wind” that came my way instead of trying to always protect me from it.
Good timber does not grow with ease:
The stronger wind, the stronger trees;
(the rest of that awesome poem and my thoughts about it back HERE)
I don’t know if my parents were conscientious of letting that wind come, or if it was more the way to parent back then, or if they just had way too many kids to protect them all (ha!…they were pretty deliberate I have to say, but I do think we now live in a world of much more protective parents).
Anyway, there have been some instances this summer that have helped my kids feel the “wind.”  Times that “wind” made my heart ache for them. That “wind” has come in all different varieties and types, ranging everywhere from deep and dark to just needing a little (or lot) extra courage, but “wind” all the same.  One of those “needing extra courage” ones came when I dropped off Claire at volleyball camp.
Oh, yes, she’s so lucky she got to go, and she knew it, but that girl is just like her mother was at that age…and probably like lots of other teenagers: sometimes new experiences scare-her-pants-off.  She knew no one and we were dropping her off for a week and she was a ball of nerves.
The dropping-off was a favorite memory though: Grace and Lucy trying to pep Claire up, Claire cautiously optimistic about who her new roommate would be as we helped her unpack.
Here she is with her big sister at check-in: 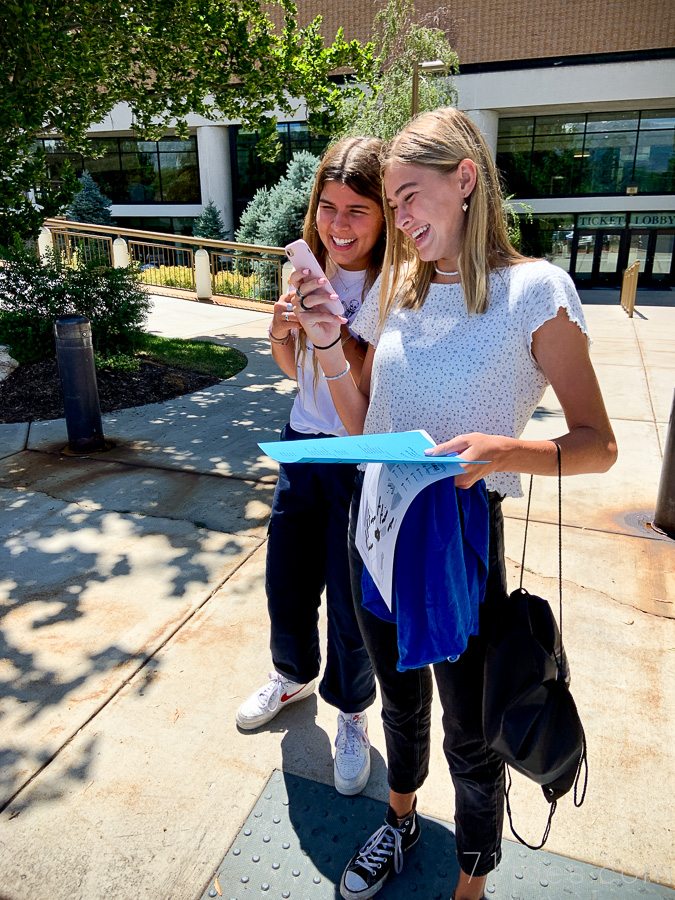 Oh you can’t see the fear in her eyes in that picture, but boy, she was nervous and was putting on a good face (and my heart was swelling up with love at that).  Elle was going strong with the pepping up too…I had to screenshot this cute “conversation” they were having:

We got her room all situated, waiting anxiously for that roommate, those two sisters making up all kinds of nicknames for that non-existent girl. 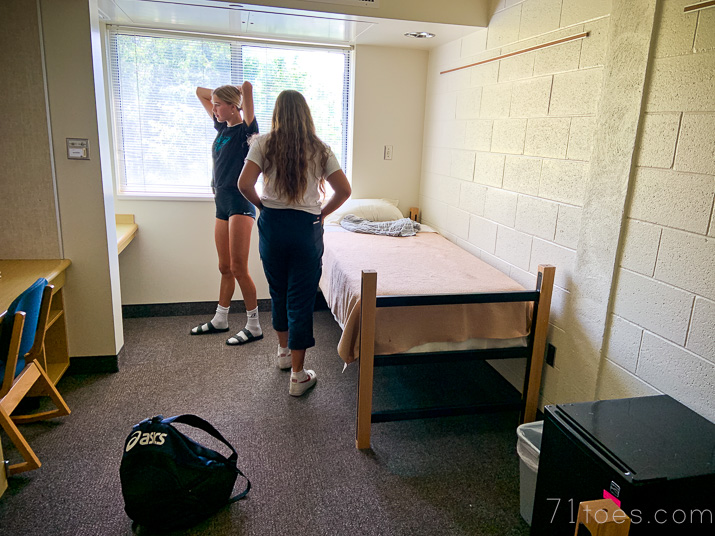 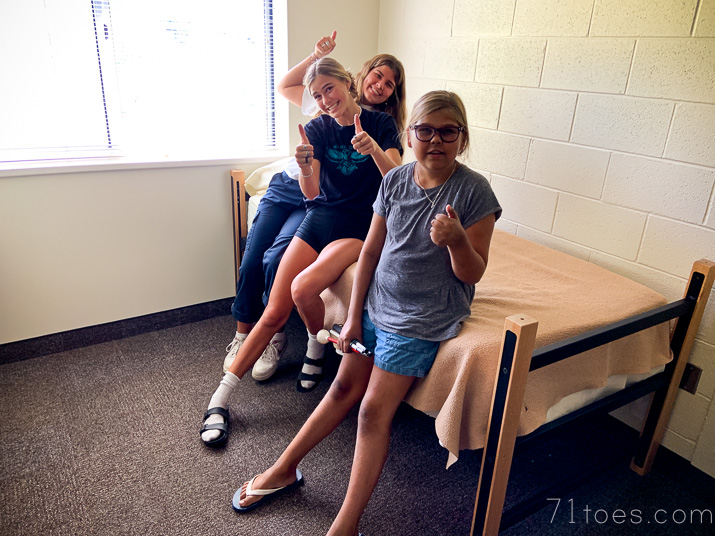 Still no roommate when we had to head to the orientation, but I put on a happy face and tried not to let on how nervous I was for her at the orientation.  Nervous because Max went to camp once and never got a roommate and I was so sad that he was all alone and he ended up loving it anyway.  Isn’t it so funny how we as mothers sometimes get even more nervous than our kids are?  And we try to zip our lips closed because maybe they’re not even nervous but if we say something they may well realize that actually, come to think of it, they are nervous after all.  Which may induce a bout of bursting out in tears.  Or is that just me?

So I stood there and acted like my heart was just as good as ever as all the coaches introduced themselves (some from Max’s team which was fun): 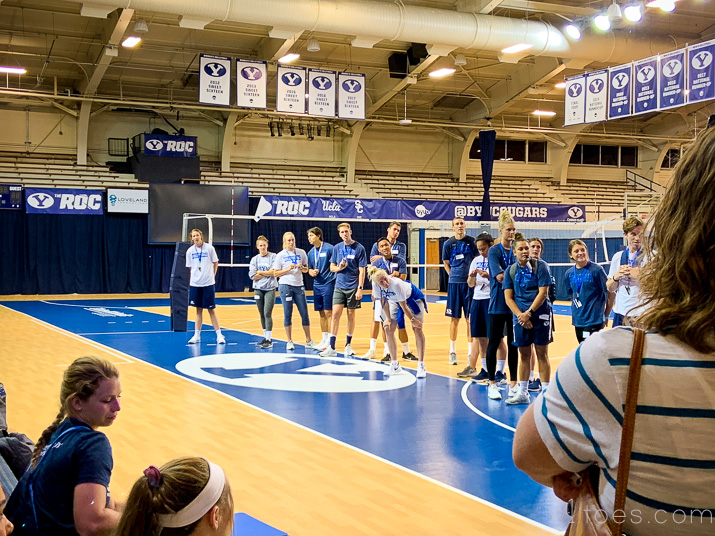 And Claire stood there alone. 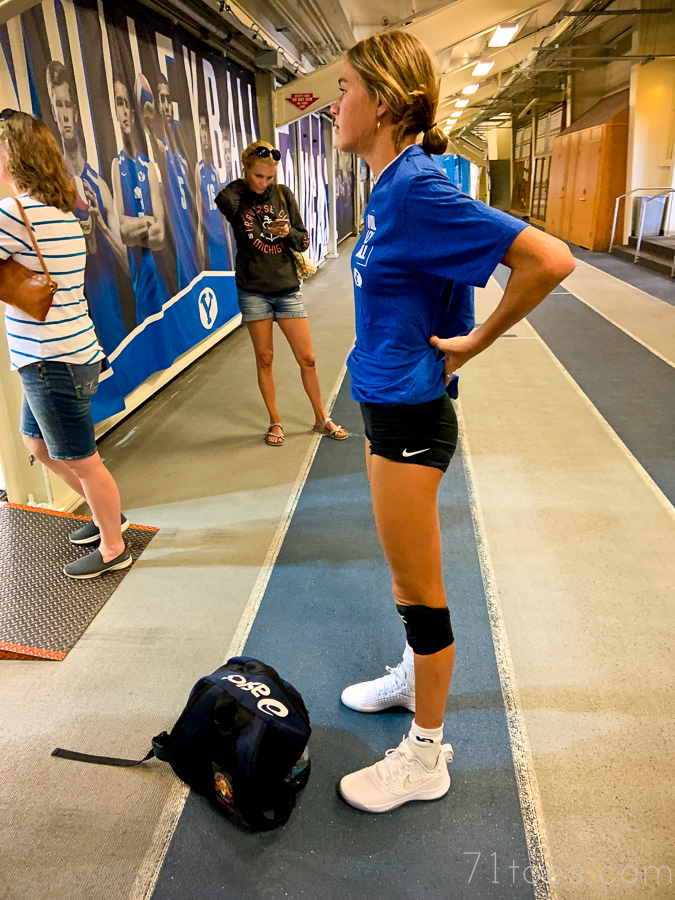 Why is that so hard for me??
Then Grace, Lu and I left that girl of ours and headed up to the lake where my family was starting to gather.  We drove and drove, my heart sinking getting texts from Claire that there really was no roommate.  She was alone.  She didn’t want to be there.  I told her to be strong and it would all be great, but then called Dave and blubbered to him about how I’ve been there, in that spot as a fifteen-year-old.  Oh it was all kinds of different situations, but it’s hard to let your girl be so uncomfortable.
But guess what?  Claire was chosen as the top team and singlehandedly won the final-day-of-camp tournament and everyone put her on their shoulders and cheered. 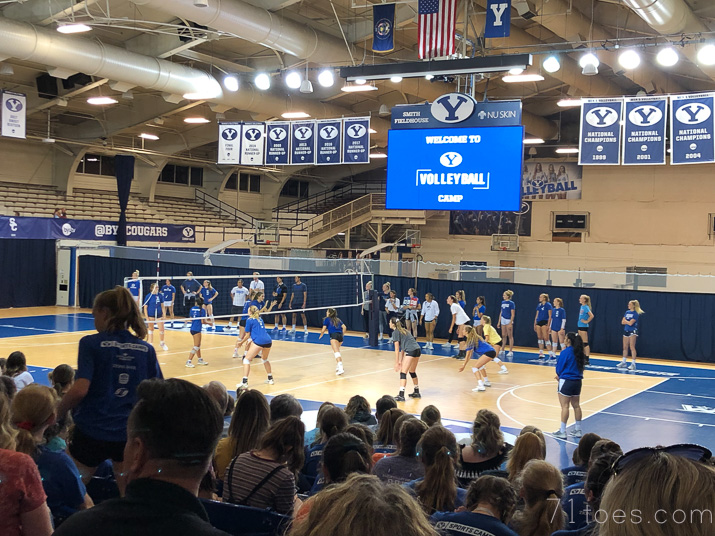 That’s not true.  But that girl’s timber did get stronger that week.  Because she took on that new experience and learned from it.  And her mom didn’t come in to save the day.  She managed just perfectly without a roommate.  She felt the joy of coming out of her comfort zone (really she did!) and pushed herself in a beautiful way.  She met so many great kids and had the best week. 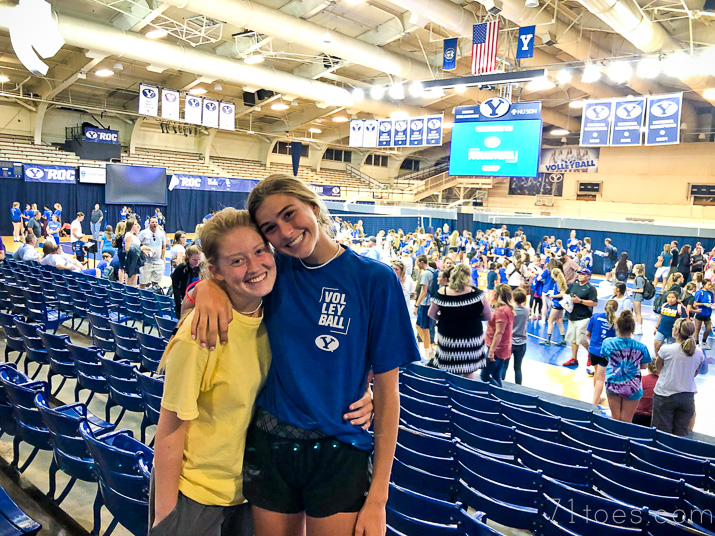 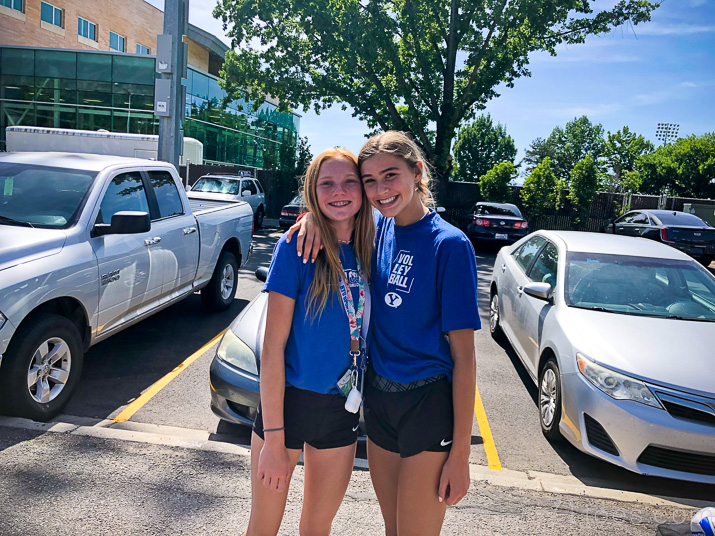 And totally lived to tell us about it when she arrived triumphantly with Dave to the lake, glowing with confidence that yes, she can do stuff like that.

This is a small and mild example of the many “windy” moments my kids have faced lately.  Some I can talk about here, some I can’t.  But even through the stress and worry, I do know that there is beautiful growth to be gained in all those “refiner’s fires.” So why is it so hard not to try to “save” them from all the tough stuff?

What about your kids?  Are you a “lawnmower parent” or do you get out of the way and let that wind mold and shape them into their best selves?  I think it’s good to ask ourselves that every now and again.

Can’t wait to read it, I’ll have to come back and report.

genuine questions and “the gospel according to me”...

the start of a new chapter for Claire

Boy oh boy does this come in handy today, especially with the new academic school year starting this week. We’re in Ohio. This particularly stood out for me and a strong reminder that we as parents are raising our children to become successful adults: “Because she took on that new experience and learned from it. And her mom didn't come in to save the day. She managed just perfectly without a roommate. She felt the joy of coming out of her comfort zone (really she did!) and pushed herself in a beautiful way.”. Great post!!!!

I can totally ID with this. My 14 year old daughter had to switch to a new school program today, away from all her friends. She was nervous about it all summer, but today after her introduction class she sent me some very positive and hopeful texts. I was so happy to read them and mentioned that I'd been praying for her. Your post and her texts are reassurances that I did the right thing by not fighting the switch.

Good for Claire! That would have been hard for me also, no room mate and not knowing anyone.

Yes to all of this, and thank you for the book recommendation! Another very good book specific to raising strong boys is "Defending Boyhood: How Building Forts, Reading Stories, Playing Ball, and Praying to God Can Change the World" by Anthony Esolen. It's not PC to talk about how boys and girls are different, but read it for yourself and see if you don't agree with him whole heartedly.

It's so wonderful and important to have kids go through the uncomfortable things. Being alone in a new situation is a recipe for growth.

This was the best post I could have read this week. We dropped my daughter off at college on Saturday night. She also never got a roommate and has called me crying every day since. We keep telling her to be brave, see the positive, talk to everyone, pray and to be patient with the process and then I cry myself to sleep every night ha ha. It has been so hard so your words were encouragement to my soul. I am currently reading How To Raise An Adult by Julie Lythcott-Haims and I really should have read it when she was a baby ha ha. I think I am the kind of lawn mower parent that is pushing the kid mowing the lawn- I always doubt that they can do it on their own because of the anxiety I see in them- but that is what makes them stronger like you said. Wise words Shawni! Thanks!!

I wish I was as brave as some of these children/teenagers of today. I dropped my daughter off for a transition day at a new school age, she knew lots of children but she was very anxious and worried. She’s 7 but as her tears started to fall and she begged me not to leave her my tears started to fall too. Through my tears I told her to be brave, be confident ( her words she likes to use) and that she was going to be fine. I cried most of the morning but when I picked her up she came out beaming. She’d had the best day. Phew….