A couple weeks ago I went with Lucy to a little carnival the Junior High kids put on for the pre-schoolers. (That’s a post in and of itself for another day because seriously, how cute is that that they do that each year to serve these kids? Very, very kind.)

The kids went around to different stations and did all sorts of crafts and games. One of the stations was a bounce house that Lu was delighted about. She jumped and jumped with a huge smile stretched across her face. 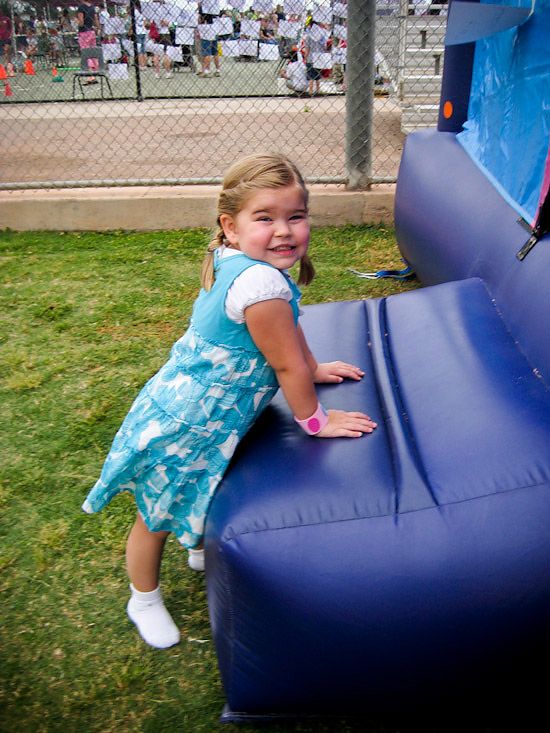 When it was time to switch stations I was distracted talking to another mom. When I turned around I saw a big surprise:

Lucy was putting on her own shoes.

Now, I know it may seem silly to be amazed at a four-year-old who can put on her own shoes, but Lucy doesn’t dress herself, and she certainly doesn’t put her shoes and socks on. Sure, we try to have her do these things herself. She even has an occupational therapist who comes each week and works quite tirelessly to help her independently dress herself. So yeah, you may be able to imagine how my jaw dropped a little when I saw her over there happily putting her shoes on without even being asked.

I must note that it was certainly not an easy task for her…she was trying to shove the wrong foot in the wrong shoe, but she was “in the position” and she was trying. And it made the hairs on my arms stand up I was so proud of her.

At home she just says “I can’t.” And we believe her.

She has me duped. She has us all duped. But apparently her teacher at school is far from duped. She told me they always take off shoes after they go to playground, dump out the sand, and then put them back on. Lucy needs a little help, but she mostly does it herself with the rest of the kids. The teacher simply expects that, so the kids follow suit.

Now, don’t get me wrong. We expect a lot out of our kids, including Lucy. We try to push them in every way we can. One of our favorite things to tell the kids is this:

But Lucy throws us for a loop. Her feisty personality in combination with her syndrome and her “four-year-old-ness” often keep us guessing about what factor may be to blame for her lack of skills in certain areas. We baby her way too much. And we’re in a hurry too often. It’s just so much easier to do things for her most of the time.

But man alive, as I stood there on that playground trying to pull my jaw up off the ground I realized we need a change. I came home and told Dave and the kids we need to let that sweet girl of ours fend for herself more often. We need to let her struggle. Because that will make her grow.

And really, who couldn’t benefit from a little more “fending for ourselves?” That’s what makes us all stronger.

I recently heard this quote: “Welcome the task that makes you go beyond yourself and you will grow.” I love it.

We’re all trying to work with Lucy to help her be more self-sufficient, but we’re trying to push ourselves a little more too. Because in the end, it’s the struggles in life that will truly make us into who we want to become…and who God wants us to become.

Hooray! And thanks I needed that bit of advice. Getting out of your comfort zone is important!

The small and simple things are some of life's most beautiful blessings and milestones.
It's hard not to want to help Lucy with that cute face and bright eyes, but she may be capable of doing a lot of things you don't know about. She's a smart cookie, I think she's going to surprise you a lot.

Good for her! I think so much Shawni, that the youngest always has everyone ready and willing to do everything for him/her…the blessing/curse of being the baby of the family!
Her smile is so sweet!

Thanks for this–we are doing mental cartwheels over here because our seven year old finally learned to tie his shoes. He had velcro forever because he really does struggle with fine motor skills. But when we were all ready–meaning I could finally remember to start getting him ready with enough time to do it himself, and he could actually finally "make the bunny go through the hole"–it all came together. It was our latest reminder that in their own good time, they all "get it"–whatever "it" is! Congrats to Lucy and how exciting.

Thanks for this. As always, I leave your blog feeling inspired.

you are so inspiring. thanks for sharing such good thoughts on your blog. i can always count on it to lift me or help me in some way. thanks! and go lucy!

Hi Shawni, I've never left a comment but I love your blog. I am a friend of sarah T. Anyway, what a great surprise Lucy gave you. She is so cute and so is the rest of your family! Struggles for sure make us stronger and less judgemental. Even though I somtimes hate my struggles I do see how much they make me grow! Hooray for that!

Shawni, Did you ever post your Easter Cookies recipe you talked about last year at Easter time. I tried searching for them on your blog, but didn't see them. I would love the recipe! Love your blog! You are inspiring!

Wow. How incredible! Isn't it ironic that the things we're meant to be help up to become more like God? In a Marriage we learn more about love, forgiveness, and selflessness than (I think) any other relationship. With having children, we learn things just like what you just did! Now you understand why Heavenly Father BLESSES us with trials. As a mom, you can see that for your own child! Gives me chills!

I love this post, I have a special attachment your sweet Lucy. Well done!! I have 2 visually impaired boys and I know that I baby them and while I want them to be independent I also want to take care of them. We just hit a huge milestone with our 9 year old, he tied his own shoes and I have been trying since kindergarten but all it took was one Sunday morning with Dad and now that he has conquered it he won't let me anywhere near his shoes now.

I'm so in awe of your wisdom! It's easy to jump in and do the things that sometimes challenge our children…Lucy is amazing in her own right and will continue to grow and develop in her own special way…What a blessed little girl she is to have such a loving and supportive family. God bless you all
~Mary

She so darn cute…I think I could be duped by her too! 🙂

Lucy is a cutie! This post reminds me of Paul V. Johnson's talk this last conference…it was my personal fave.

I always love your blogs, but this one particularly rang a bell. The line "We are always in a hurry"…. that is so much our life and I need to s.l.o.w. down and let my kids learn a little more.

Our son is 4 and has BBS and we baby him quite a bit as well. Like you said, it is hard to know what is his age, his personality or BBS. We've come to realize that Zac is just Zac. I'm still not quite sure what kind of expectations to have for him. B,ut every once in a while I get a sneak peak at what he really is capable of and take it from there. Thanks for the post!