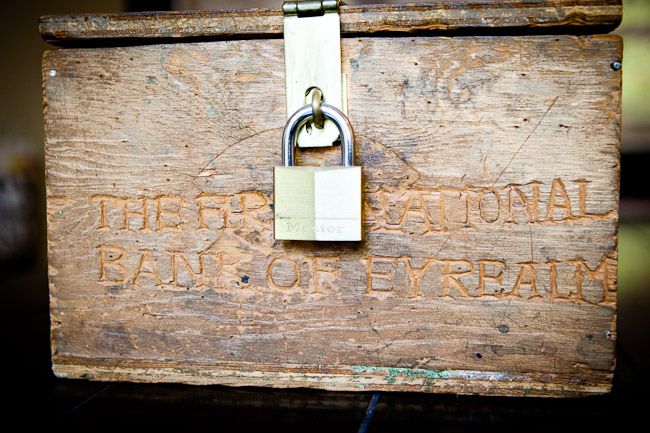 I inherited this “family bank” from my Dad.

It is old and battered from job “slips” and “payday” and inches of coins jingling around in it’s belly for so many years in a row.

The key to it’s padlock was lost long ago so the top hinges have had the screws removed so it will open up like a claw to let us get to the money inside.

But I love it because it symbolizes so many things about my Dad.

I picture him cutting the wood to fit just so, then pounding in the nails to make a box. I’m sure he recruited some of us kids to help with that.

I picture him waiting in line at the store to buy the hinges, the padlock, some golden spray-paint…his mind swirling with ideas of what this would mean to his brood of children he wanted so desperately to raise the right way.

As I examine that semi-crooked carved-out writing in his artistic hand I picture him taking time as he carved to methodically think about how he would help us earn money. How he would strive to help keep us carefully protected from entitlement…a watchful steward full of “loving more.”

When it was done…a bright, golden box…he introduced it to us children and we became fast friends.

He sat behind it on “payday” every Saturday and helped us calculate our earnings…tithing and savings always first. We earned more if we memorized quotes that had serious meaning. Could he know that we would still remember many of those deep in the recesses of our thirties? 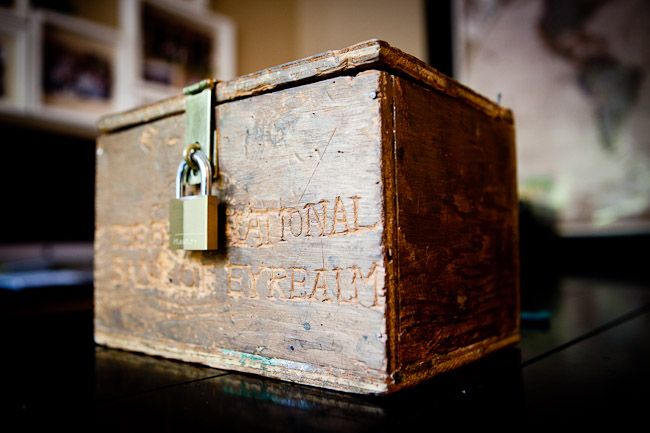 That bank, the carved letters, the payday, the bright gold spray-paint now faded from years of use…they were just a tiny portion of his parenting. The golden family bank is just a symbol of how much he cared about us.

That parenting that has stretched ever so strong into the future where he still cares just as much.

Only now, it shows more in his phone calls and his incessant full-of-love emails. His frequent visits where he snatches up our children and carries them into an imaginative wonderland all of their own.

And then he helps them make their own treasure boxes each summer at Bear Lake.

But the magic that his grandchildren may only understand later is that those boxes they are making are not really for holding treasure. They are the treasure. A symbol of a Grandfather’s love.

Just how that golden box is a symbol of a father’s perfect love.

the power of ONE

the ancestor book and the scaffolding of a...

a birthday and my dad

I was able to soak up some of your wisdom at the retreat this past weekend.(I am the crazy girl who sang the gunny bag song to the crowd…wow, I am still so mortified I did that.)
Anyways, when I read this post it made me think of the picture you took with the reflection of his family on his sunglasses. He must be so proud of his children and delighted with his grandchildren.

His posterity is definitely what he envisioned 30 years ago. Great post as always!

Beautiful. Earlier this year I adopted your 10-20-70 rule in my own life and it works beautifully! Can't wait to pass it on to my kids!

I'm new to your blog and let me say, I'm in love! You seem to just get it! The whole "life" thing! Every post is so full of optimism and postivitiy. Makes me want to be a better mom, really!

Your Dad, man he's amazing!
I love hearing about him. If only all dad's could be that way. I have a great dad though and a great daddy for my children, but these stories about your dad, they warm my heart and make me realize how much effort can be put into parenting!!!
thanks for sharing!
tara

Gosh, that bank box is neat. The memories it holds, the love exhibited by the box itself. I LOVE that it's not perfect. It's a wonderful family heirloom.

I saw your parents speak last night in Lehi. First time I've actually heard them in person. They spoke of this very bank so it is fun to actually see it. Such inspiring people to look up to.

What a great post! You have an amazing dad!

What is the 20% savings for exactly? Retirement? A mission with Dave in the future? Or?

Did you have student loans when you first got married? If so, did you still do the 10-20-70 rule?

I have a LOT of student loan debt plus I am a newly wed that married a German. We had to take out a loan to move to Germany and to get basic furniture from IKEA to start off with, etc. I'm not sure that we can do the 10-20-70 rule right away. Maybe 10-10-10-60? (10% tithing, 10% savings and 10% towards debt/loans and 60% for rent/insurance/food/etc.) Germany is super expensive! I'm sure 10-20-70 would be easier to live by in the states where housing/food/gasoline, etc are way cheaper. But I'm positive we can live by this rule once we are out of debt 😉

What about vacations or short-term financial saving goals? Does that come from the 70%? I really would like to go home to the states next year but maybe that's not realistic with my student loan payments. 🙁

Anyways, cool that you have the family bank in your home as a reminder of the important financial lessons you learned from your dad. You inspire me to be better with money management 😉

Oh, I'm so glad you did a post on this famous box. I've been wondering what it actually looked like. I just read "Entitlement Trap" and i loved it. I just love your whole family and how you inspire and teach through your writings, blogs and examples. Thanks for keeping it real.

I was searching for ideas on chores and rules people may use in their homes, but I wanted to get inspiration from people who share my beliefs. It is difficult for me because I was raised completely different from the ways of the church. My life has been a very difficult road to travel.(long story) I turned to drugs and alcohol at an early age. The Lord has watched over me and protected me through out my life knowing that one day I would be lead to the truth accepting the gospel and turning my life around. I was taught by the missionaries and was overcome by the spirit! I was baptized when I was 22 by the man who opened my eyes and brought me to the truth! We married in 2003 and were sealed thereafter. We have been married for 11 years and have 3 wonderful children. We have endured many hardships and I have fallen away many times. I always end up coming back into the fold. Over the last 11 years I have learned a lot about myself, the gospel, the advisory and our Savior just to name a few. I have learned the hard way, but I have learned. I have always struggled with severe depression and bipolar disorder and have been hospitalized on many occasions due to these illnesses. It has been very hard on my family. I have made a lot of mistakes and bad choices in my life, but I know that I can repent and move on….trying hard each day to be the best mother, wife, daughter of God ect. that I can be. I have come to KNOW the truth and LOVE the gospel! I have set out to make our home a more holy place for my family and to come together to create a healthier, happier, more loving family for all of us. I stumbled upon your blog while searching for rules and chores for the LDS home. As I read I began to feel the spirit! I am so grateful to have found your blog. I can already tell that you are going to be an inspiration to me! Thanks for all you do! Marlana Davidson

this is really neat. I'm so curious how you ended up with it out of all your siblings? I've considered making one for each kid that maybe they can take with them when the leave this nest.