January 24, 2019
It’s weird that nearly a month into January it already feels weird to write that “2018” up there in the title.  It’s like it was a century ago or something!

Christmas was a good one…I think 🙂  I still feel like I was in such a post-wedding-blur that I’m really, really glad I got pictures to remember it all.  Especially since there was a moment there that I thought I lost my memory card full of Christmas pictures.  Yikes was I ever stressed and so grateful when my brother helped me find them.

Here’s how it all went down this year:

Later wake-up than expected, but the girls had been quietly wide awake for a while I guess. I love Christmas mornings.  I love that everyone gathers in Claire’s room and I love that when I sneak in there, there is just happiness floating around the air. 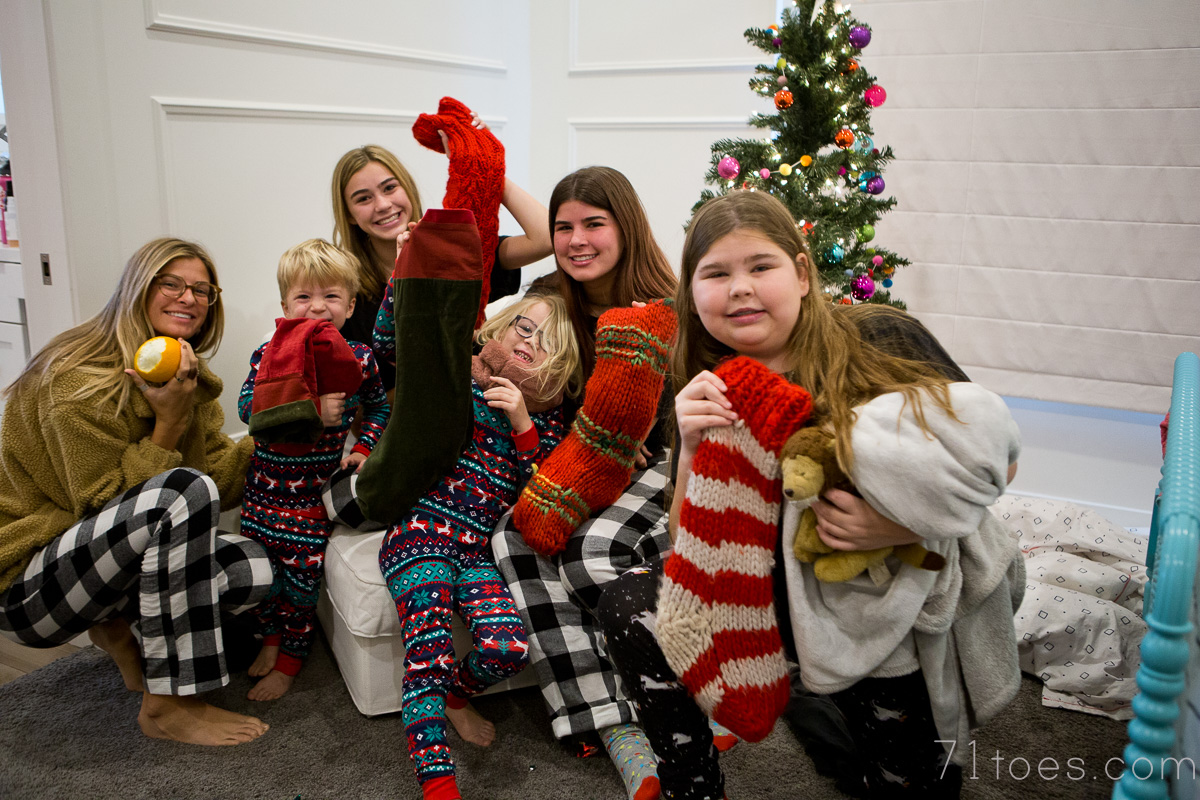 (And love that we had extra cousins in there this year to mix in some extra excitement in that love-air.)

Santa gave Lucy some perfect socks that she was thrilled about: 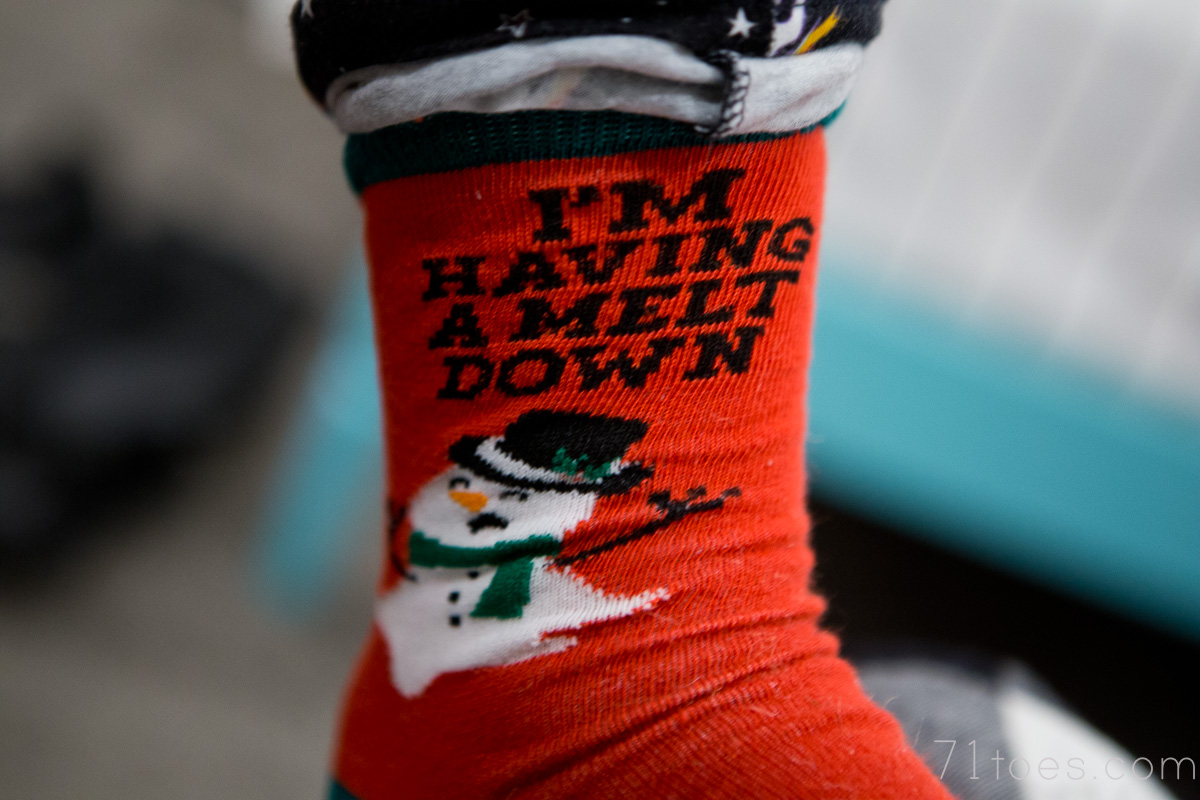 Ha!
On to the traditional singing before being allowed to go into the family room, that is supposed to wake Dave and me up, but that just happens now whether we’re awake or not: 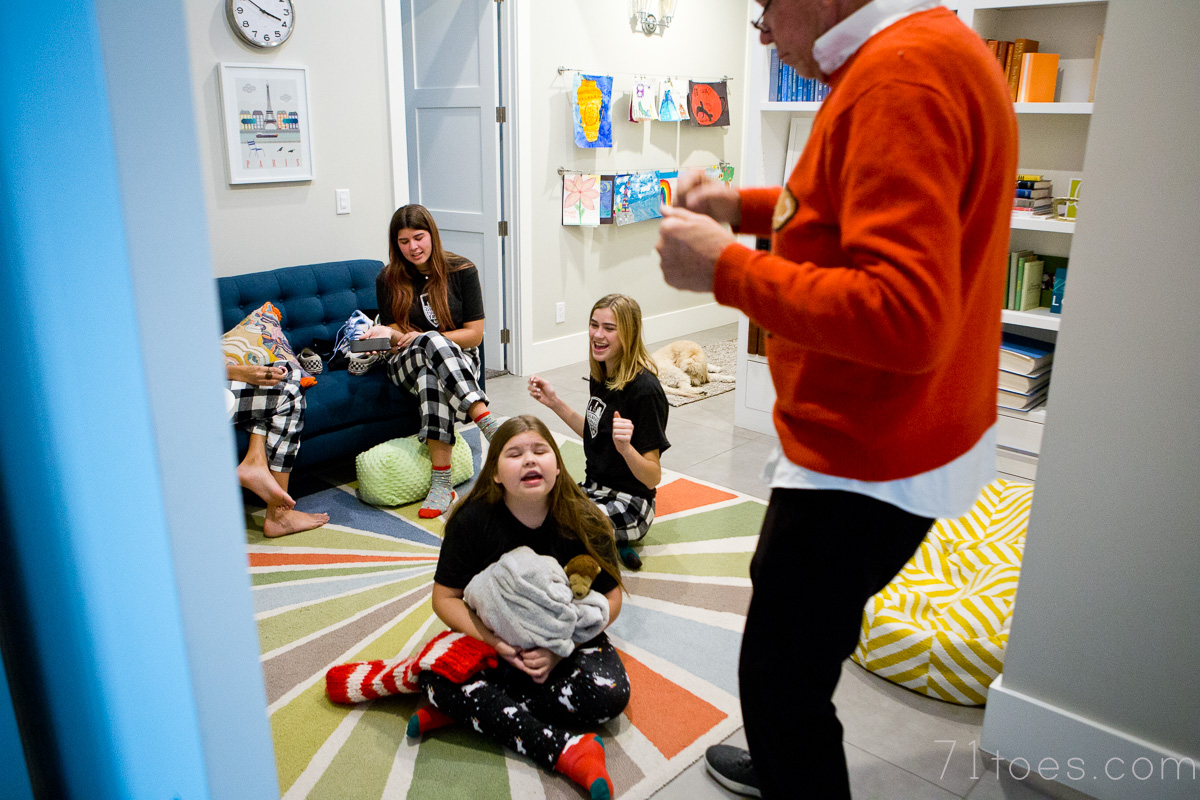 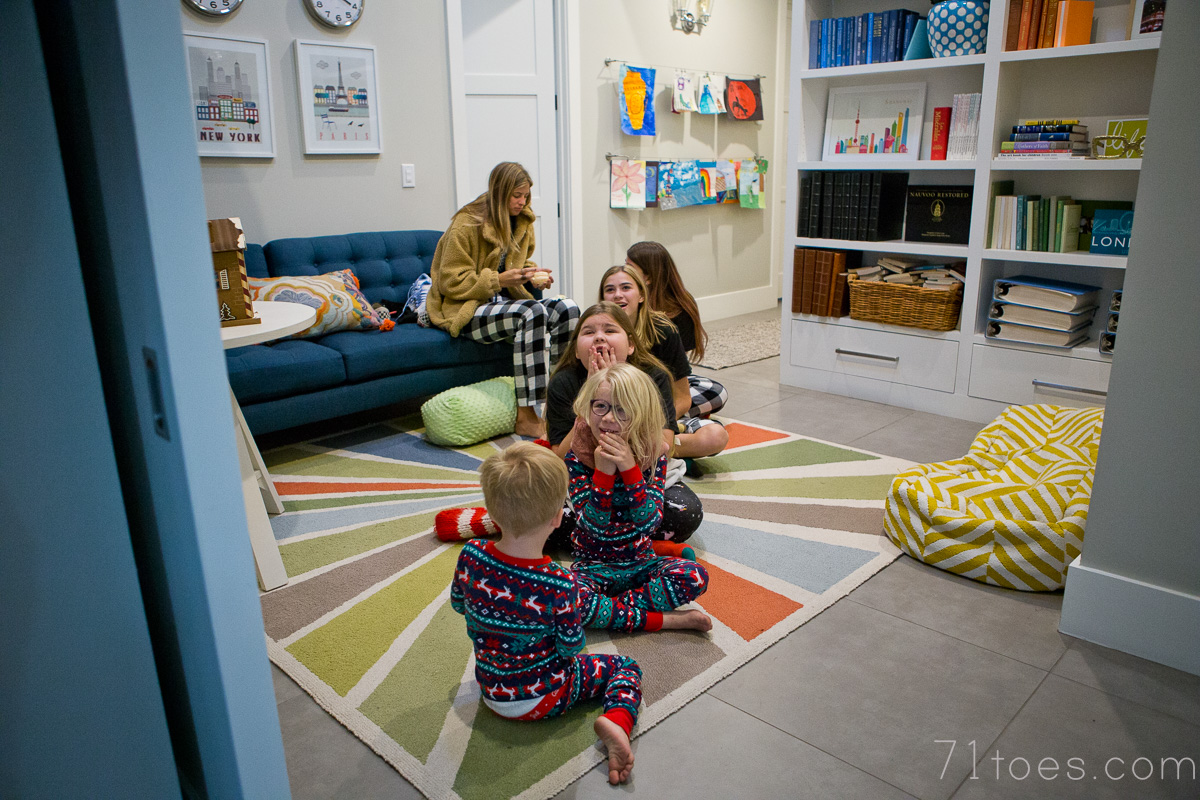 Youngest to oldest gets to go in and check out what Santa brought: 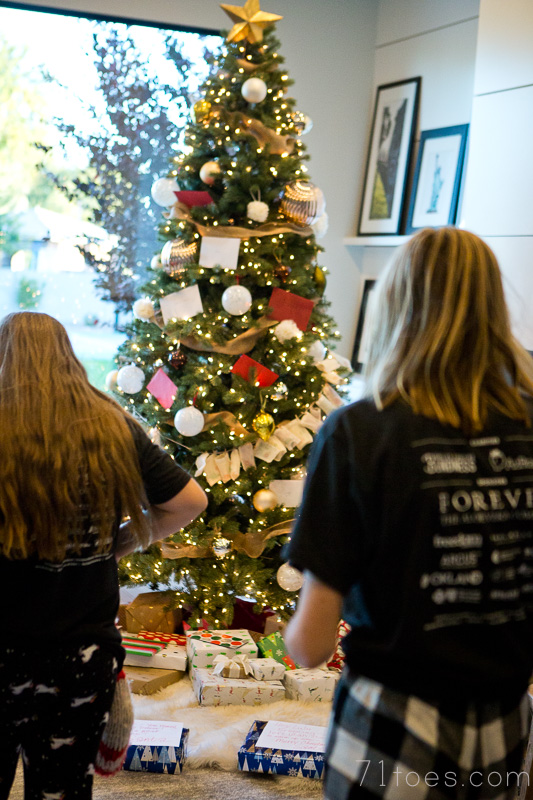 Which is funny now that the gifts are small enough to wrap instead of bikes or pogo sticks or doll houses.  Now they are all wrapped up and waiting, still with their Santa-squiggly-writing on top. 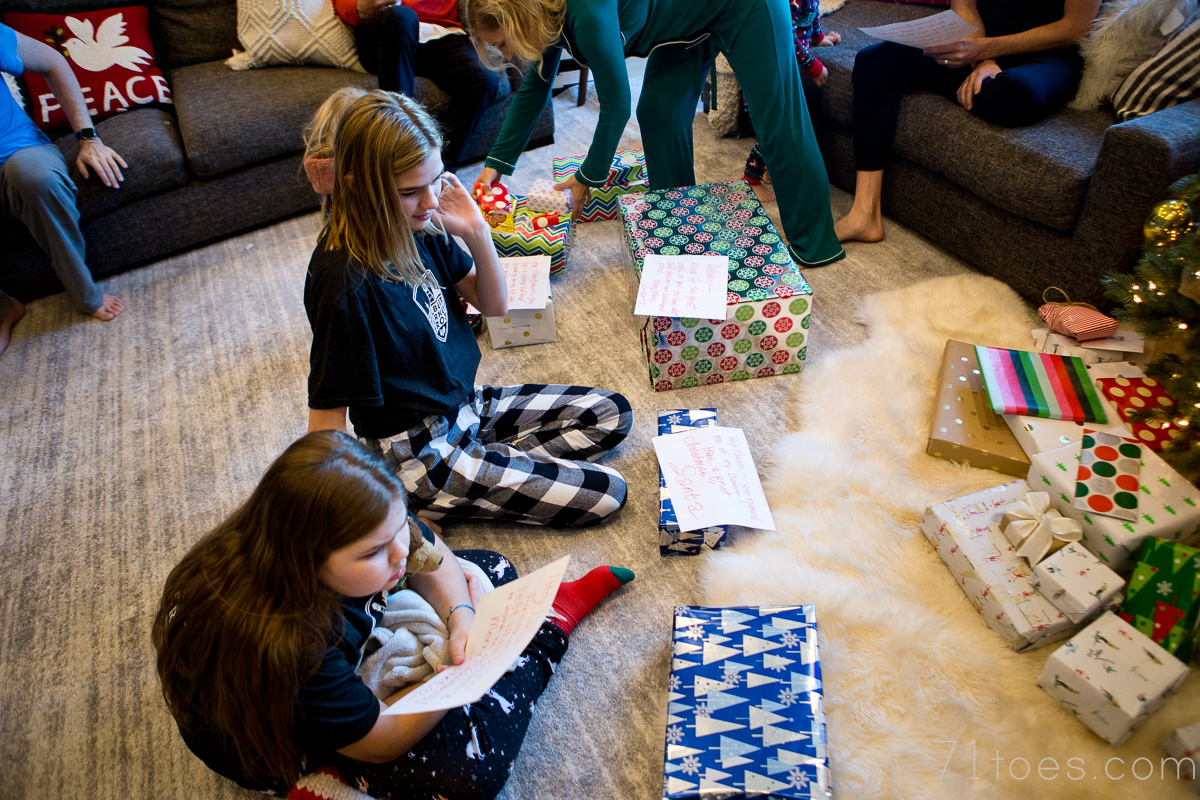 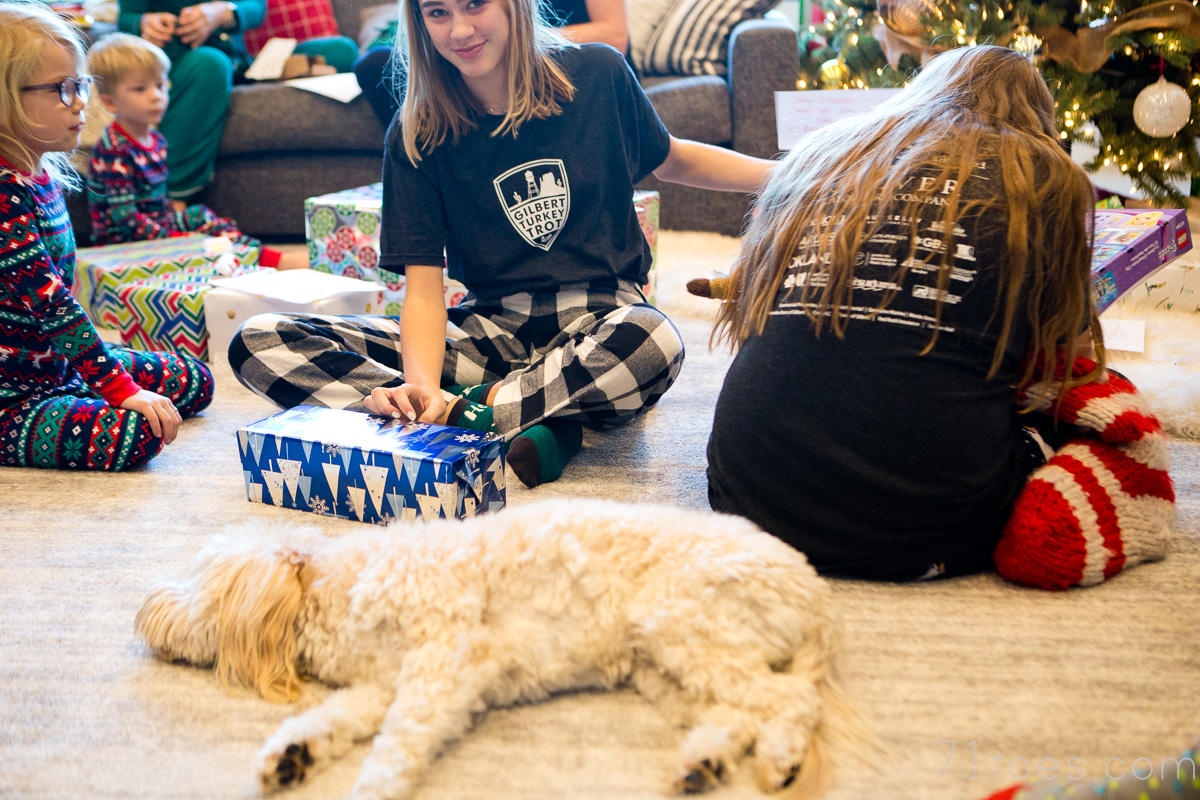 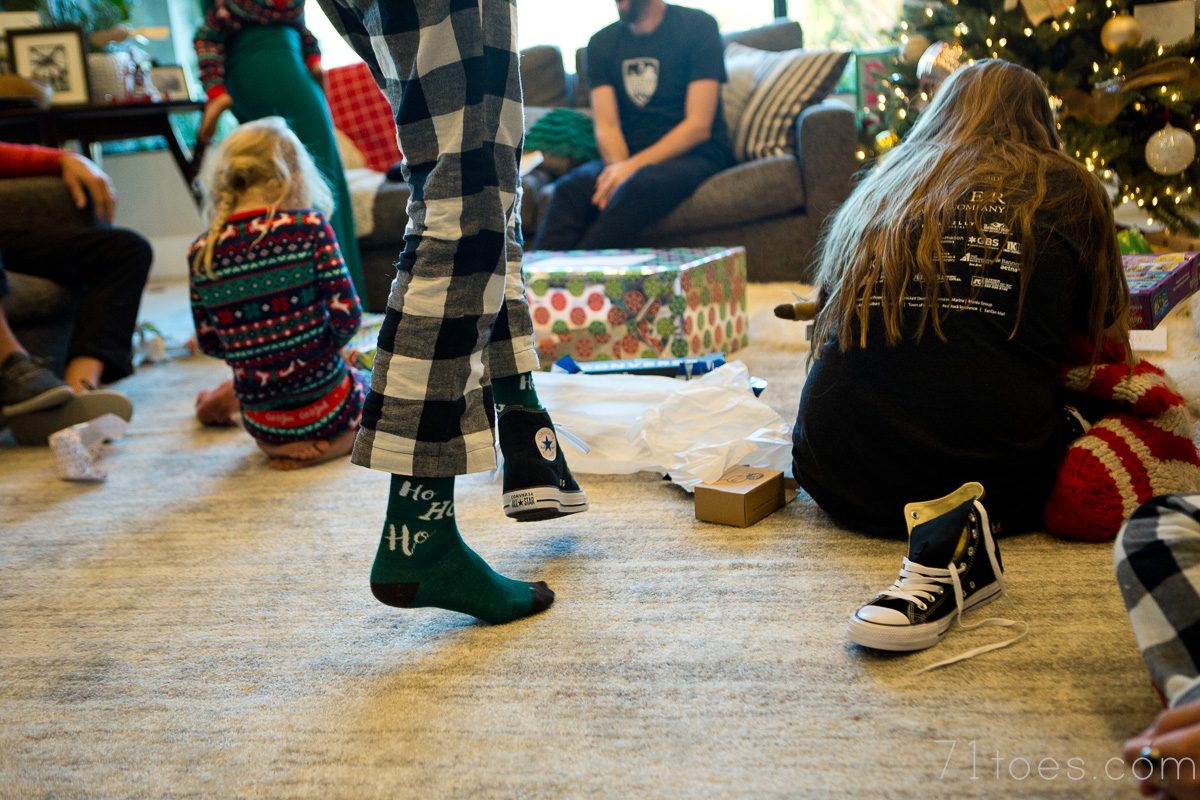 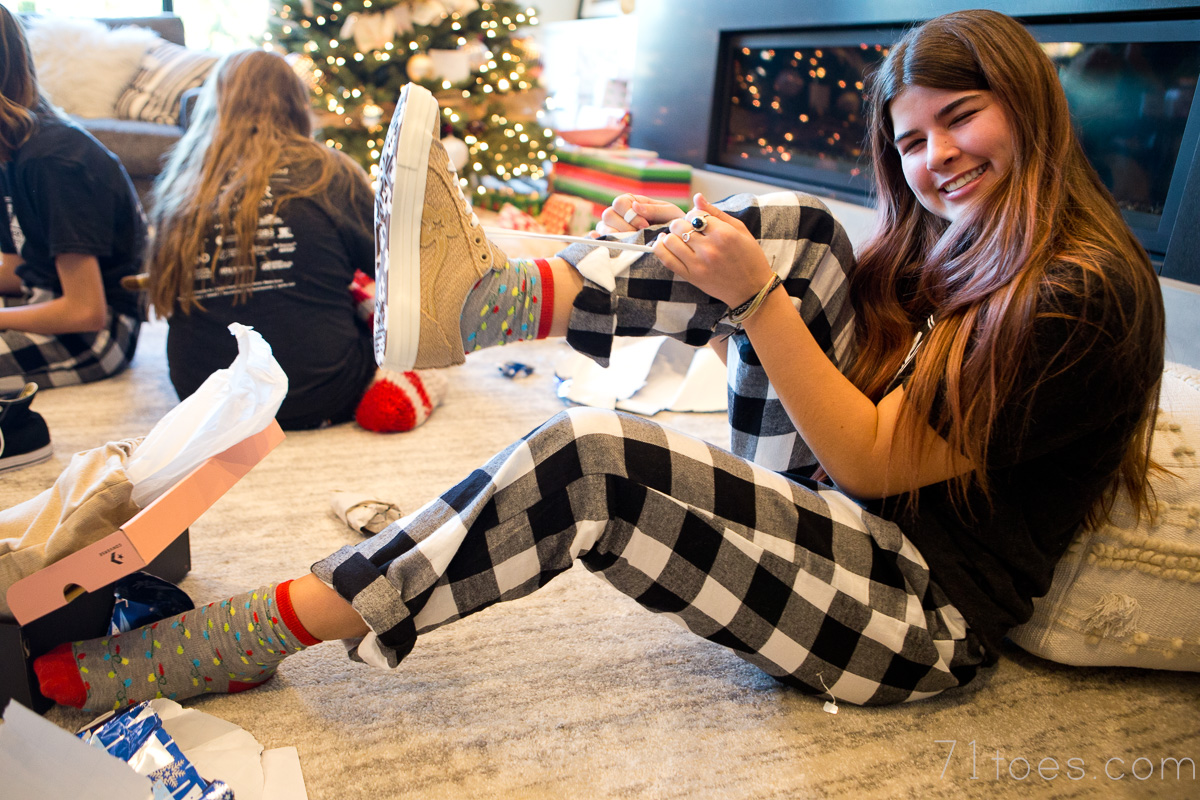 …and Legos and madlibs 😉 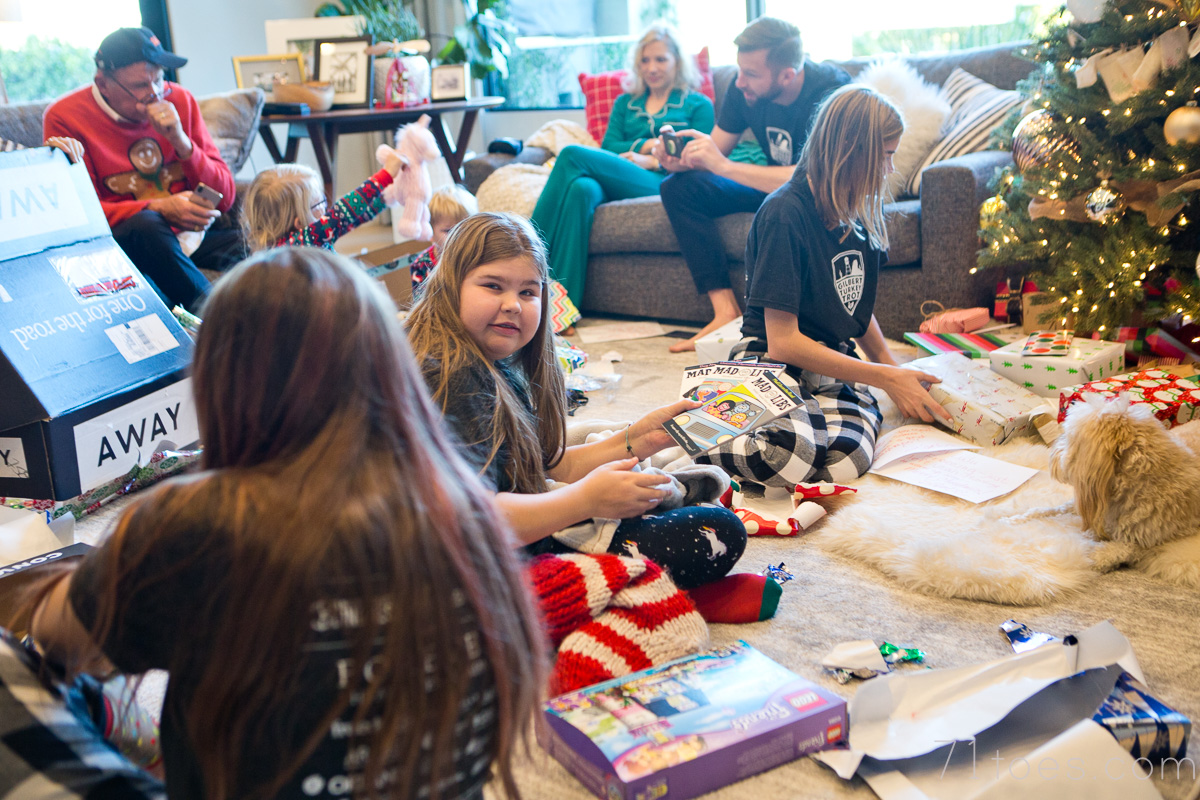 Lots of gift unwrapping, all that time put in to wrap up boxes only to be ripped apart.  Weird when you think about it.  Joy and jubilation, a mess of wrappings and boxes strewn around, Dave insistent upon cleaning it up as we go, piles of “stuff” accumulating. 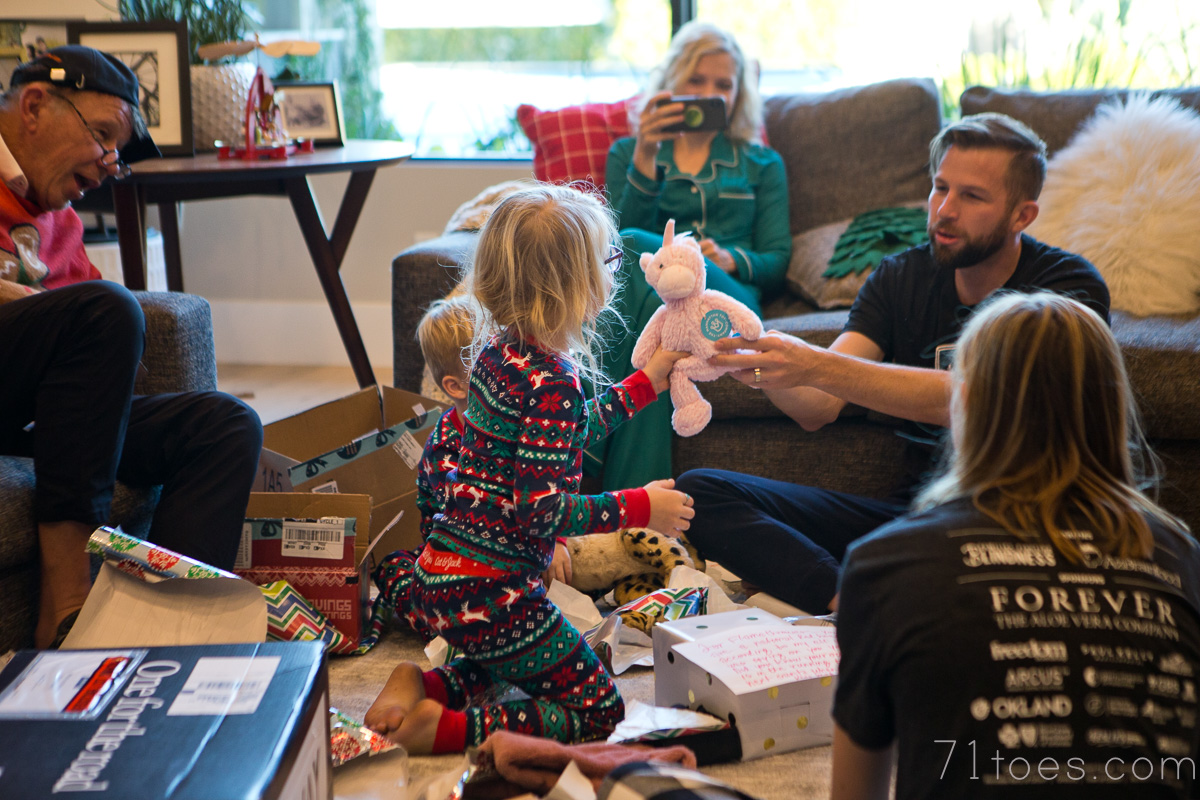 These guys (above) gave me a little nostalgia for days of Christmas past.  Where did my little girls begging for dolls go?  I love the “new them” more than ever, but I miss the “old them” dearly.

And as we slowly opened gifts I loved that Zara kept asking if there happened to be any more with the sweetest little puppy eyes, so I ended up grabbing so many random things (an eraser, some stickers, etc.) to stick in little gift bags to keep the magic going as long as we could 🙂

My favorite gifts to give this year were some books I made. 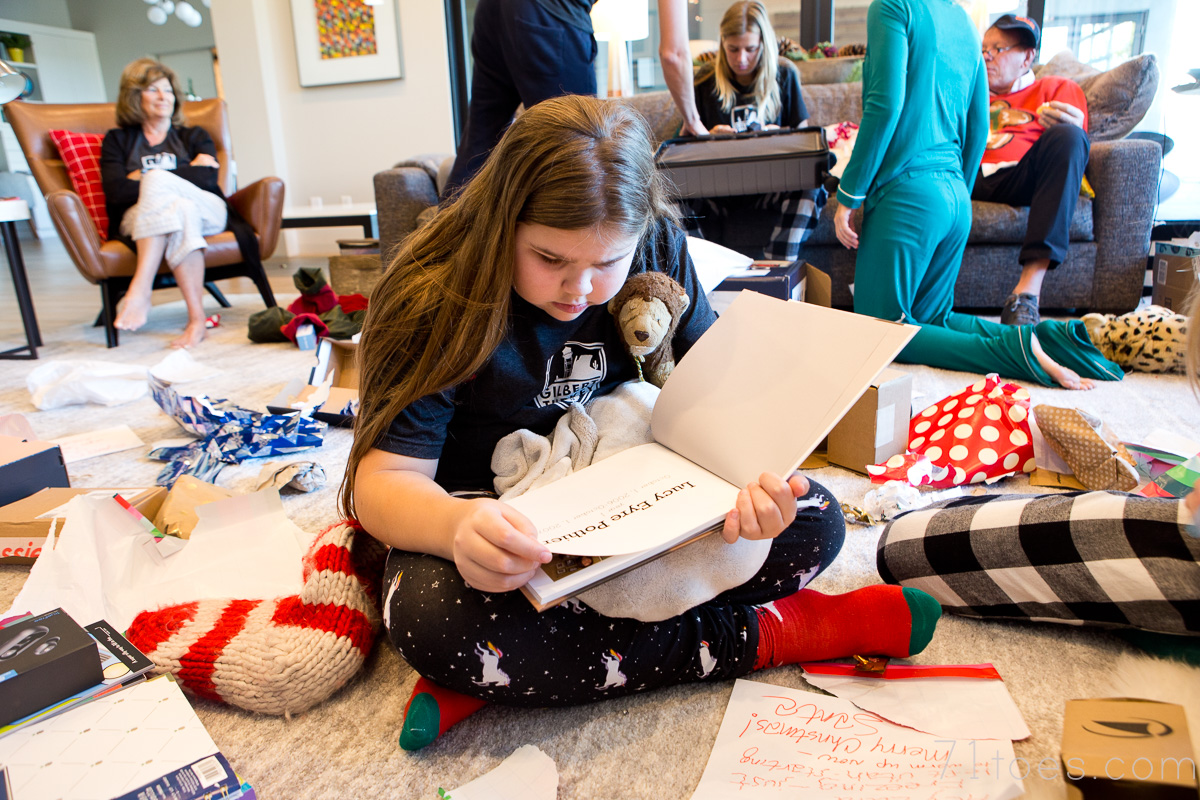 Lucy FINALLY got her baby book twelve years later (she mourns that she doesn’t have one every birthday since that’s what we get out to reminisce on the other girls’ birthdays and I got tired of scrapbooking by the time she arrived, so she was pretty excited). 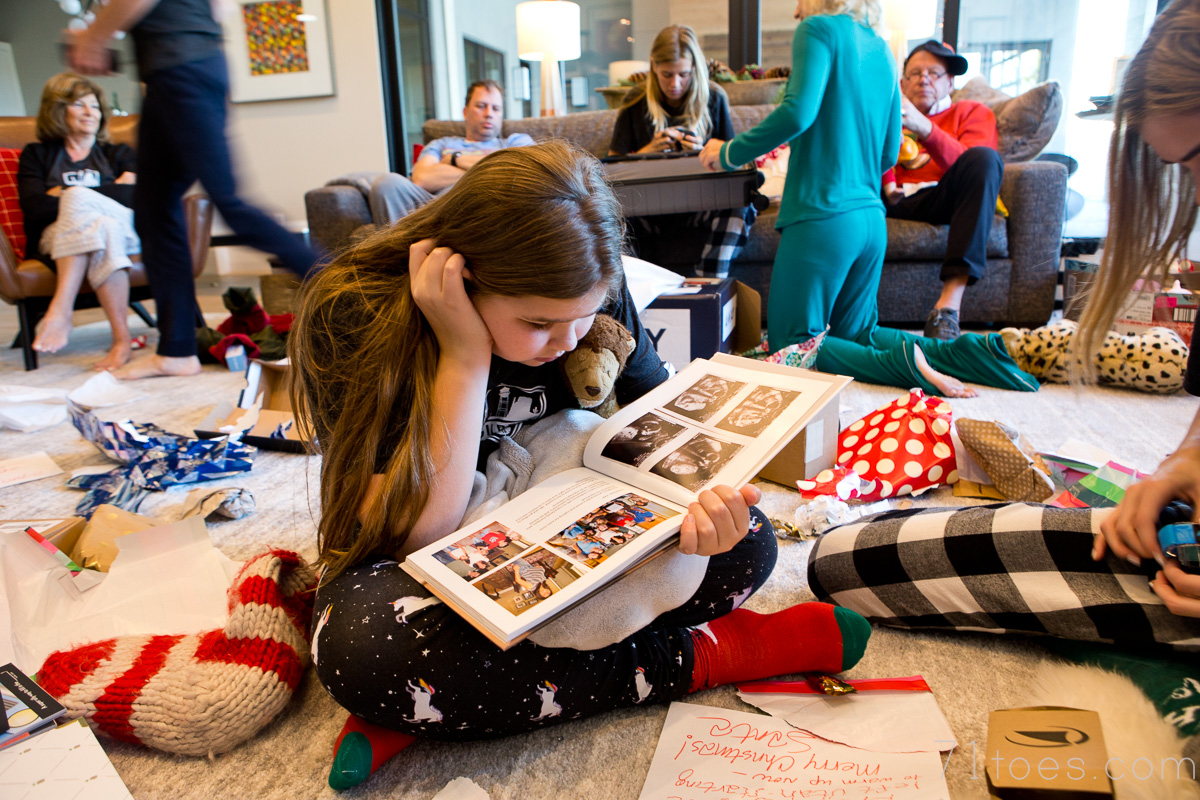 Then it was on to a swirl of eggs benedict prep, mom in the kitchen again, how I LOVED having her partnership standing at those counters washing and creating and mixing all during Christmas and wedding season…and it was EXTRA great to have her there for this tradition that she’s mastered: 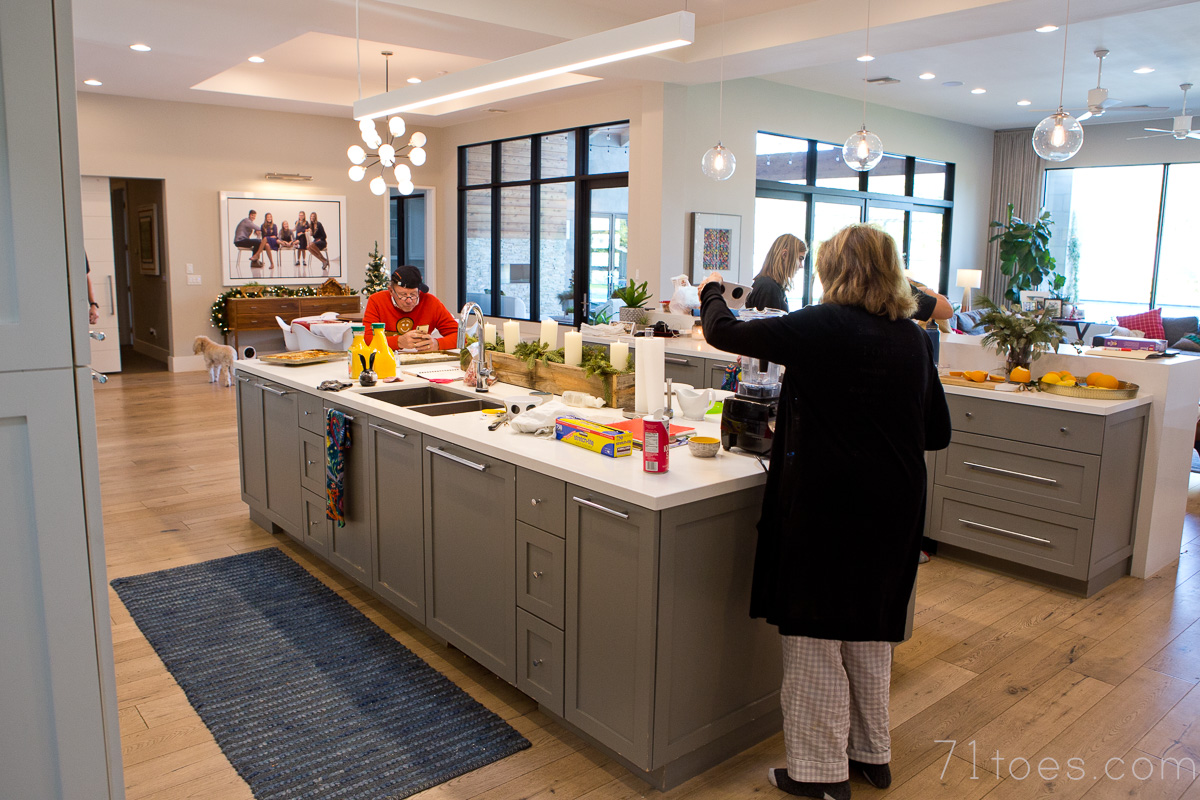 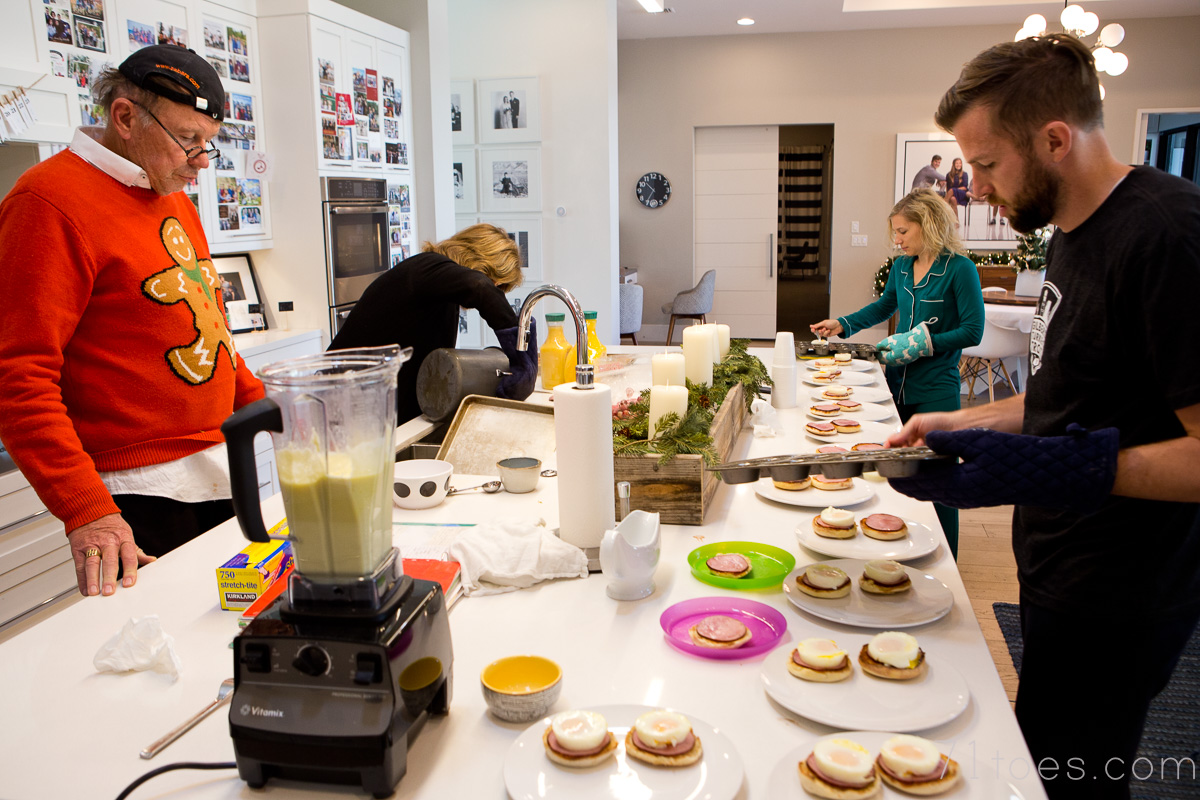 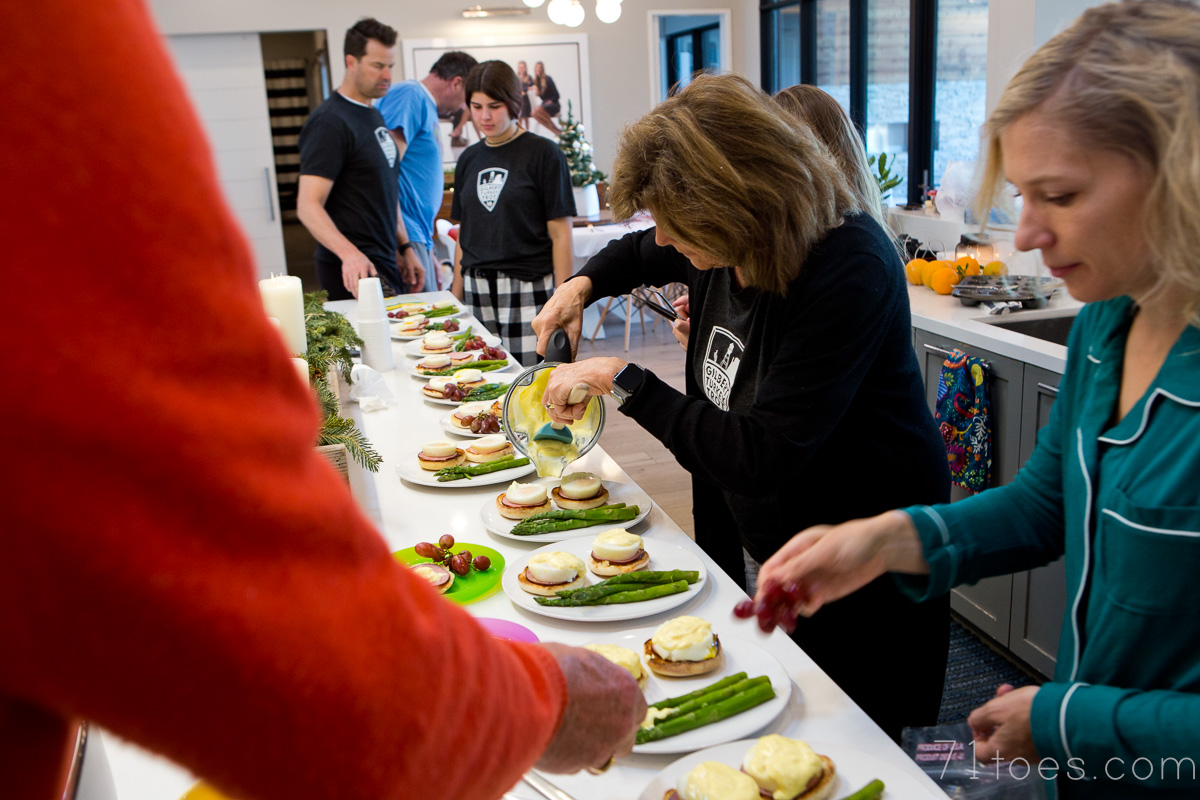 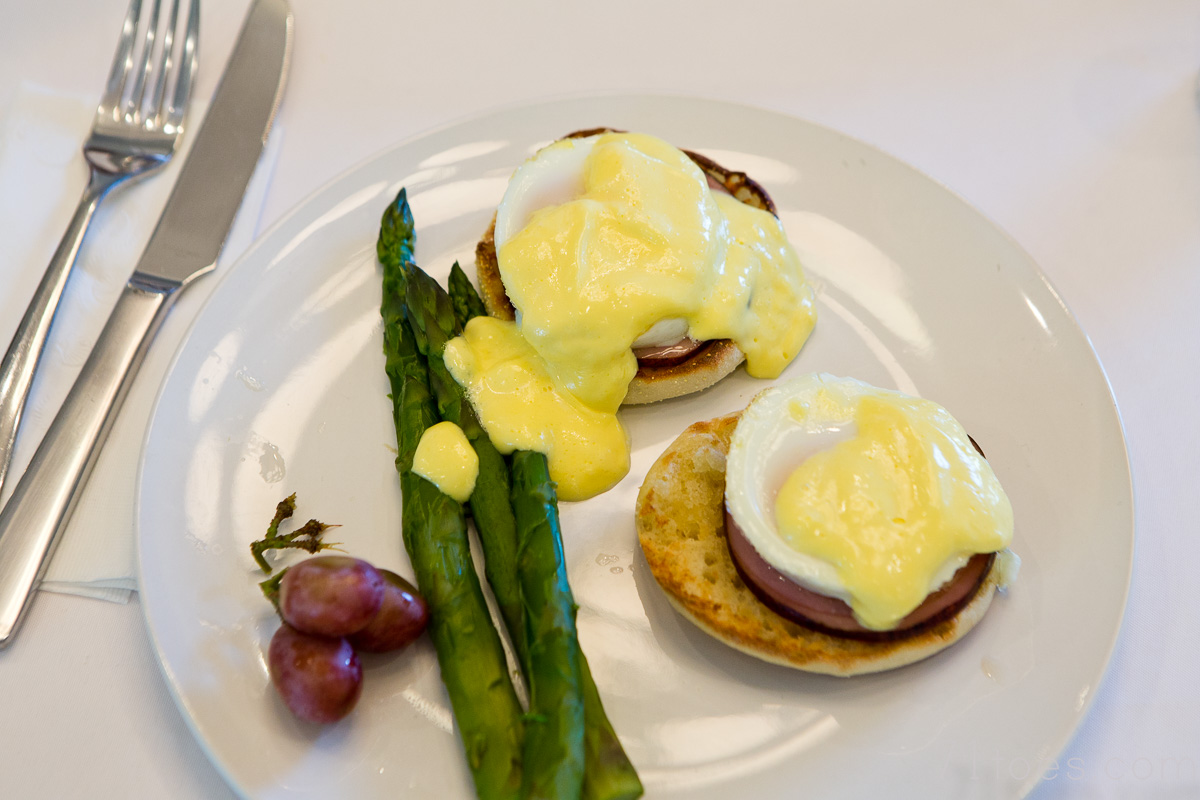 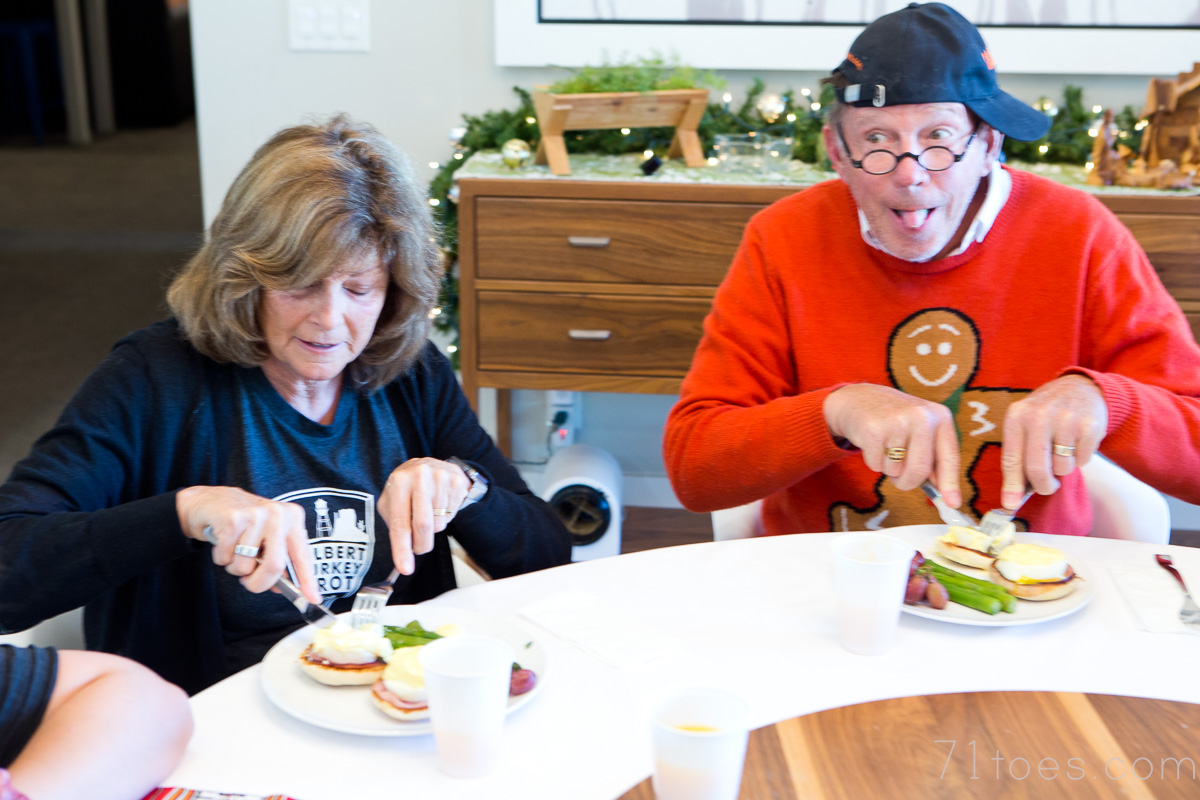 Then another swirl of packing up and hugs and goodbyes as all the guests headed to the airport…we were sad to see them leave, but we knew we were going to see them again in Utah a few days later so we were ok:)


And then…peace.  Just our little family, reduced only by one (but now two with a daughter-in-law), together.  We sat around and basked in togetherness, just Dave and me and our girls.  We know to cherish the few moments when we get college kids home these days, and that cherishing got a little washed out with so much wedding hoopla and so many houseguests.  So we tried to bottle Elle up before she’d be leaving the next day.  We sat around the family room and played chess: 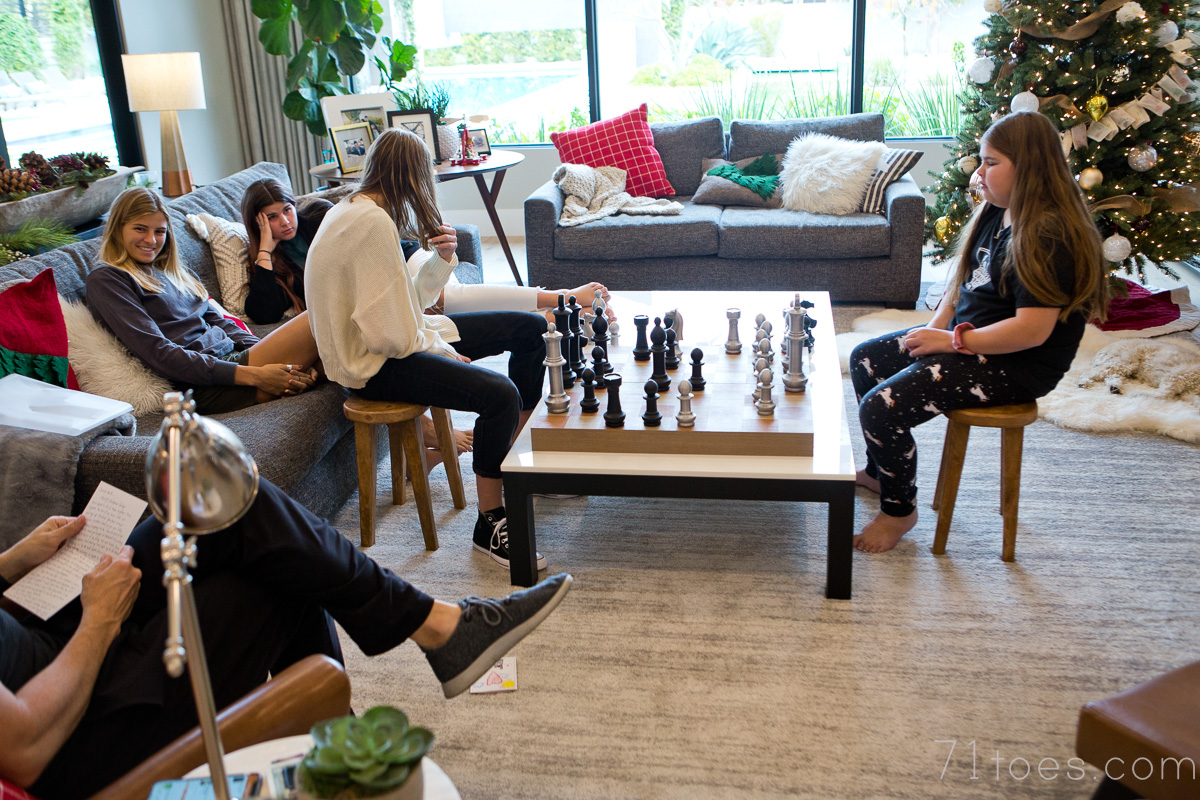 …and Dave explained  compounding interest for New Year’s Resolution ideas.  I sat and loved him from my perch on the couch. 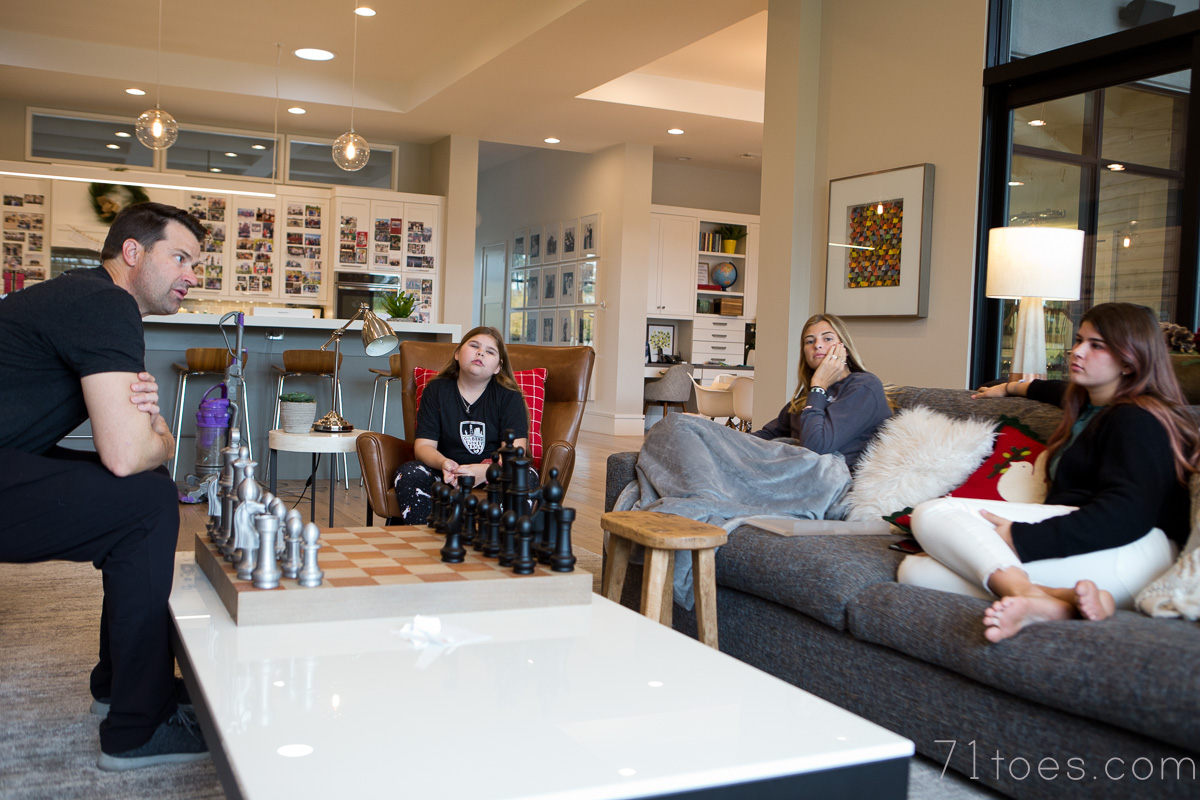 We decorated our family gingerbread house with as much candy as we could possibly fit: 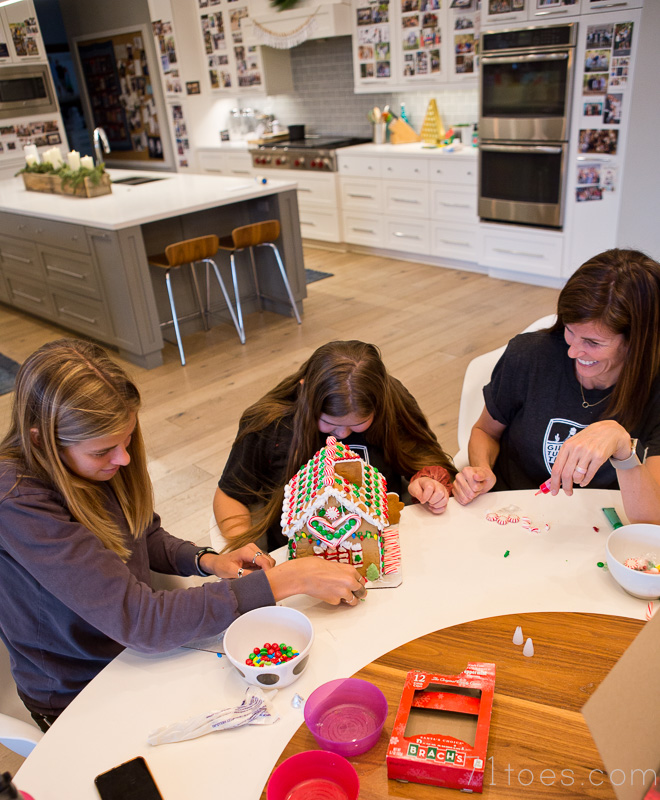 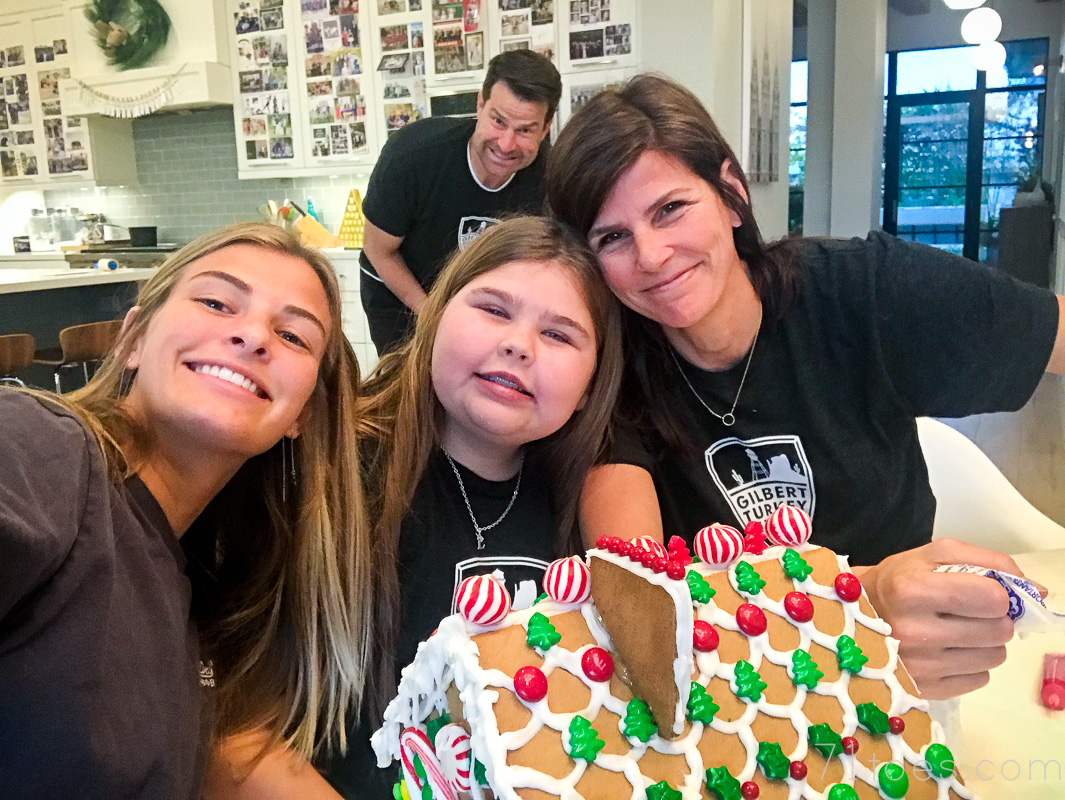 Dave did some funny stuff to figure out our plans for Chrsitmas night: 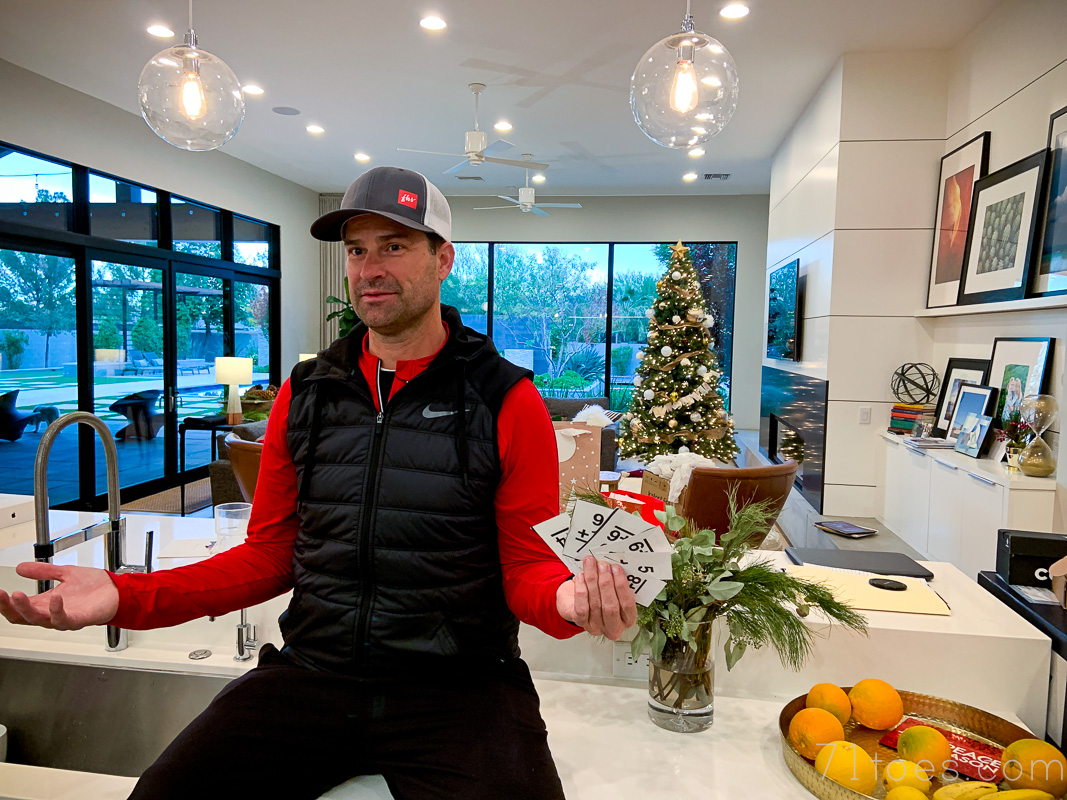 …and we headed out… 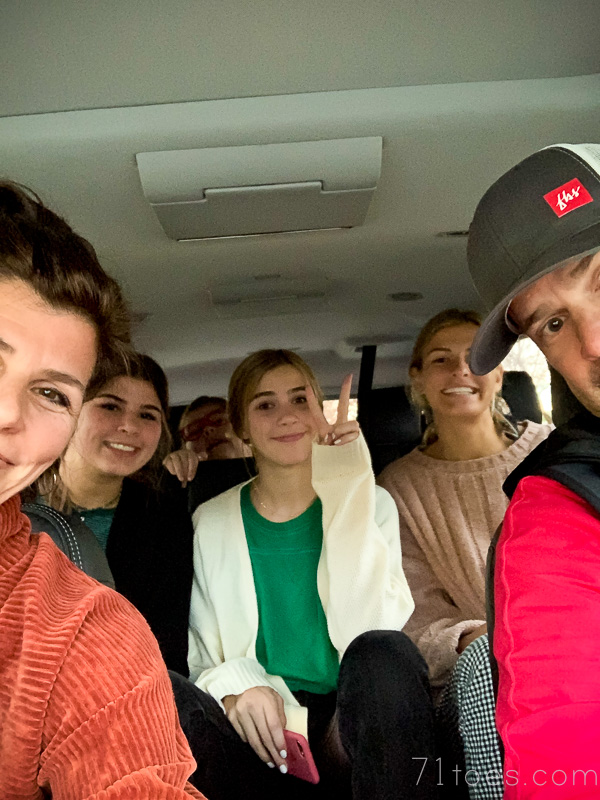 …to Nana and Papa’s to see all the family for just a little: 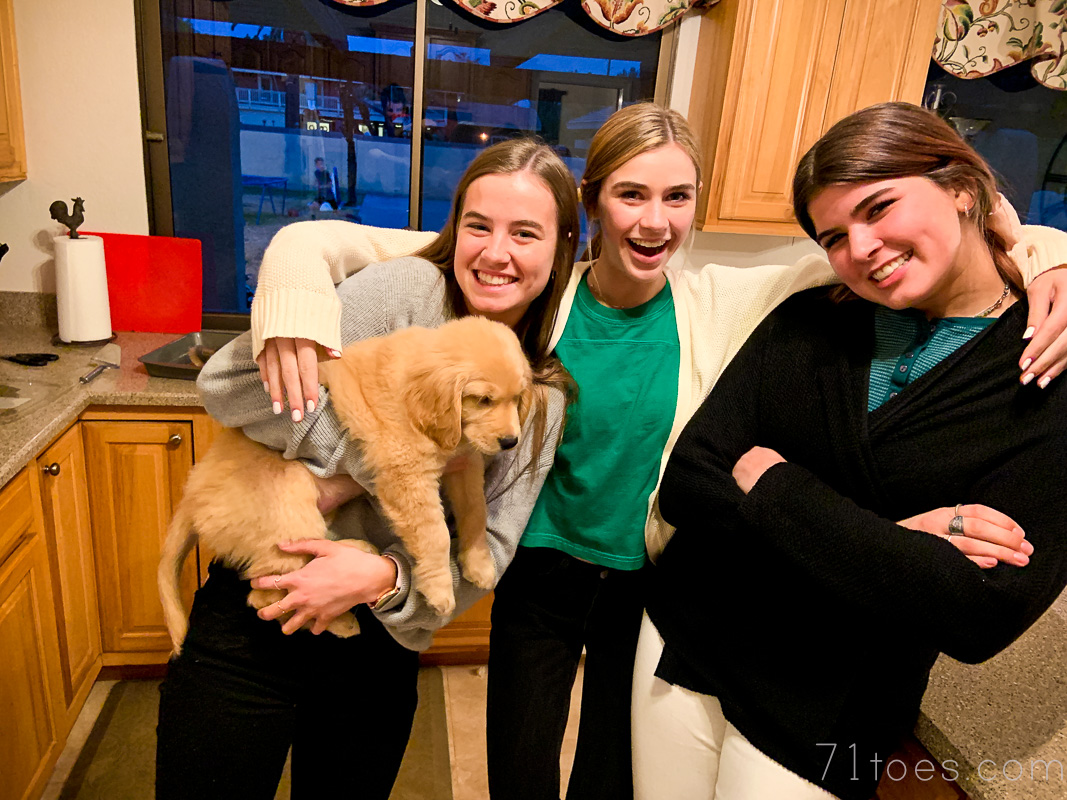 …and then back to teach our girls the “joys” of Settlers of Catan…which they hated.  Ha!

This celebration was for the fact that we were DONE after two -and-a-half hours. 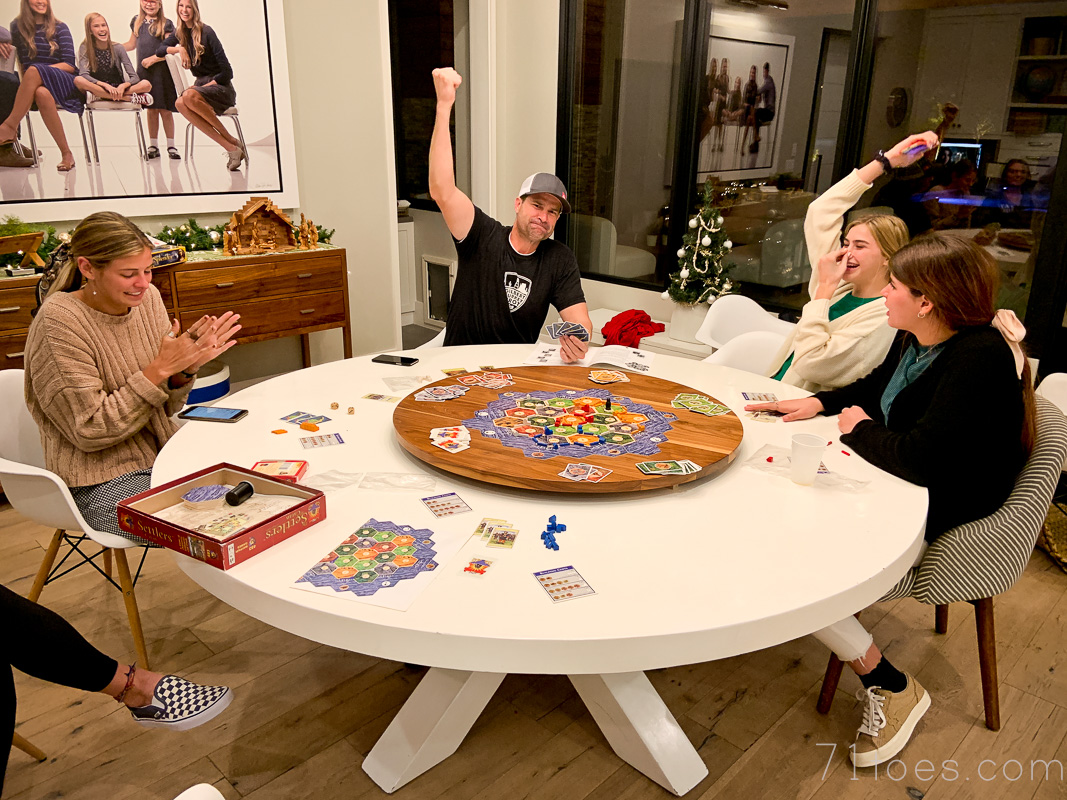 Maybe that won’t be our new family game…Dave and I sure loved it in college.

We played some of our favorites too: 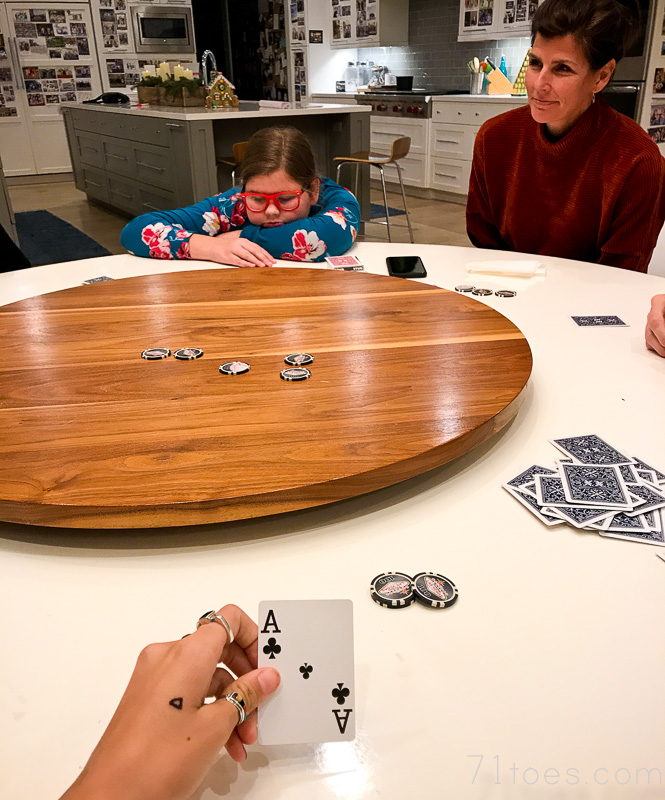 And these girls decided on a Polar Plunge: 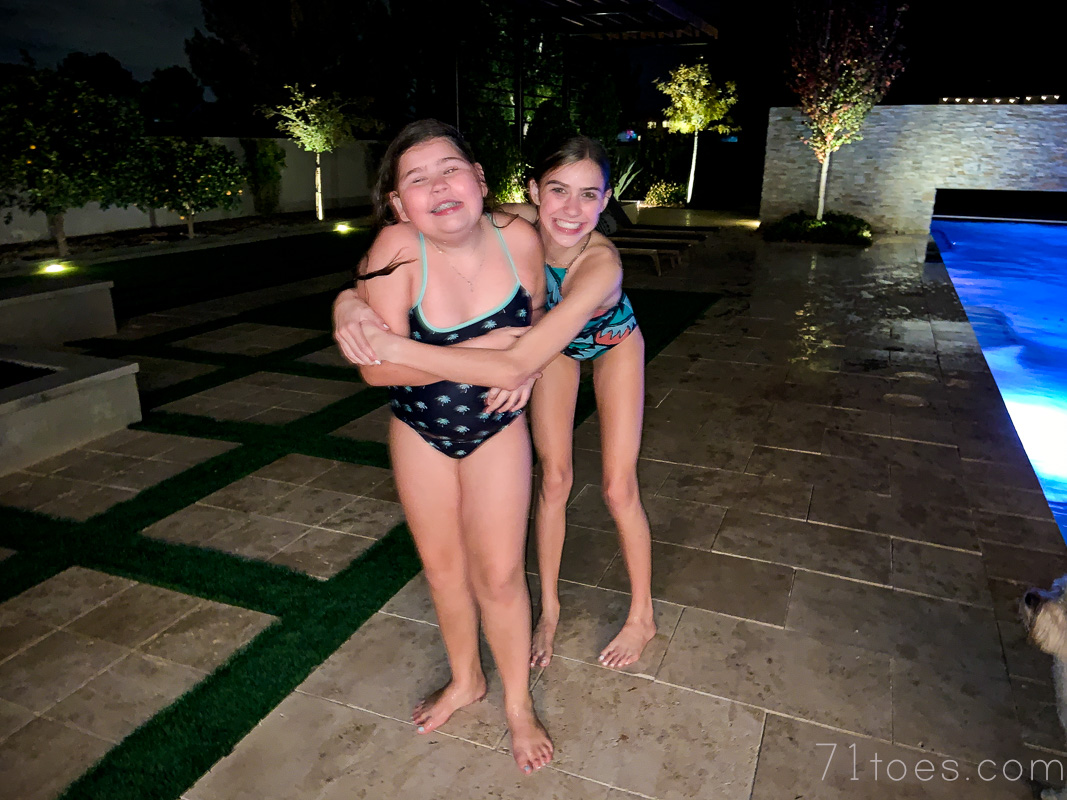 (Well, Lucy decided to do it and Claire got brave enough to join her…twice, both times coming up gasping for breath but delighted as could be.)

Then Elle’s friends came over, and so did Grace’s and Elle packed up for Spain.

Max and Abby showed up past midnight to all of us still in action, so fun to have them back! 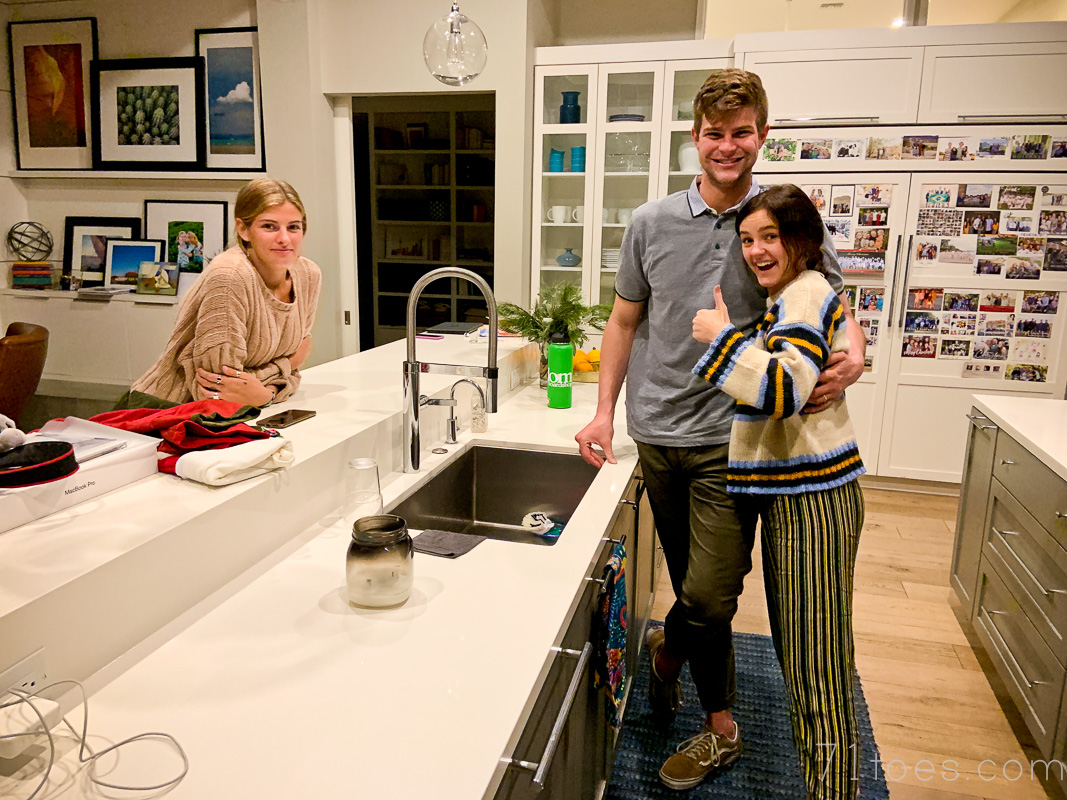 Our whole family under one roof for one night and the next morning.

It was a good Christmas.

Would you be willing to share your process for eggs benedict and the recipe with us? I would sure appreciate it!

I thought I had done that at some point but it doesn't look like I did. Next time I make them I will take pictures to document.

Love your family and your posts! Settlers takes a few times to like…don't let them give up too quick! I hated it the first 2-3 times until I understood strategy a bit more.

Would love to hear more about your compounding interest for new years…you know in all your spare time to write =) And also what program/site you designed Lucy's baby book!
(thank you for what you do to positively influence parenting!)

Thank you:) Dave and I loved Settlers back in college and Elle loves it too, so I think we may be able to win them over some day but we may have to take a break for a little…that was a LONG game!

Dave just talked about how the first months of a goal are the toughest, but if you can stick with them, the small and simple things, they are compounded into some great rewards. more to it than that…hopefully I can get to more explanation some time.

I am definitely planning on doing a post about Lucy's baby book and Max's mission books I made because it's a pretty awesome program that my friend showed me and I think it will help me print more pictures in the future. Hopefully I'll get to that soon!
xoxo