September 18, 2018
Gosh I get to those “little things” updates at the end of each month (last post) and realize there are so many day-to-day things going on that I don’t have pictures of, and that I want to remember.  So here are some “word pictures” (mixed with some real pictures too) of some of the latest happenings around here from what I wrote in my journal…some musings I wrote down last night:

Right now I’m sitting here listening to Grace talk to someone from church in the kitchen, her voice confident and sure, answering his questions about her life and her family.  (She was scheduling her patriarchal blessing…kind of exciting).  This was preceded by an exploration of the contents of my old jewelry box with both my high school girls since it’s spirit week for Homecoming this week and they were looking for “90’s” stuff to outfit themselves in the morning.  I love that those two get to overlap at least a year in high school.  Even if Claire isn’t in student council with Grace, they ride together to school and have this more-strong-than-ever-bond that you can almost feel in the air.  Sure, they fight and annoy each other (and they pronounce the word “annoying” so that it sounds like “annoying-gah” when they complain), but they genuinely love each other lots and it makes me happy.  High school is fun.  Here’s one of the pictures Grace sent of “millionaire” spirit day to our family text yesterday: 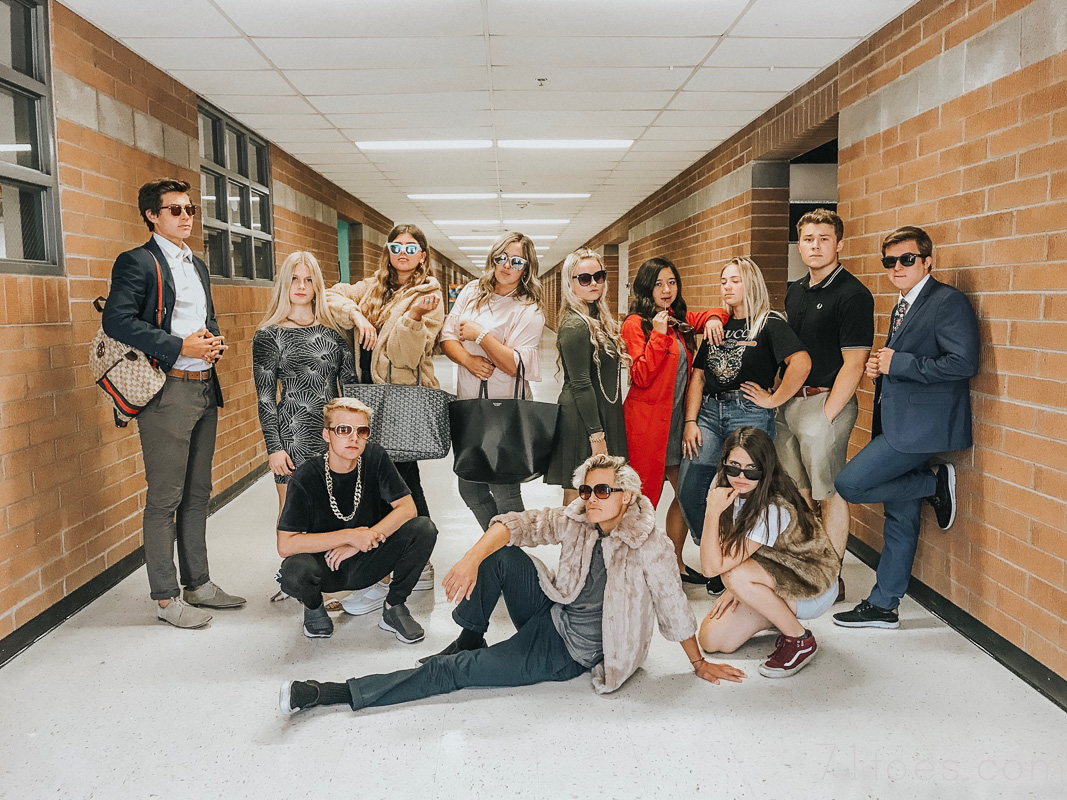 We have recently fixed some lighting electrical issues in our house and changed out our thermostats, which caused some drywall issues around the light switches and thermostats. 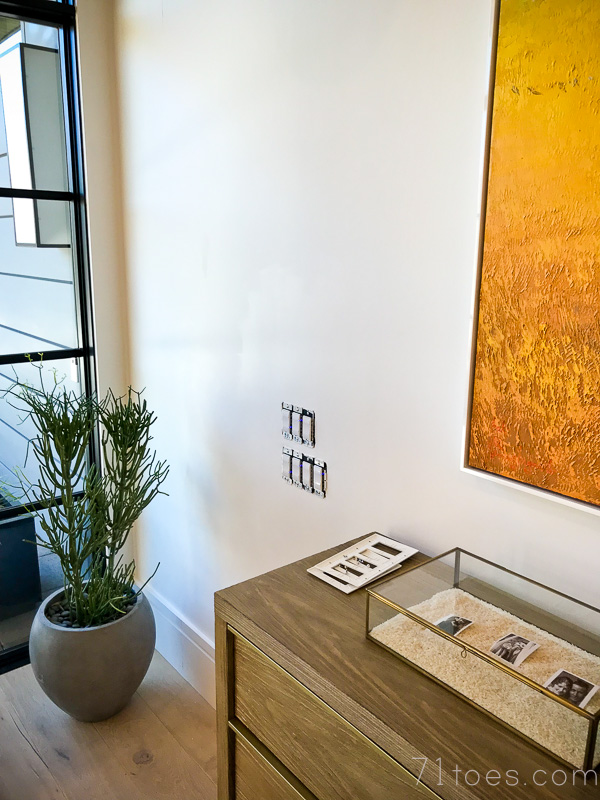 Which led to a domino effect of house projects to fix drywall, then repaint, then our old paint didn’t actually match, so we ended up having to repaint whole walls to cover those little spots, blah blah blah. 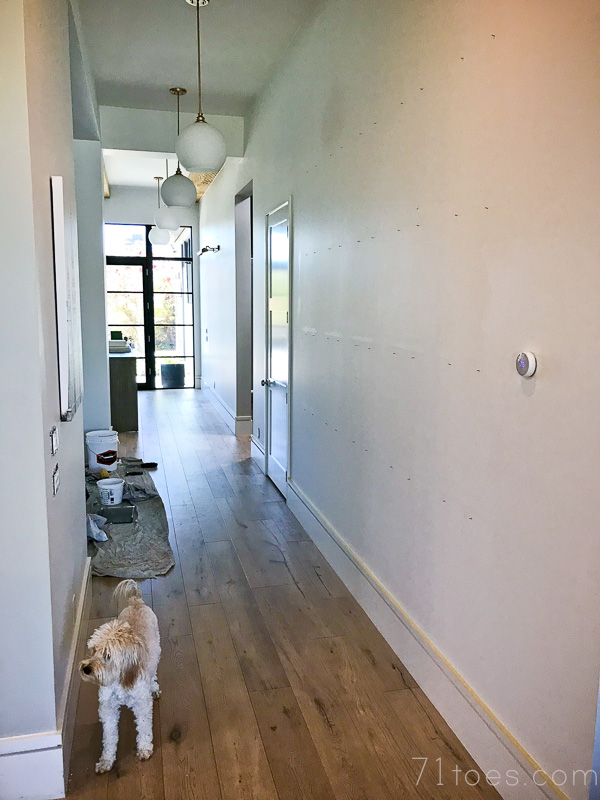 We also finally got around to finishing Max’s bedroom…actually morphing it into a real guest bedroom (still in progress), trying to shift Elle’s old bedroom more officially into Grace’s (we scraped off the green and white striped wallpaper): 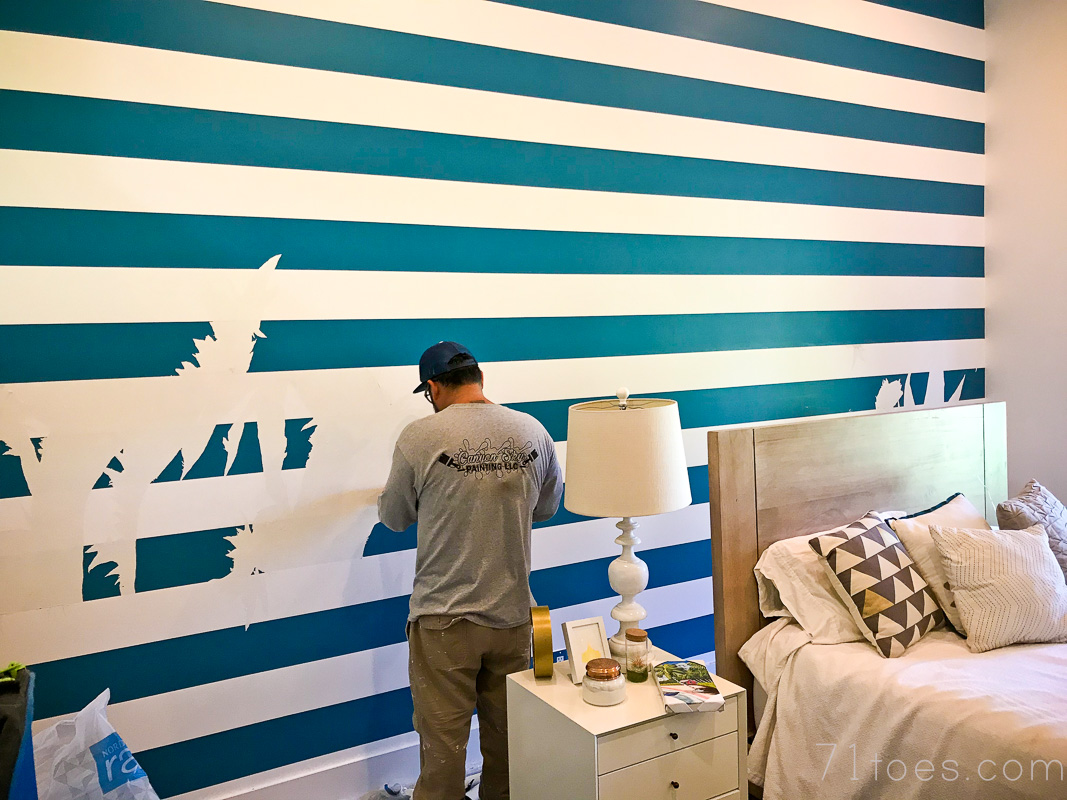 …and got her some new pillows, built out a wall in Lucy’s room that had been a lot of wasted space so we could move things around and added some extra shelves for all her “stuff,” and we are finally making Dave’s makeshift office a “real” office.  These projects have made it a busy “house-fixing” month.  I don’t like house-fixing things because it takes my focus off things that are so much more important, but I do have to say that it feels so nice to get things DONE and to feel like we’re taking good care of this home that is such a blessing to us.

Speaking of that, I mentioned this a little before, but we got mountains of things sorted through for Labor Day… closets and drawers and cabinets all emptied out.  This was much to the chagrin of my children.  We worked for hours letting go of some things filled heavily with memories, and piles and piles of Claire’s clothes that now come up to her knees and elbows due to her crazy growth spurt of the last few months. 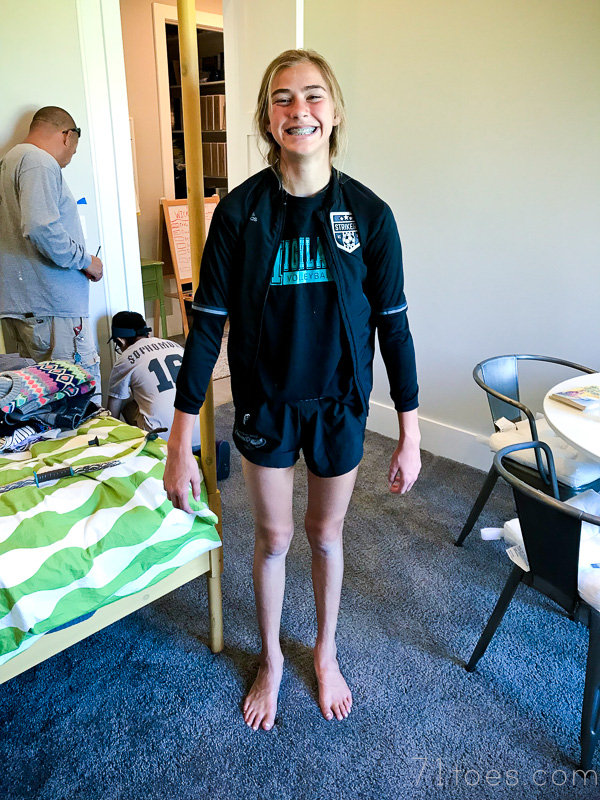 She seriously wore these clothes a matter of months ago! 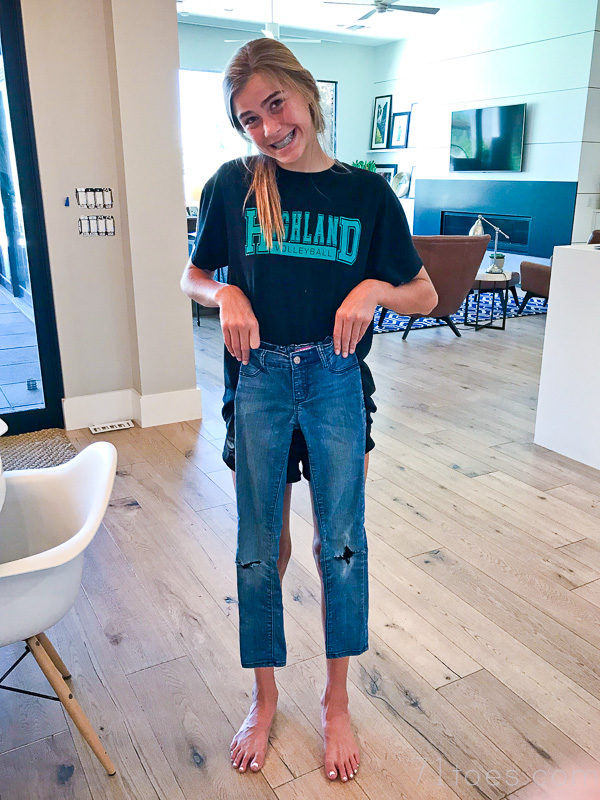 Even those complaining kids felt the glory of a more organized house when we finished.

We also changed Lucy’s bedroom around…my kids’ eyes sparkled at that and made me remember when we did that occasionally growing up and how new and exciting it was.

Volleyball is creeping into the little side-veins of life. We have a LONG carpool that takes forever, lots of games, and a girl who is sparkly joyful because of it all.  She adores it and just yesterday Dave and I looked at each other and just laughed sitting there in the stands watching her serve that ball over and over…after she could scarcely put it half way there a matter of a few months ago.  When Max was playing high school volleyball we had some team moms who loved being involved and did what I’m now realizing was even more than the huge amount I knew they were doing, because man, there seems to be a lot to do that I’ve never done before!  I’ve somehow become the concession stand organizer.  It is a pretty easy-peasy job but still takes some organization.  They asked me to re-take some team pictures that didn’t work with the professional photographer.  For some reason I was thinking it was just the varsity team that didn’t come out right with the professional photographer, but that afternoon before I arrived I got a text about individuals of each girl as well as team shots and that they were waiting for them to be used in the program.  Yikes.  I didn’t have a flash or a tripod but I think they worked ok! 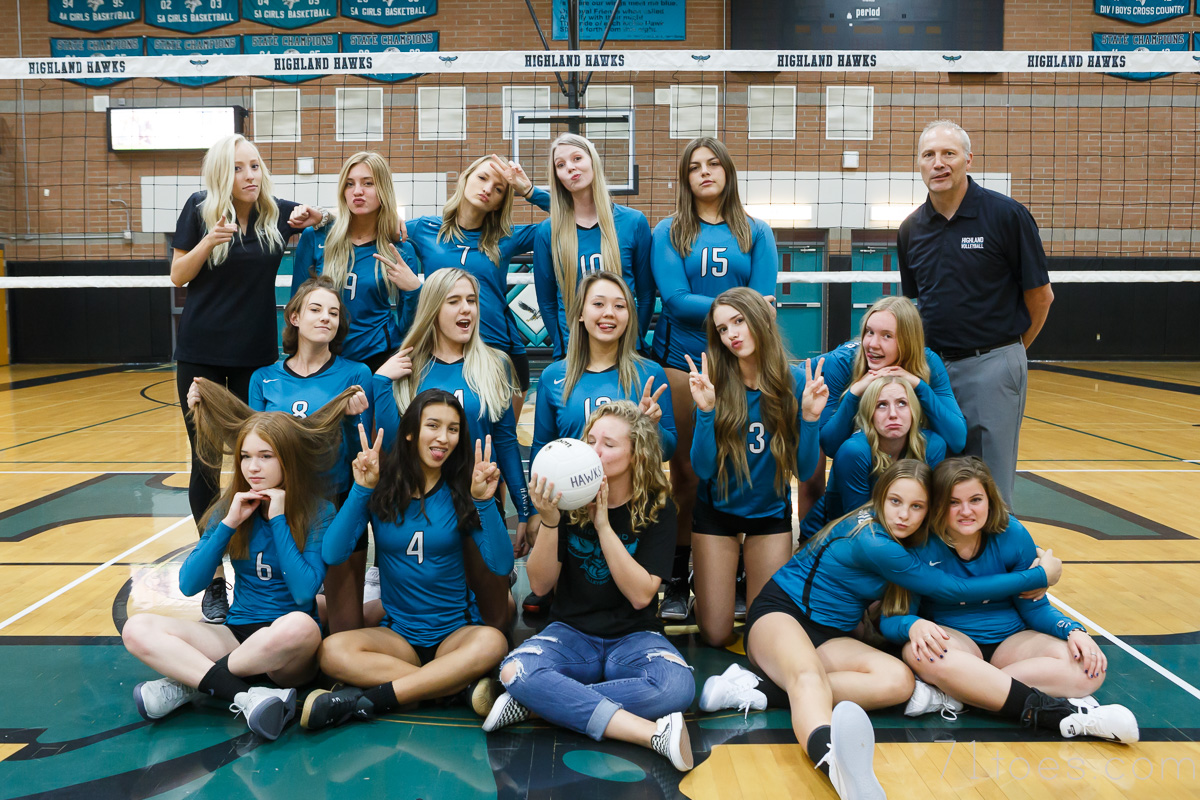 (Ok, that one wasn’t for the program, but you get the idea…)

Lucy and I are really into chess lately.  I’ve been trying to figure out something to substitute for friends since she is always calling them and they are less and less likely to be able to hang out (everyone is so busy with extracurricular things…and different interests too).  She gets better and better every time we play and she loves it.  As we sit opposite each other, the chewed-on-by-Bo chess pieces scattered across the board in front of us, I try not to think about the fact that even this will probably get too frustrating for her to try to see before too long, but try as I might, that sadness creeps in.

That girl jubilantly beat me in chess for the first time on Sunday night.  It was a big win since we’ve played countless times, always ending in her defeat. 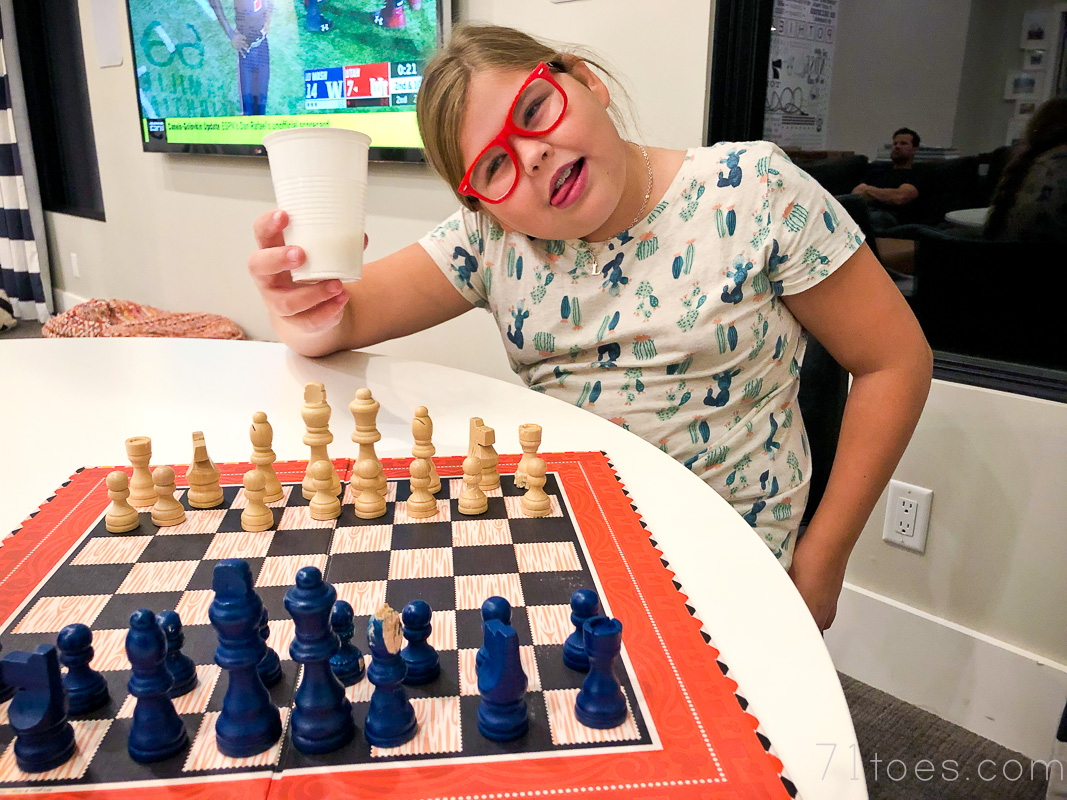 (It’s good to have a little toast with milk for that fun fact:)

Bo plants herself at the end of our bed every night, curled up like she owns the place.  I think she keeps thinking one day we’ll let her stay and not banish her to the laundry room, but at the rate she is still chewing on things I don’t see that possibility in her near future.

It is still SO HOT here, even in the evenings.  I thought it could be time to bring back on the “Family Sunday walks” on Sunday but we were just sweating which brought out some kind of rotten moods.

My fingers are still swollen from my little bike-and-fingers-colliding-with-wall accident in California and my wedding ring won’t fit over my knuckle anymore.  I’m kind of sad about that because first of all, I like my wedding ring, and second of all, I’m not a fan of these swollen knuckles 🙂  Sure hoping that even after three weeks it may go down again??

We had a funny rotation of phone calls to and from our college kids yesterday, Dave and I.  I love when we get a minute to really talk to those two who are going through so many different decisions and life lessons right now.

Lucy and I started packing for Science Camp last night, trying to be sure we had enough warmer gear for the mountains.  We leave tomorrow morning and we are both pretty excited.

Love glimpses into life lately… these are the good things that make up our lives, right? xo

I order many games for my students who are visually impaired from the Braille Bookstore website. They have a nice chess set that has pegs to keep the pieces in their place. If you start using it now, it won’t be any different when she needs the features.
http://www.braillebookstore.com/Chess-Set,-Classic.1

Check out a motivation speaker Molly Burke. She has moved to L.A. from Toronto, choose fashion that reflects her style, colours her hair, applies makeup, goes on adventures and, oh yeah, is blind.

She is an amazing person. And so is Lucy. She is a force that will be reckoned with. She's on a journey that isn't a sporting event, or a mission.

Use the technology beyond the brailer and work that iPod with its built in accessible features. See how Molly uses the Apple tech and claims that she is slow with it compared to other blind people. Lucy, with that iPod and it's features you have opened a door to the world for yourself.

And her amazing new room
https://www.youtube.com/watch?v=rsSCMAPD0Fg

On a side note, can you tell me about that glass case in the corner of that second picture? Are those old genealogy pictures in rice?

Is max dating someone?? 🙂