Lately my life revolves around family Christmas photoshoots and sitting here at my computer editing picture after picture. This is such a busy time of year for photography, but since I’ve shifted around pricing and availability this year it has gone smoother than the last few years (my husband may disagree with me here, but it really is true). I’ve been getting up really early to get through the things I need to do which has helped (although this system has resulted in falling asleep at the computer a couple times). I’ve been trying to figure out if I want to post pictures on a photography blog or go through all the hassle of creating a web site. Hmmm. Maybe I’ll work on that in the new year.

Amidst the photography craziness life keeps rolling along and I had an epiphany the other day. It came after this series of events (a typical day really): 1)realized we were going to be late for tennis class again because I got carried away on photo stuff, 2)combed the neighborhood trying to find Max & Elle to get them to that class (it was a half day at school and instead of the neighborhood being at our house they were spread all over creation except for two of Grace’s friends who were packed in the car with my kids ready for the tennis carpool), 3)pried poor Max and Elle from their equally fun friend activities resulting in tears and picked up the other friend in tennis carpool, 4)watched tennis for a little bit since my kids were begging and I haven’t been able to stay forever, but instead of concentrating on their improving swings, I sat there and worried that I needed to get back home for Claire who was getting dropped off from a marathon day with a friend at Chuck-E-Cheeses, get Gracie’s friends home before her music class, and realized that we hadn’t done her music homework yet, 5)gathered up Grace and her two friends, raced to get the friends home safe and pick up the music carpool, 6)arrived to music class late (again), 7) zoomed off frantically because I was then totally late to grab the tennis carpool 8) raced home to throw dinner together before Dave had to leave for YM, 9) pulled sweet Lucy out of her carseat and stopped to snuggle her for a minute (tough to resist that chubby cuddly gal) and realized the poor girl had totally leaked through her diaper and had been sitting in a puddle for the last half hour (completely good-naturedly bless her heart) 10)burned chicken for dinner to smithereens, 11)made a new dinner with good old canned chicken. (mmmmmmm).

I know, I know, a little organization would have helped here, as it would every day, but somewhere in there amidst all those steps of stress I stopped myself and realized that hey, I’m doing the very best I can right now and it’s ok to be running around crazy, that’s all part of being a mother. What’s important is simply that I use that time to my (and my kids’) advantage. I know, easier said than done, but how about just taking a deep breath and reminding myself that car time is the best time to talk to kids, to hear them interact with their friends, to hear their “happies” and “sads” from the day, and to “be there” for them. One of my very favorite quotes on motherhood is from Anna Quindlen’s article called “On Being A Mom.” The whole thing is so darn good, but these are my favorite parts that I think about pretty much every day when things get crazy:

In talking about how her babies are now grown, she says, “Everything in all the books I once pored over is finished for me now. Penelope Leach., T. Berry Brazelton., Dr. Spock. The ones on sibling rivalry and sleeping through the night and early-childhood education, all grown obsolete. Along with Goodnight Moon and Where the Wild Things Are, they are battered, spotted, well used. But I suspect that if you flipped the pages dust would rise like memories. “…the biggest mistake I made is the one that most of us make…I did not live in the moment enough. This is particularly clear now that the moment is gone, captured only in photographs. There is one picture of the three of [my children] sitting in the grass on a quilt in the shadow of the swing set on a summer day, ages 6, 4 and 1. And I wish I could remember what we ate, and what we talked about, and how they sounded, and how they looked when they slept that night. I wish I had not been in such a hurry to get on to the next thing: dinner, bath, book, bed. I wish I had treasured the doing a little more and the getting it done a little less.”
Man, it makes me tear up a little every time I read that. And every time things get crazy (which is continually) I just need to stop and take a deep breath and really listen to all the wild stories my kids ramble on to me about friends, soak up that time sitting next to them on the piano bench helping them plug through their lessons for the week, enjoy eavesdropping on conversations ensuing in the back seat amongst a load of stinky, silly boys on the way to cub scouts, and realize that being a few minutes late to tennis lessons is actually a good trade-off to hearing about the amazing kick-ball game that occurred during lunch recess at school. Ten years from now the memories of things that made up our relationships is what’s going to matter most, not what I gave to my neighbors for Christmas or how I really should have had the carpet cleaner come more often. My epiphany was simply that as a mom, I’m going to be running full-speed most of the time. But if I can enjoy the journey more it’ll make all the difference.

So the next day, when Gracie asked once again if I could walk her to school, I let all the jumble of morning stuff waiting to be tidied and finished wait a little longer, took her hand, and enjoyed the cool, crisp morning air as we strolled off to school together. (Luckily Dave was able to stay with still-in-PJs Claire and sleeping Lucy.) 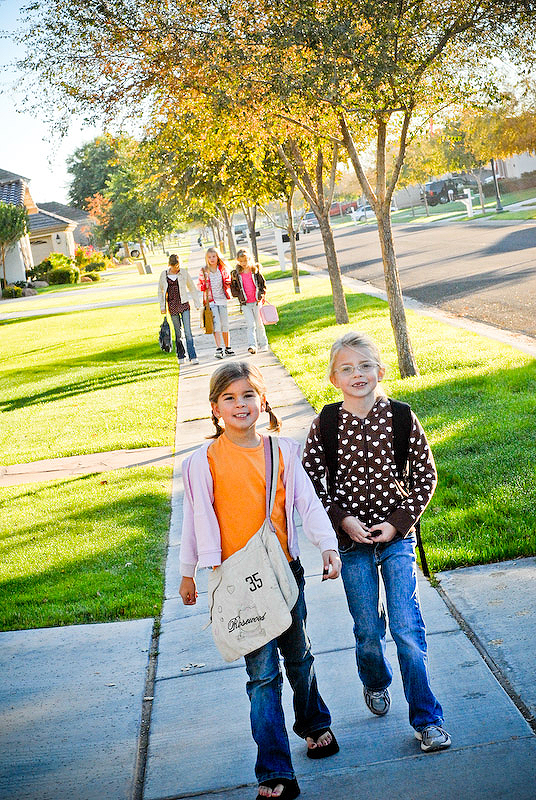 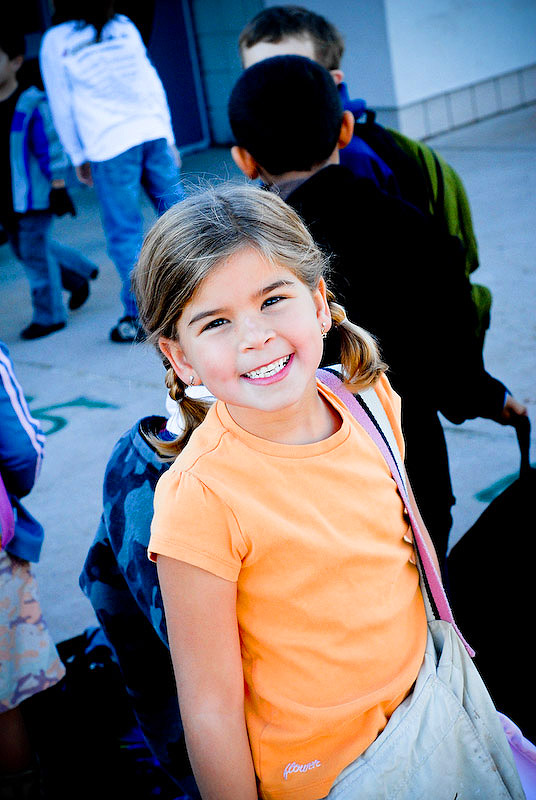 At least that’s one morning I can look back on and remember that yes, I was “there” and we both loved it.

Mother’s Day and the rippling effects of the...

infiltrating our children with things we love

Friday q&a — babies, lots of them

music that moves me

Wow! I got exhausted just reading about your day! But the post ended up so sweet. Thanks so much for sharing ups and downs. Happy Holidays! I was happy to hear from you this morning 🙂

Thanks for helping us all realize this important bit of life’s joy! It helped me and I don’t even have kids yet!

Amen! I loved your photos. And I am a very jealous gal in CT who is lookin gat your gorgeous green grass, bright sunny sky, t-shirts, flip-flops, and leaves still on your trees. I am feeling major bummed that I got conned into living on the east coast! What was I thinking. We are never going to leave…

Also, I started a blogger page for my photography months ago but never loaded anything on to it. I can’t decide if I want a real website or this. I think I am going to do a blog site and eventually someday when life gets quieter move in that direction. Can’t wait to hear what you decide on.

Shawni,
I feel so many of the same emotions, but you express yours so beautifully.
Our address is 3149 E. Ellis. The rest of it is the same.

I LOVE reading your posts! Today was a day that I needed to hear another mothers ups and downs and it made me feel that I just might be normal. I totally cried for some reason. Thank you for sharing.curtie

I LOVE reading your posts! Today was a day that I needed to hear another mothers ups and downs and it made me feel that I just might be normal. I totally cried for some reason. Thank you for sharing.curtie

I LOVE reading your posts! Today was a day that I needed to hear another mothers ups and downs and it made me feel that I just might be normal. I totally cried for some reason. Thank you for sharing.

I was just thinking about when I was a kid and how many memories I made that my mom had no part of. I remember so much more of my growing up than she does… and I don’t feel bad about that and neither does she, but its just weird to think about how the owner of the “moments” change. For the first two or three years, when your babies hardly leave your side, you have all these memories of them that they don’t have. And then, all of a sudden, it switches, and your child owns the memories, and you just get to have little glimpses (usually when they are asleep).
So, I too wish I could just peek in on my kids lives every moment of every day, but oh well. Just think how bad it will be when they are teenagers! I think you soak it in better than anybody I know.
I should be doing laundry right now…

Shawni I think you have it figured out. I’m trying to enjoy the ride a little more!

Shawni, you are one great writer, and an even better mother! Sure love being in your head because it reminds me so clearly of when I was there. Keep writing!
Love you,
Mom
P.S. Love your comment too Aja. I’ve never thought about that. So true!