Home the 4th in the South

the 4th in the South

July 25, 2014
The 4th was super low-key in South Carolina (Pawleys Island for those who asked in the first post).
Dave and I beat our bout of jet-lag and got up for a semi-early walk on the beach. 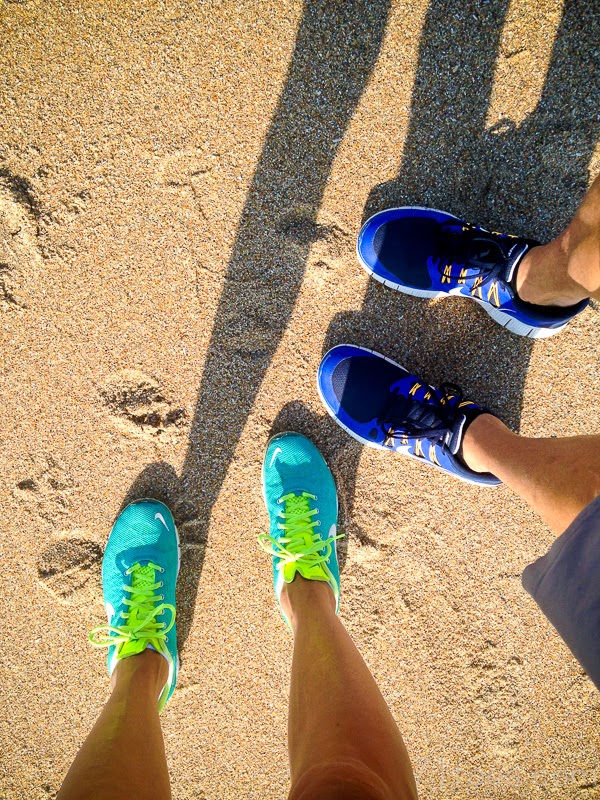 It was a great way to start off the 4th.
That followed by our own personal little neighborhood golf-cart-and-bike parade?  Can it get better than that? 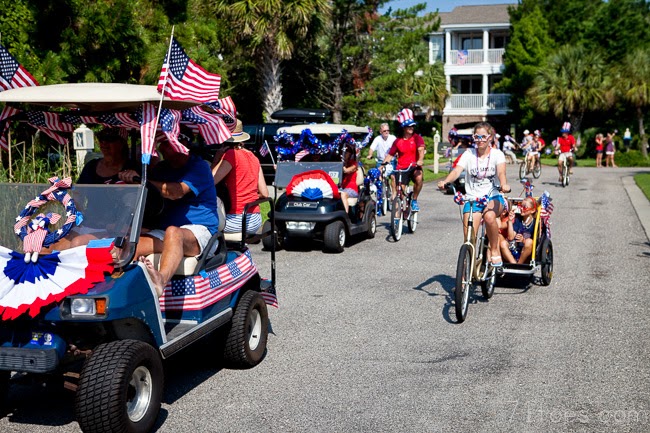 Apparently everyone in Pawleys Island was caught up in the whole decorating-your-vehicle hoopla that day because the only thing the boys could find at the local convenience store were cleared out empty shelves and these two little doilies the girls are holding below.  Luckily the house we were renting had a little bit of festiveness we could add to our doilies. 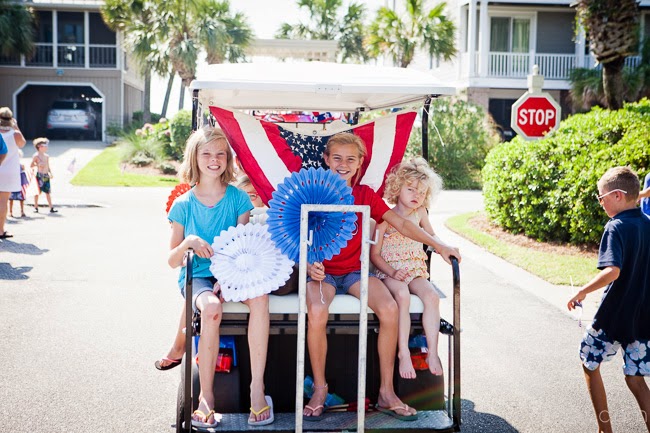 But our small amount of decorations in comparison to all the other decked-out carts and bikes didn’t seem to daunt the jubilance of the passengers and the “captains.” 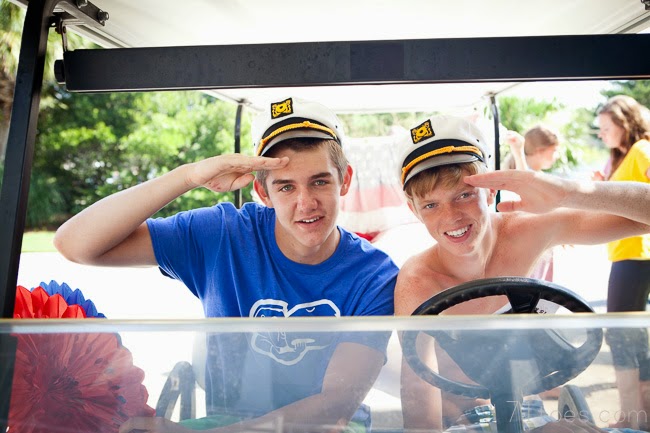 I mean, they got to be in a parade, for crying out loud!  Not much better than that.

Lucy had a vice-grip all day long on an American flag she found. 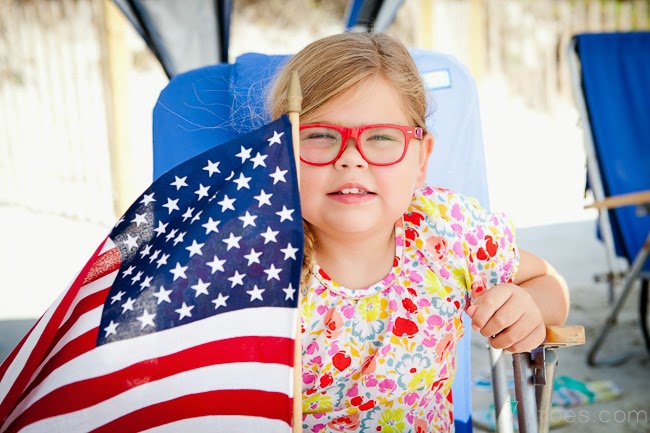 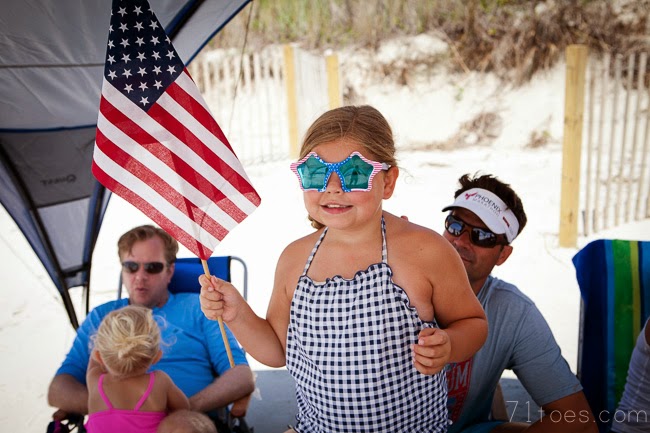 Claire morphed into a mermaid: 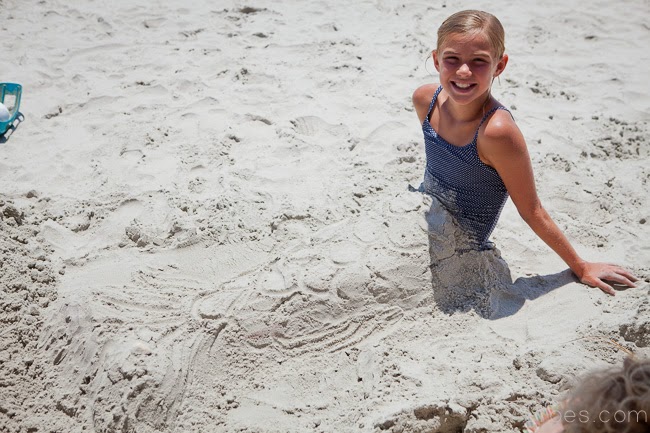 …and some others joined in.  Mermaids scream “I love America” like nothing else, don’t you think?  Ha! 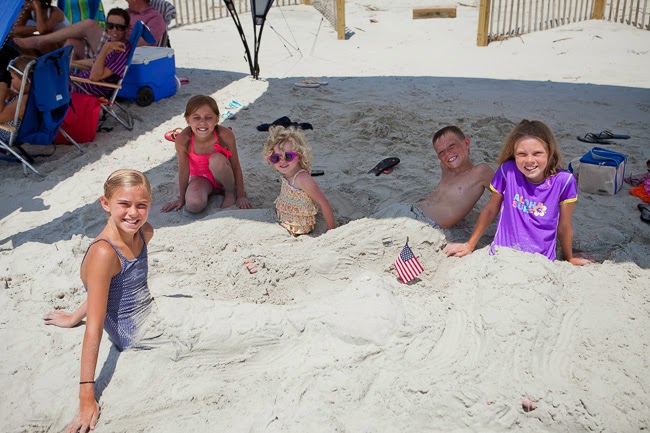 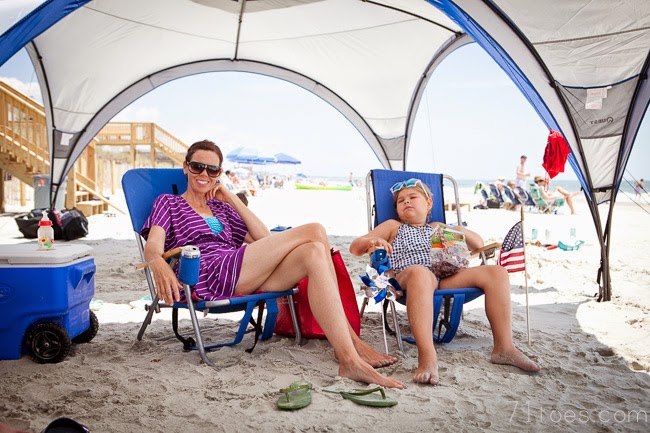 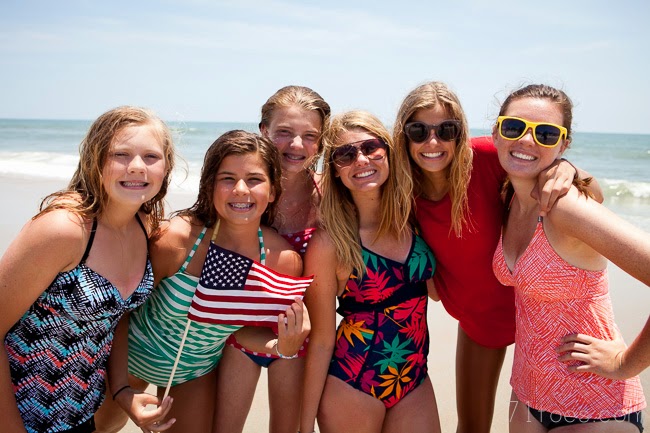 After a day in the sun and sand and mermaid-land, we had a bbq. 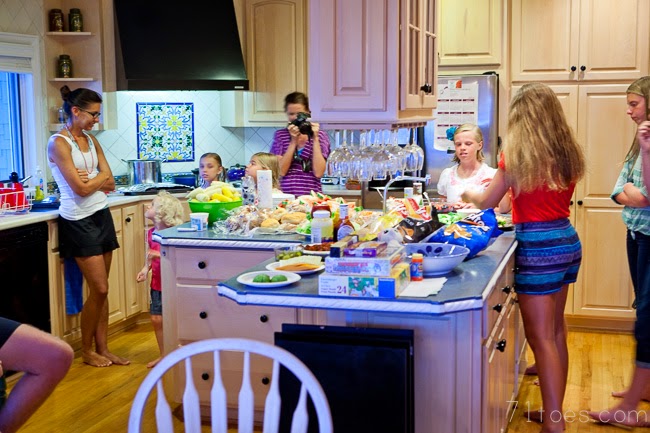 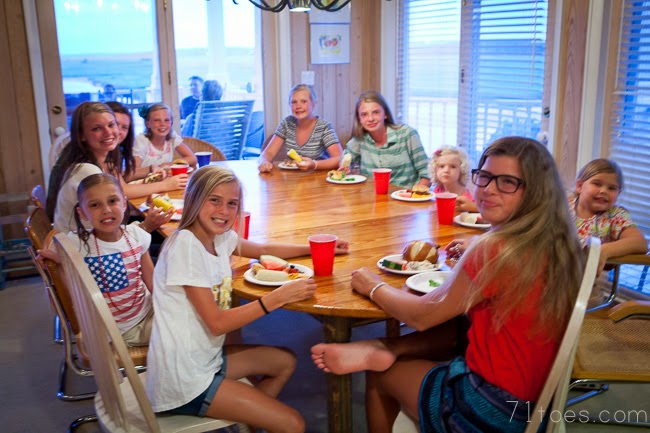 And watched the gorgeous sunset over the marsh. 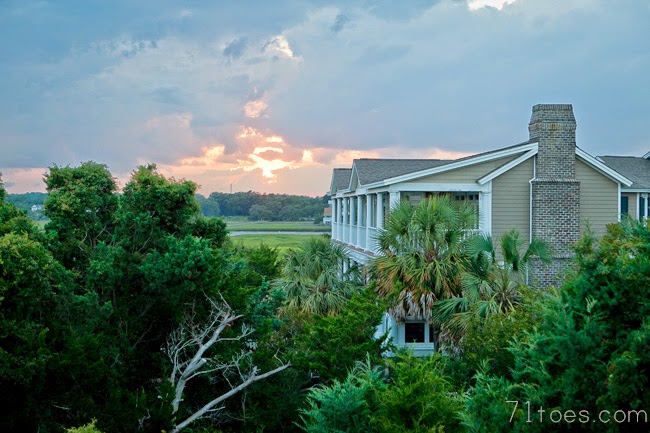 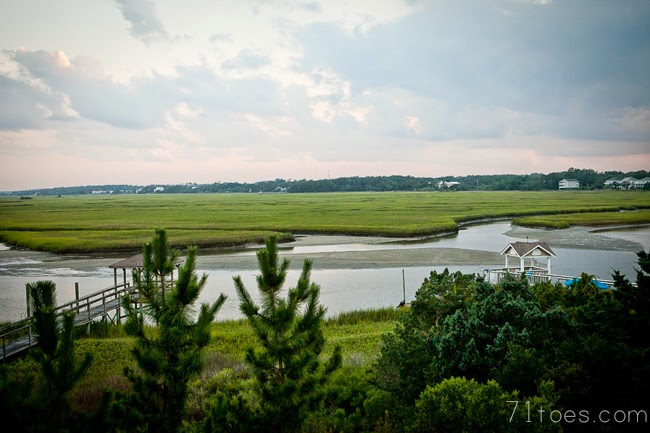 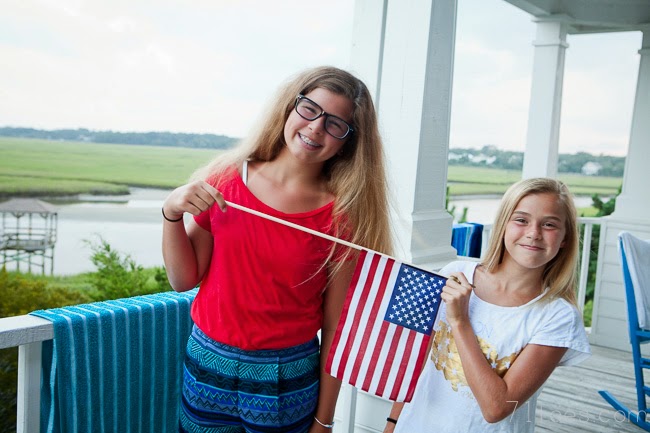 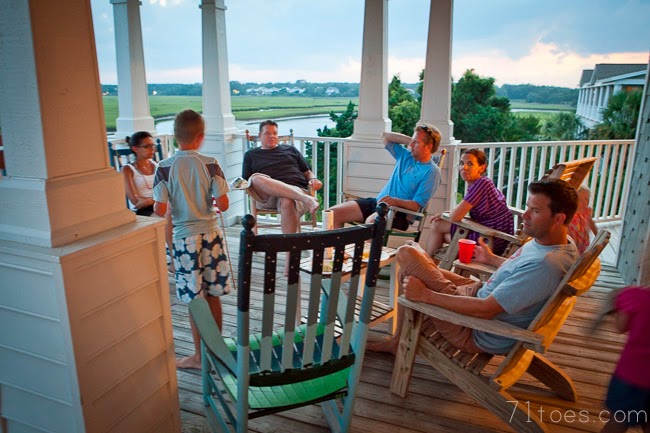 The night before the 4th we had assigned each child twelve and up to give us a little report about one of the Founding Fathers to help celebrate the next day.

I loved the feeling of sitting out on this deck listening to these great kids report on fabulous men who did so much for our country.

The sky became darker and richer filling in around us, my heart became fuller, and the sound of the first fireworks going off on the nearby beach became louder and more frequent. 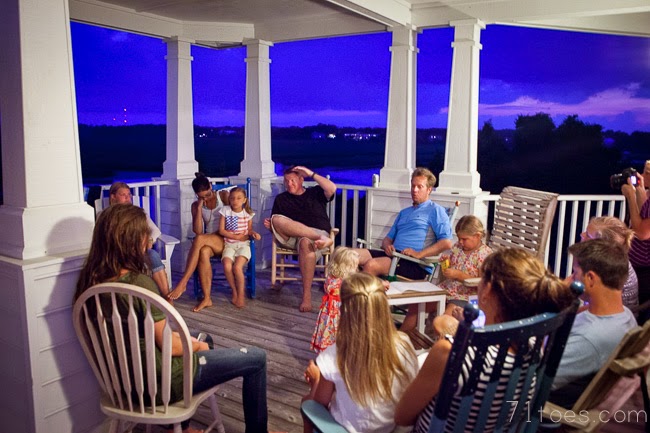 …and of course, a little volleyball never hurt any ambiance in my humble opinion: 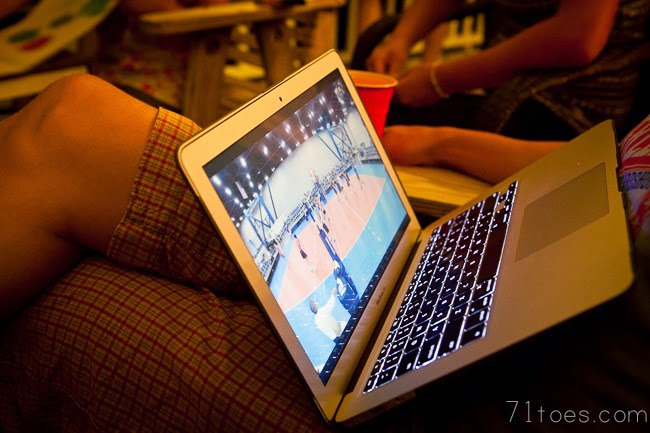 After our little 4th of July Founding Fathers reports we headed to the beach to watch fireworks go off in every direction while listening to the waves roll in beside us. 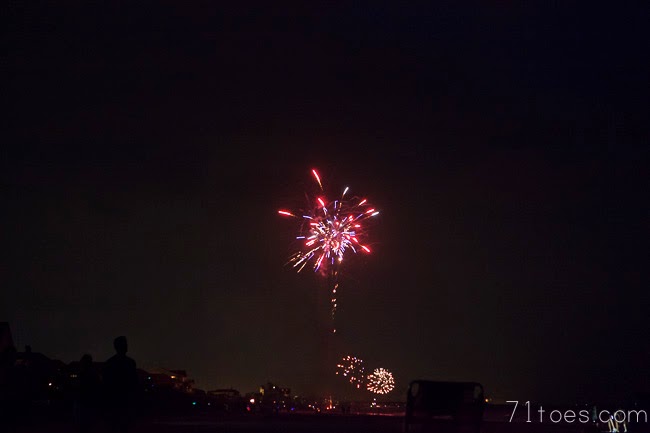 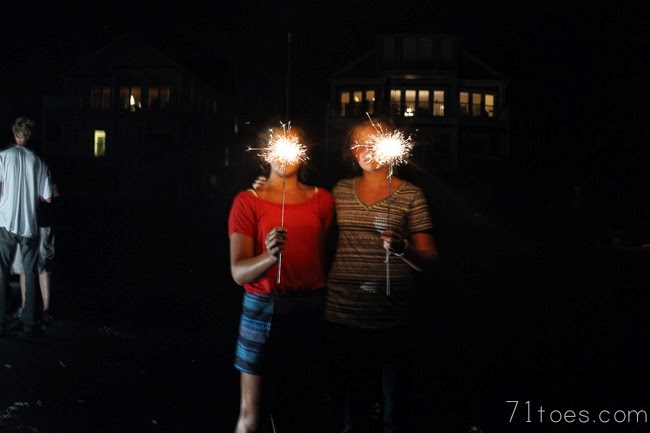 SO grateful for this great country of ours.

Awesome! I love to journey with your family to these fabulous places and feel part of these amazing experiences. Thanks for sharing.
Lisa in Seattle

The 4th at the beach is something we've always wanted to do – next year is finally the year, but it will be Tybee instead of Pawleys. So glad y'all got a chance to visit our coast for the holiday! xo

Love knowing what you were doing while we were celebrating in Paris (Idaho).

Crazy question, but do you have to have any info on the sun shade you were using at the beach?