On the blog today are some thoughts about the beau

August 17, 2015
As schedules start seeping into every nook and cranny of life, the lazy days of summer are melting away.
My goal this week is to catch up on documenting summer thoughts and feelings.  I feel this urgency to get things written down before my heart turns to mush when we hit stage two of our parenting adventure next week:  going from five kids under our roof to four.
I cannot talk about that right now because I’m not quite ready, so let’s skip back to those lazy days of summer for a little bit.
When I was a younger mom coming to Bear Lake for our reunion all the way from D.C., I stretched out that stay as long as I could.  I went from juggling one baby, then two, then three on those long cross-country flights.  They made me sick to my stomach with worry about which curve-balls those babies would throw me en route, but the worries were overpowered by the sheer excitement to catch up with family.
And then when we moved to the desert I was pretty excited to escape the “oven” we live in here for as long as I could during the summer.  As my sisters and then sister-in-laws had their own kids they joined in too…we adore that place and the lazy beach days where all the cousins will play in the sand for hours on end and we will talk up everything under the sun.
Now everyone stays as long as they can up in that little spot of paradise.  Most of my brothers have lucked out with jobs that they can do remotely for at least a little bit and a couple of them happen to have conferences in Utah in July so their wives and kids stay up at the lake for as long as possible.  I think they’ve fallen in love with that place and the bonding that takes place up there each summer just as much as we have.
But summers get more complicated the older our kids get, and this year I felt like I was zipping in and out of that place like a bee to honey.  I put over 6,000 miles on our car driving all over creation getting kids to and fro.  This is the first time I did the drive alone (with the kids but without Dave) both ways.  I will be the first to say that I adore a good road trip.  Nothing better than having kids confined in a small space for discussions and relationships.  But I’ll also say that boy oh boy was I ever happy to drive into our driveway that last time.
Here’s a little snippet of the mid-July drives.  After the reunion and Jackson Hole, Max, Dave and Elle had to head home.
I tagged along because we have a companion pass and I wanted to see my sweet nephews.  One of them was leaving for his mission in New York City, the other one had recently returned home from Brazil and they were both speaking in church the same day.
We had one last day all together at Bear Lake on our way out of town, and Dave’s business partner from China joined us (he had been in Salt Lake city for a business conference).
This is the only picture I got of him (thanks to Elle). 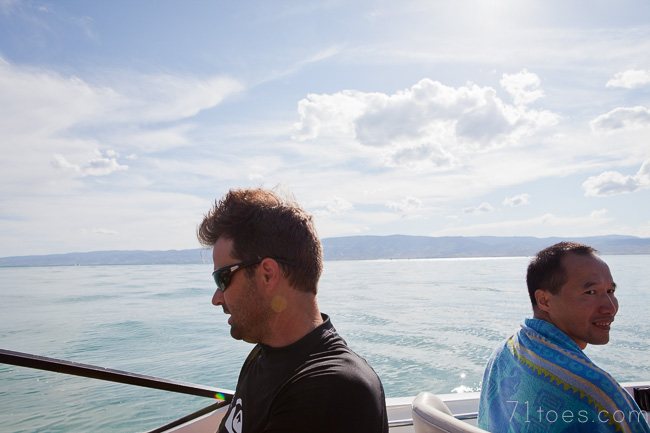 I got the sky… 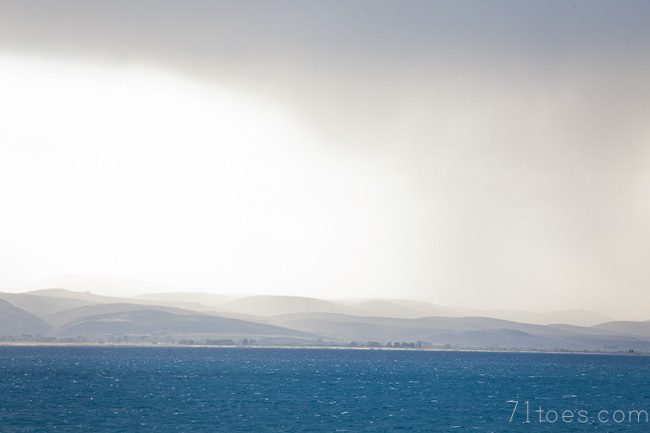 …and the food prep that I love: 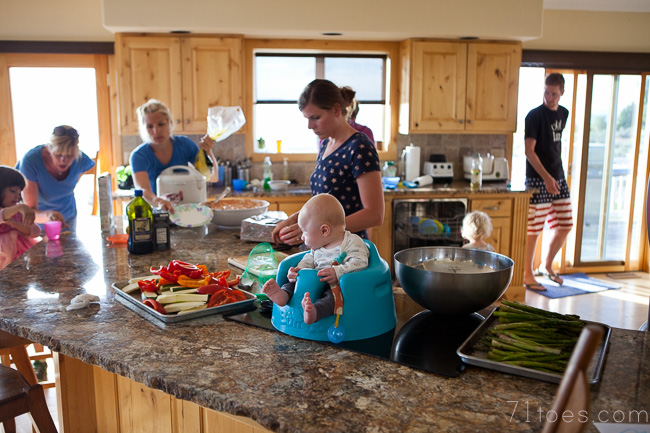 …just not that many of Kevin, dang it!

Oh wait, I did get on-the-ball enough to grab one right before we headed to bed that night after some games and discussions. 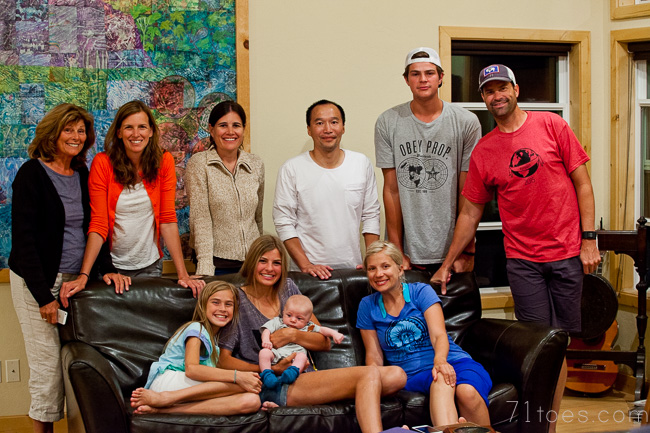 Kevin has met most of our family by now and it was fun to have him there to bask in our favorite place with us.
The next morning we headed to the airport to get back to see those nephews.
En route to the airport we got a notification that our flight was delayed a couple hours.
“That’s ok,” we figured, we had given ourselves plenty of time to get back for the church meeting.

We got to the airport and realized it was another hour delayed.
Then another.
I was so sad at the prospect of missing that farewell/homecoming.
The poor lady at the counter hardly knew what in the world to say to the frenzied woman who could barely talk with tears filling her eyes (me) as I blabbered on to her that we just simply HAD to get home and begged her to put us on any flight that would take us there.  (My severe lack of sleep had caught up to me by then and could hardly see straight).
She did give us some travel vouchers to use in the future, but not much can make up for missing that great meeting.  Our flight touched down in the desert just as that church meeting was wrapping up a half hour away. 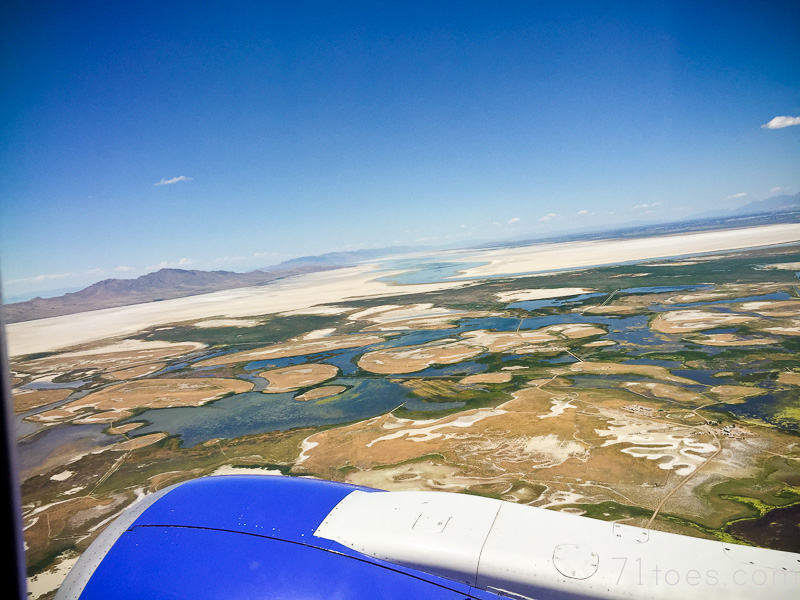 Thankfully we did get there in time for the open house at their house and it was such a fun reunion for all these cousins. 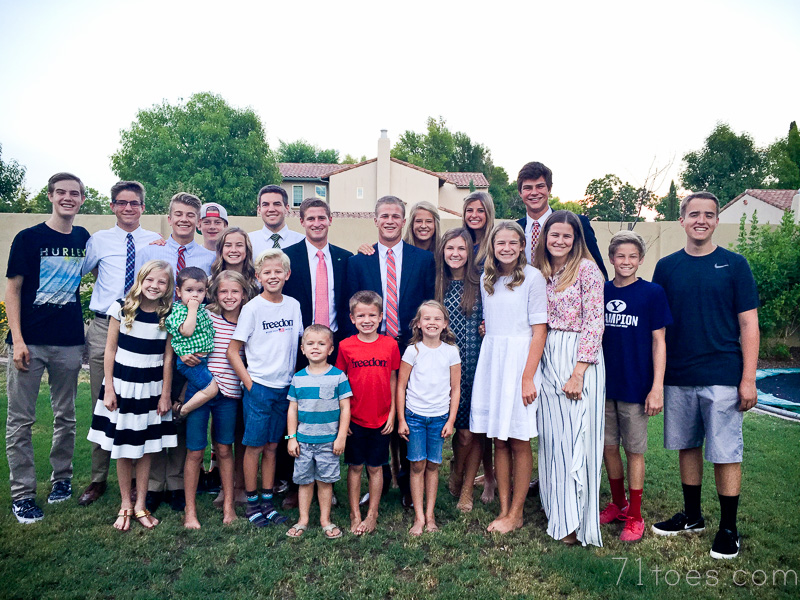 We have since listened to their recorded talks and oh boy those boys are pretty awesome. 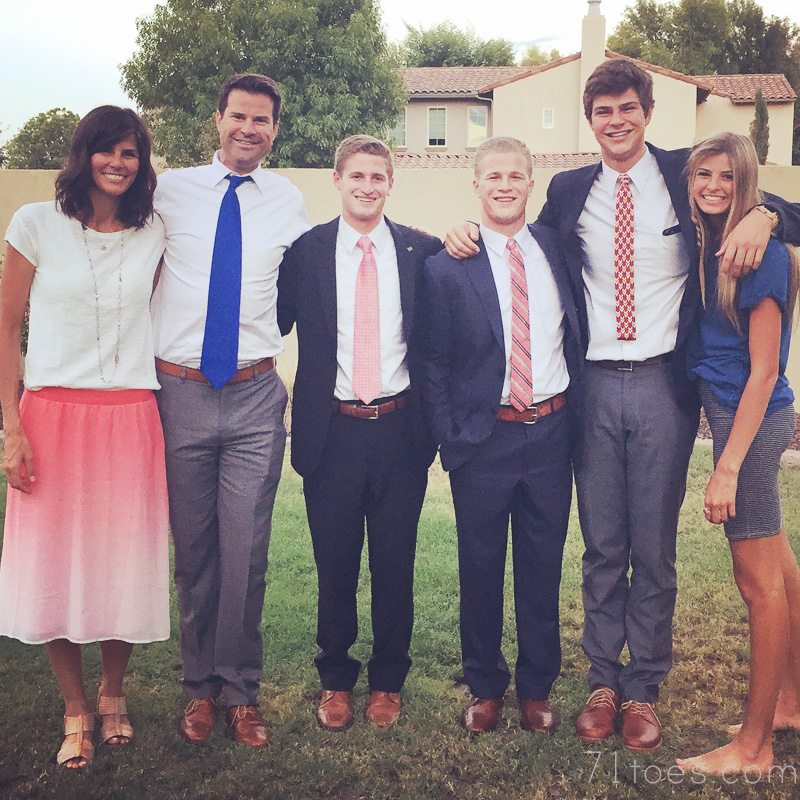 We had “pies and ties” which has become a tradition as we have sent cousins out into the world of missionary work.  Here’s Smith with some of his new spiffiness. 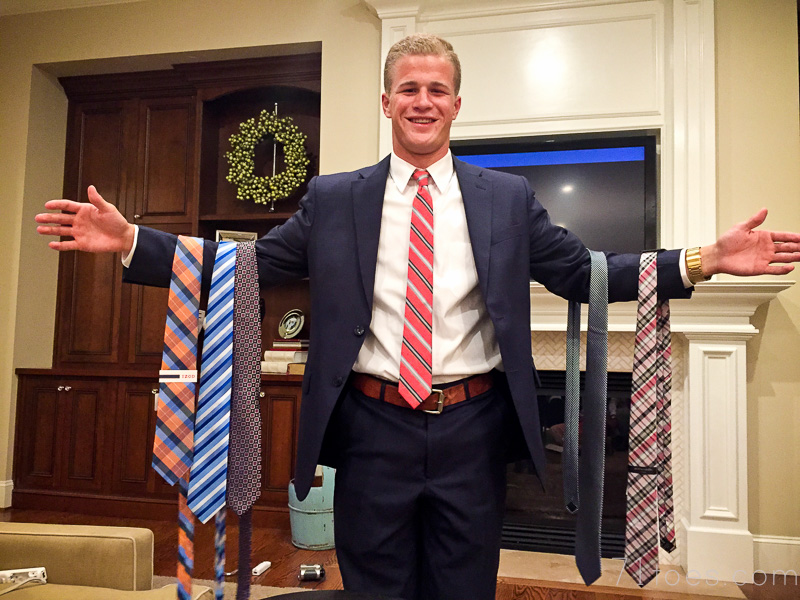 The other thing I came to town for was a really special blessing Max received that afternoon.  It made all the waiting around for flights worth it a hundred times over to hear that wonderful blessing for our boy just as he gets ready to leave the nest. 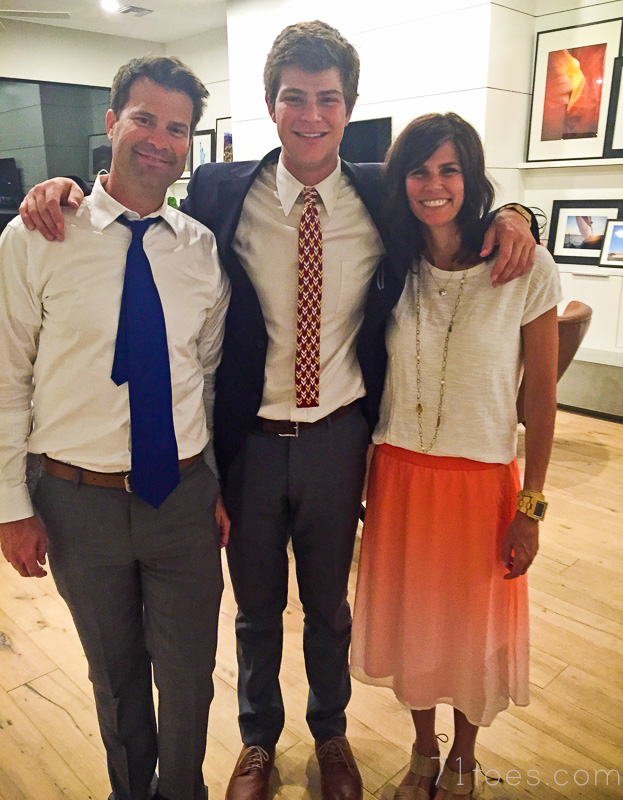 It was a special afternoon that the three of us got to bask in and will never forget.

Elle’s friends were quick to come welcome her home after we got home from the open house.  She had been gone from home for two whole months (didn’t come home between London and Bear Lake), so she was pretty happy to be reunited and to sleep in her own bed that night. 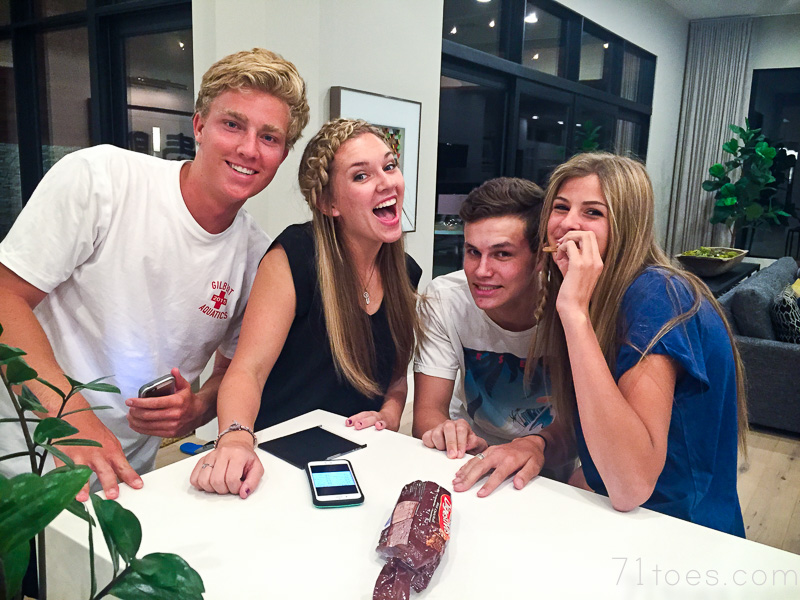 I got some things situated, slept for just over two hours and then headed back to the airport to take Grace to EFY and get back up to my little girls at the lake.

I got to tag along with these cuties on the flight and take them to meet Grace so we could sign them all in down at BYU. 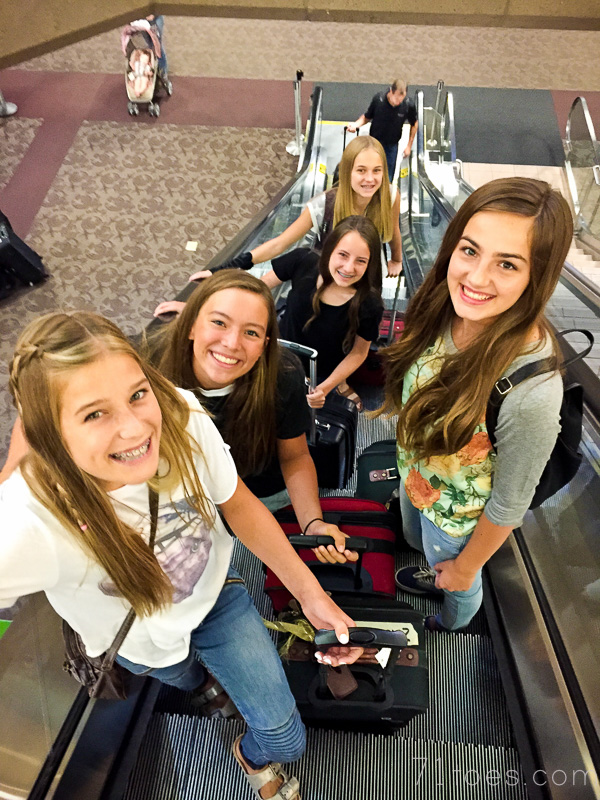 Their excitement was palpable…so fun to get to be with them and all their anticipation for such a fun week that awaited them.

It was a 5:30am flight so we got to watch a gorgeous sunrise. 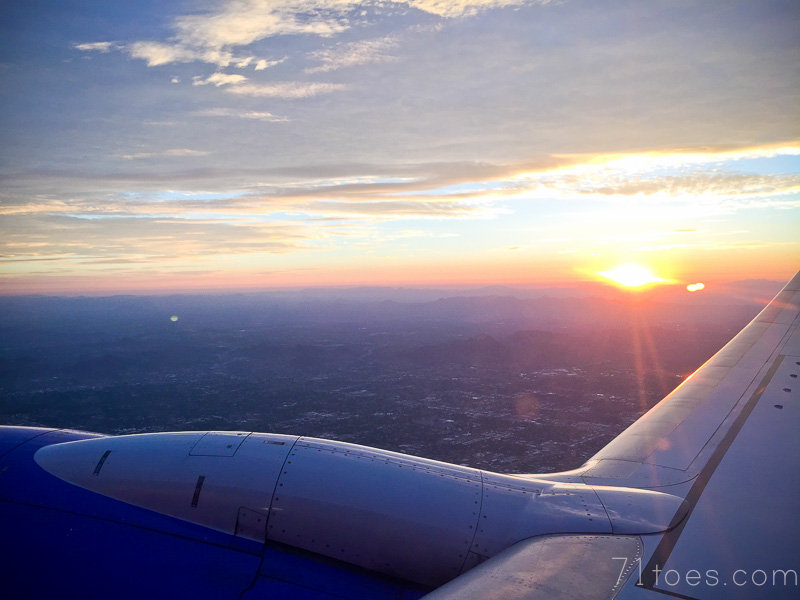 …and quickly got reunited with Grace who had come down to SLC from Bear Lake with my sister’s family. 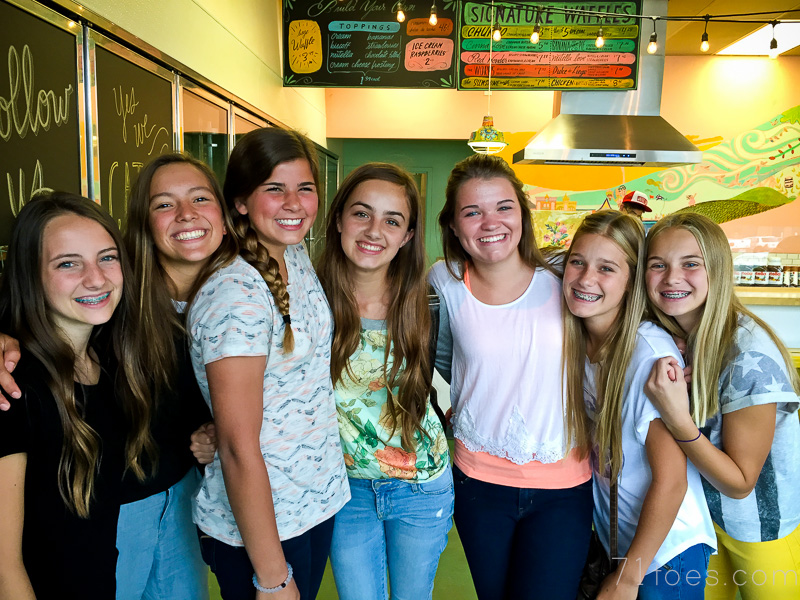 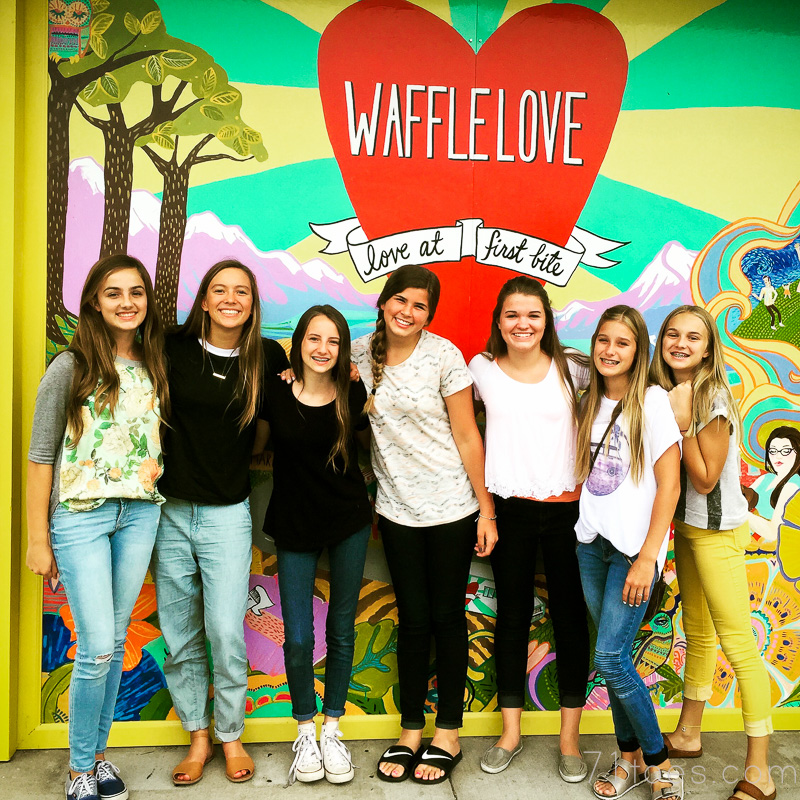 I had never had “Waffle Love” before, but I must admit it was pretty darn good. 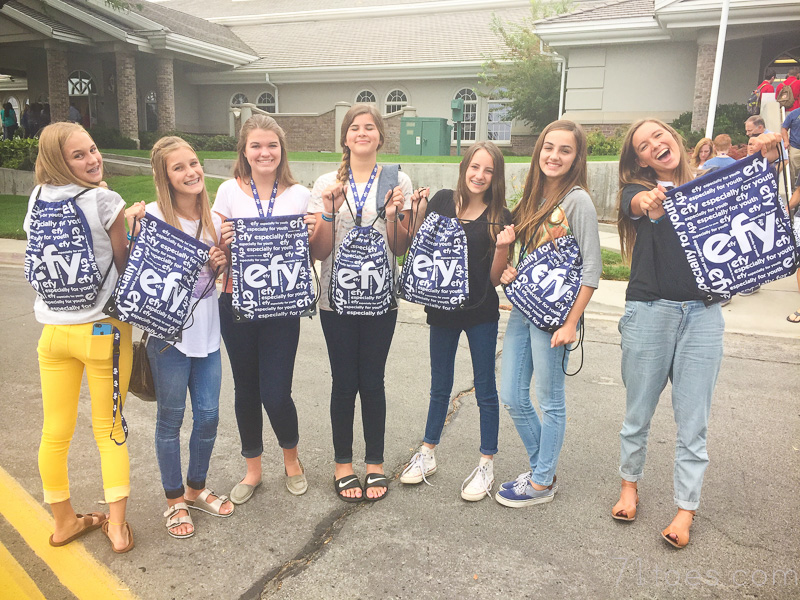 So fun to spend the morning with those girls I adore.

That Grace has some great friends, I tell you!

As they walked away, stomachs filled with waffles and hearts pitter-pattering with anticipation, my own heart swelled up with awe and wonder and gratitude that that Grace of mine got to have that experience. 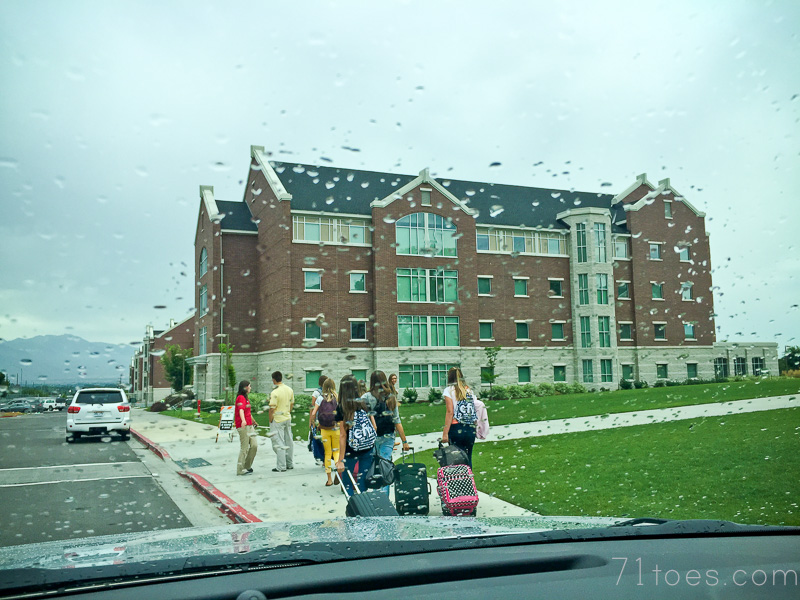 I drove away (after leaving a little piece of my heart with her) with a sweet assurance that she was going to have a good week.

And boy oh boy she sure did.

Then back up to the lake to give my little girls big hugs.

They survived just fine while I was gone 🙂 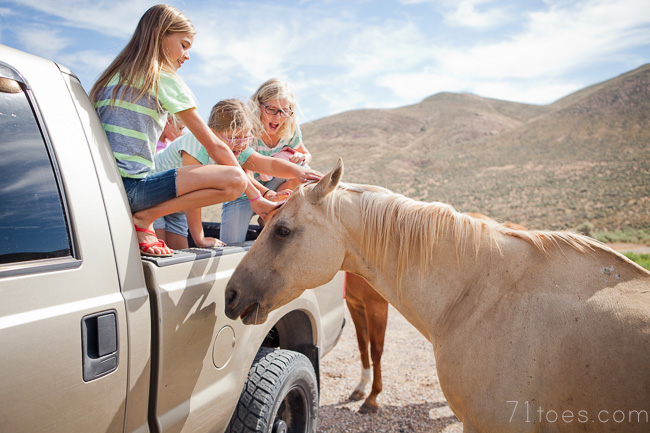 Waffle Love is amazing! They have a food truck here in AZ 🙂

Loved your post, Shawni! So my question is: if you are sending off sister missionaries, would you give them scarves and say "Scarf Up Some Pie"? Just sayin'..