My parents had strict rules about money.  Their best rule, at least in my humble opinion, was the 10-20-70 principle which I could praise all day long (more about that here and here and here).  Their worst?  The don’t-ever-buy-a-new-car idea.  Now, don’t get me wrong, I agree that when you buy a brand new car a huge percentage of it’s value is slashed when you drive it off the showroom floor (or is that just what my Dad engrained into my head after years and years of telling me so??)  But my parents took the don’t-ever-buy-a-new-car rule to a level that meant pouring a lot of money into fixing old clunker cars.  But boy, they sure made for some great adventures. I’m sad I was too little to remember the adventure that came with this one: 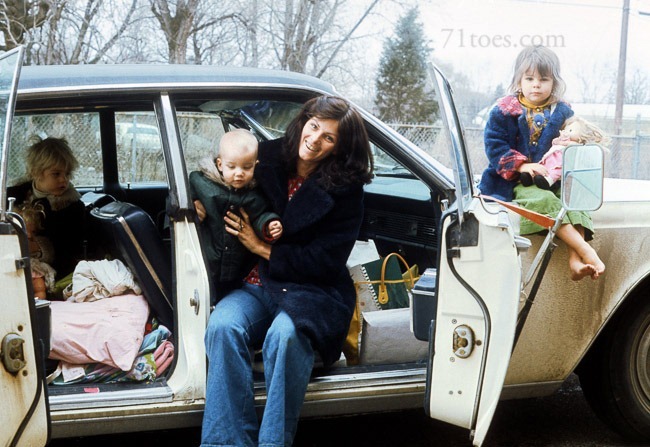 (I think we probably must have lived in that thing from the looks of it.) And I’d love to know more about this one… 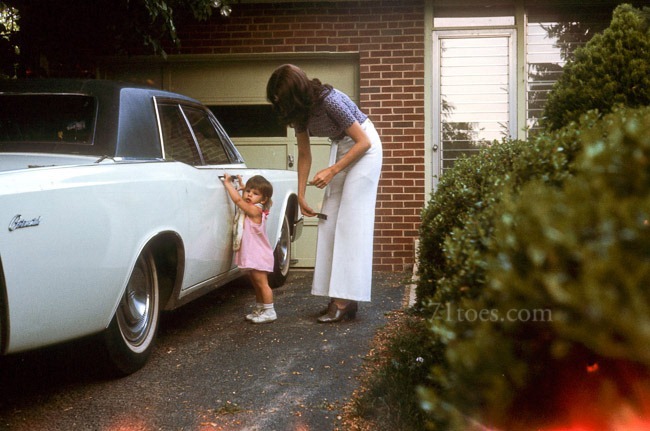 …as well as more about those awesome pants my mom is sporting. But I do remember some wing-dinger stories about the later cars. Like how my sister and I shared an ancient diesel Mercedes when we got our driver’s licenses.  Don’t think glamor, think black smoke coming out of the exhaust as we chugged up hills and chartreuse in color.  (That’s pea-greenish-yellow in case you were wondering.)  That thing was like a tank it was so heavy and I think they felt pretty safe sending us off in it.  And there was the old brown Subaru my friends and I would take four-wheeling at lunch in a construction area during school lunch.  There were the old Montero cars that bit the dust as far as driving legally on streets years and years ago but that still keep chugging taking us all over the beach and to and from cabins at Bear Lake each summer.  And that are filled at all times with at least an inch of sand. There was the car my Dad was so proud to present to my brother when he got home from his mission because it had windshield wipers on the front headlights. Sure, that was a nifty little feature, but it sure didn’t help the car run.  It pretty much died after a couple months because it was old with some serious engine trouble.  (But hey, windshield wipers on the headlights are cool, right?) There was the old, old yellow suburban with three bench seats where my friends and I would all sit across the front bench…five or six of us I swear…no one in the back.  (I am so pleased we actually survived that dumb idea.) Oh man I could fill pages with the adventures, but the car we had that looms largest in my memory was our van.  The one that carried us thousands and thousands miles as a family.  The one where we would “count-off” before we took off on a trip so we could make sure everyone was there.  The one where my parents decided to install a CB radio so they could talk real loud to us and tell us all kinds of things over that intercom as we drove.  My Mom would read us books on that thing (“James and the Giant Peach” was the one I remember the best).  That’s also the one where the air conditioning went out one summer when we were driving to Mexico and three of us were sick with temperatures over 100.  Oh, and that was the trusty car that turned into a bedroom for my little brother when we lived in Oregon.   At one point we got it remodeled.  It went from having narrow benches along the walls and blue and white shag carpet (no seatbelts) to having fold-down couches we could fall asleep on on trips.  Boy howdy did we ever think we had died and gone to heaven when the new and improved van was unveiled.  But the story I remember the very most about that old van was the one where I drove it to high school one day.  After school for some reason my friends and I had some time to kill.  One boy friend was driving it in the school parking lot while we were piled inside with the sliding door wide open while a couple boys decided to try “surfing” on the roof. Wouldn’t you know that my Dad happened to be driving past the school at the exact same moment.  I remember so vividly what happened next.  All our fun died down lickity-split when we saw him coming.  He drove up, looked at me as disappointed as could be and asked for the keys.  I sheepishly handed them over.  Then he drove away.  Not another word was said, and I have no idea how we all ended up getting home, but boy did I ever learn my lesson. Yes, those cars were sure an adventure.  But I’m still kind of biased to invest in reliable ones these days.

nostalgia and cherishing each other

My family has a proud tradition of making cars last a good twenty years. My parents even shipped one across the Atlantic and kept driving a right-hand-drive car on our left-hand-drive roads for another ten years. I'm in my mid 40s and have only ever owned two cars – my current one started as a beautiful shiny new company car and is now is a ancient wreck 🙂 Saves a fortune though…

… but the first time it lets me down IT'S GONE! Life's too short to be stuck in the snow with kids. (pressed publish too soon).

Glad to know that even your parents had issues with kids, well being kids. I always worry about the teen years in raising my 3 girls–guess we all did stupid stuff and we can just do our best and pray that they will be ok! Thanks as always for sharing!!

Your family seriously has the best stories and adventures! Your parents are so awesome and quirky and FUN!

Shawns, I swear I was just thinking about that van surfing the other day and your dad walking up at the right moment. I can't believe how dumb we were and that we all survived. Please don't let my kids be so dumb. You did forget to mention how awesome it was driving that car through the dips going way too fast. Your cars were awesome and were my main mode of transportation to and from high school most days. Love the suburban, love the chartreuse mercedes, and loved the van. Thank heaven we are all still alive!

Shawni, I love reading about your life story growing up. Such adventures!

My husband recently took a job teaching in a village in rural Alaska, and so began our adventure, with three sons in tow.

I often wonder what they will think of the craziness when they are older, so it's been fun to follow your journey back to the adventures you had.

This reminded me of so many of our car adventures growing up. We drove a lovely mustard yellow and brown suburban. It was just expected that the car would break down on trips. In fact that is how we recall the trips now, by where we waited while the car was fixed.

The cars we have while growing up are definitely ingrained in our memories. I so wish I had a photo of the large, old mail truck that my mother bought and painted yellow with flowers on it. It had no seats (except for the drivers seat) and no seat belts. It had the steering wheel on the opposite side, it was an English mail truck. We drove that all over Hawaii, where we lived at the time. I remember asking my mother to drop us off several blocks from the front of the school. She never did.

I can really see Lucy in you, in this picture of you in the car x

We had 8 kids, we also always had old cars, and one summer my dad came home with a cream van with a maroon stripe around the middle. It was promptly named the hot dog van.:) Had plush maroon seats with curtain dividers and lights above the seats! Imagine our surprise when arriving at our family reunion we saw that 2 of our cousins families had also purchased the same van!

Ahhh, the days before carseats! I remember long road trips spent lying in the back of our station wagon. It makes me wonder if families tend to be smaller nowadays since there are so many seatbelts/carseats to buckle! I second the comment that Lucy looks a lot like you! So cute.

I can relate! One time this guy I was on a date with in college said, and I quote, "wow, you must have a real good self esteem to drive a car like that." I decided to take it as a compliment.